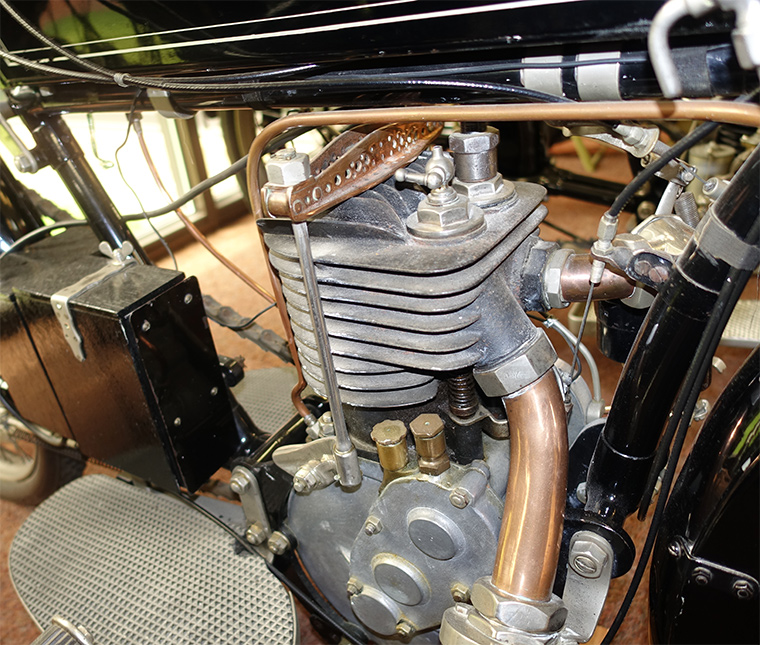 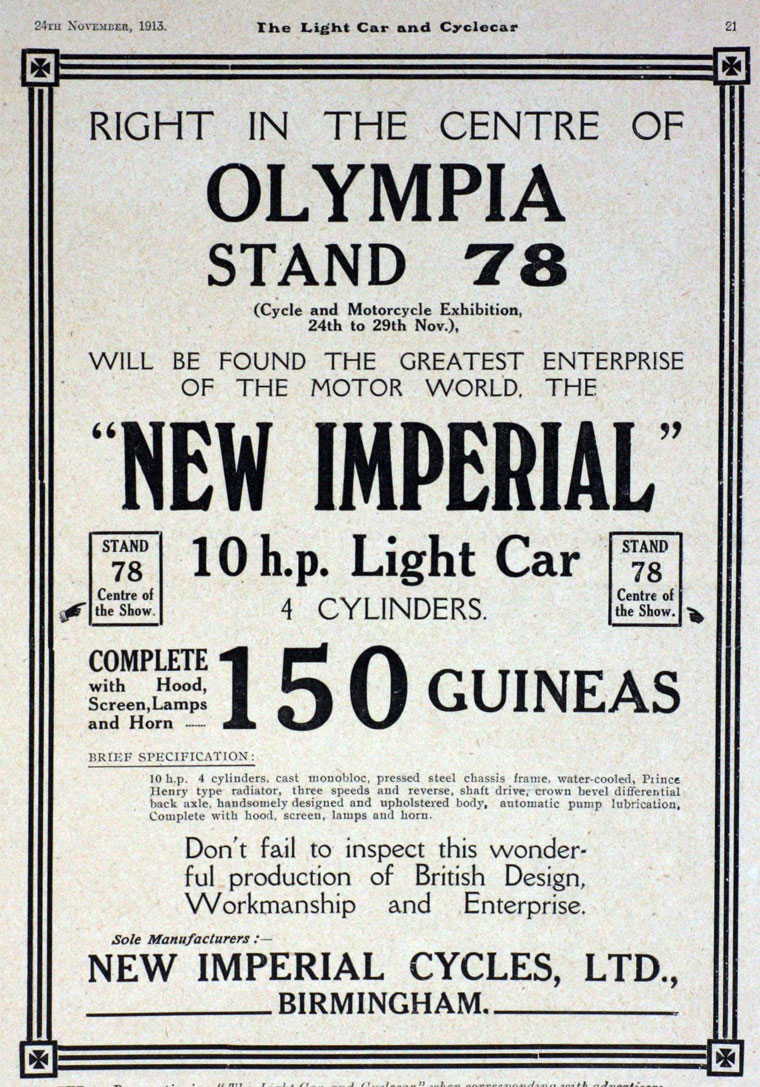 Exhibit at the Brooklands Museum. 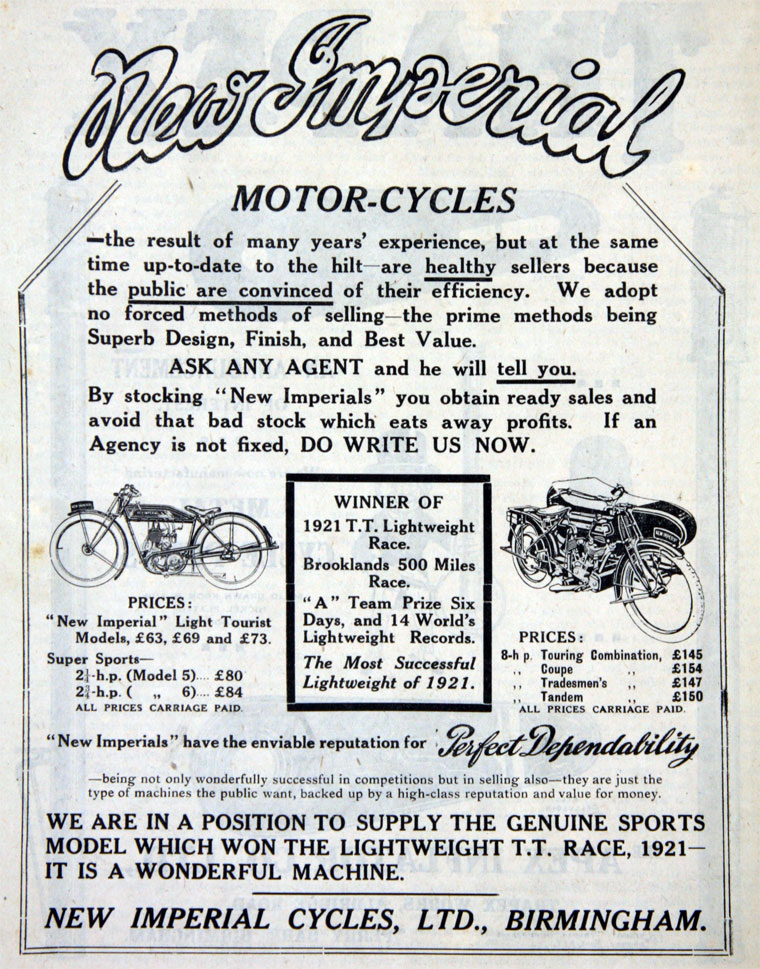 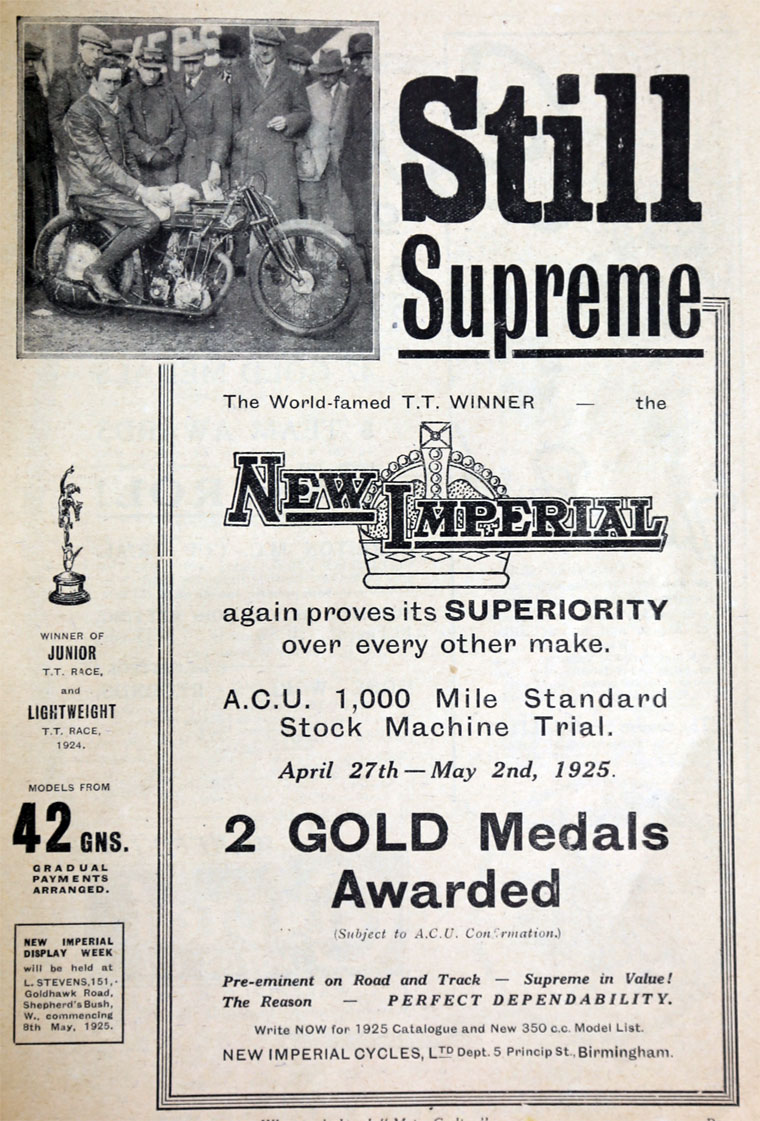 The history of New Imperial goes back to the early days of the bicycle industry in Birmingham.

1901 It is said that Downes created Imperial Cycle Co in 1901, but no official record of the earliest company formation has been found.

1901 Imperial made their first motorcycle. The engine was mounted forward of the handlebars with a leather belt driving the front wheel. It failed to sell.

1901 a "New Imperial" Motor Cycle was exhibited at the "Stanley Show," London.

1907 The production of Imperial Motor Cycles commenced on a small scale, and this increased steadily.

1907 SHAREHOLDERS of the Imperial Cycle Company Ltd were given notice that, in accordance with the Companies Act, 1862, the Final Extraordinary General Meeting for the dissolution of this Company, confirming the sale of its assets to the New Imperial Cycle Co. Limited, as per Special Resolution passed on December 13th, 1907, and confirmed on 30th December, 1907, will be held at Lower Loveday - street, Birmingham, on Monday, February 8th, 1909.[1]

1908 Stanley Show: London showroom/offices at 62 Holborn Viaduct recently opened. New model for 1909 was the "Girplex" with a duplex cross frame. The company did all its business through the trade, supplying machines under the Imperial name or with the agent's own transfer.

1910 A motorbike went into production using a 293cc JAP engine.

1911 "... pursuant to section 188 of the Companies (Consolidation) Act, 1908, ... a Meeting of the creditors of the New Imperial Cycle Company Limited will be held at the Grand Hotel, Colmore-row, Birmingham, on Monday, the 16th day of October, 1911, at twelve o'clock in the forenoon, for the purposes provided for in the said section"[2], namely voluntary liquidation of the company.

1912 The registration of a new company, New Imperial Motors, is recorded; the company offered a range of three motorcycles, all using JAP engines; it was based in Loveday Street, Birmingham.

WWI Made motorcycles for the Russian, American and British armies, as well as Mills bombs and other munitions.

1927 New Imperial Motors (1927) Ltd was incorporated as a public company, which continued the business.

Further information can be found at the New Imperial Owners' Association web site. [1]