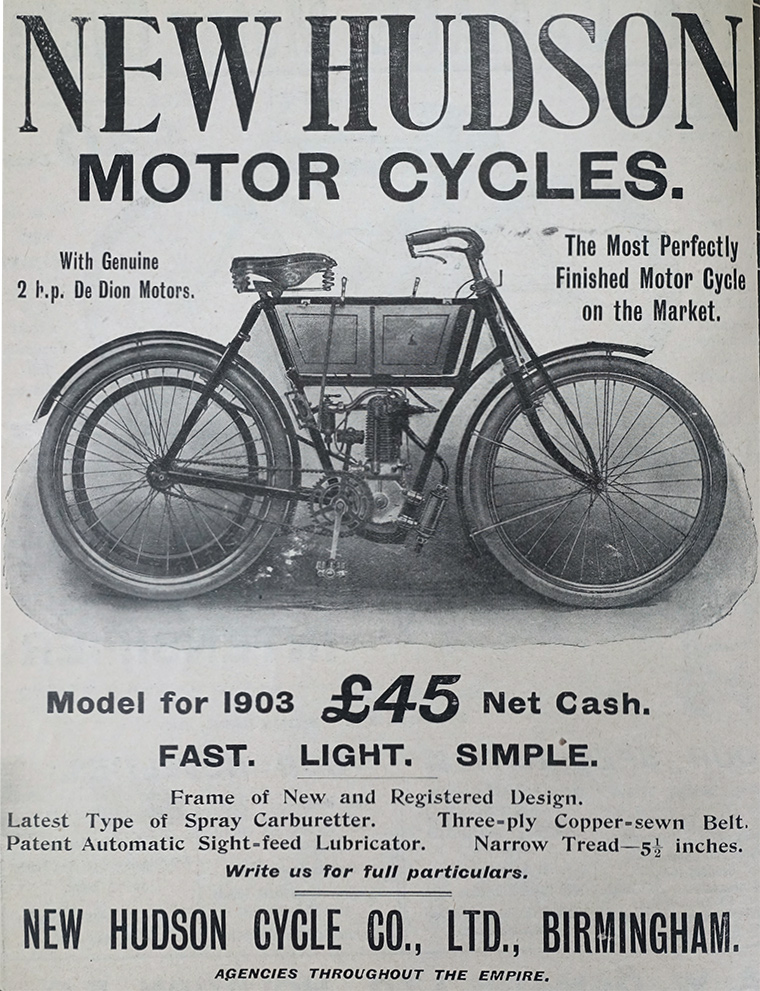 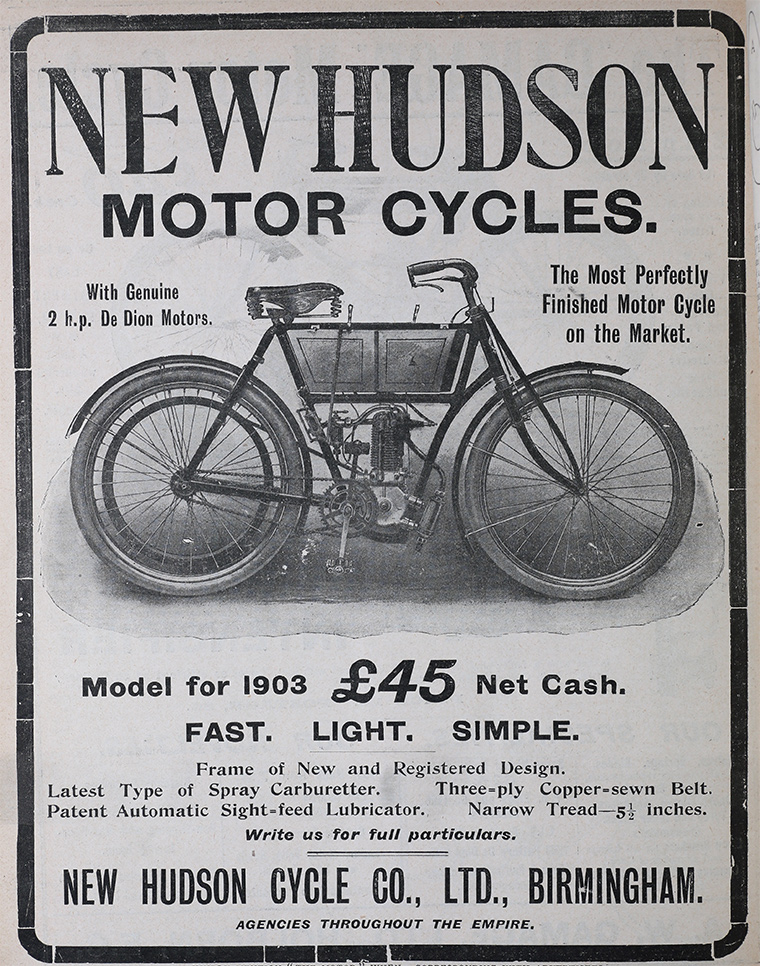 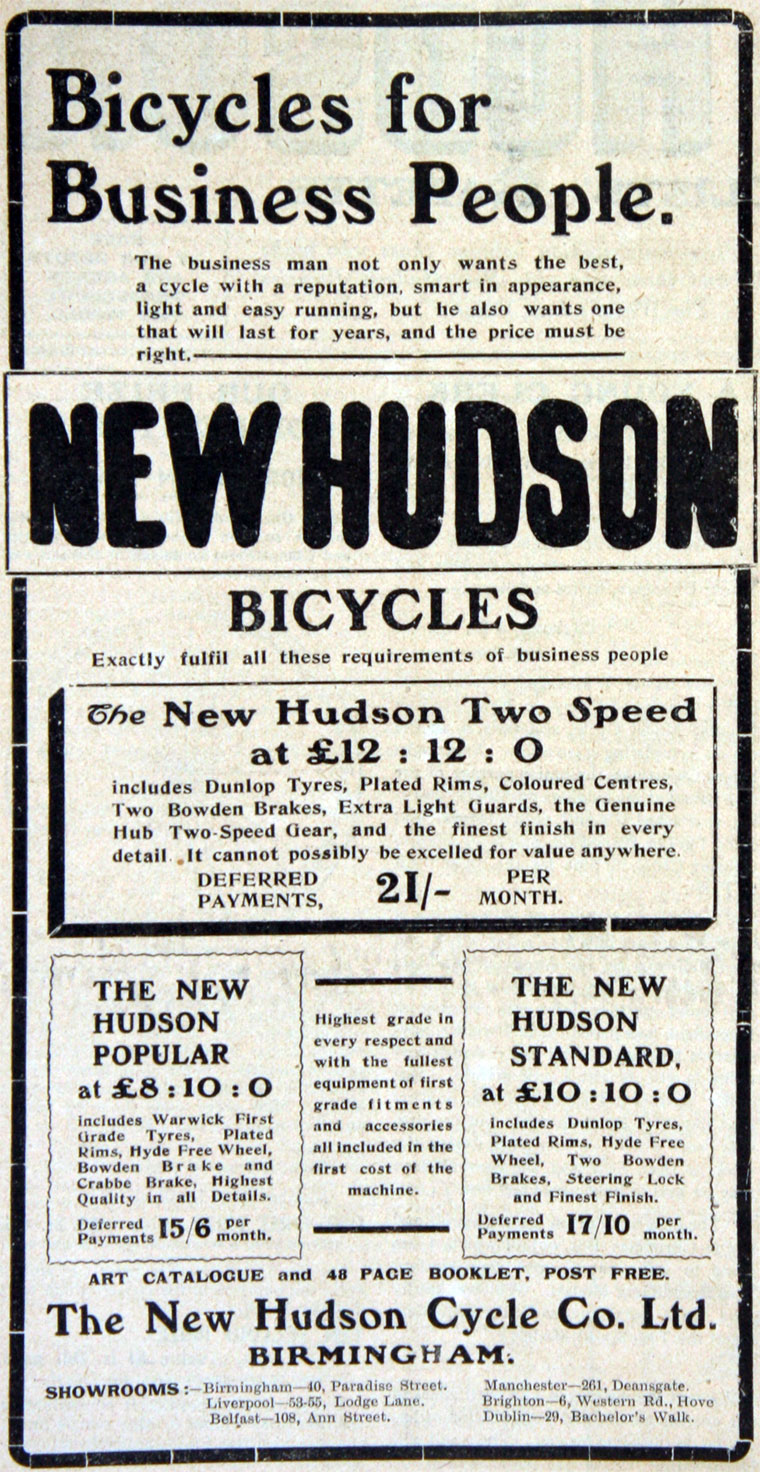 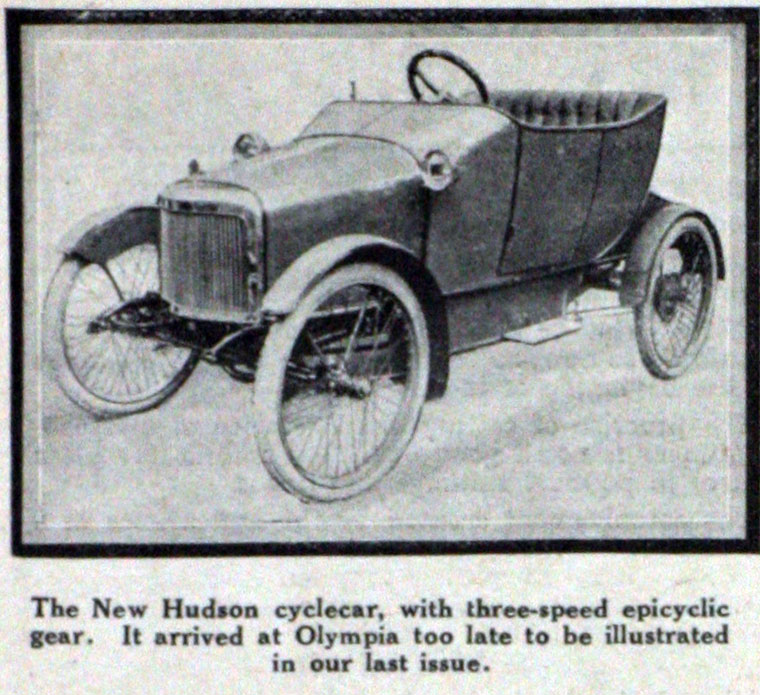 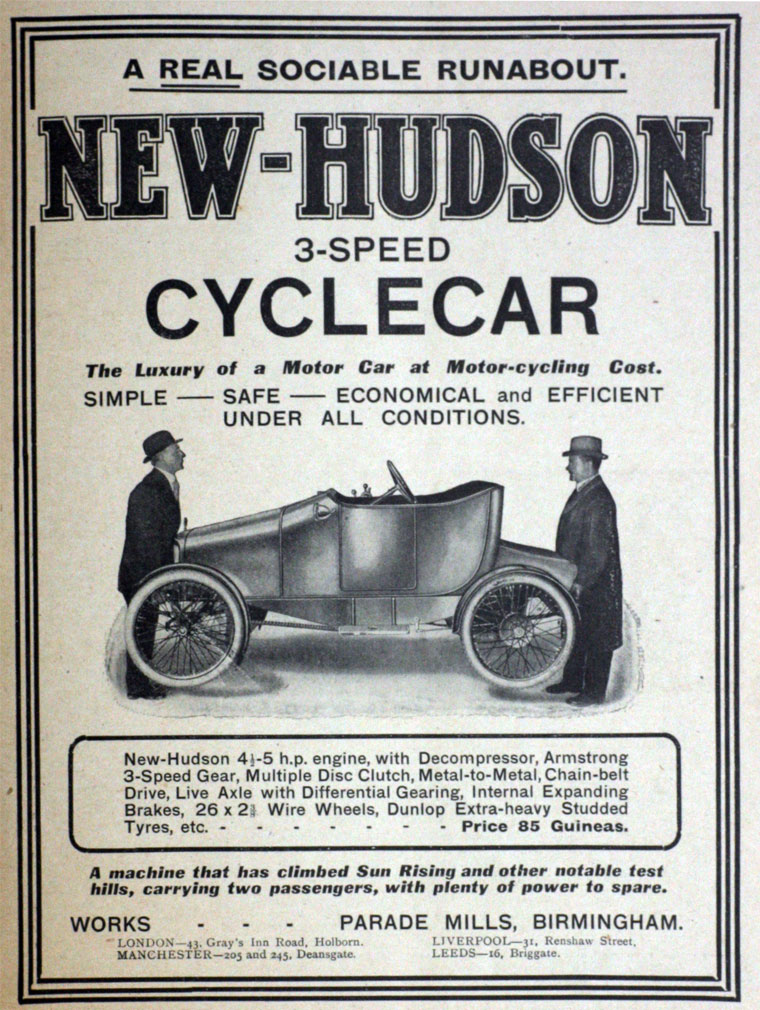 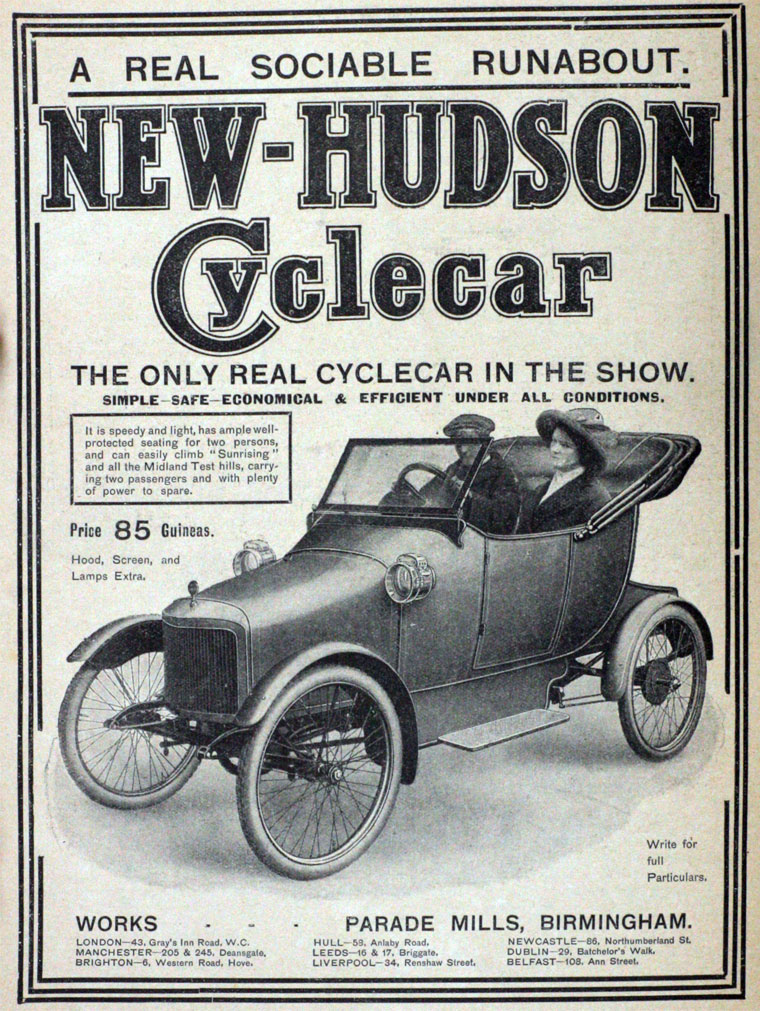 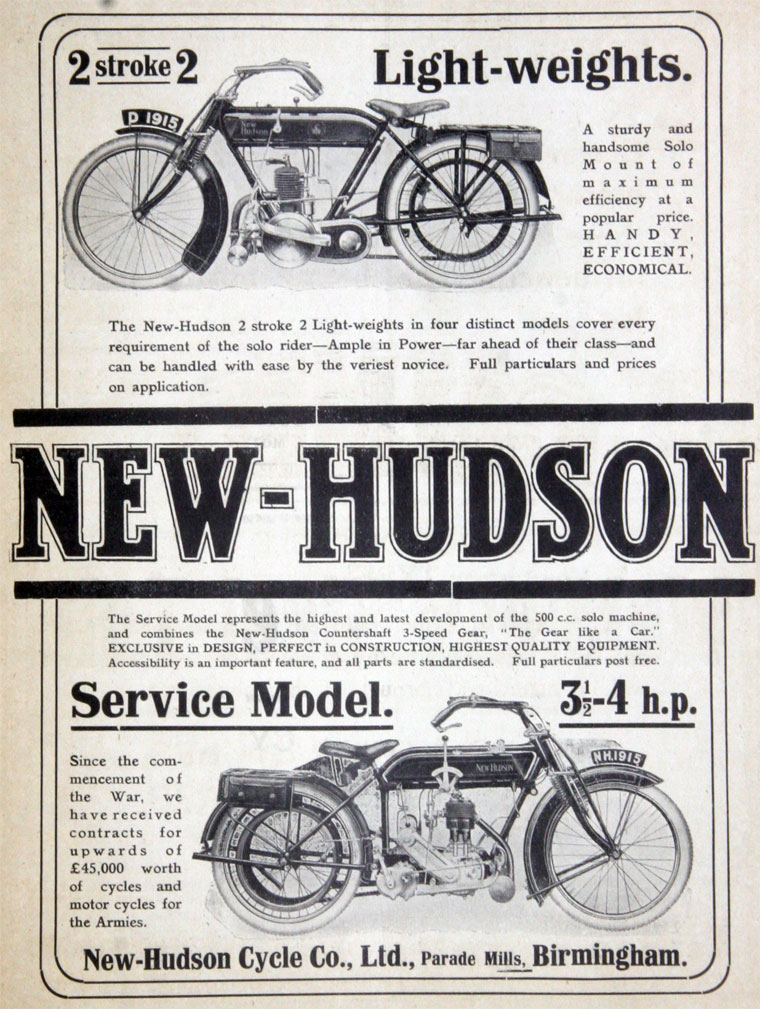 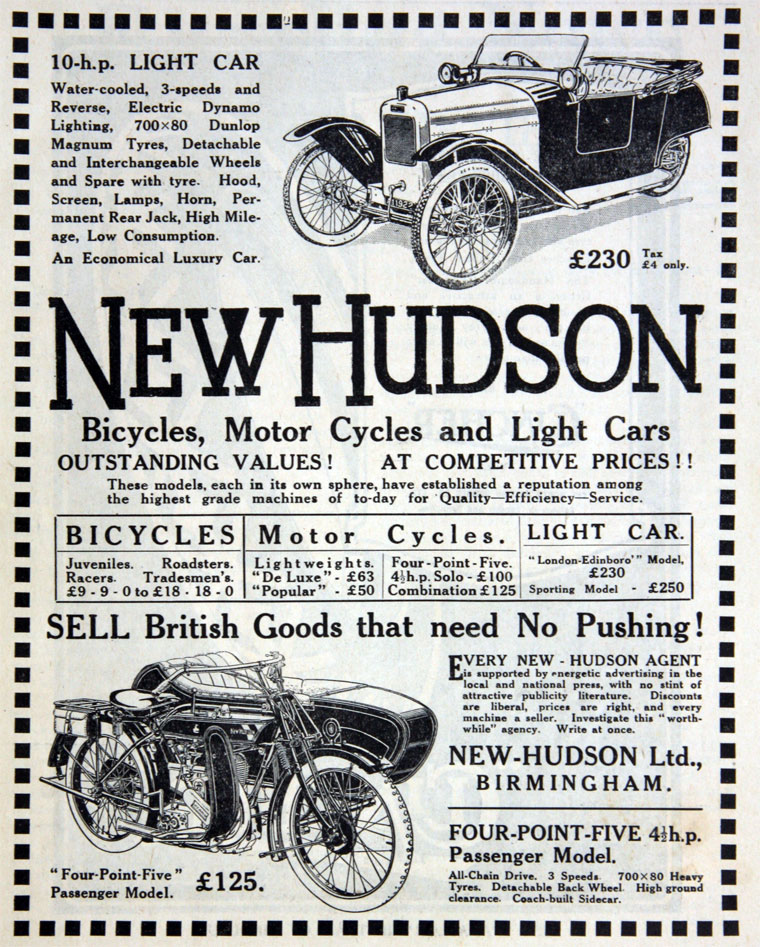 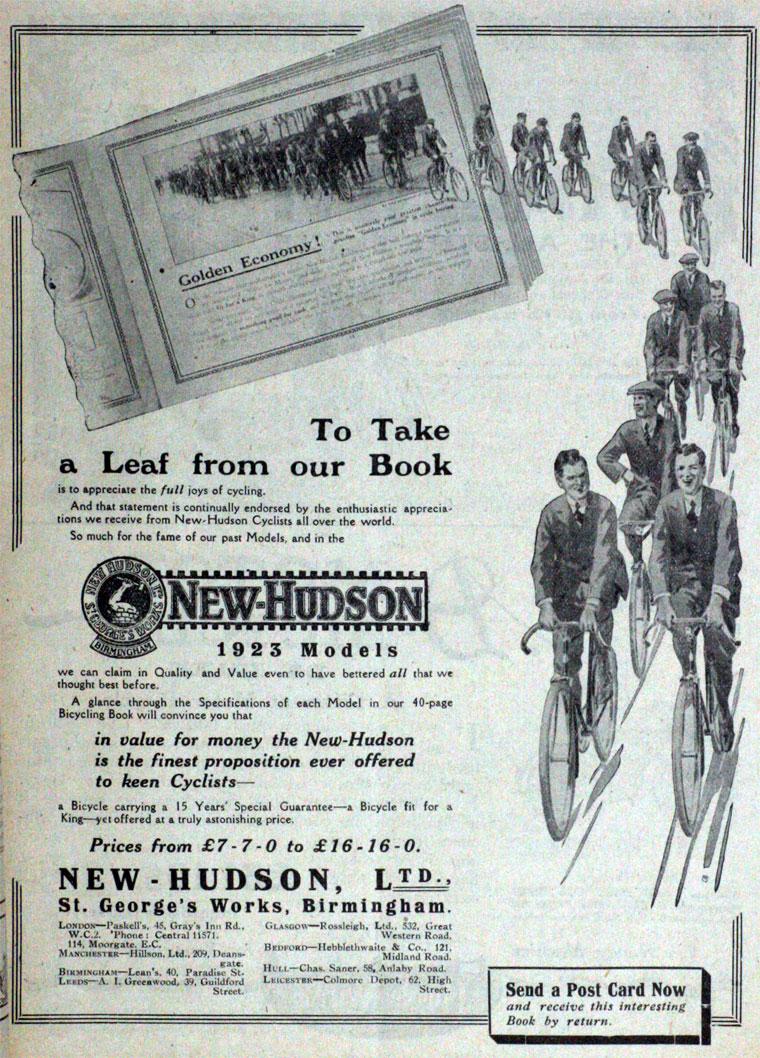 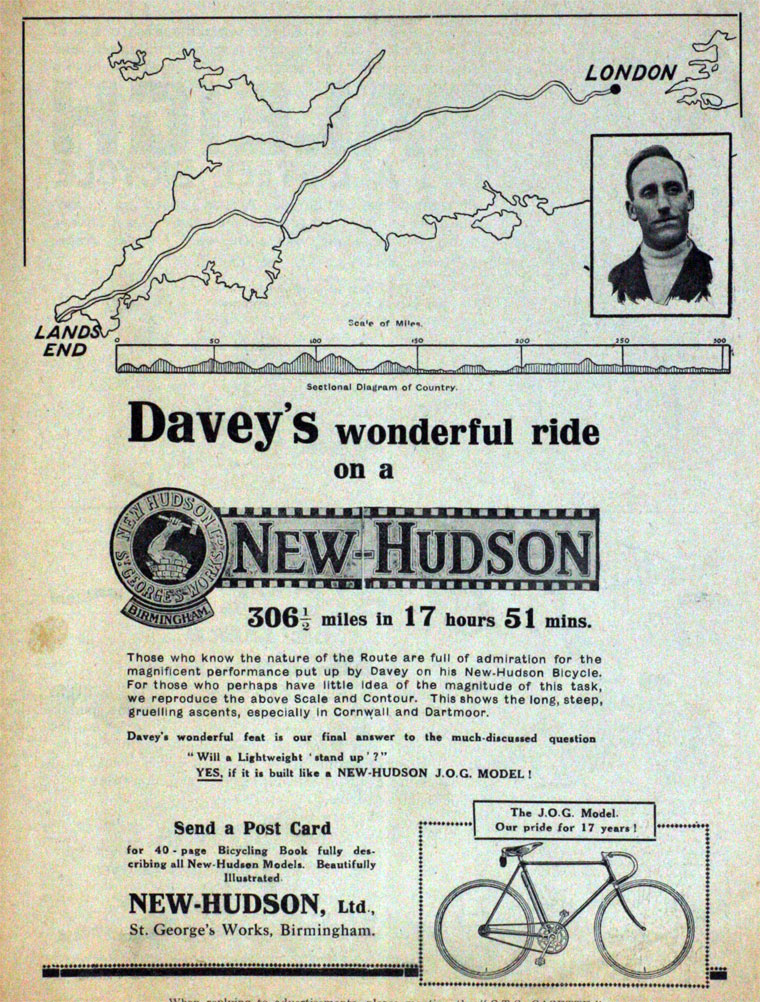 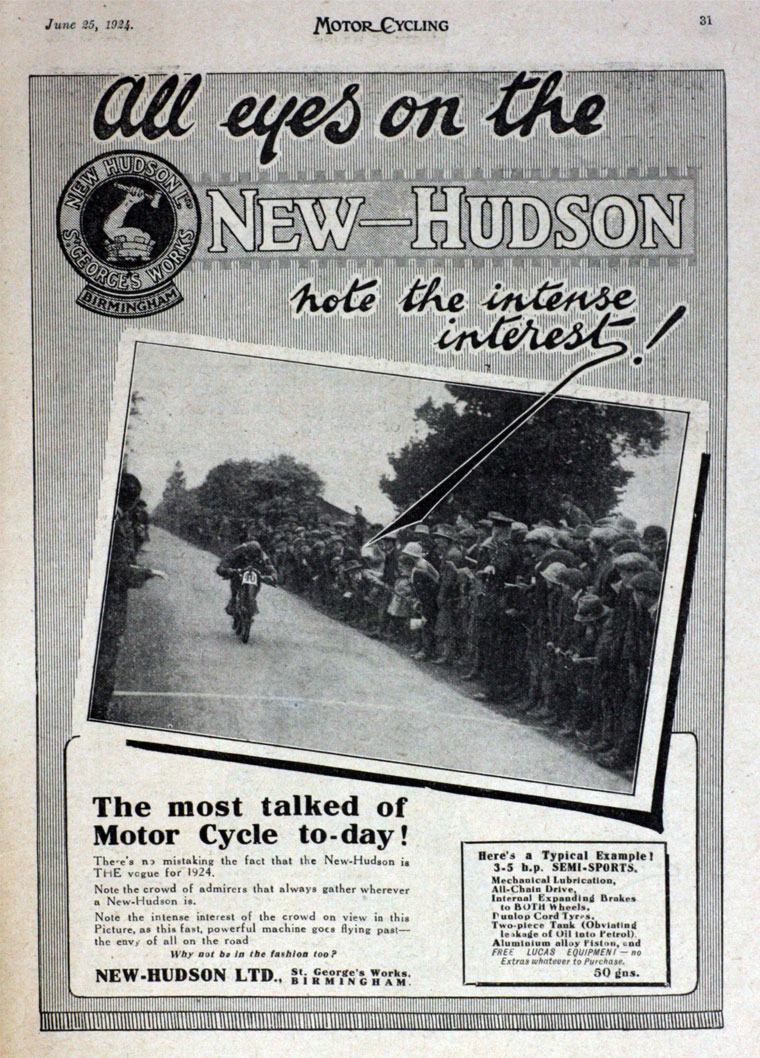 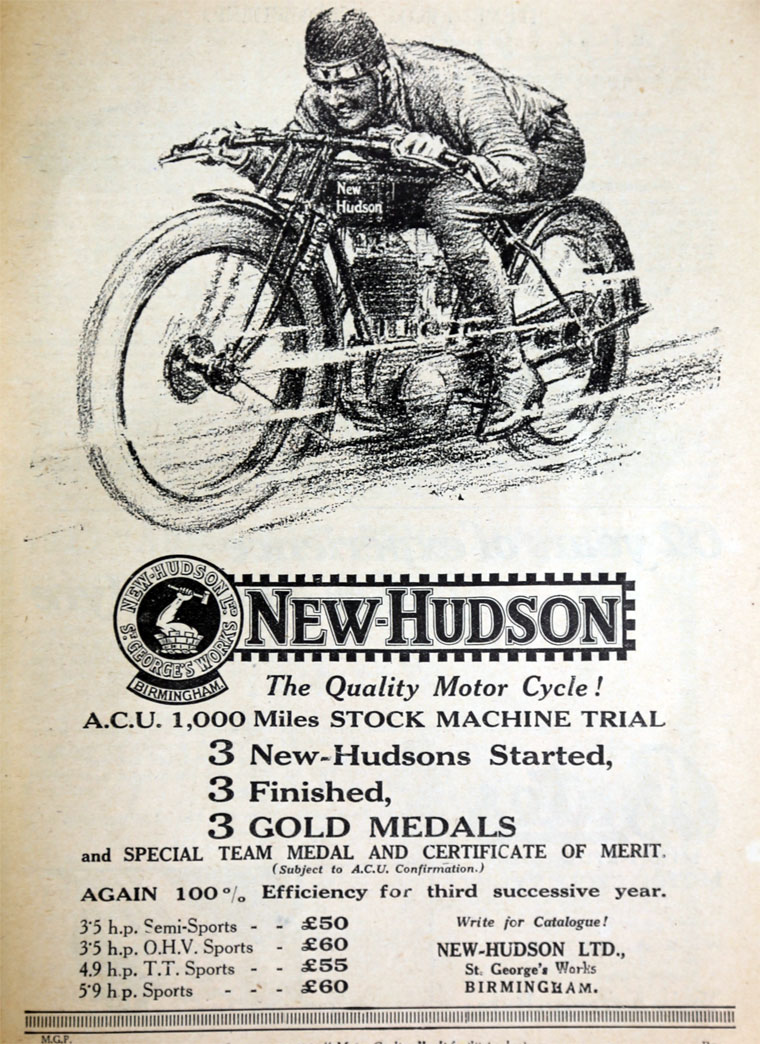 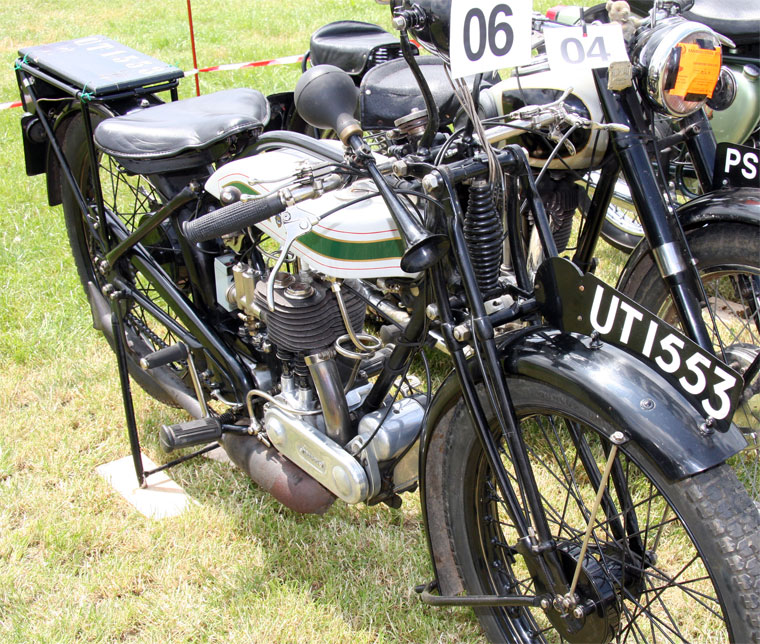 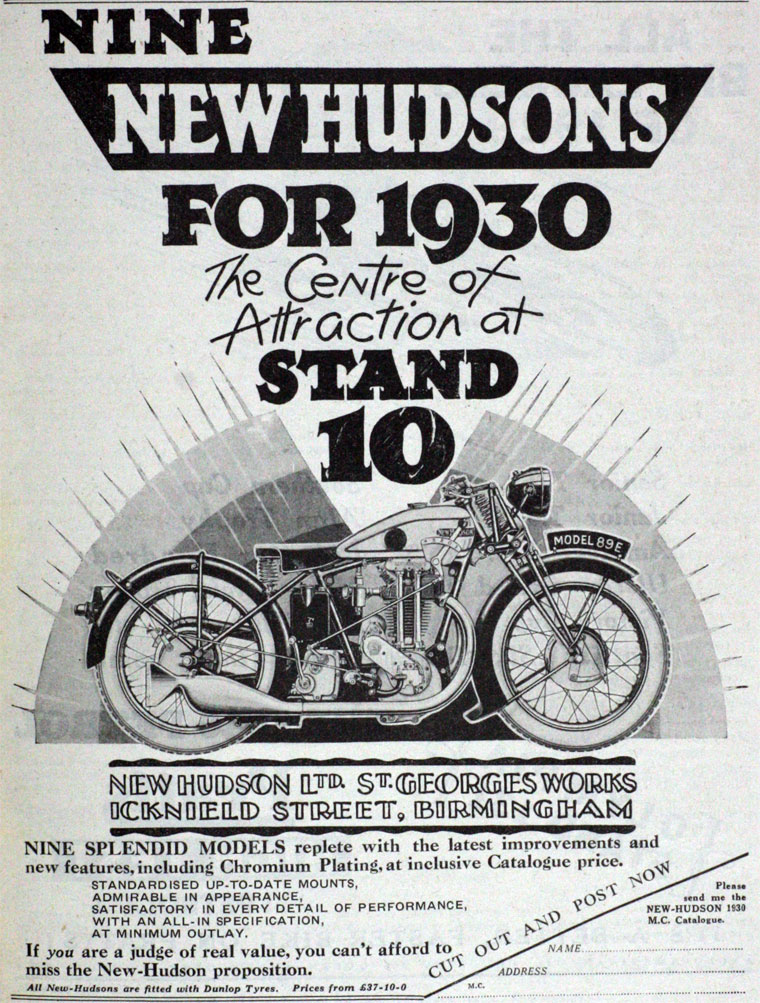 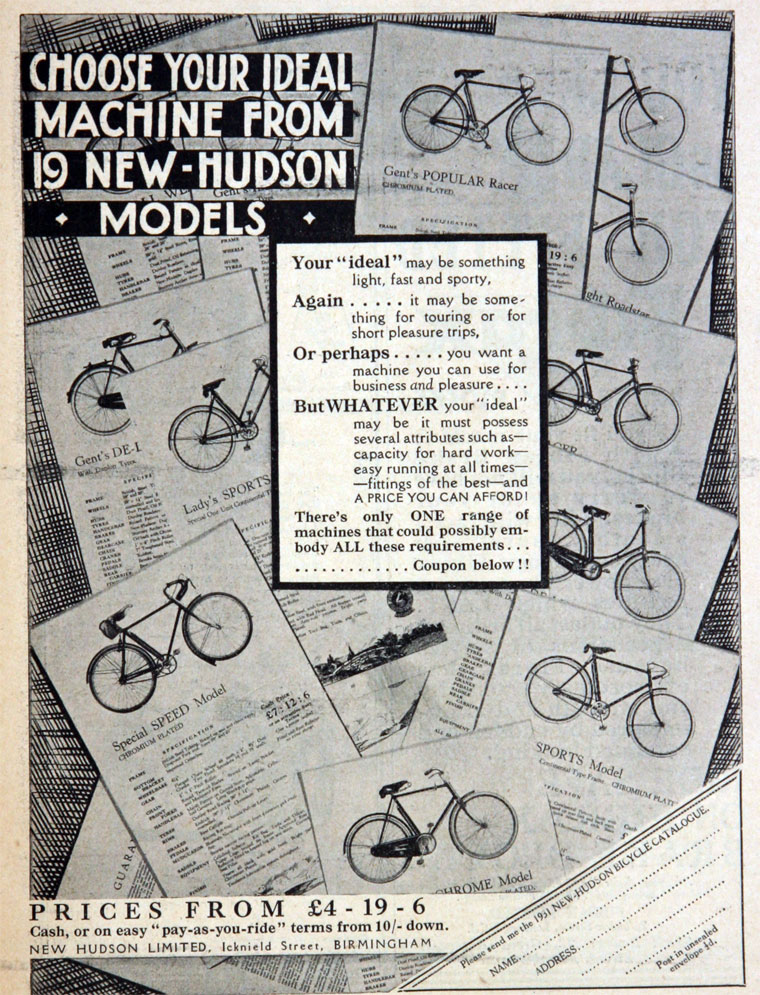 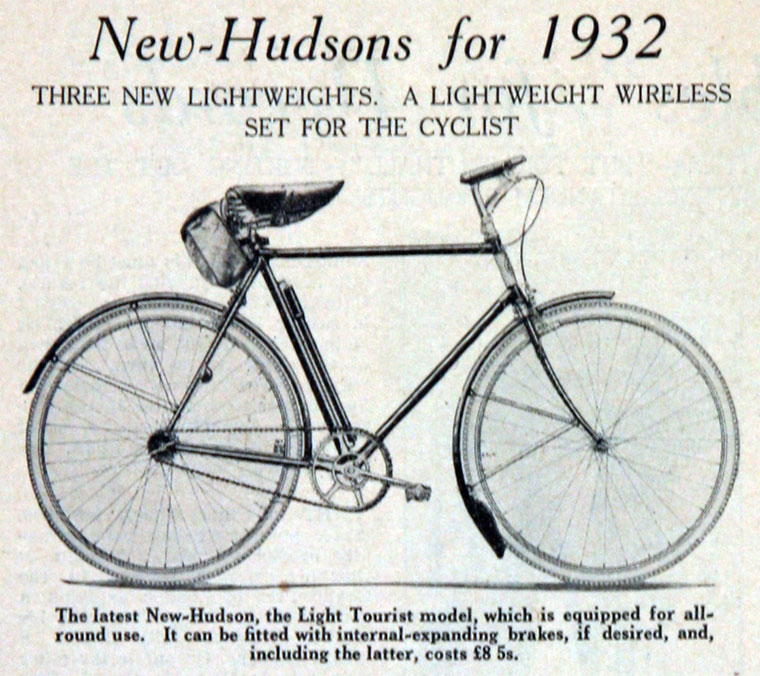 1934. Exhibit at the Museum of Lincolnshire Life. 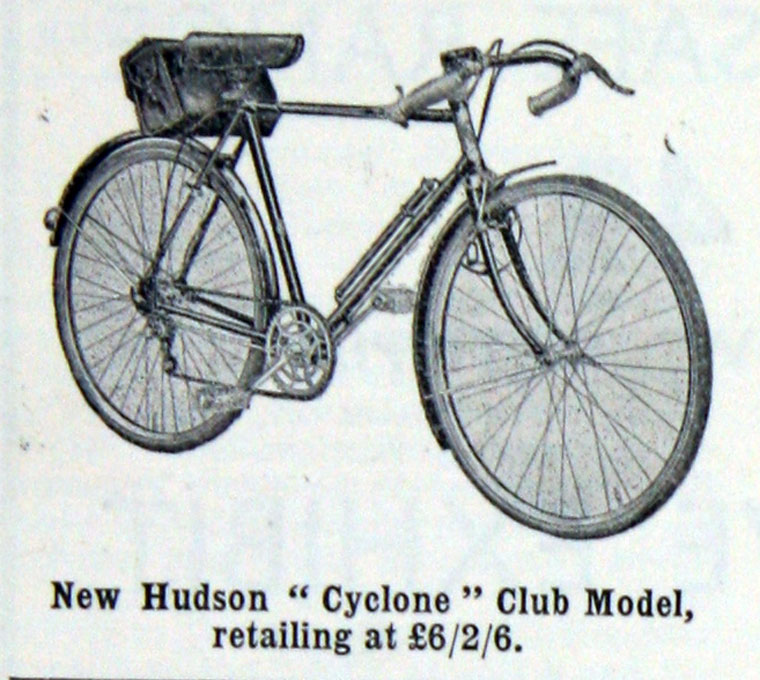 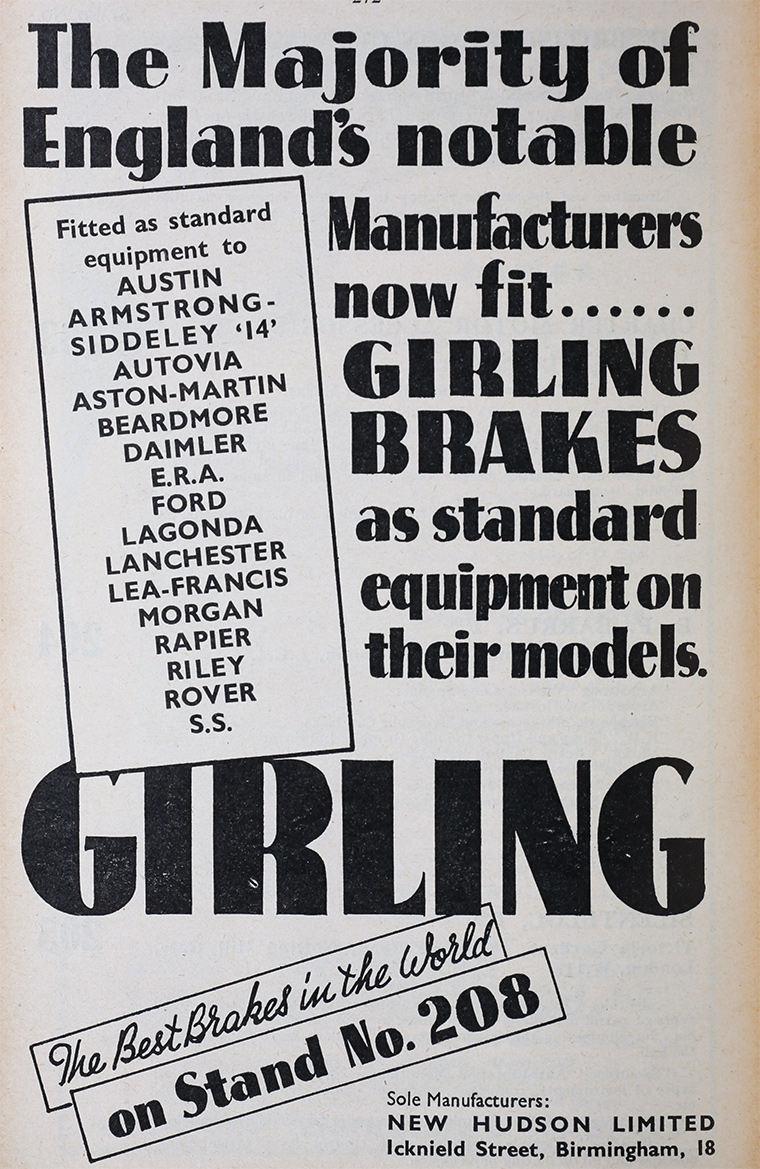 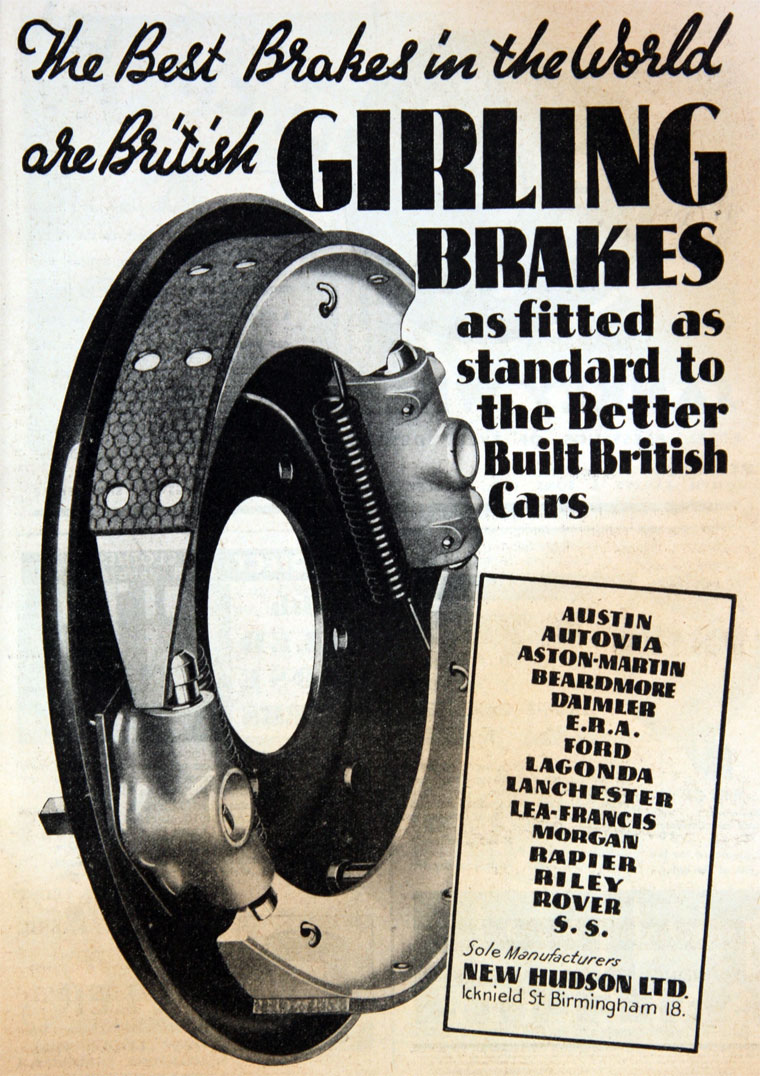 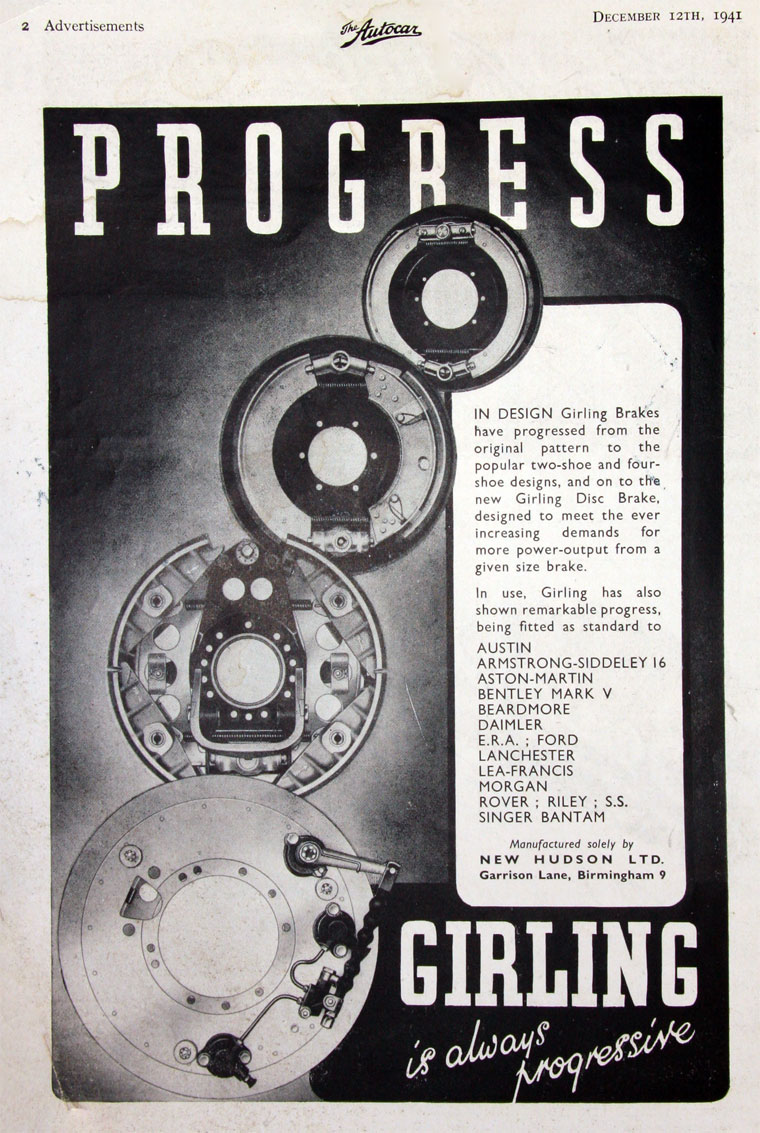 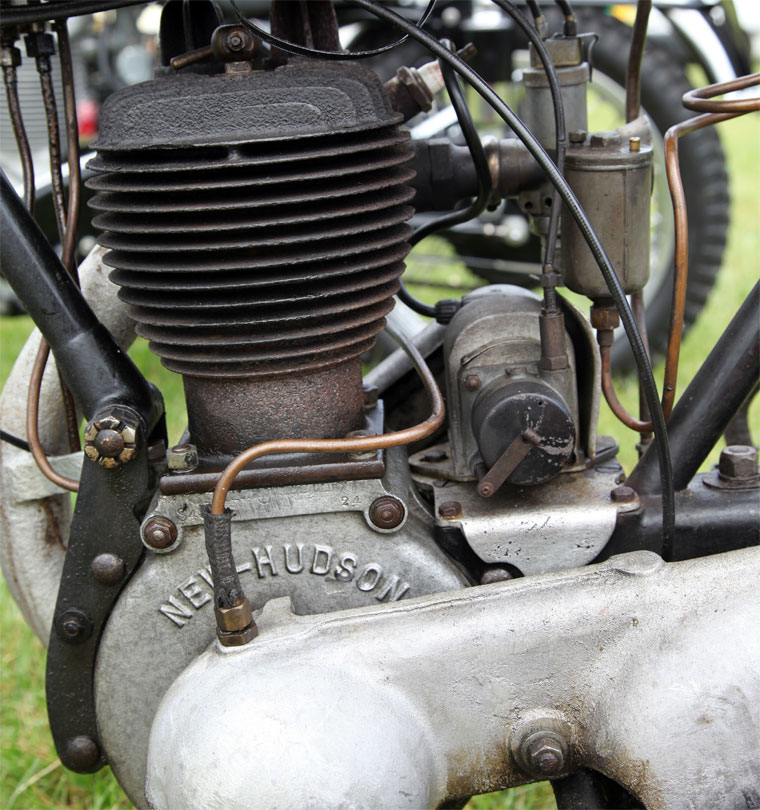 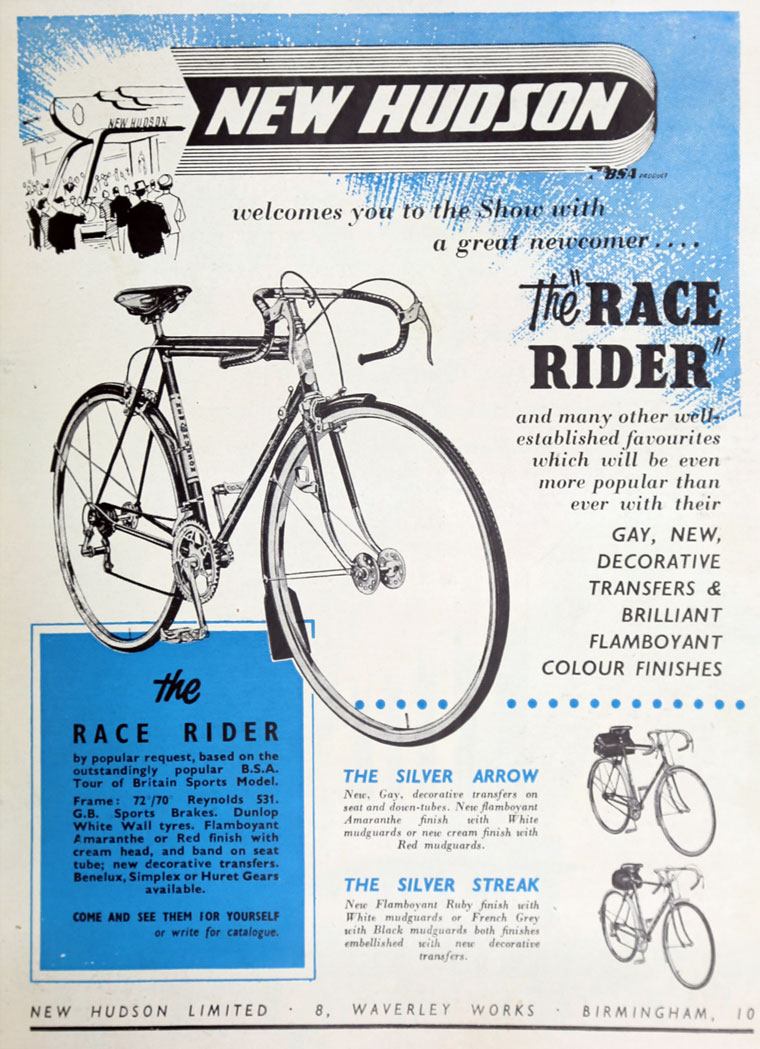 1890 Hudson Bicycles may have been a precursor company

1903 The first motorcycle was produced. It was an early primitive fitted with a De Dion engine. At that time the firm was based in Icknield Street, Birmingham, but they soon left the powered market.

1913 The JAP engines were dropped; instead used their own 2.75hp motor.

Post-WWI. Only the two-stroke engine was listed.

1927 A New Hudson came second in the Senior TT and records were set at Brooklands.

1929 the company purchased the Girling brake patent from the inventor Albert Girling, to supply brake systems to Ford, Austin, Rover and Riley

1931 The range was revised so that engines were inclined with partial enclosure.

1932 The 'Depression' years were hard for all concerned. The inclined engines had had their heyday, enclosure was not popular and the new engines had problems.

1933 Having hit a low spot, the company ceased the production of motorcycles and concentrated on making Girling brakes.

1940 The name of New Hudson reappeared on an autocycle powered by a 98cc Villiers engine.

1943 The Girling interests were sold to Lucas and the company went back to bicycles making a range of autocycles or lightweight motorcycles - see New Hudson Auto-Cycles.

c.1946 Acquired by BSA[11]. Autocycle continued until the end of the decade.

1949 The autocycle was revised to use the Villiers 99cc 2F unit, and continued for several years.

1956 During that year the machine was completely restyled and ran on in that form.

In 1930, the Ixion name re-surfaced when New Hudson failed to sell a large batch of 249cc sv models that had been produced to capitalize on public interest. The BSA Round Tank had been so successful that there were, by 1929, too many others on the market, many of which lacked the staying-power of the BSA

By changing the name to Ixion, New Hudson were able to slash the price of the motorcycles in order to clear stocks.

The company also used the name for engines sold to other firms, both at home and abroad, including the Swedish Rex.

1921 The Olympia Show report describes the light two-stroke model as follows: 'Notable on account of their fine finish and general excellence of design the New Hudson two-stroke motorcycles exhibited on this stand are sure to attract attention. The little 62 mm by 70 mm engine is well known as a giant in performance, and the ratios of the two speed gearbox , 5 and 9 to 1, give a satisfactory road speed with tremendous hill-climbing powers.(…) The riding position is very comfortable, and the saddle is but 25 ins. from the ground, to which desirable end the low built frame and 24 in. wheels are contributory factors. The tank is tastefully finished in brown and has a capacity for 1 ¾ gallons of petrol and 3 pints of oil; as the petrol consumption is in the neighbourhood of 100 m.p.g., it will be realized that a full day’s riding can be accomplished on one tankful of spirit.'