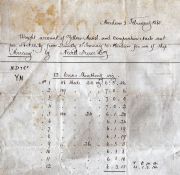 of Swansea and Llanelli

1794 Charles Nevill, owner of a Worcestershire copperworks and sometime mayor of Birmingham, established a copper works at Swansea[1] for the Birmingham Mining and Copper Co

1804 On behalf of John Guest, a merchant and industrialist from Birmingham (so is this the right John Guest?), and William Savill, a copper merchant from London, Charles Nevill established the Llanelli Copperworks - Llanelly Copper Works Company. Agreed terms for coal supply with Roderick, Bowen and Griffiths.

1805 Co-partnership deeds signed between Ralph Allen Daniell (a merchant and banker from Truro), William Savill, John Guest and Charles Nevill. Although Charles’s son Richard Janion was involved in the formation of the Copperworks Company, he was not made a partner at that time. Smelting started.

1813 The leadworks were rebuilt near the copperworks; smelting at the Llanelly Lead Works probably began early in 1813.

The Copperworks Company provided accommodation for its workforce and, in time, a form of welfare system

1816/7 Richard Nevill was made a full partner; John Guest sold his interests; the partnership became Daniell, Savill, Sons, and Nevill

1819 The partnership was Daniell, Son, and Nevill

1829 Purchased all of the Carmarthenshire collieries of General Ward, and became involved in numerous business partnerships.

By 1833 The company was responsible for 13 per cent of Britain's copper production, making it the nation's joint third largest copper smelting concern, a position it maintained over the following two decades.

1849 The Llanelly Copperworks Co took over the disused Cambrian Copperworks and converted it into a lead and silver smelting works.

Charles William Nevill, became MP for Carmarthenshire and High Sheriff of the county.

1873 The business was renamed Nevill, Druce and Company; partners included members of the Druce and Devas families.

The business declined due to competition from ore exporting countries, which started smelting their ores, and the exhaustion of the profitable seams at the company's collieries

1907 Closed its last coal mine, Pencoed.