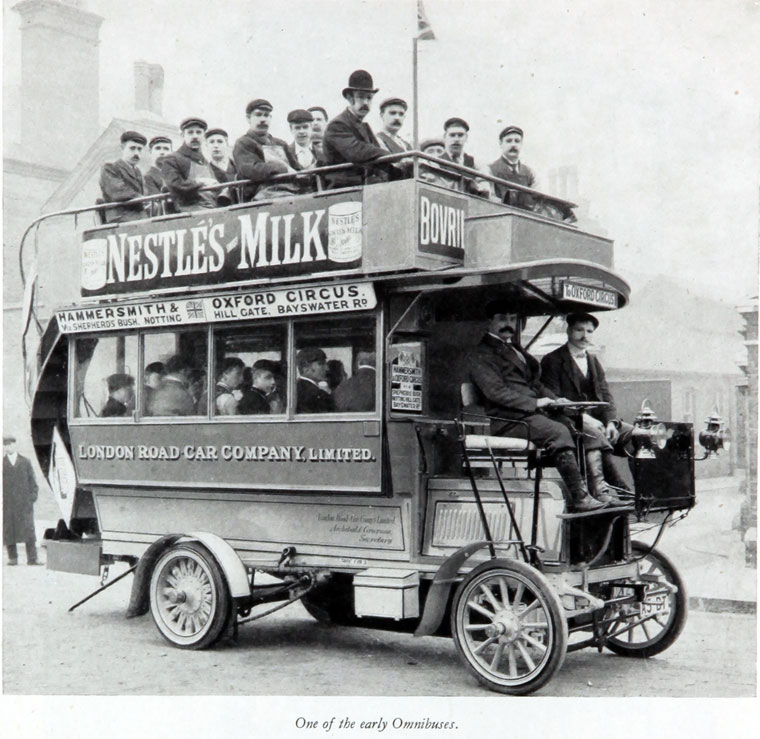 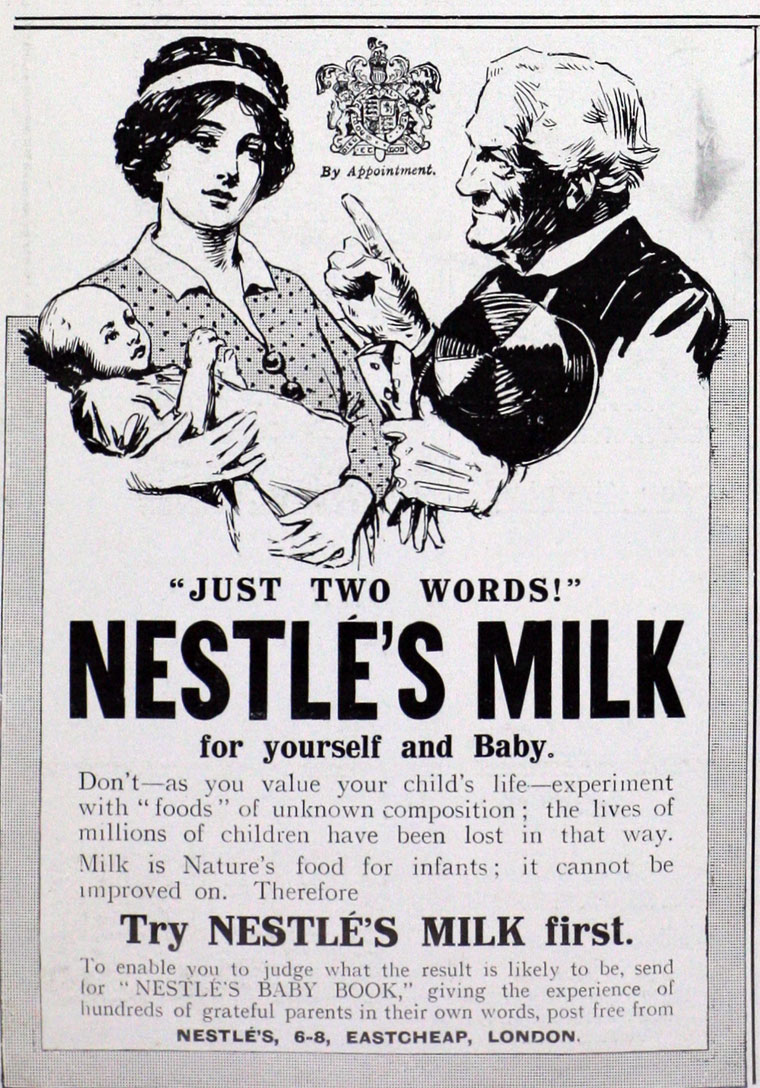 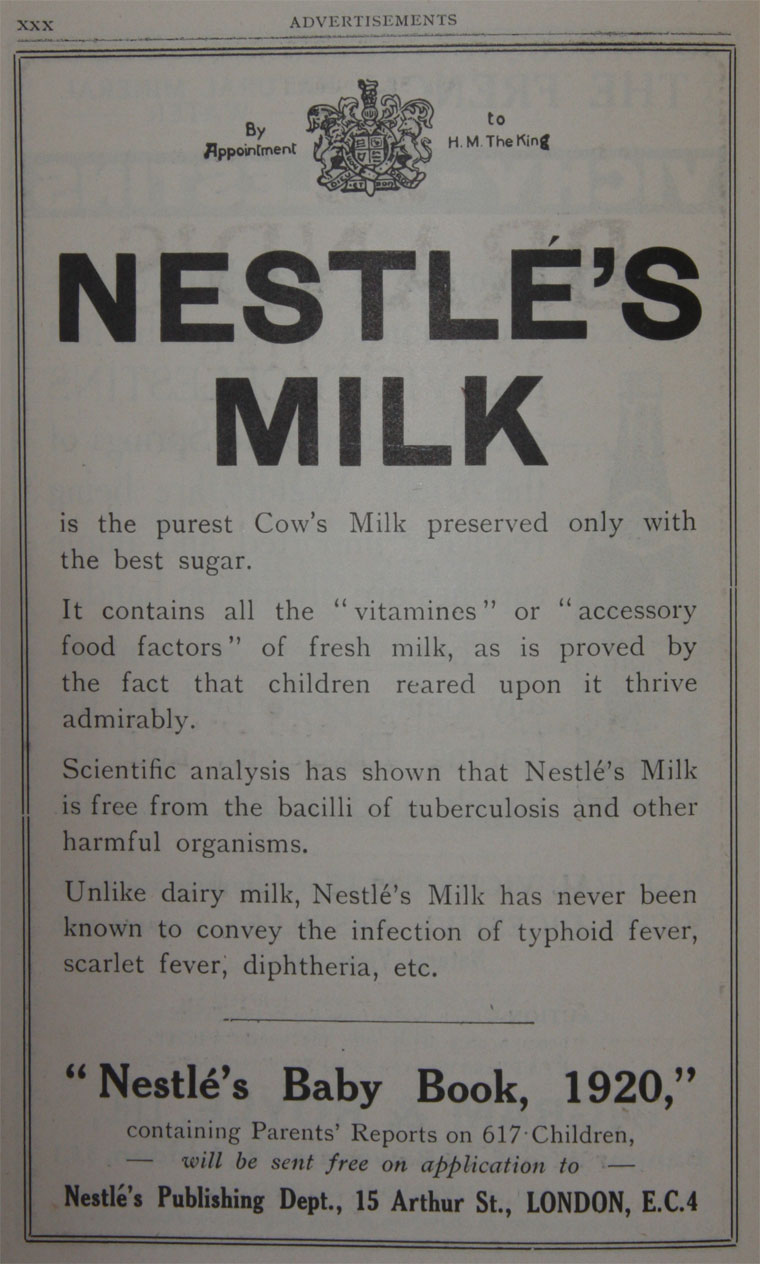 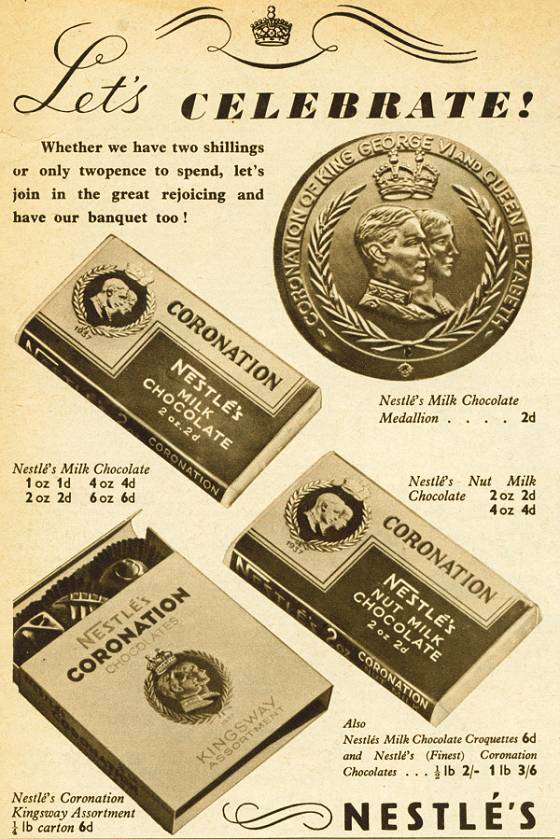 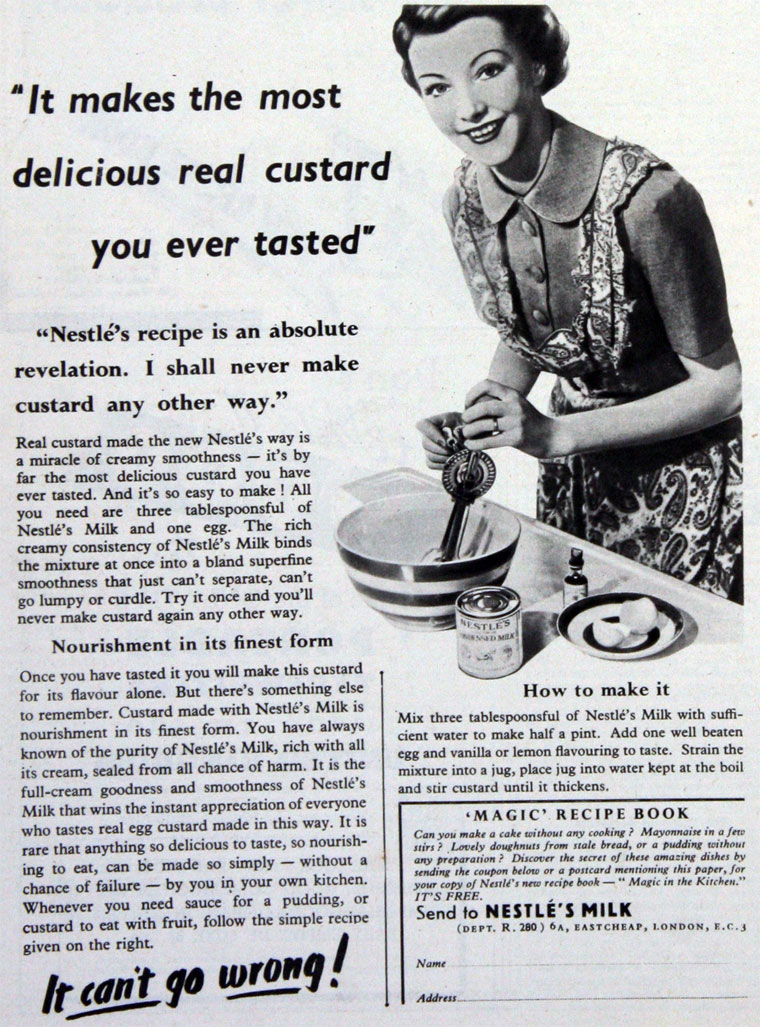 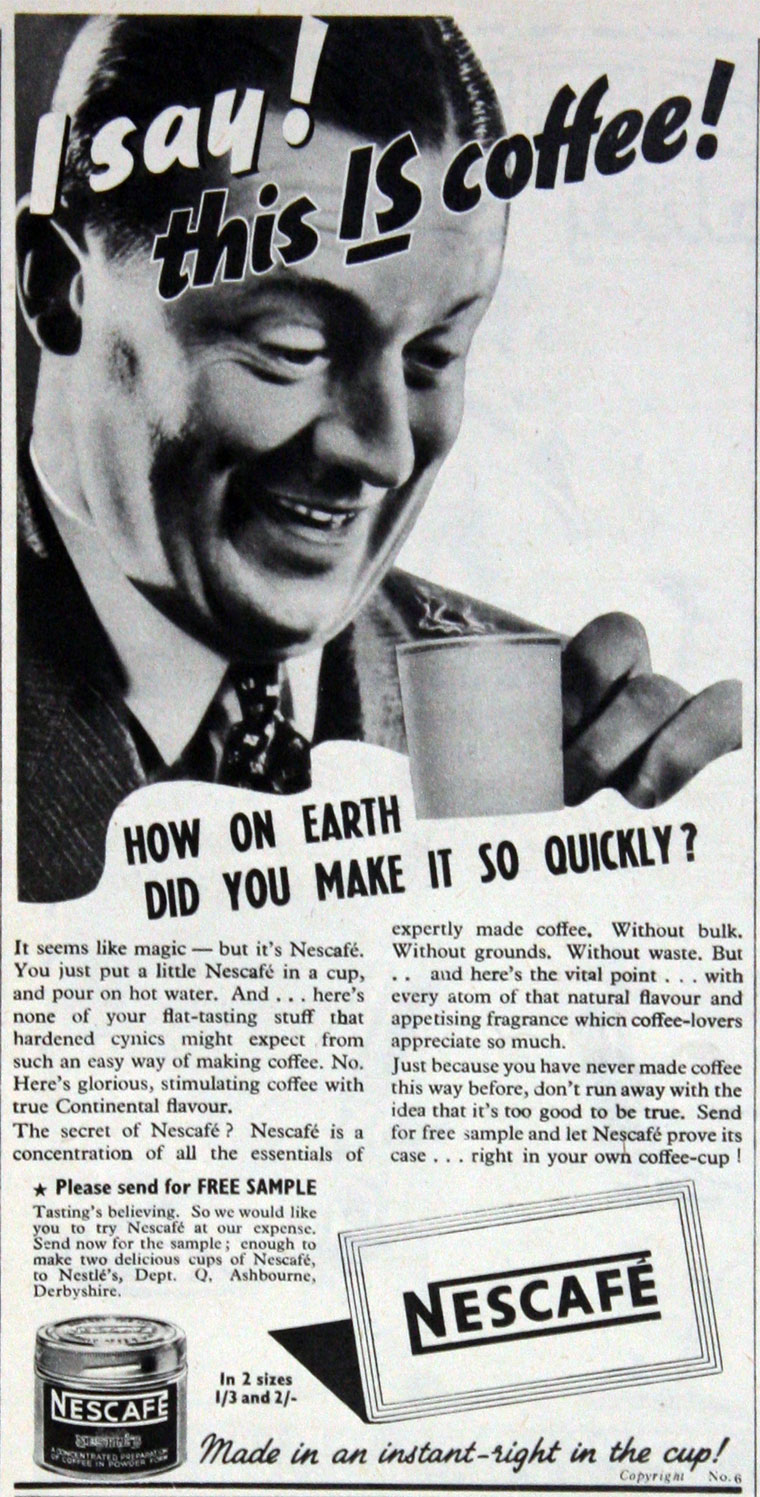 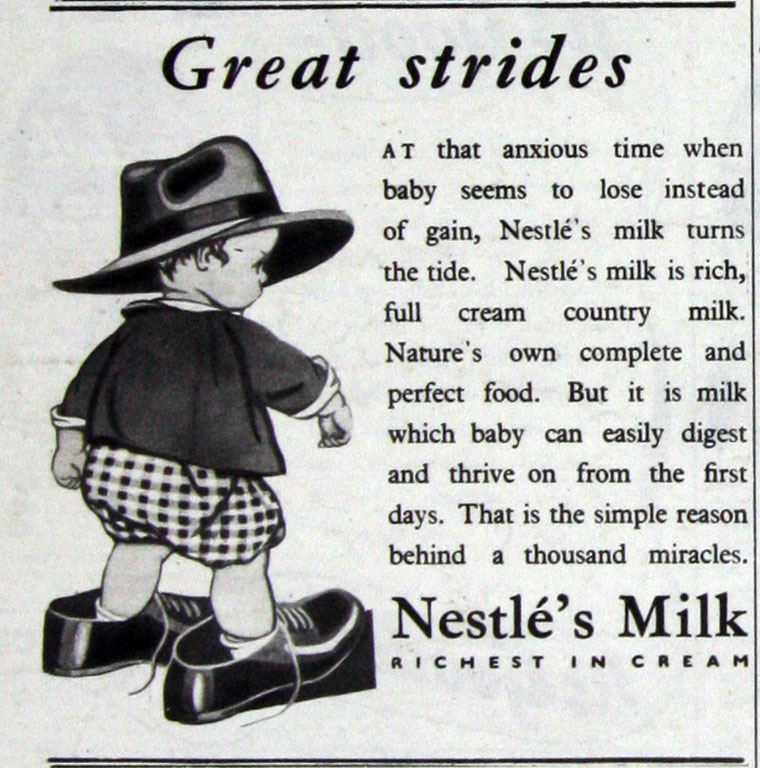 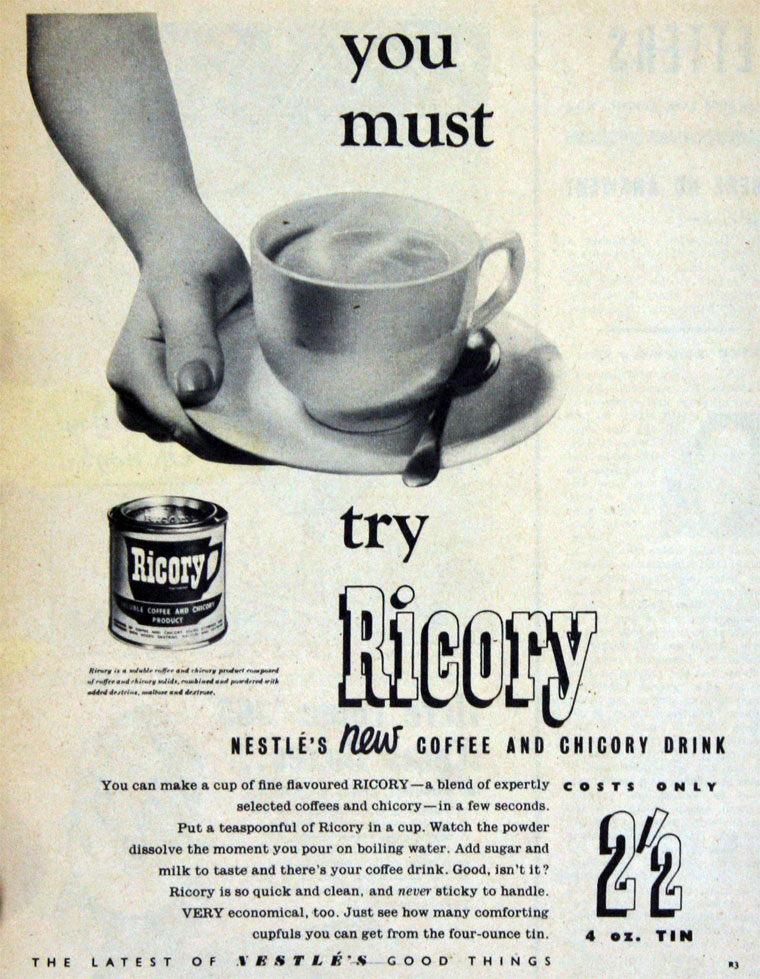 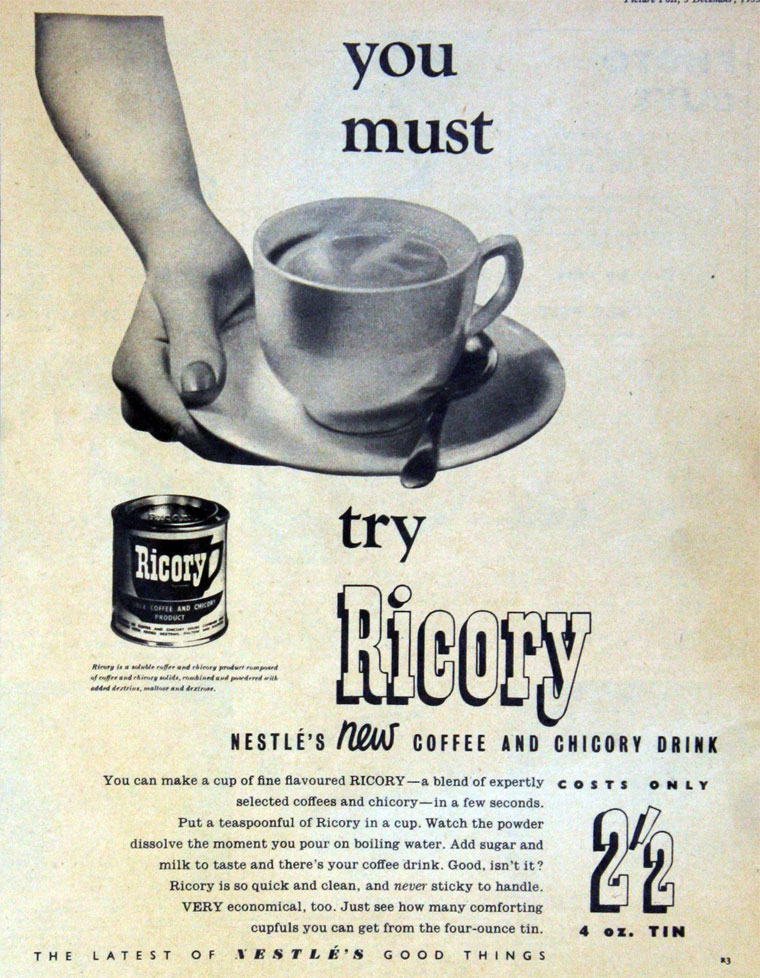 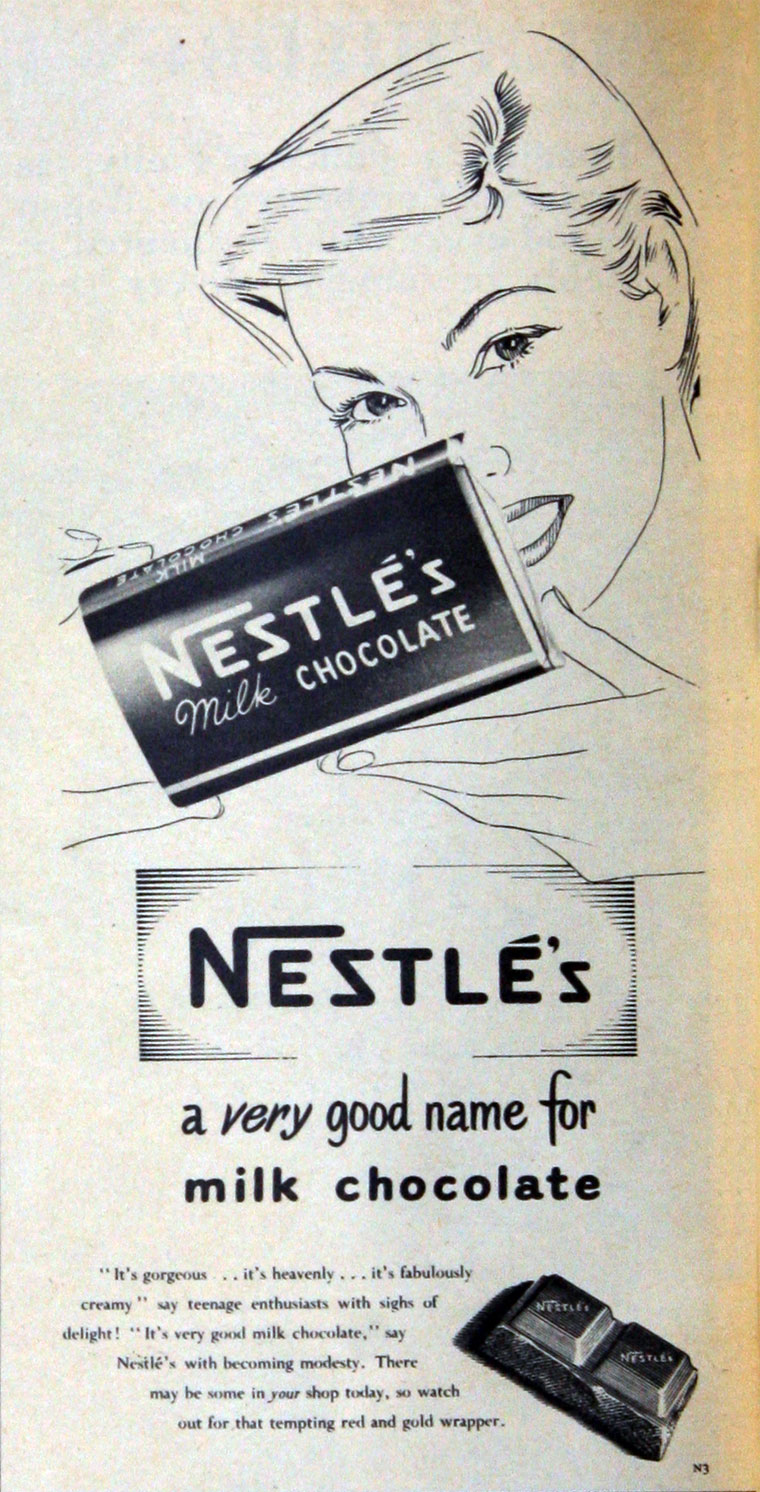 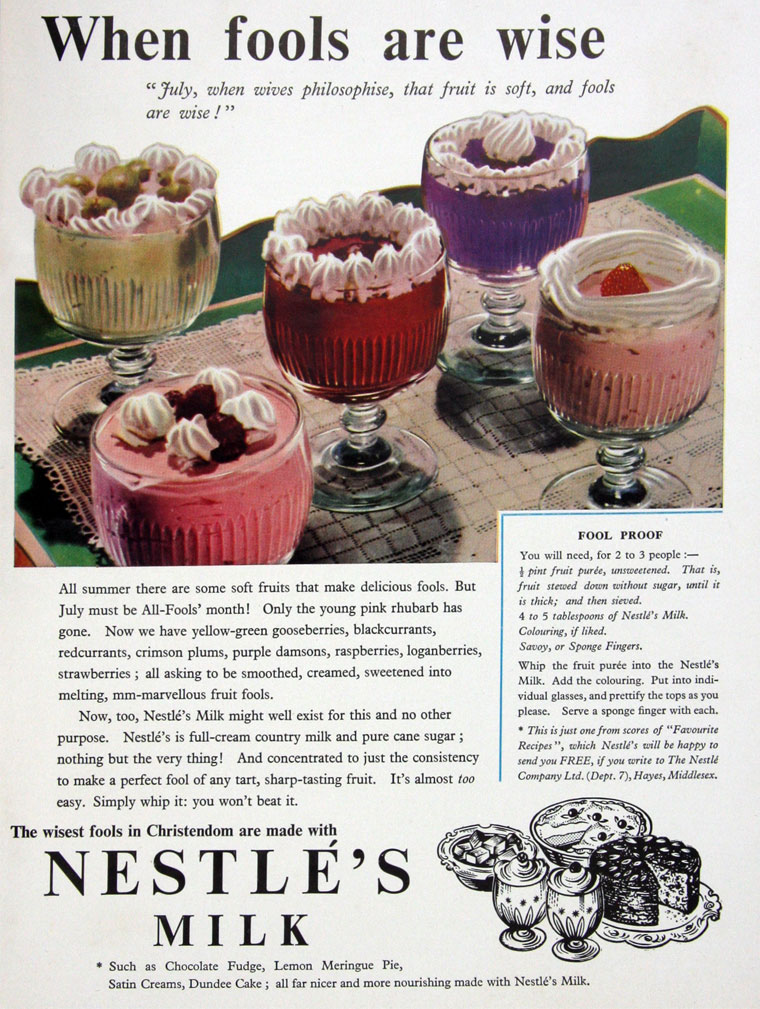 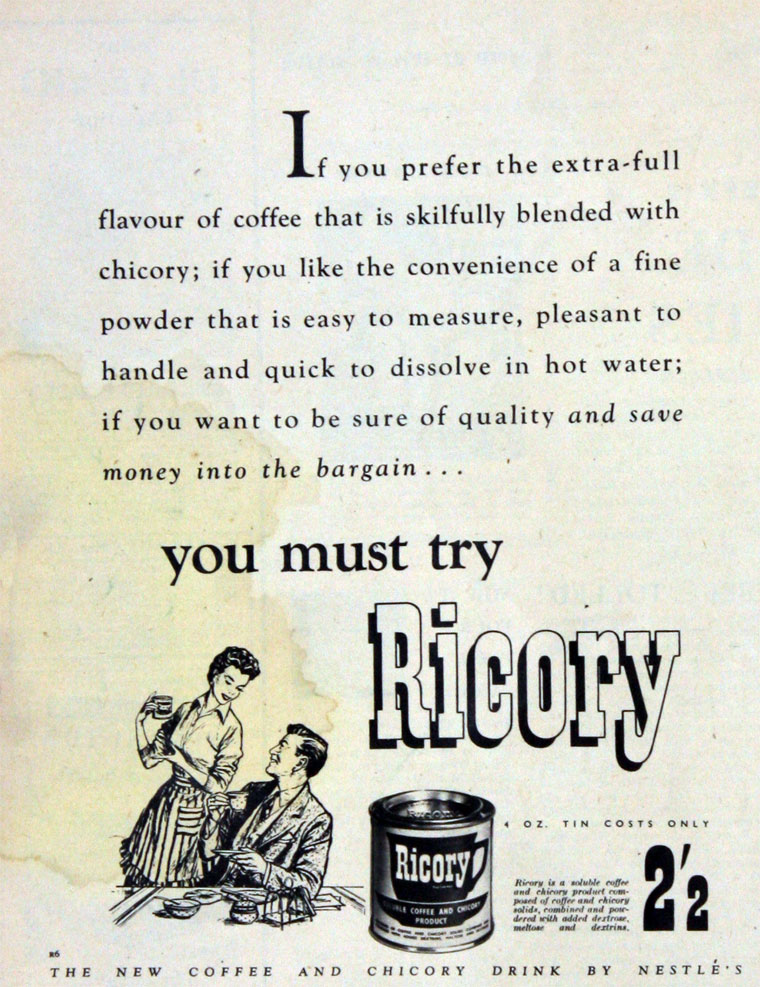 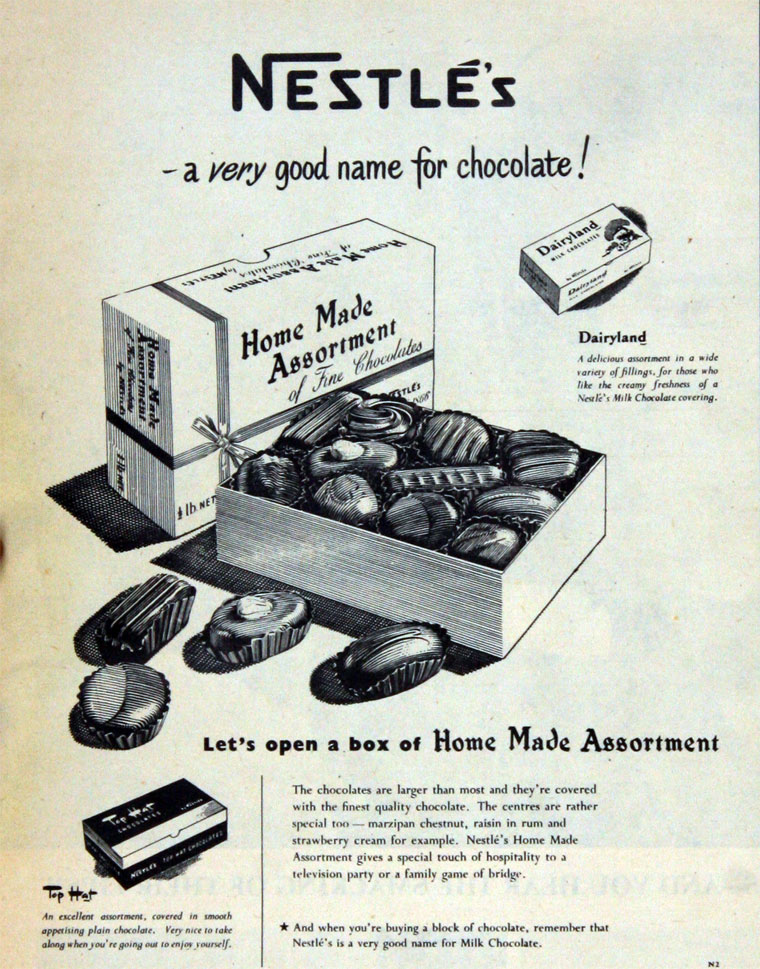 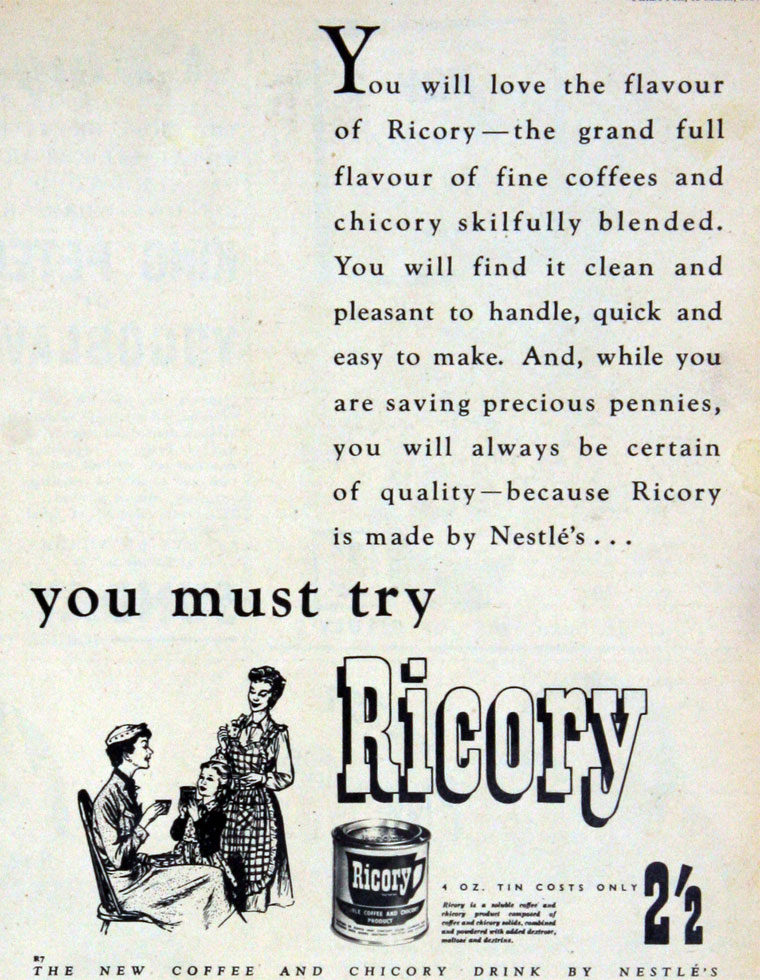 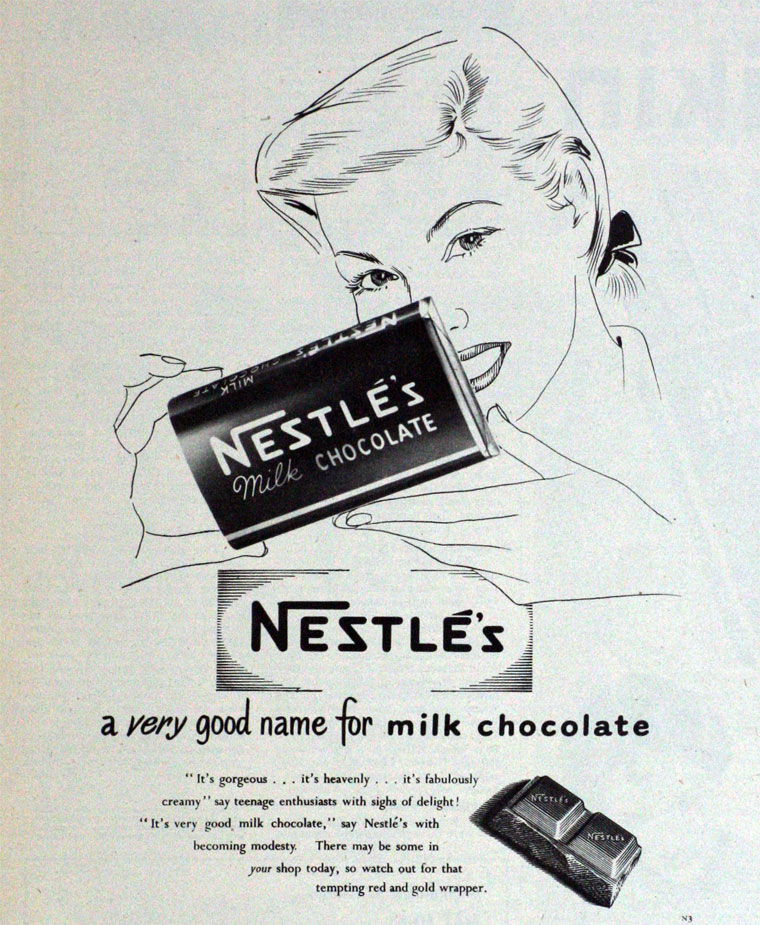 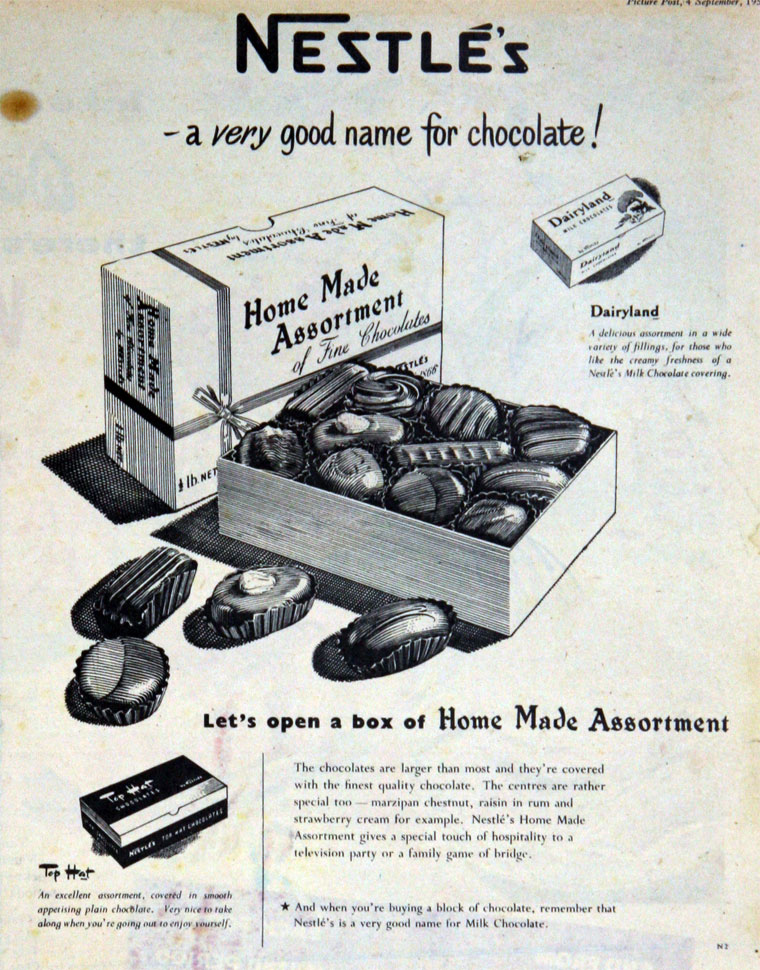 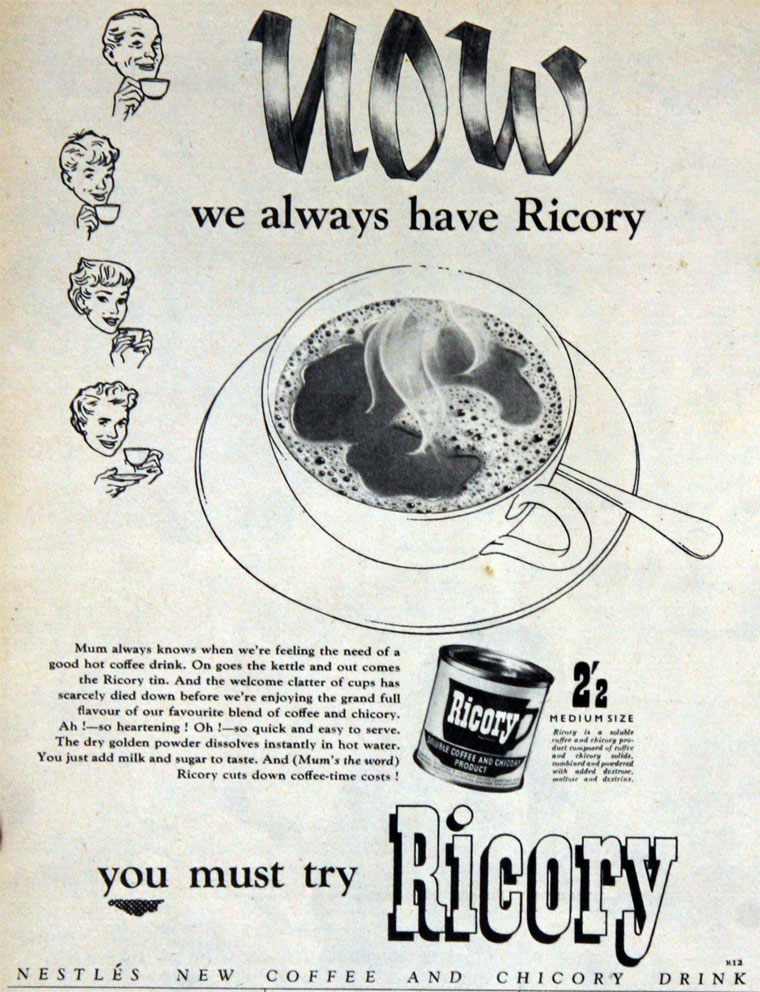 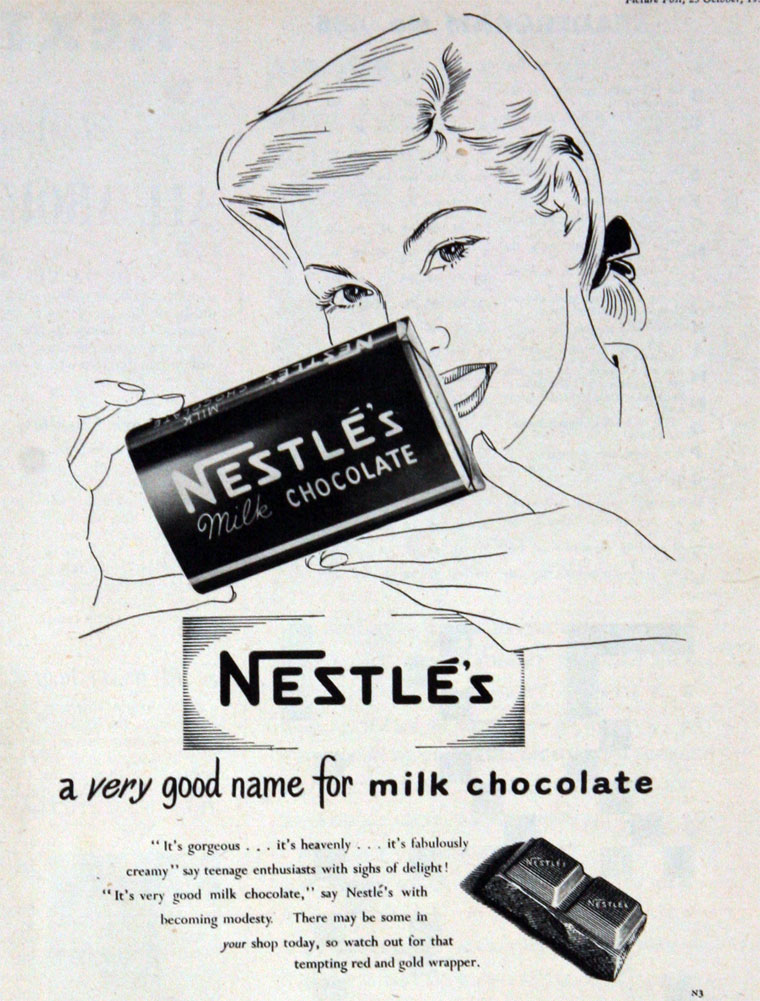 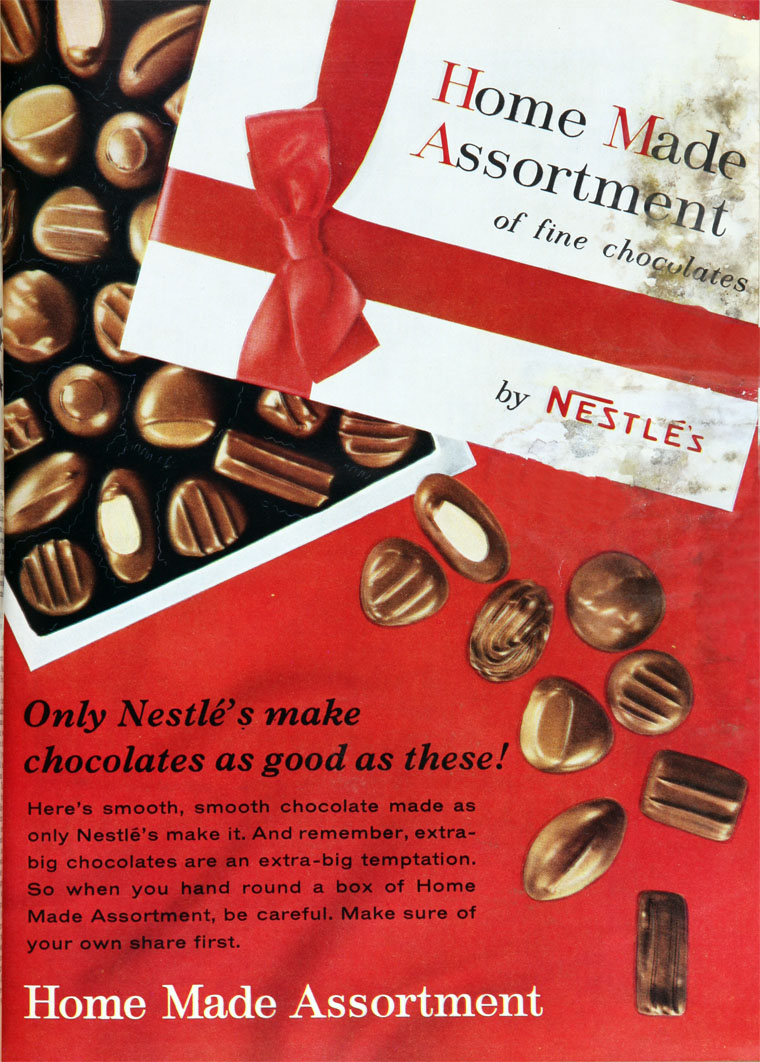 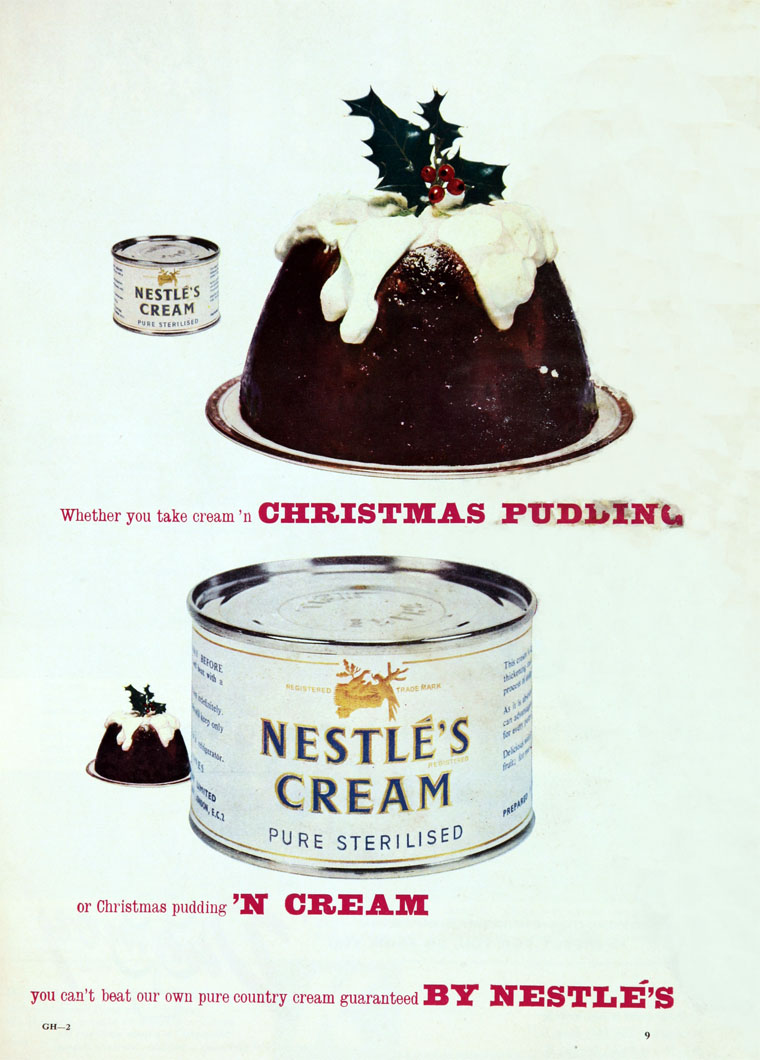 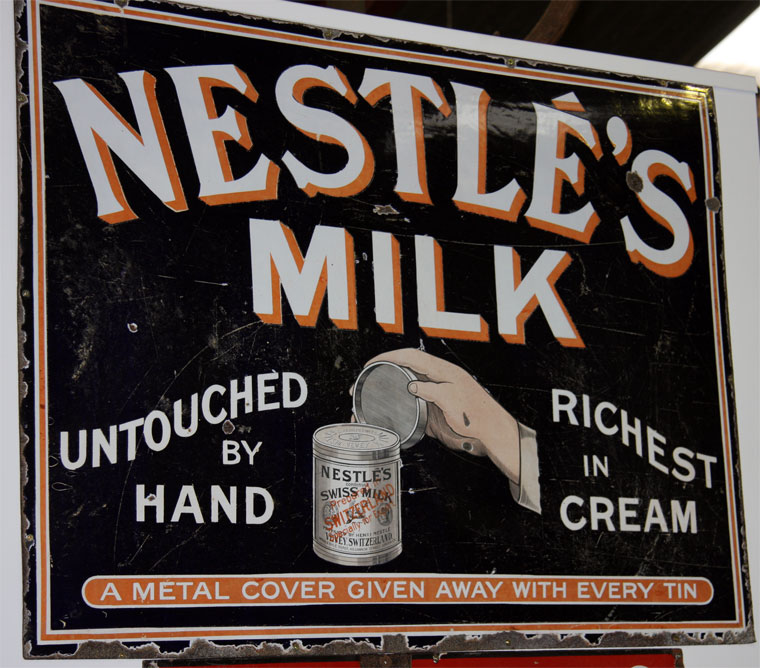 1866 Charles A. and George Page, brothers from the United States, established the Anglo-Swiss Condensed Milk Company in Cham, Switzerland.

1867 In September, in nearby Vevey, Henri Nestlé developed a milk-based baby food and soon began marketing it for infants whose mothers were unable to breastfeed; he called it Farine Lactee Henri Nestle.

1868 Henri set up an office in London and was then exporting outside Europe.

In the succeeding decades both enterprises aggressively expanded their businesses throughout Europe and the United States.

1875 Henri Nestlé retired. The Nestle Co was purchased by Jules Monnerate. The new owners retained the name unchanged. Around the same time the company began to produce condensed milk.

1875 The company played a role in the development of milk chocolate when it began supplying Daniel Peter in Vevey with condensed milk, which Peter used to develop the first ,ilk chocolate as a commercial product in the 1880s.

1877 Anglo-Swiss added milk-based baby foods to its products, and in the following year the Nestlé company added condensed milk, so that the firms became direct and fierce rivals.

1904 Nestlé began selling chocolate when it took over export sales for Peter and Kohler.

1905 The companies merged to become the Nestlé and Anglo-Swiss Condensed Milk Company, retaining that name until 1947.

Early 1900s, the company was operating factories in the United States, United Kingdom, Germany and Spain.

WWI created new demand for dairy products in the form of government contracts but also caused a shortage of raw materials and placed limits on cross-border trade which hampered production. To solve this problem, the company acquired processing facilities in the US and Australia. By the end of the war it had 40 factories and production had more than doubled.

After the war, government contracts dried up and consumers switched back to fresh milk. However, Nestlé's management responded quickly, streamlining operations and reducing debt.

1938 Launched Nescafé as a "powdered extract of pure coffee" that retained coffee’s natural flavour, but could be prepared by simply adding hot water.

Nestlé felt the effects of World War II immediately. Profits dropped from US$20 million in 1938 to US$6 million in 1939. Factories were established in developing countries, particularly Latin America. Ironically, the war helped with the introduction of the company's newest product, Nescafé, which was a staple drink of the US military. Nestlé's production and sales rose in the wartime economy.

The end of World War II was the beginning of a dynamic phase for Nestlé. Growth accelerated and companies were acquired.

In 1947 came the merger with Maggi seasonings and soups. The name was changed to Nestlé Alimentana SA. Maggi was a major manufacturer of soup mixes and related foodstuffs.

1948 Introduced a soluble tea, Nestea, in the USA, manufactured using the same method as Nescafé. Nesquik, which dissolved easily in cold milk, was also launched in the USA and becomes a top seller.

1974 Acquired a shareholding in L'Oréal which was a form of diversification.

1977 Nestlé made its second venture outside the food industry by acquiring Alcon Laboratories Inc.

1993 Set up Nestlé Sources Internationales as a separate waters business

2002 Nestlé Sources Internationales was renamed Nestlé Waters. After expanding its ice-cream business in the 1990s, added the licensing rights to Häagen-Dazs in the USA and Canada.