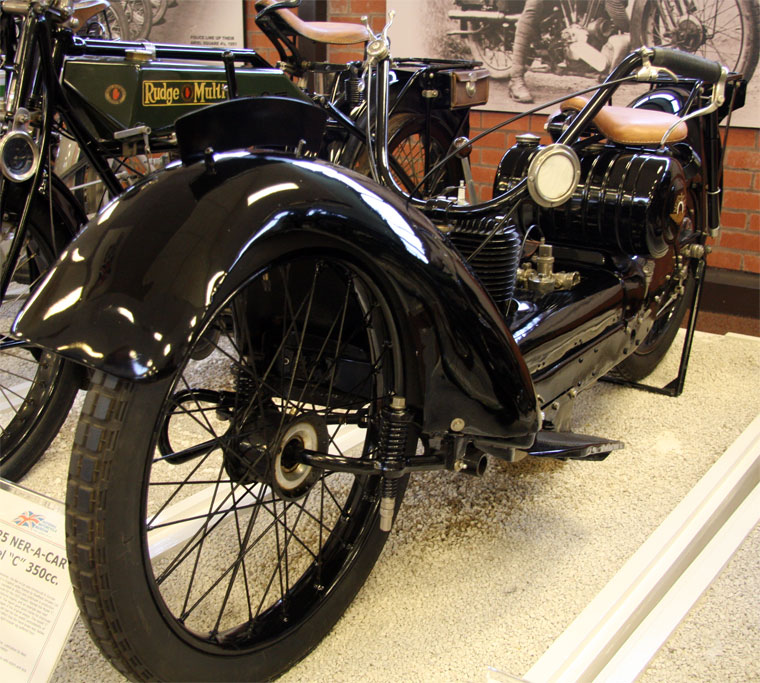 Ner-A-Car was a motorcycle of American design from Syracuse, New York, licensed to Sheffield-Simplex of Kingston-upon-Thames, Surrey. The name was a play on that of the designer, Carl Neracher.

The machine had previously sold well in America, but with the arrival of the Ford motorcar, the sale of motorcycles had begun to wane.

1921 The Ner-a-Car is announced during TT week at the Isle of Man. Intercontinental Engineering are the Agents, with Sheffield-Simplex manufacturing them at Tinsley, near Sheffield, with additional works at Finningley, south of Doncaster. It differs from Neracher’s original US design in small details, but is fitted with a Sheffield Simplex engine of 221c.c. The Ner-A-Car was styled on a monocoque frame, so that the rider sat low down, behind a wide front mudguard, and had foot-boards for protection from the weather. This strange design comprised a frame constructed of pressed-steel channel-section members that ran from the rear wheel, splaying out to carry leading links for the hub-centre steering pivot. Most of the mechanics were concealed by panels that ran on to the front mudguard and that were fixed to the frame, so that only the cylinder could be seen. Under the saddle was a cylindrical fuel-tank, and both drum brakes were in the rear hub. To begin with, as in America, the machine was fitted with a 211cc two-stroke engine with the crankshaft set along the frame. Its flywheel was placed at the rear to drive a friction wheel at right angles to it, with this able to move across its face. This movement varied the ratio between them and was controlled by a lever that, at first, was fully variable, but later had a choice of five positions. From this a chain drove the rear wheel.

1923 Production moves to Kingston-on-Thames. A larger model, the Model B, is produced, with a 285c.c. engine, and a much larger front mudguard. It retains the friction drive and hub-centre steering. Sheffield-Simplex now market the machine. The machine was easy to mount and ride and sales were good but not great.

1924 In England, a new model, the Model C, is introduced, this time with a 350c.c. side-valve Blackburne engine fitted, driving through a conventional clutch and gearbox.

1925 Better performance was needed, so the engine changed again, this time to an ohv Blackburne. This was the Model C.

1927 Production stops in the UK as Sheffield-Simplex were in financial difficulty and, as sales had never been that good. Around 6,500 were made.