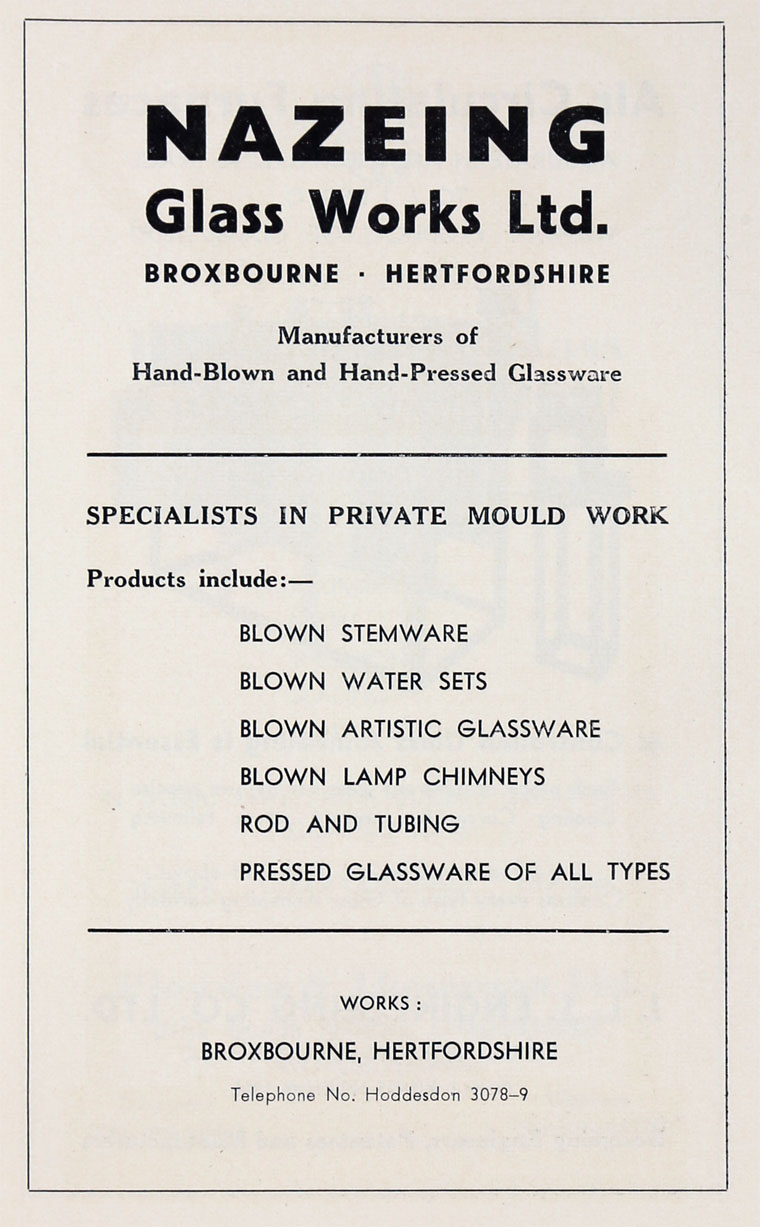 1612 The roots of this company can be traced back to 1612, when the first factory was opened in Vauxhall, Surrey, by Sir Edward Zouche. It was later known as Dawson Bowles and Co.

1874 A second works was opened in Vauxhall Walk, for producing gas globes and fittings. The flint and coloured glass were the main products at this time.

1920 The rapidly expanding electric light bulb industry was becoming the major industrial glass user at this time, so Richard moved the glass works to Southwark.

1928 The works moved again, to Nazeing, Broxbourne, Hertfordshire, taking the name Nazeing for the glassworks. These works were very basic and comprised a shed in a marshy field with a coke fired skittle-type furnace holding about 200 kilos of molten metal. The annealing oven was a hand-operated conveyor, and there was no mains water supply. Most of the early production was hand-blown, decorative, coloured glassware.

1930s Financial difficulties almost caused the company to fold but another electric lamp manufacturer took a share for glass rod production. These rods were drawn by a boy running across a field with the hot glass.

1939 a Belgian glassblower was employed and stemmed glasses were then made in the continental style.

WWII. War production was directed to ships’ signal lights and semaphore lenses for the Admiralty, and lamp caps for the Ministry of Aircraft Production. The shed was upgraded to Nissen huts and army surplus tents and, by the end of the war, the factory was producing glass for many government departments.

Post-WWII. A serious flood almost ruined the factory, but production was restarted after a few months of repair work. Expansion brought the development of single pot brick furnaces to replace the original and these gave the factory a much greater flexibility in production. A major retail outlet was Elwell of Harlow, Essex. Examples of Nazeing are often found with an Elwell label.