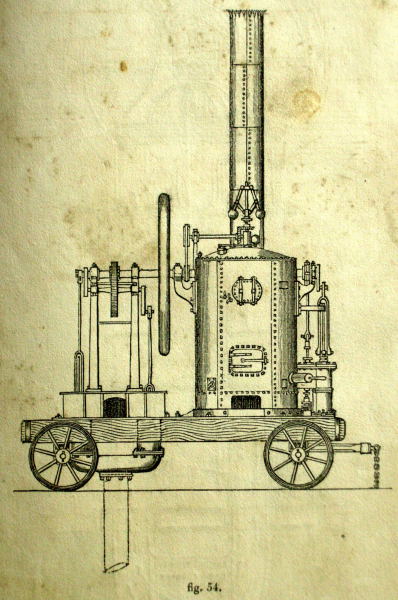 Gough's portable engine, driving a pump. From The Steam Engine, its History and Mechanism', 1854 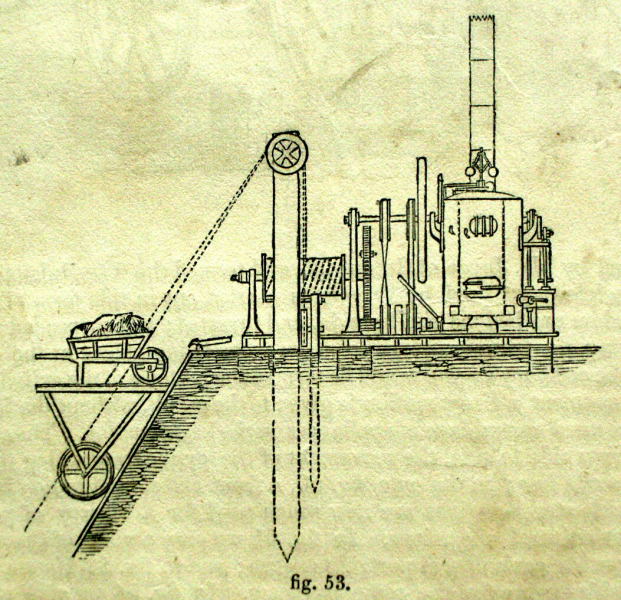 1821 November. A cotton-spinner of Ardwick has invented a locomotive steam carriage. Repeated experiments over the last two years. Up or down hill at a speed of nine or ten miles per hour. Relayed from the Manchester Guardian. [1]

1824 September. Mr. Gough gave a trial of his steam carriage and it travelled at three miles an hour on level ground and carried three or four passengers. The drive was to the rear wheels only and works on the high-pressure principle. [2]

1824 Floors collapse at his factory in Salford and many are killed [3]. This was Islington Mill

1829 'On Friday evening Mr. Nathan Gough made his appearance in the streets at Manchester, steering his new steam-carriage, which appeared to move at the rate of six or seven miles an hour. The vehicle was followed by immense crowds of people, and occasionally stopped to take up and set down passengers, who seemed very much pleased with the treat of riding upon this novel conveyance. The quantity of smoke emitted was much less than we have ever seen from the carriage on former occasions. — (Manchester Guardian).' [6]

1830 Advertising his steam engines, from 1/4 to 4 HP, suitable for driving machinery such as grinding mills, sawing machinery, lathes, pumps [7]

1833 'Manchester Agricultural Society.—The auimal exhibition of this Society (which was instituted in 1767) took place on Tuesday last, in the yard of the Old Cloth Hall, Salford. .... Among the improved agricultural implements exhibited were a small working model by Mr. Nathan Gough, of his patent steam-engine or facilitator, an engine of 1 3/4 horse power, at work, and an agricultural steaming apparatus for preparing food for cattle.'[8]

1837 Premium of 3 sovereigns awarded by the Liverpool Agricultural Society to Mr Nathan Gough of Salford, Manchester for his compact portable steam engine, suitable for churning and other purposes [9]

The illustrations above are taken from an 1854 book[12] and show 'Gough's portable engine'. It is reasonable to assume that this is Nathan Gough's engine. The arrangement of the crankshaft seems far from ideal with regard to alignment, having four bearings whose alignment will be affected to different degrees by thermal expansion

Nathan Gough was born at Holt-Town, Manchester, in 1790.

His father, Mr. Joseph Gough, a dyer, originally from Kendal, Westmoreland, having a large family, could not afford his children the benefit of even the ordinary rudiments of education, and at ten years of age, young Nathan was set to work, for an elder Brother, in a cotton mill, where for seven years, he worked on an average about seven days and a half per week, and at the age of seventeen he had risen to the position of manager of his Brother's mill.

In the course of time he became a spinner on his own account, at Ancoats, and during his career encountered many vicissitudes, the mills he occupied being twice burnt down, and at the mill, built for him at Salford, by Mr. Bateman, the building fell, whilst the hands were at work, unfortunately causing the death of nineteen work-people; yet he persevered in his endeavours to work his way upwards, and being always fond of mechanical pursuits, he abandoned cotton-spinning, to become a manufacturer of small portable engines and other machinery, chiefly employed by contractors for buildings and engineering works, for which a large demand was then springing up. He thus became the medium of introducing several simple and ingenious machines for saving labour and was ultimately very successful.

He was an ingenious, self-educated man, who owed his ultimate position entirely to his own industry and perseverance.

He was extensively employed by Civil Engineers and Contractors, by whom he was much respected, and at his decease on the 9th of January 1852, in his sixty-third year, he left a considerable engineering establishment now conducted by his son Henry Gough

He was a member of the Institution of Mechanical Engineers, of Birmingham, and joined the Institution of Civil Engineers as an Associate Member in the year 1845; he took great interest in the proceedings and attended the meetings whenever his avocations permitted his doing so.