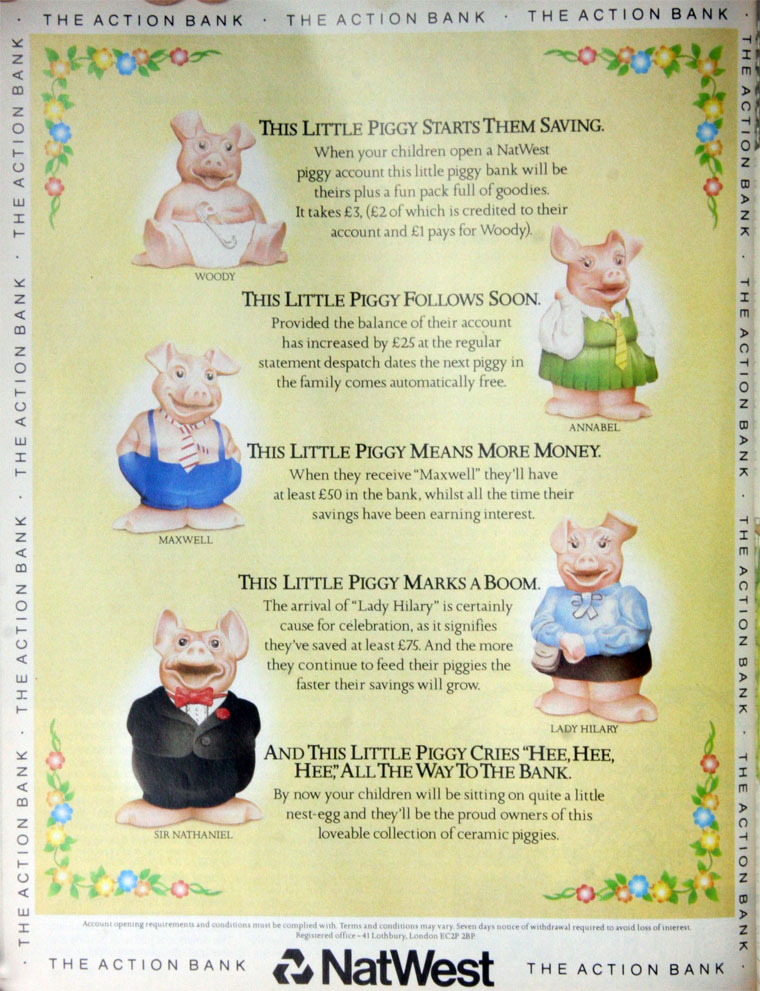 1969 The statutory process of integration was completed

1970 National Westminster Bank started trading on 1 January, adopting the three-arrowheads symbol as its logo. The new bank immediately embarked on a process of branch rationalisation, closing branches where representation was duplicated and opening offices in areas of new commercial and industrial activity as well as in hospitals and universities. Overall the branch network was reduced from 3,600 branches in 1970 to 3,200 in 1979. A wider range of services was introduced including the bank's first credit card, in 1972 and computer-linked Servicetills in 1976.

Beyond the domestic market, the newly-created International Banking Division sought to provide international banking services to large companies and to focus on expansion in the USA, the Far East and Europe. A syndicated venture to finance North Sea oil in 1972 led to continuing involvement in energy exploration and major project finance such as the Channel Tunnel. In Europe National Westminster Bank’s representation was supplemented by investments in France, Germany, Spain, the Netherlands, Greece and Switzerland, whilst the purchase in 1979 of the National Bank of North America, with 141 branches in the City and State of New York, marked a move into retail banking in the USA.

1980 National Westminster Home Loans was established, to provide a comprehensive mortgage service, and other initiatives included the formation of the Small Business Unit in 1982 and launch of the first children's account, the 'Piggy Account', alongside a range of other new savings products, in 1983. The 'Action Bank' advertising campaign spearheaded a new marketing-led approach to business development.

Other technological developments followed the computerisation of all the bank’s branches by 1970. National Westminster Bank led the growth of on-line cash dispensing machines in the 1970s and in the 1980s further new services were developed such as telephone banking and touch-screen share dealing to assist the government's privatisation programme.

1992 NatWest Markets was formed from the Group’s corporate banking and investment arms. These events were accompanied by a wide-ranging review of all operations, which led to the sale of a number of businesses, including National Westminster Bancorp. Significant new ventures were, however, embarked upon, including the launch of a life assurance business, NatWest Life, in 1993.

1995 the group was restyled NatWest Group to reflect the positioning of the company as a portfolio of businesses.

2000 National Westminster Bank was acquired by The Royal Bank of Scotland Group to create the third largest banking group in the UK. The retail bank continued to trade on the High Street under the NatWest brand.