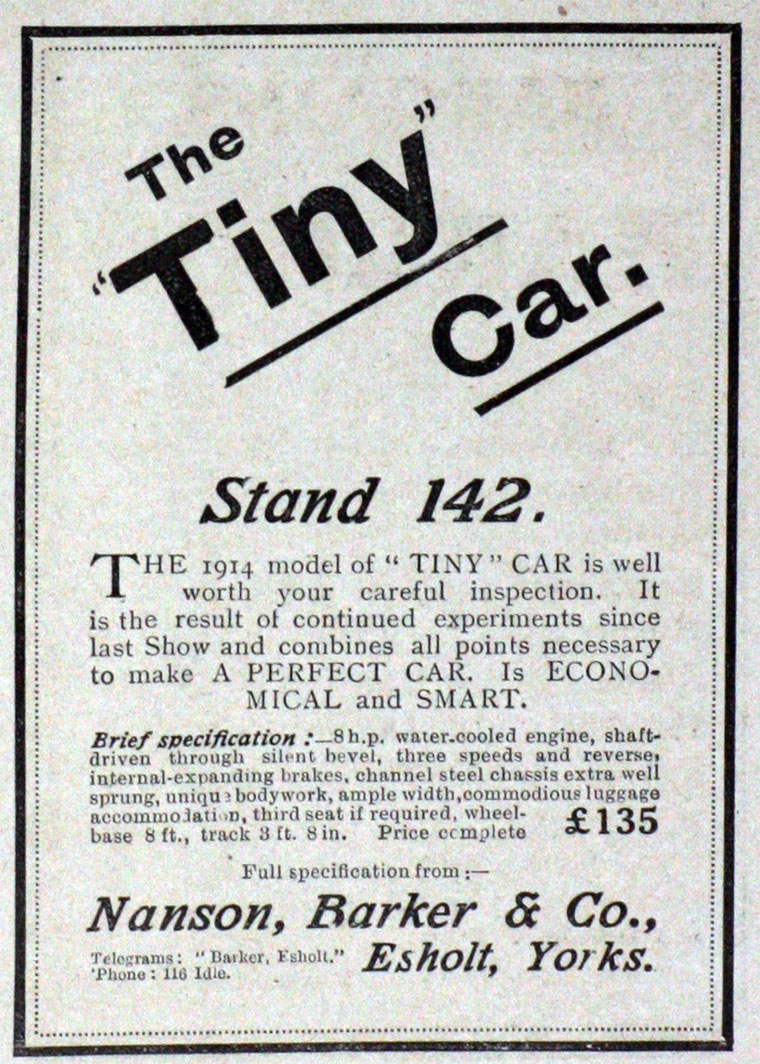 Nanson, Baker and Co of Esholt, Yorkshire was a maker of cars.

1912 The Tiny was a 8hp, produced in 1912 was powered by an air cooled JAP V-twin engine, 3 speed gearbox and chain drive. Unlike many cyclecars a differential was fitted to the rear axle. The 2 seater bodywork was in aluminium with a wheelbase of 96 inches (2,440 mm) and the range included a van. Springing was half elliptical springs front and rear and braking was by external bands on the rear wheels. The car cost about £100 and was claimed to be capable of 50 mph. It was exhibited at the 1912 London Motor Cycle show.

In 1913 the engine was replaced by a water cooled Precision V twin of 964 cc. There were other improvements including changing the brakes to internal expanding and replacing the chain with shaft drive. The price rose to £135.

1919 The Airedale: After the war in 1919 a larger car was developed and the company name changed to Airedale. This new model was rated at 12hp and had a 1,795 cc four cylinder overhead valve Dorman KNO engine with Zenith carburettor producing 22 bhp at 1,500 rpm. Drive to the rear wheels was through a four speed gearbox and plate clutch. The car had a wheelbase of 9 feet 9 inches and overall length of 13 feet with conventional half elliptic leaf springs all round. It seems to have also been know as the 12/24 and 11.9hp. In 1922 they had sufficient confidence to take a stand at the London Motor Show and the name of the company was changed from Nanson, Barker and Company to Airedale Cars. The cars at the show were priced at £575 for a special coupé, £435 for a 4 seat tourer, £425 for a 2 seater with dickey and £375 for a bare chassis.

Apart from the engines nearly all parts including gearboxes were made on site by Airedale themselves. The cars were very well finished and equipped and this made them expensive. Approximately 90 cars were made, about 55 of the 12hp and 35 of the 14hp models.

1924 The company went into liquidation in September 1924, a revival was attempted in 1927 but also failed. No cars are known to survive.