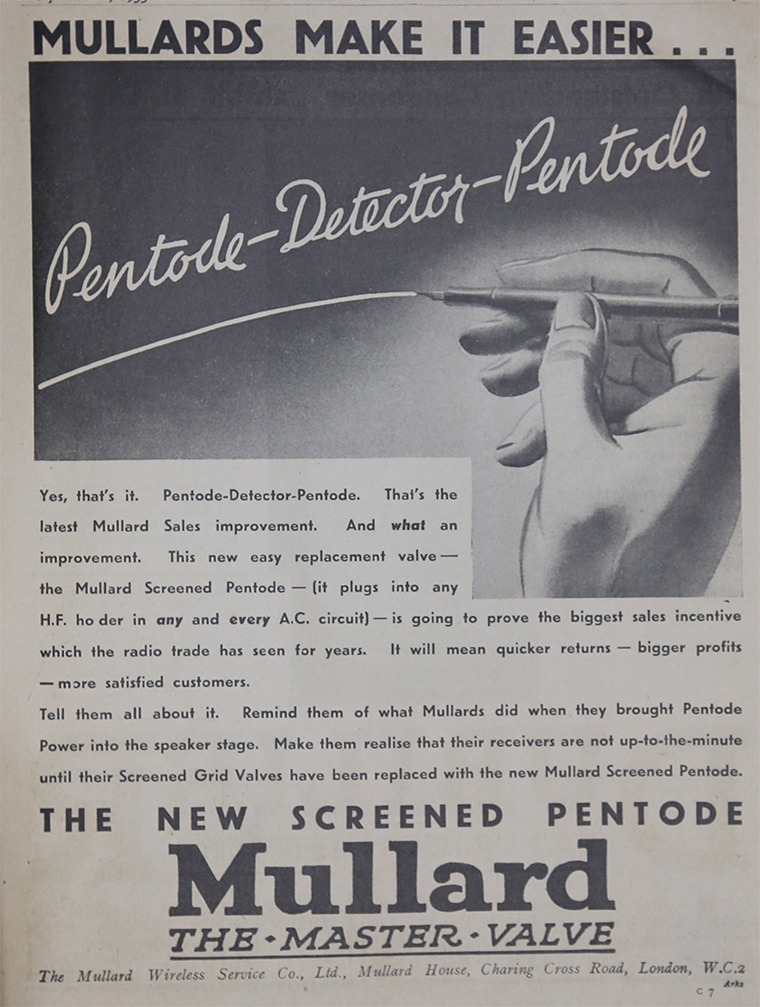 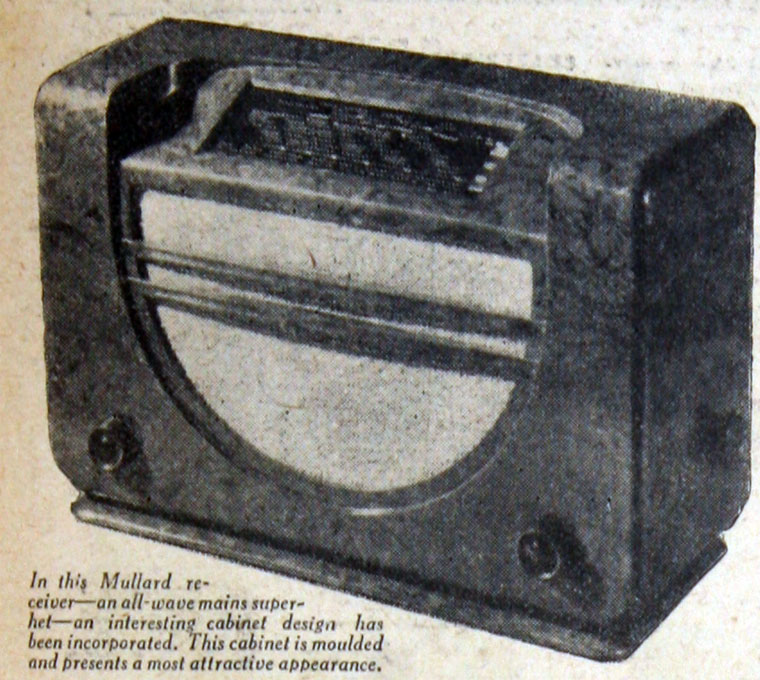 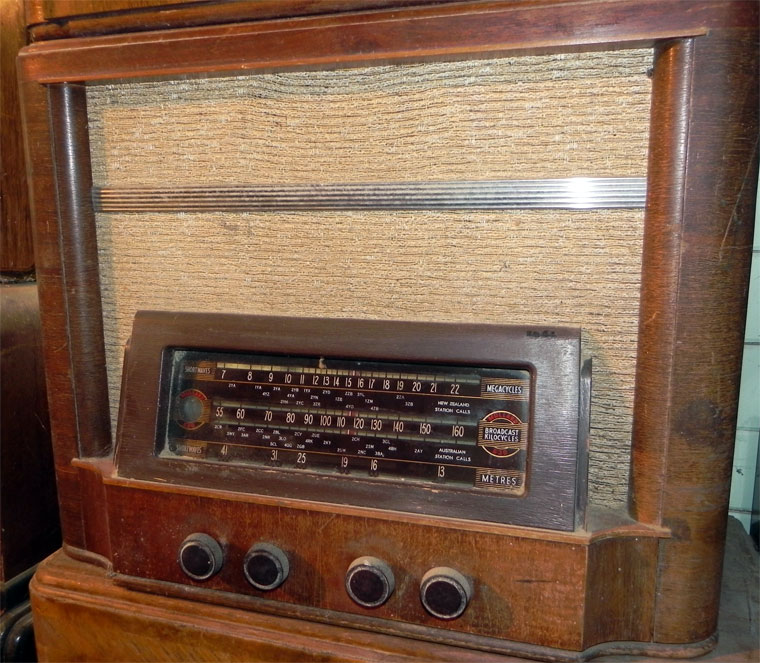 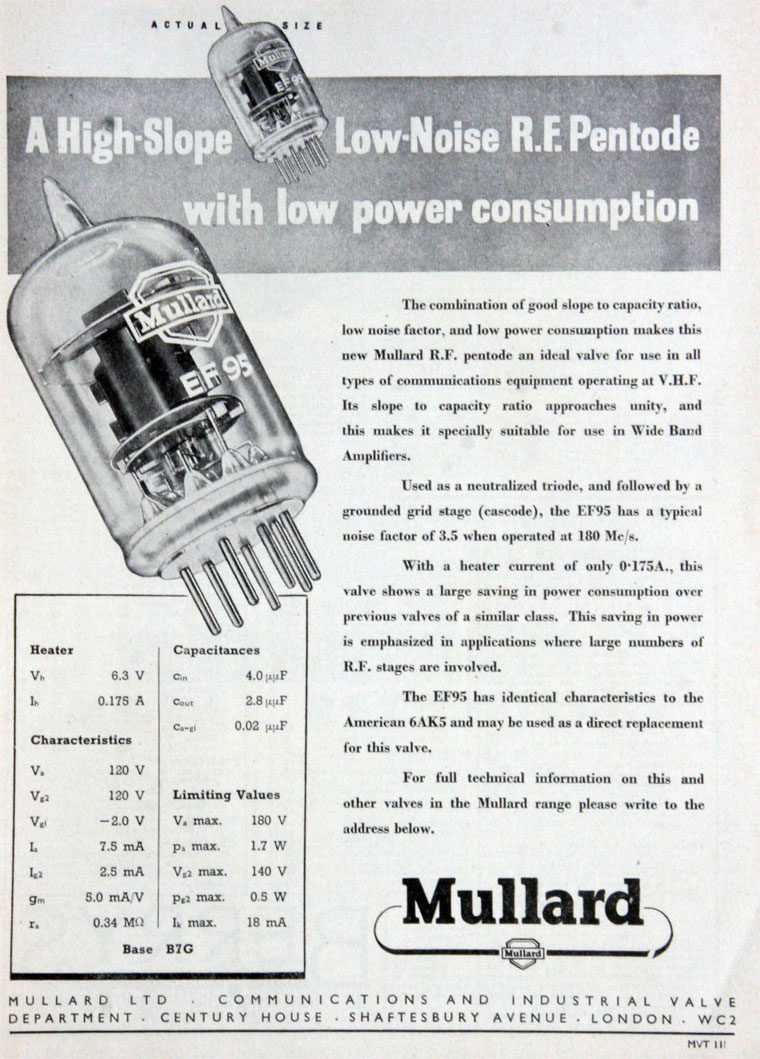 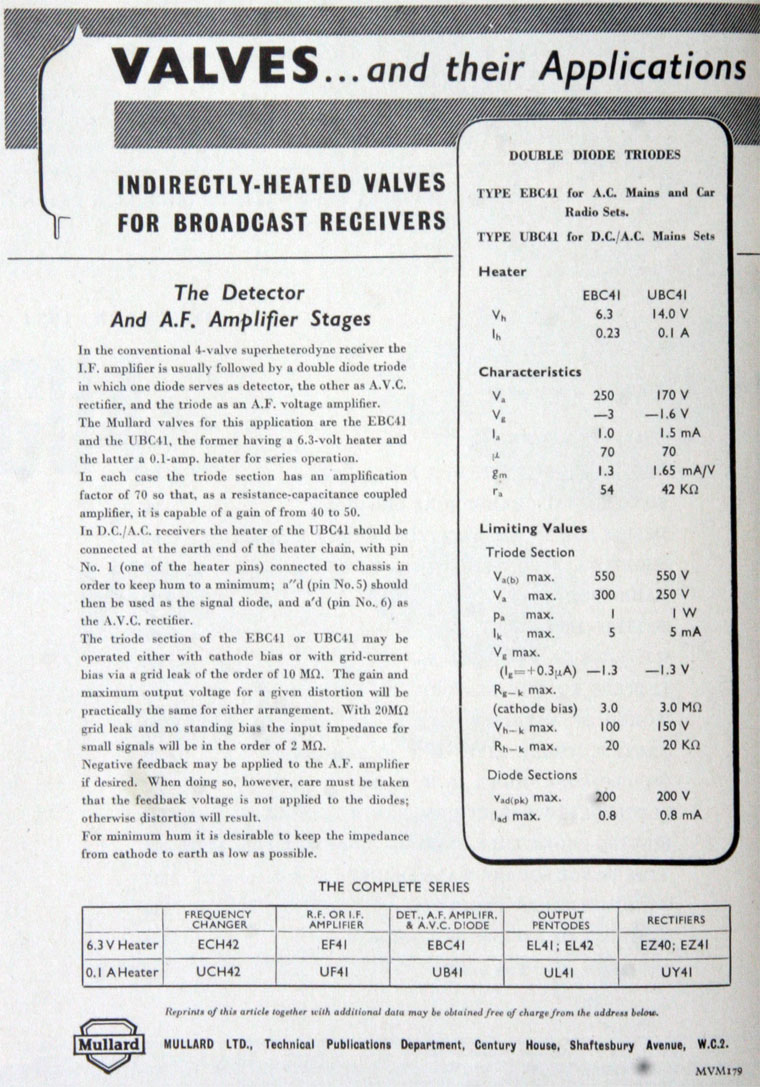 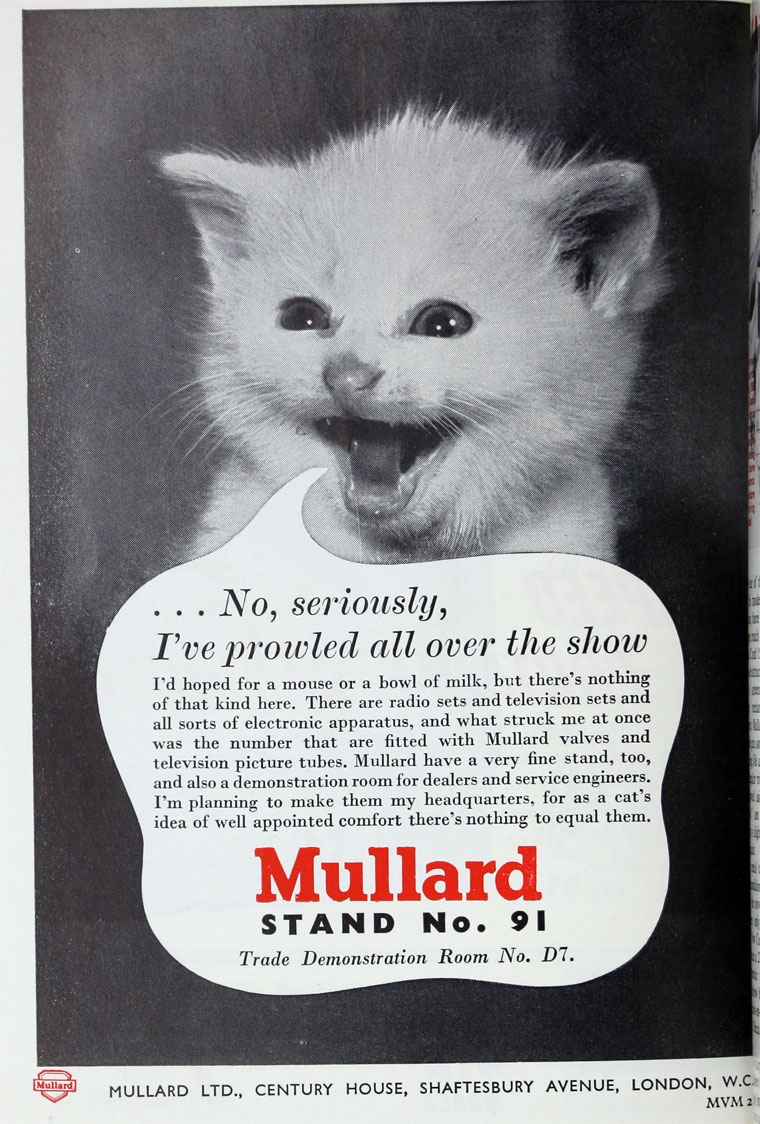 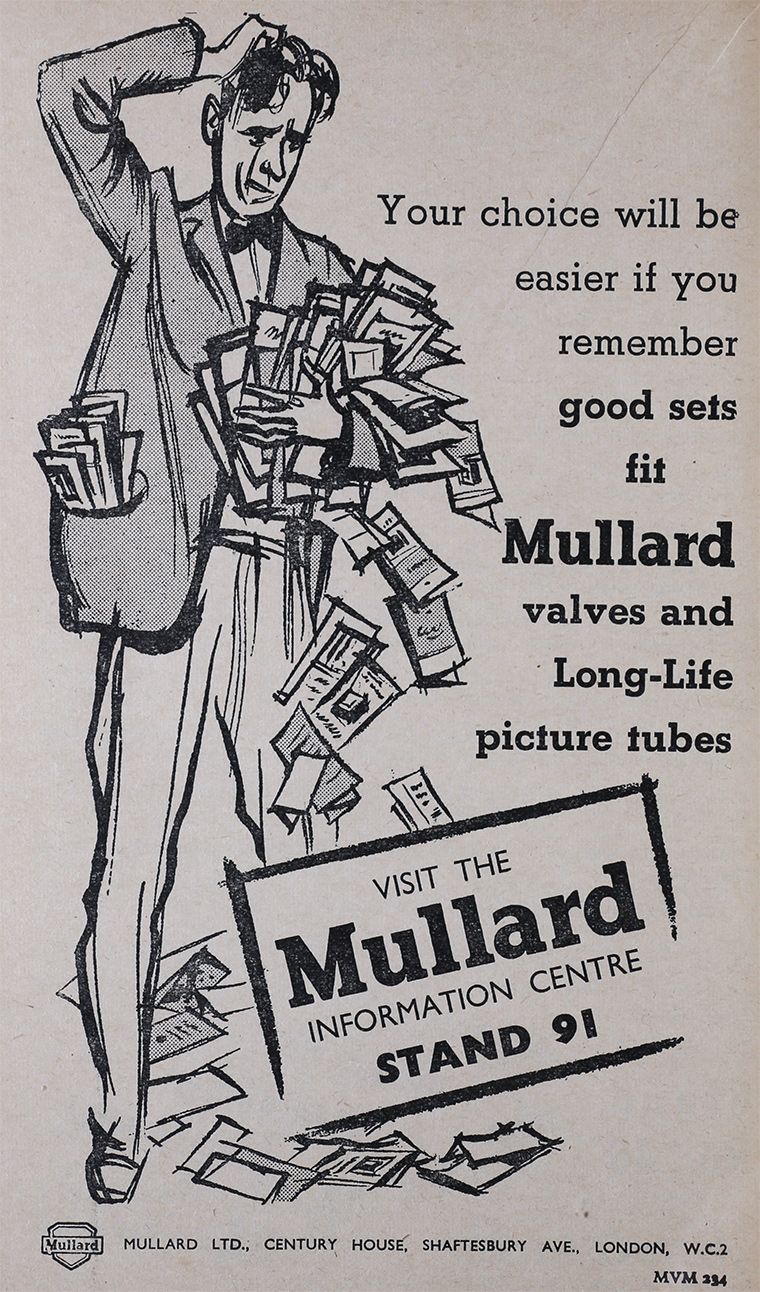 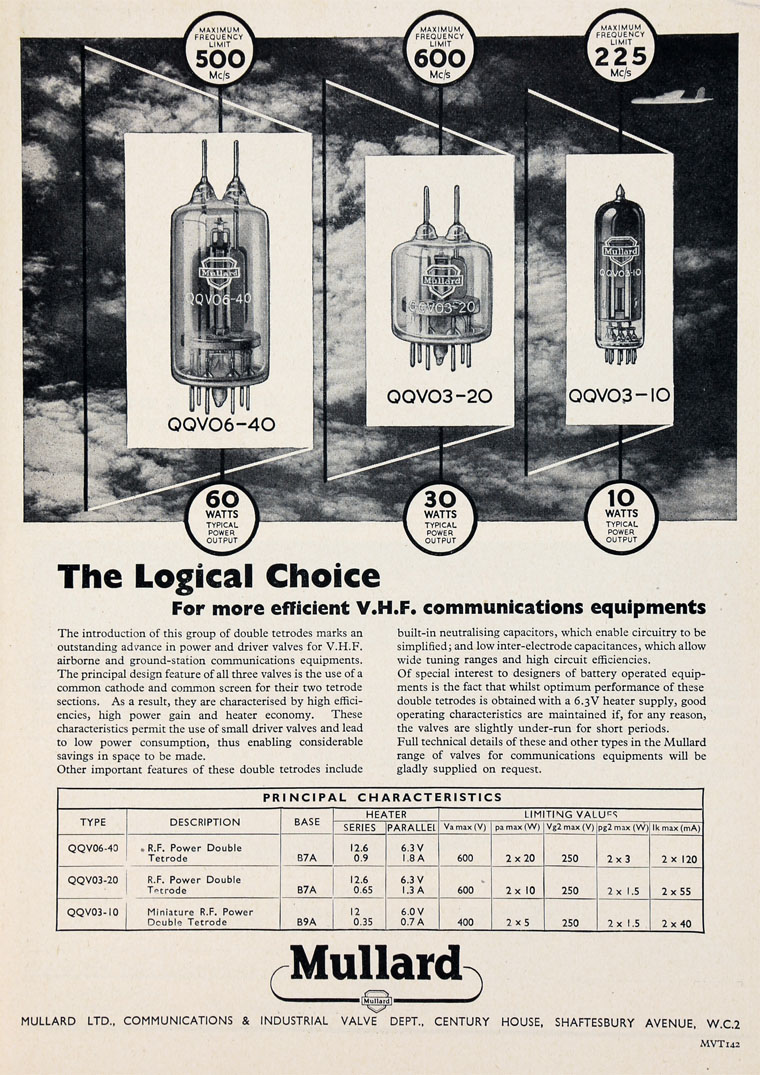 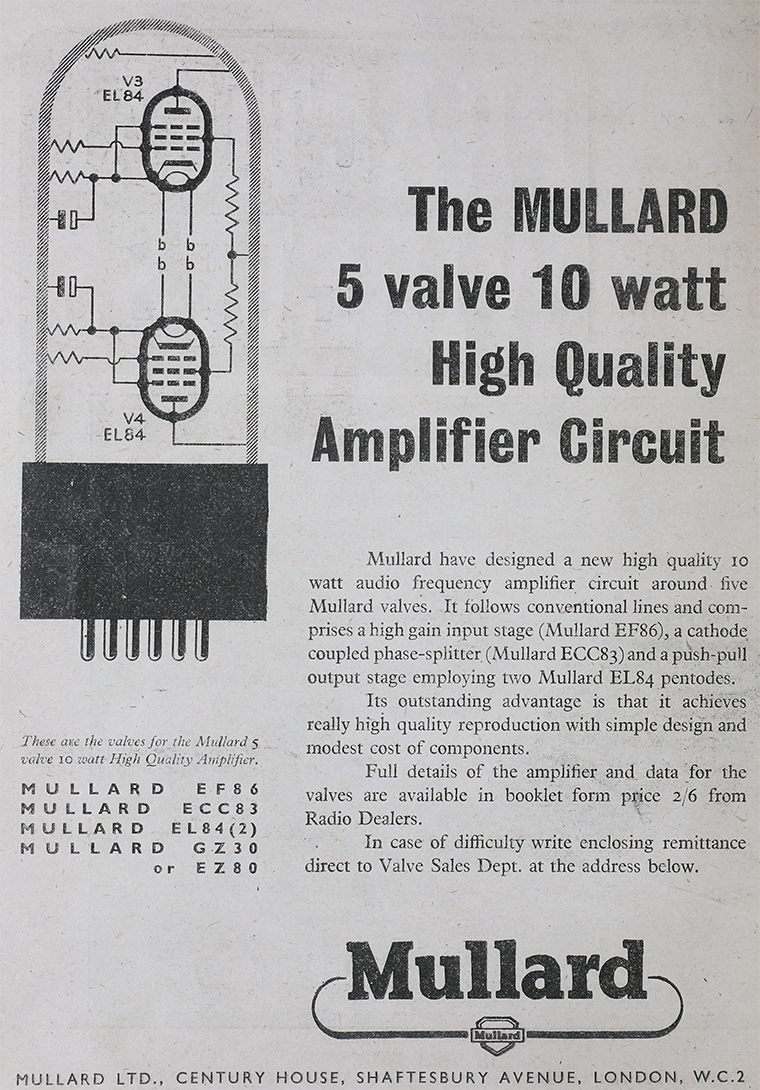 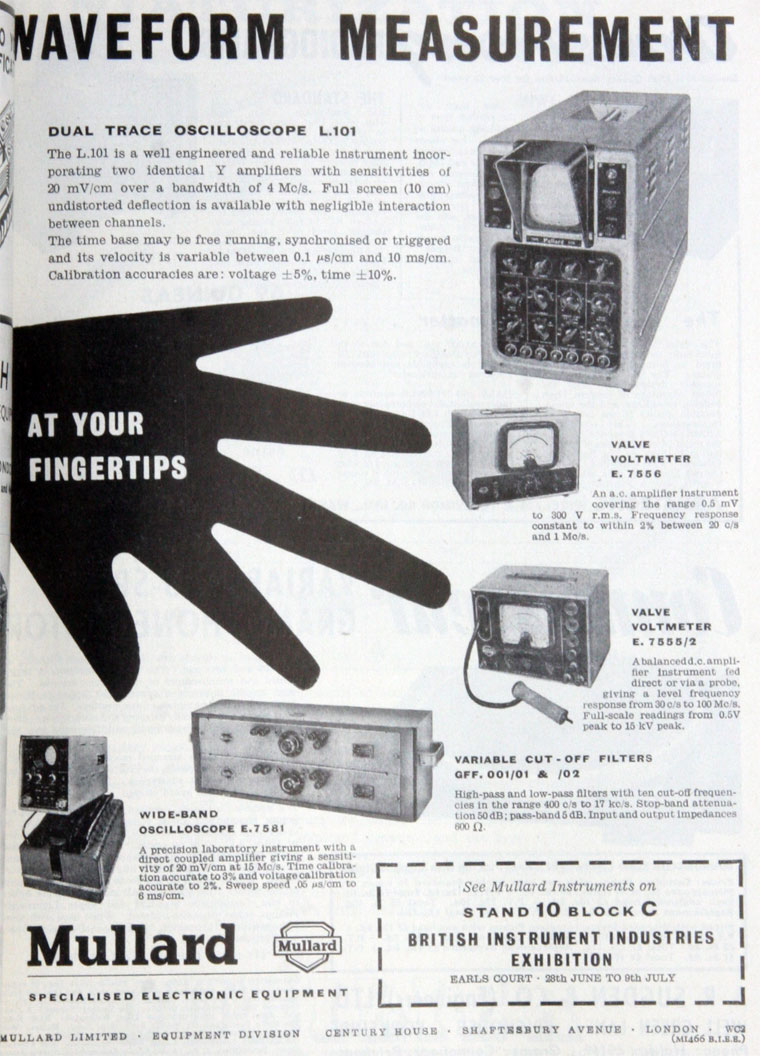 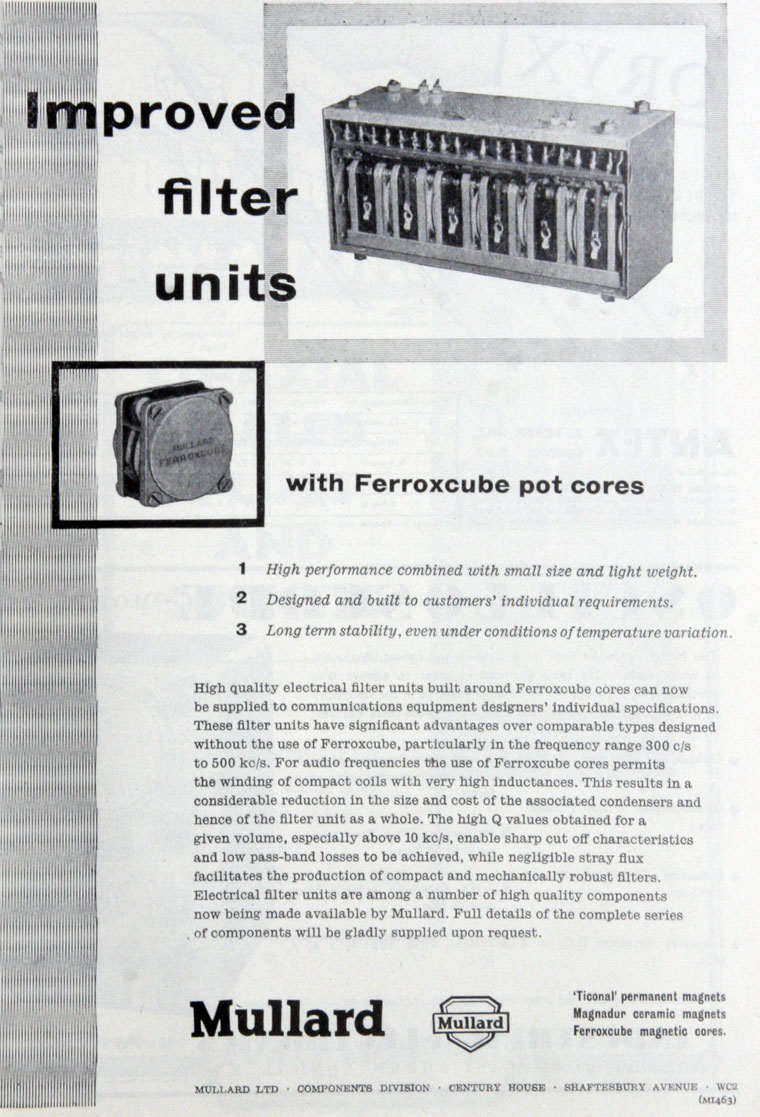 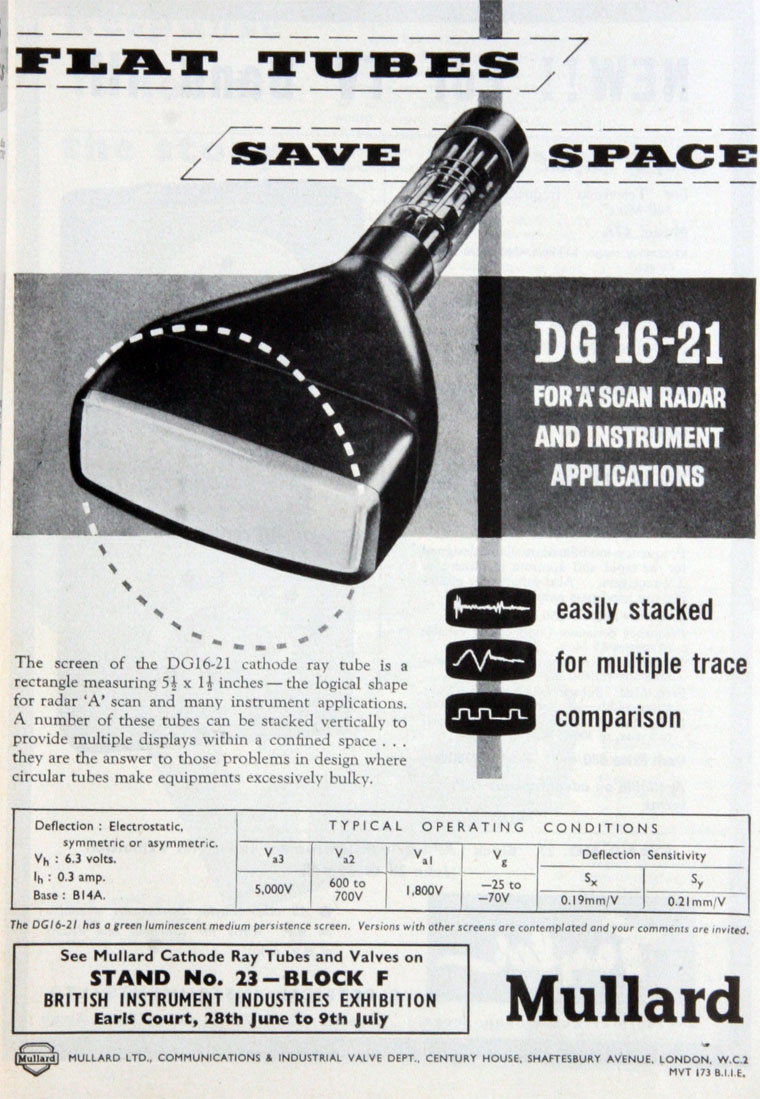 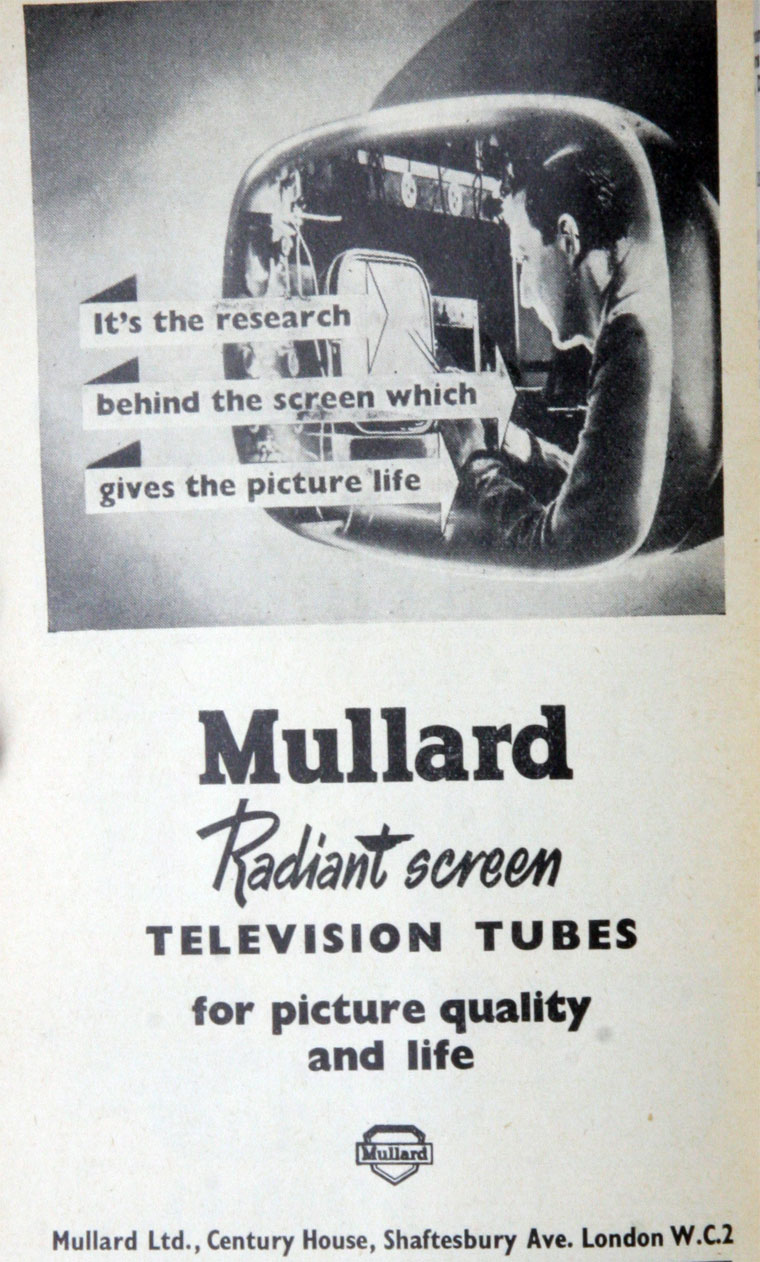 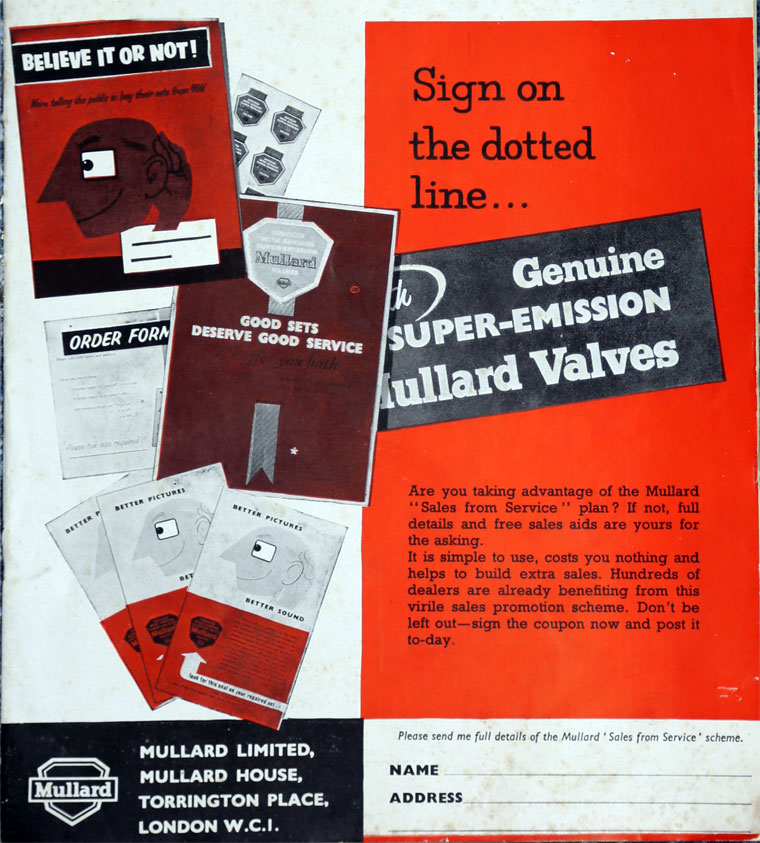 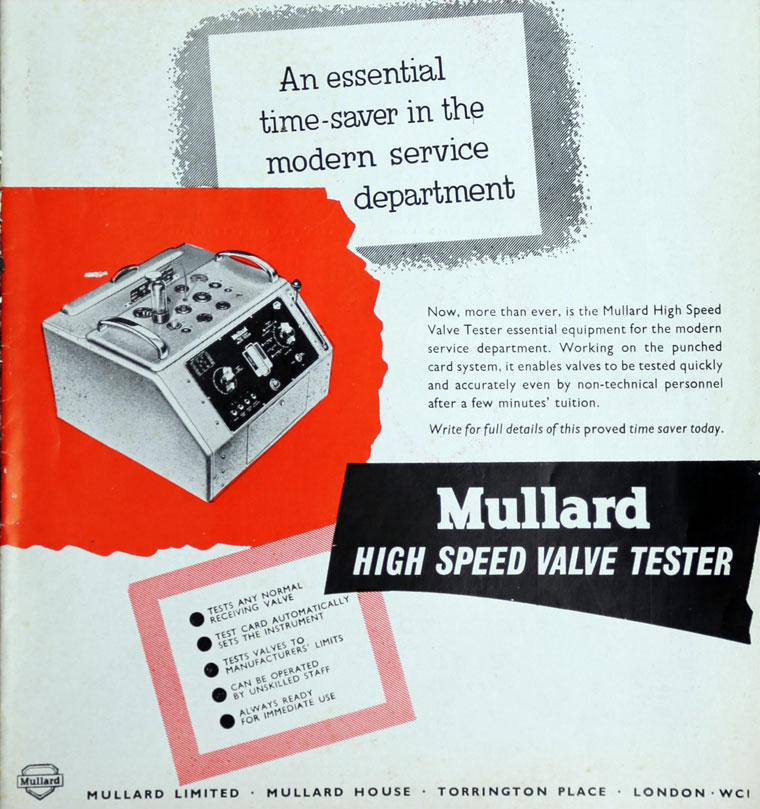 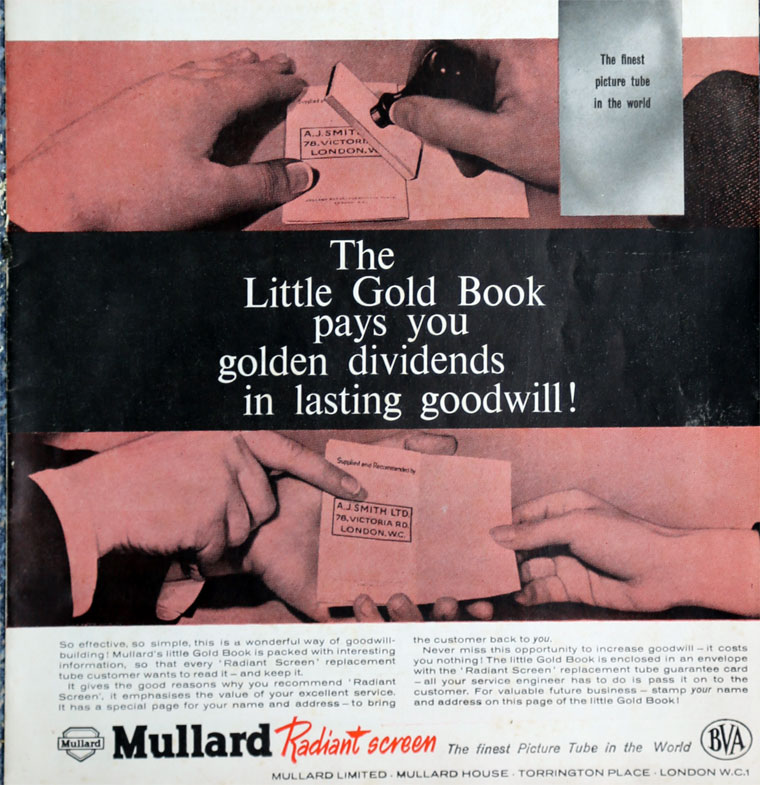 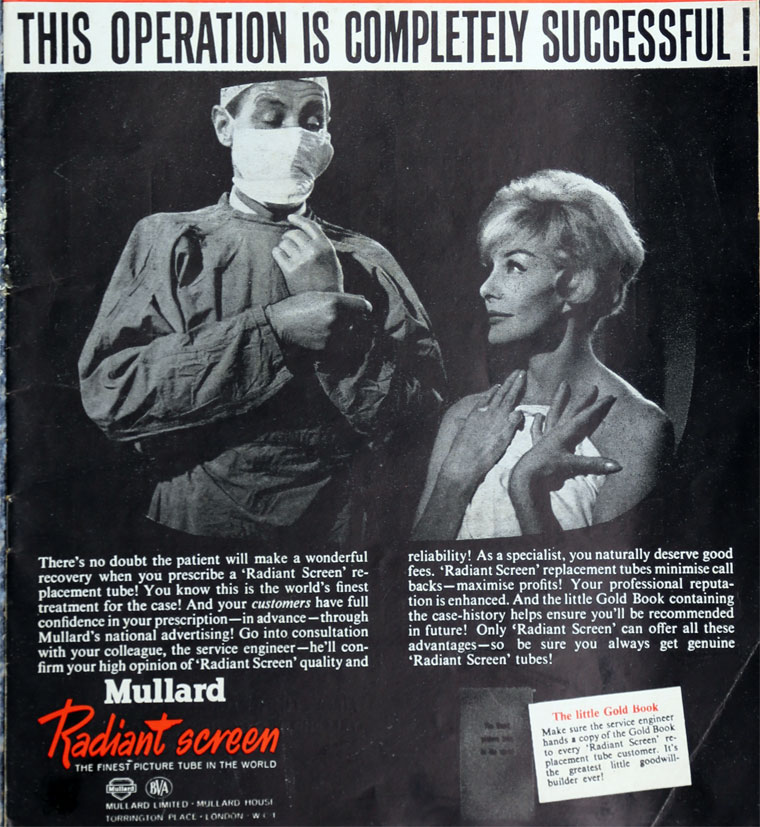 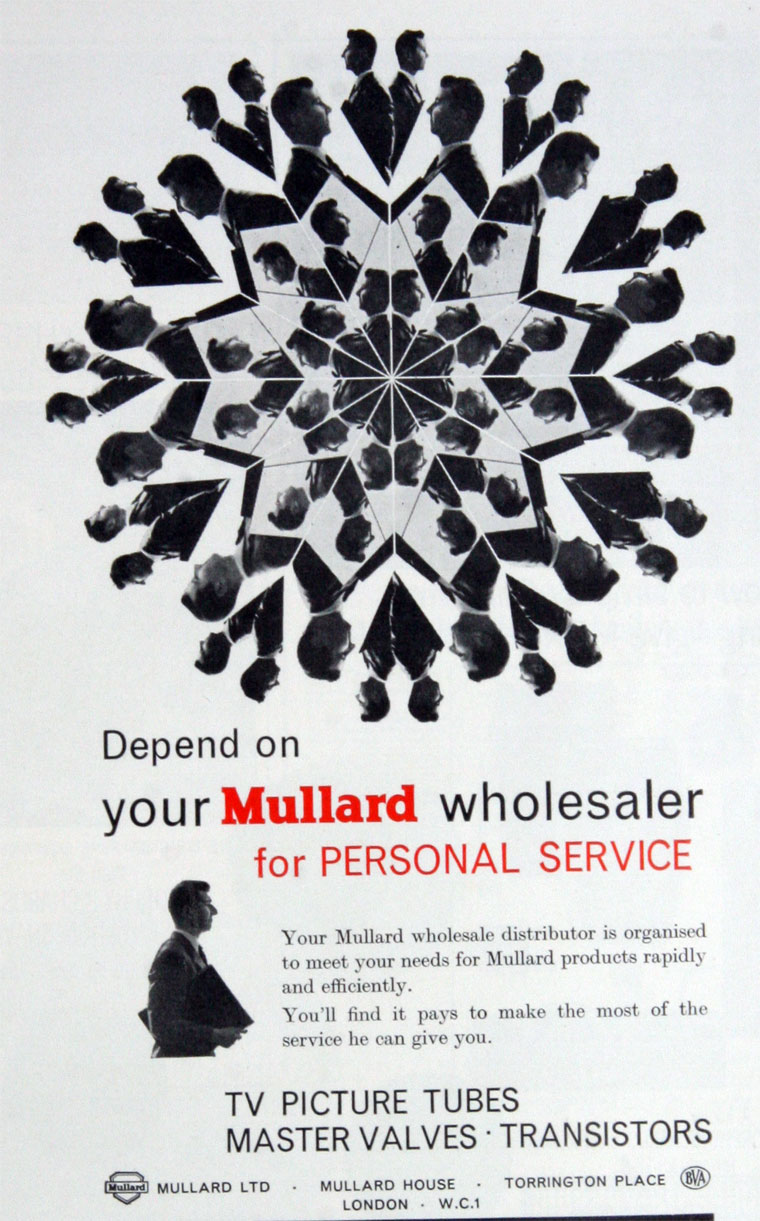 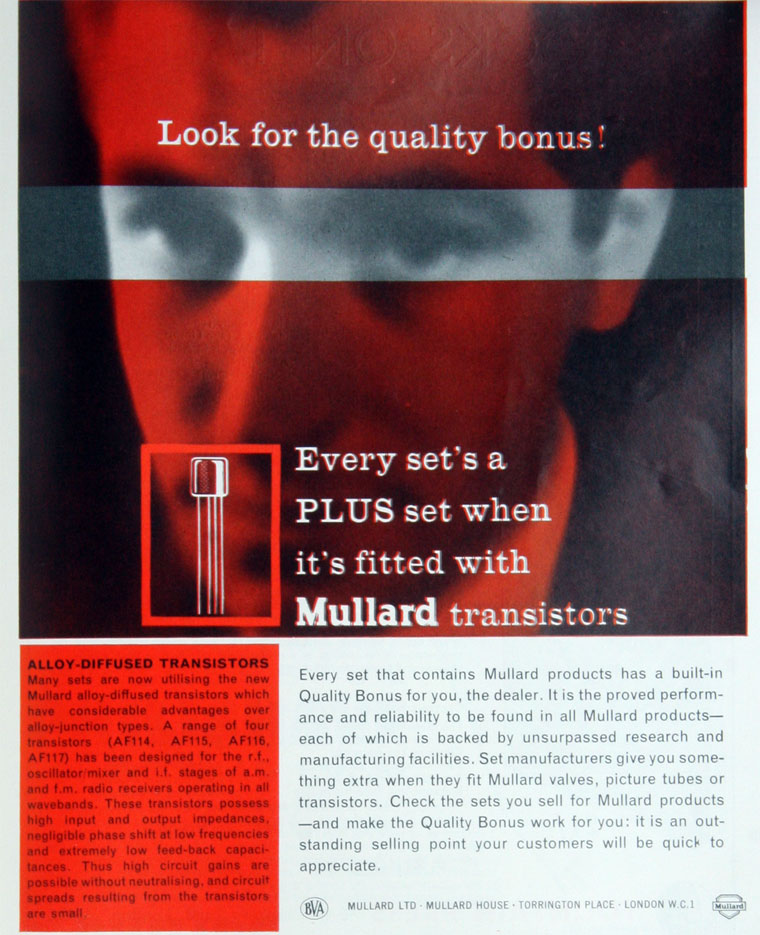 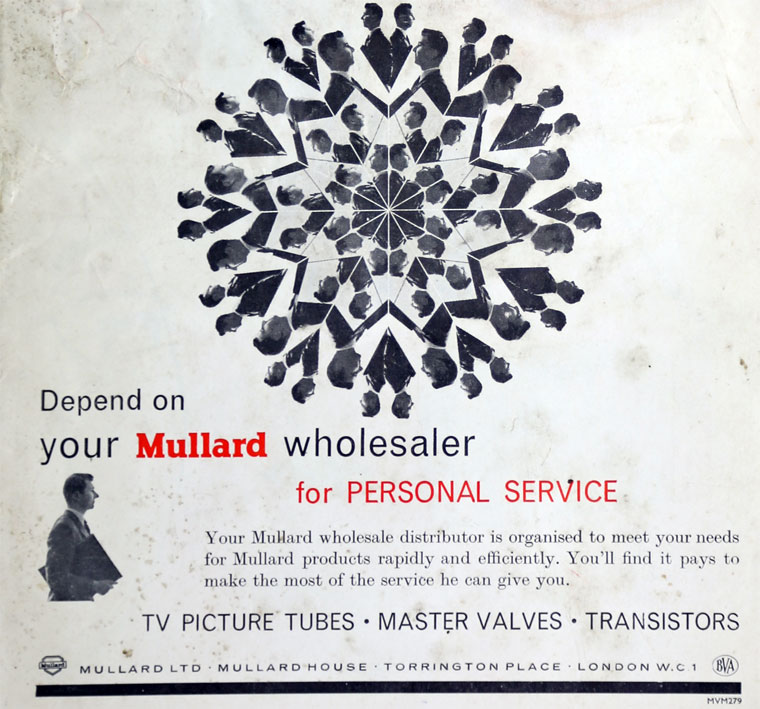 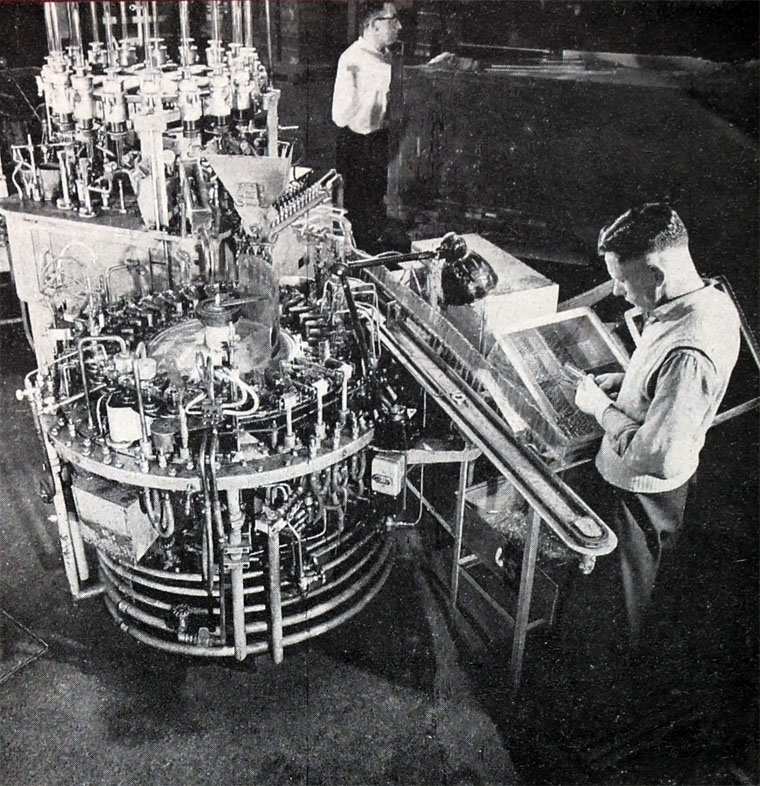 Mullard was a British manufacturer of electronic components and domestic appliances.

1920 The Mullard Radio Valve Co Ltd. of Southfields, London, was founded by Captain Stanley R. Mullard, who had previously designed valves for the Admiralty before becoming managing director of the Z Electric Lamp Co.

The company soon moved to Hammersmith, London and then in 1923 to Balham, London.

1924 Needing further finance to support development, Mullard sold half its shares to N. V. Philips of the Netherlands[1]. This partnership with Philips also helped to meet the technical demands of the newly formed British Broadcasting Company (later Corporation) or BBC. The valves produced in this period were named with the prefix PM, for Philips-Mullard, beginning with the PM3 and PM4 in 1926.

1925 N. V. Philips of the Netherlands registered a UK subsidiary Philips Electrical which held its shares in Mullard [2]

1928 the company introduced the first pentode valve to the British market.

1929 Mullard opened a new manufacturing plant at Mitcham, Surrey in 1929.

1929 Stanley Mullard resigned as managing director of Mullard Radio Valve Co, and of Mullard Wireless Service Co but continued as chairman of the latter[3]

1936 A second building was added at Mitcham. Both buildings had a very distinctive flat roof construction and were very similar to those at Philips' headquarters in Eindhoven, Netherlands. Co-sited with the Mullard buildings was the manufacturing complex for Philips Radios. Mitcham was also home to the Mullard Application Laboratory.

1938 Mullard opened a new plant in Blackburn, Lancashire, in conjunction with the local authority as a way of addressing local unemployment; made radio components and wire[4].

Postwar: The Blackburn factory was supplying valves to most of the domestic equipment manufacturers.

1948 22nd April. The subsidiary Mullard Wireless Service Co was renamed Mullard Electronic Products to reflect the company's expansion of activities beyond that of purely "wireless" and into industrial, scientific and communications activities.

In 1951 Mullard was producing the LSD series of photographic flash tubes.

The first transistors produced by Mullard were the OC50 and OC51 point-contact types, which were not widely used.

In 1953 Mullard moved to junction transistors, beginning with the plastic-cased OC10 series. These were followed by the glass-encapsulated OC70 series, which were produced in large numbers and copied by other companies, such as Valvo (another Philips subsidiary), Intermetall and Siemens A.G. in Germany, and Amperex in the USA.

1957 Philips-Mullard helped to set up the Mullard Radio Astronomy Observatory (MRAO) at the University of Cambridge.

1960 Mullard had 75% (by volume) of the British market for semiconductors (50% by value)[6]. GEC and Texas Instruments (Bedford) had about 15% (by value) each with AEI on 10%; the remainder was shared amongst more than 10 other companies.

Mullard had factories in Southport and Simonstone, Burnley both in Lancashire. There was also a sister factory in Durham. Other factories included those at Fleetwood and Lytham St. Annes and a feeder factory at Haydock.

1962 Formation of Associated Semiconductor Manufacturers with GEC to combine semiconductor (ie transistor) development and production of the 2 companies; Mullard owned two-thirds of the company[8]

1964 the company produced a prototype electronic desktop calculator as a technology demonstrator for its transistors and cold cathode indicator tubes.

1967 The Royal Society Mullard Award for young scientists and engineers was set up.

1968 Major expansion at the plant at Simonstone which was making a million colour television tubes. Production of passive components was centralised at Blackburn.

1974 Cut-back in production at TV components factory at Southampton; short time working at Simonstone and Dunfermline[10]

1981 The feeder factory at Haydock was closed.

Early 1980s, Mullard manufactured some of the earliest teletext decoding modules made in the UK.

As of 2007, the "Mullard" brand has been revived by Sovtek, producing a variant of the EL34.