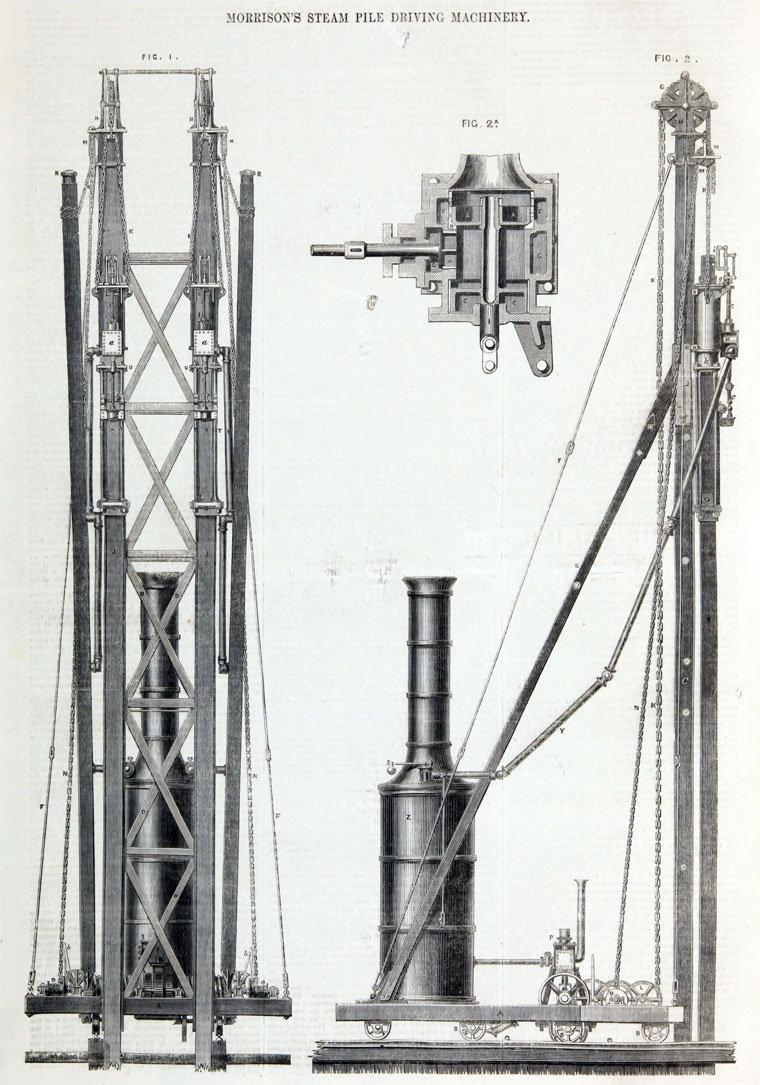 Produced by Robert Morrison and Co

1856: 'Hay-Hole Docks in the River Tyne—Patent Pile Driver.—
There is now every prospect of the Hay-Hole Docks being finished shortly, and it is only to be regretted that steps were not sooner taken to ensure their speedy completion. We have been informed that the delay has, in a great measure, been caused the extreme hardness of the soil, and the inability of the pile drivers formerly used to drive the piles to the requisite depth. That difficulty has now, however, we are glad to say, been completely overcome by the Patent Pile Driver, invented Mr. R. Morrison, of the Ouseburn Engine Works, whose patent forge hammer, now so highly spoken of, and so much patronized throughout the kingdom, as well as on the continent, laid, no doubt, the foundation of his new invention of the pile driver. The latter is now in full operation at the docks, and, from its peculiar formation, drives two piles simultaneously, and with such rapidity, that in the same time which took the former pile drivers, twelve in number, and worked by engine, to drive sixty piles, Mr. Morrison's drives one hundred and twenty, and it could do many more if constantly supplied with piles, as its capabilities would enable it to drive two thirty-six feet piles twenty-five feet into the ground in about ten minutes, notwithstanding the hardness of the sod, whilst the machines formerly used took a day and a half to drive one. The sea-wall in the above docks is composed of two rows of piles, five and a half feet apart, and the patent pile driver drives before it both rows at once, and requires no temporary piles to carry it upon, like the former pile drivers, but is itself carried upon the piles which it has driven. The ingenuity displayed in the construction of the pile driver is highly creditable to the patentee, and we have no doubt the invention only requires to be known to bring it into general use.' [1]