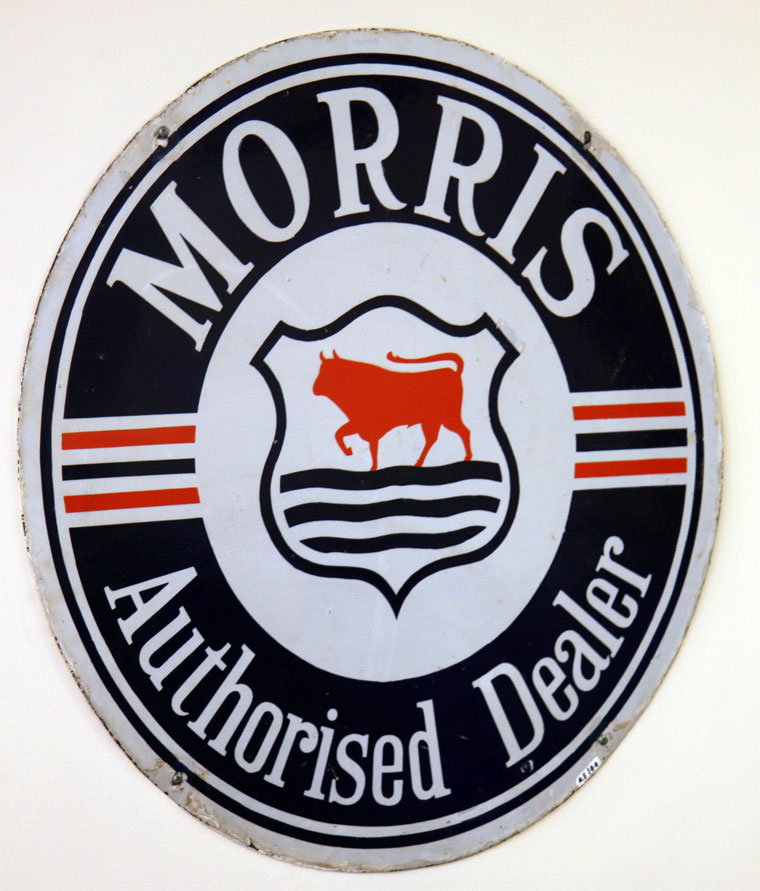 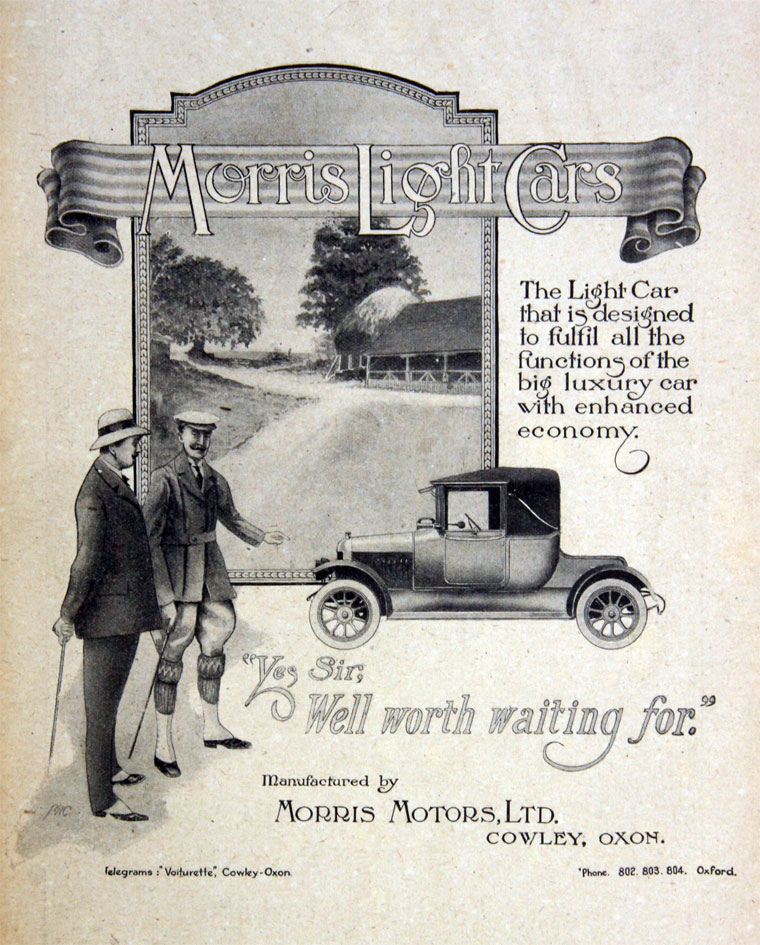 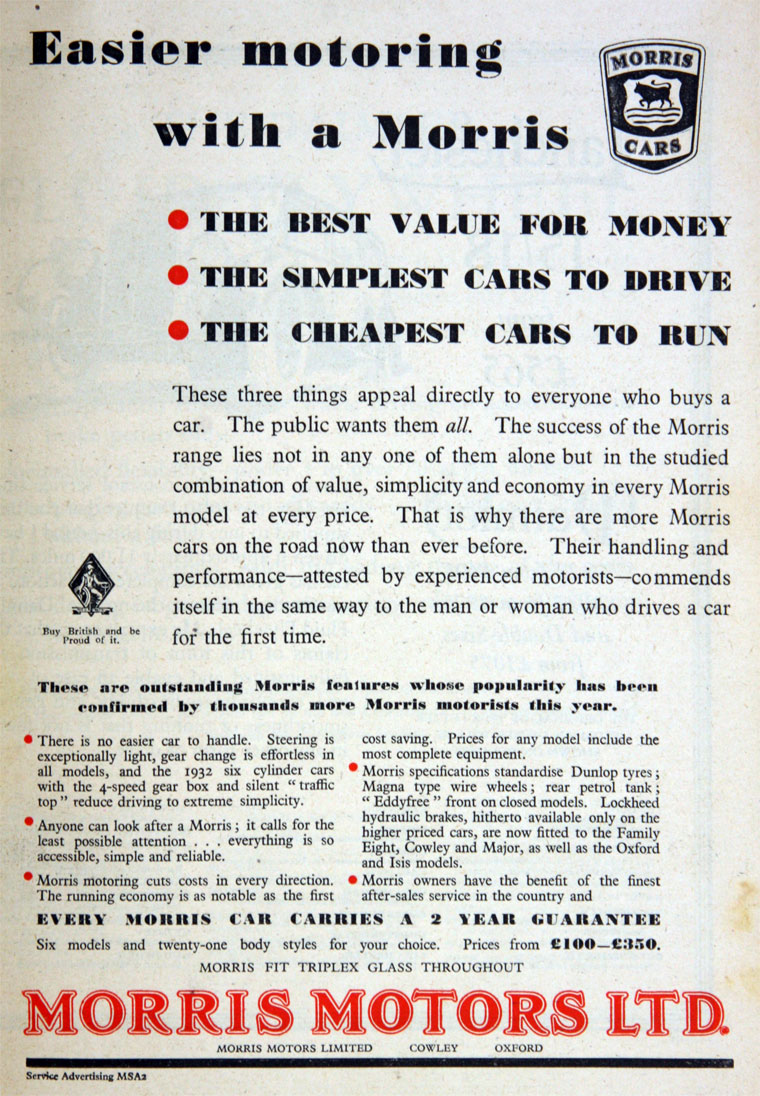 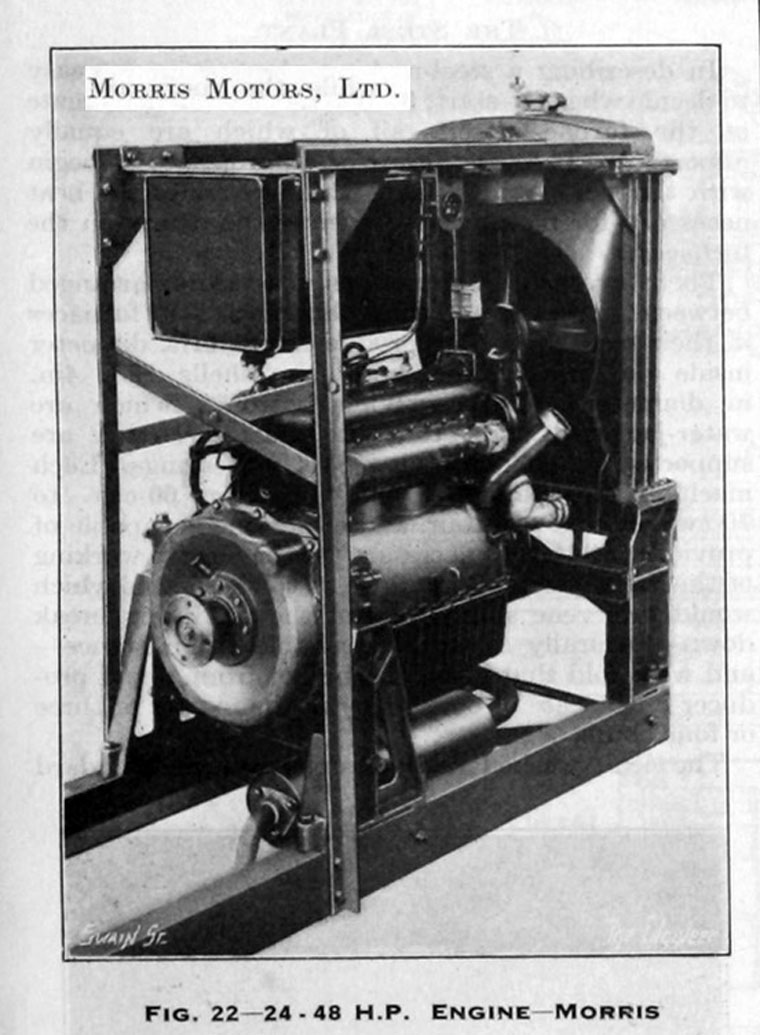 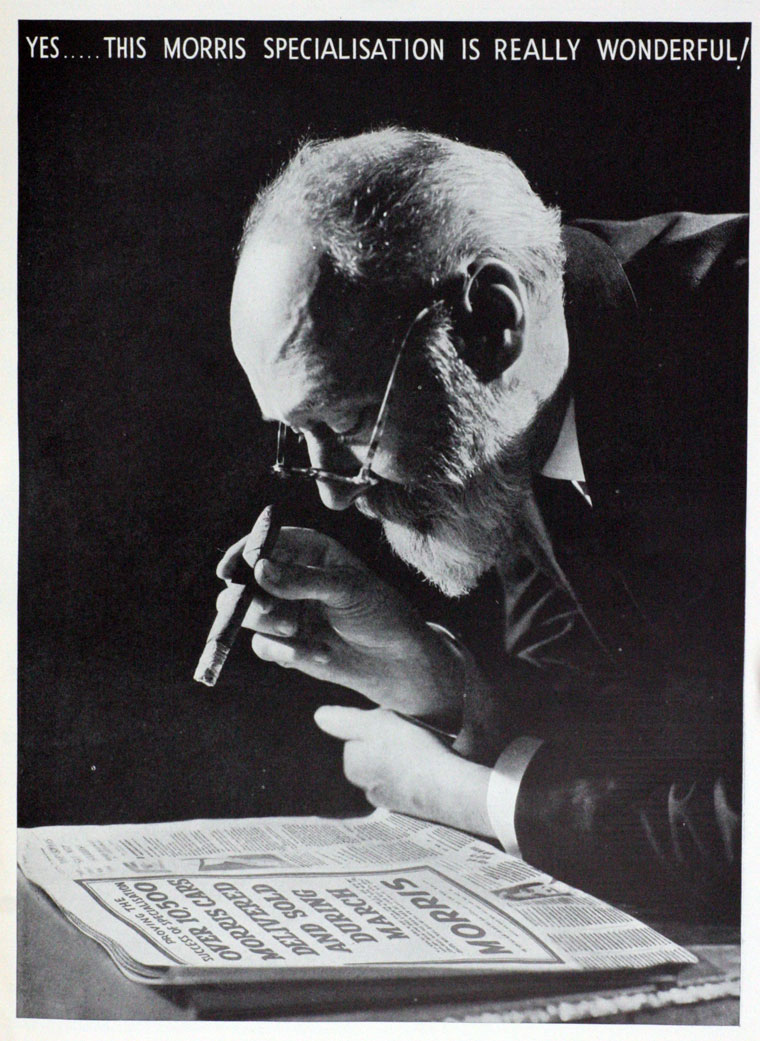 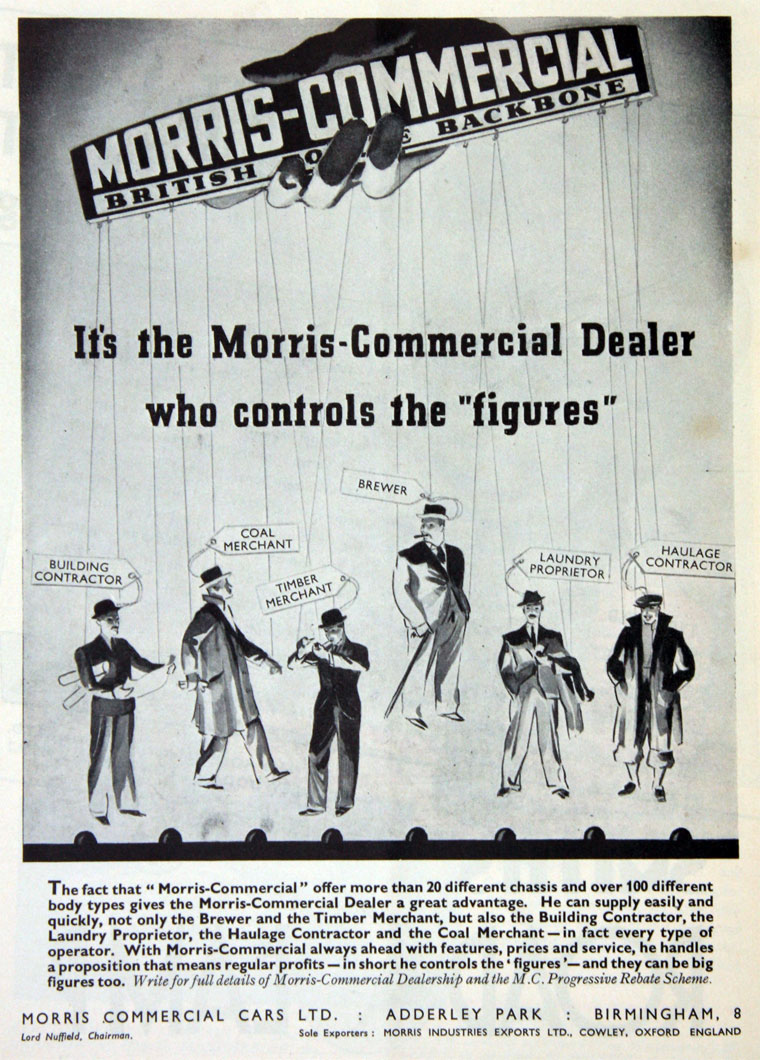 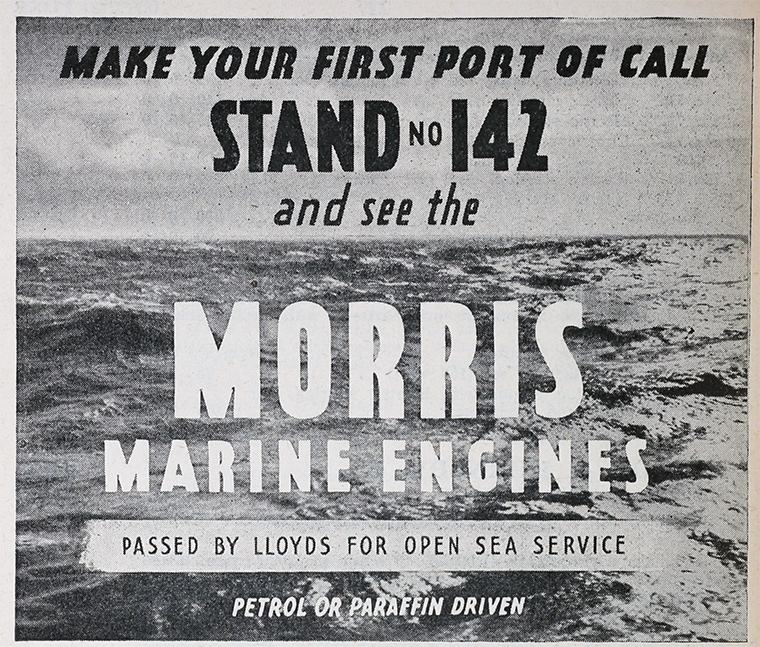 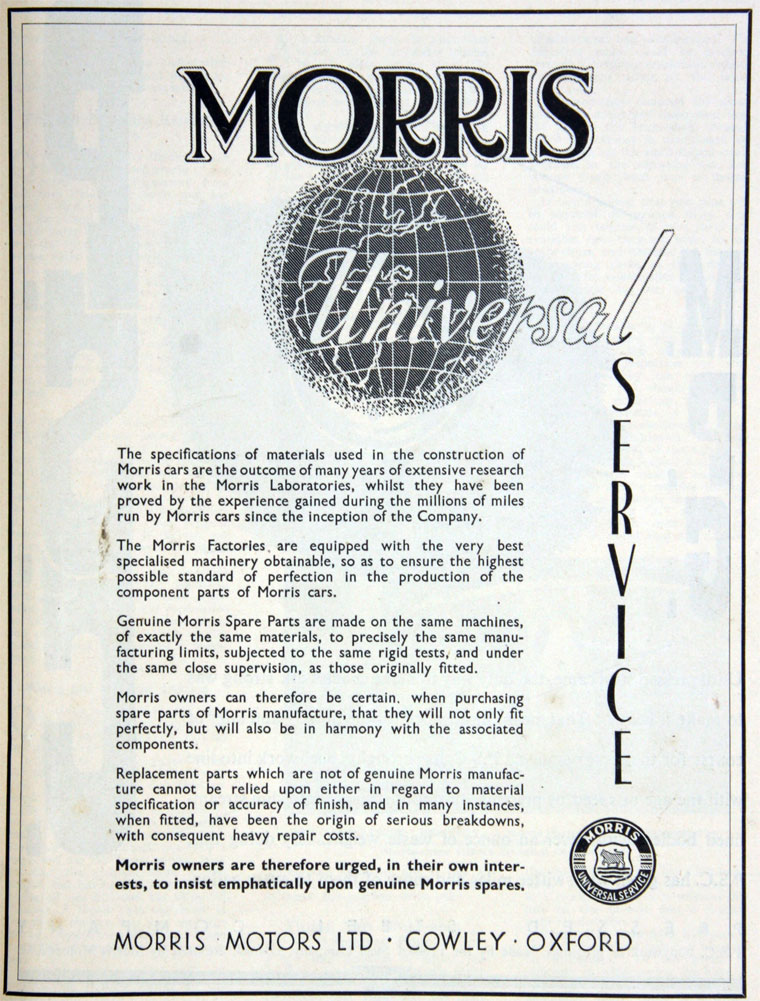 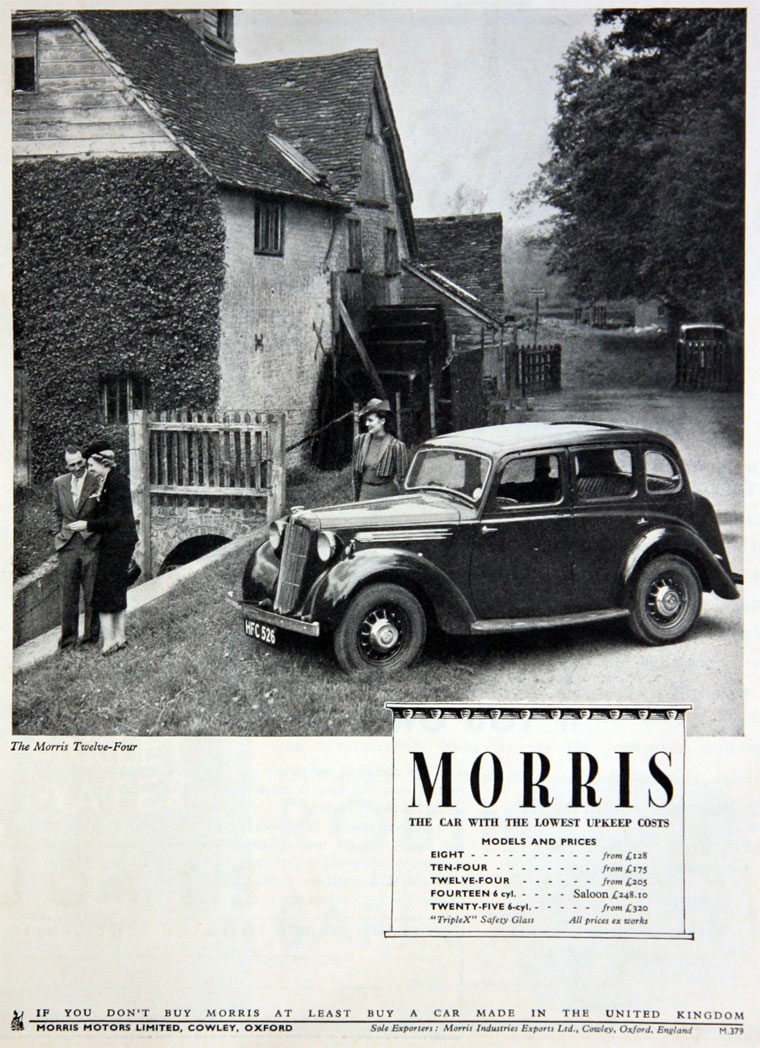 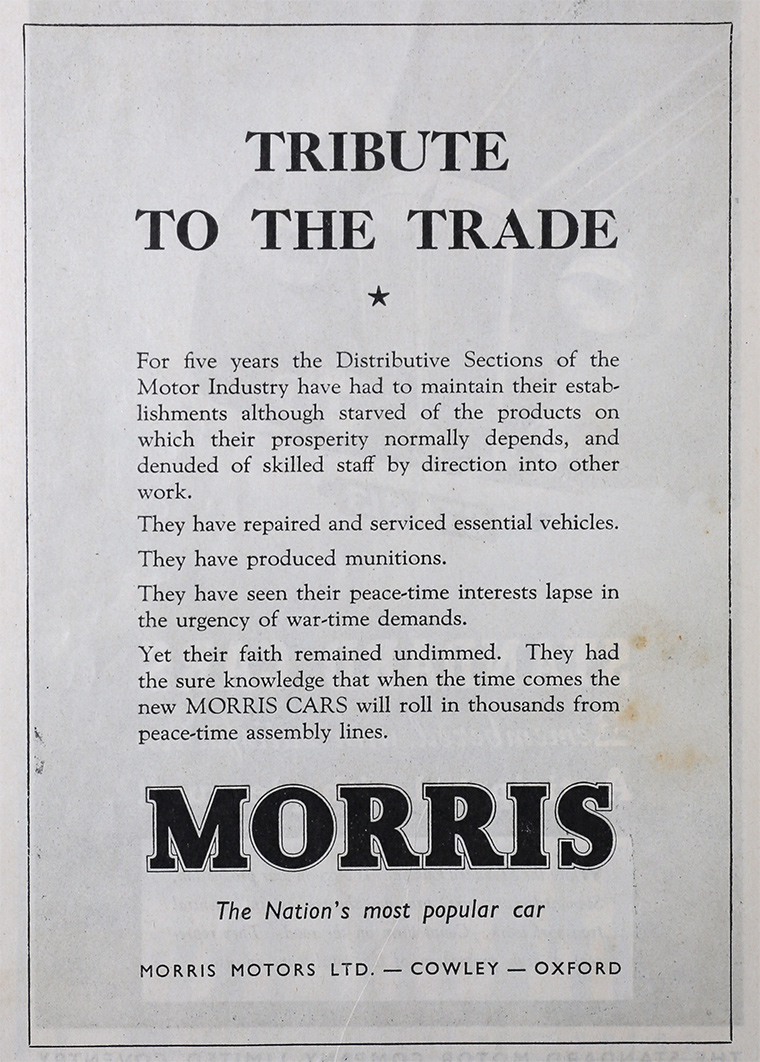 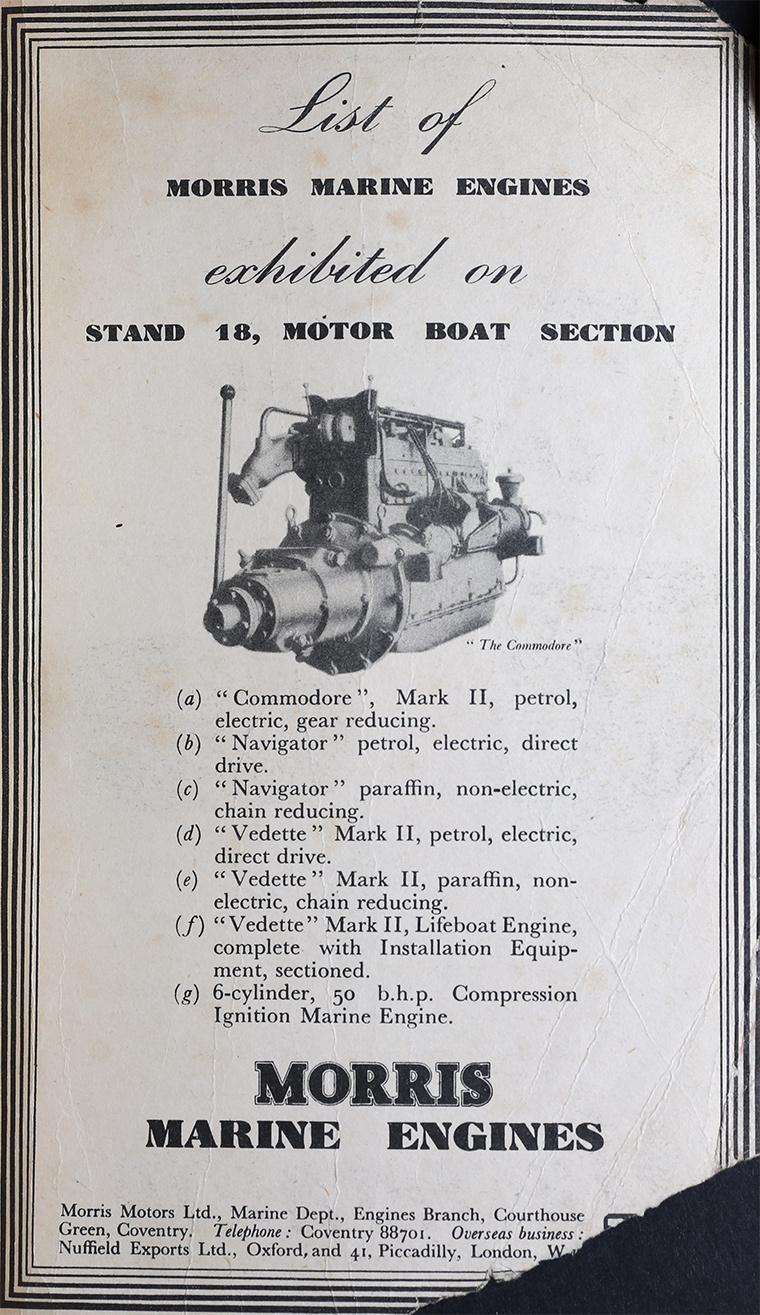 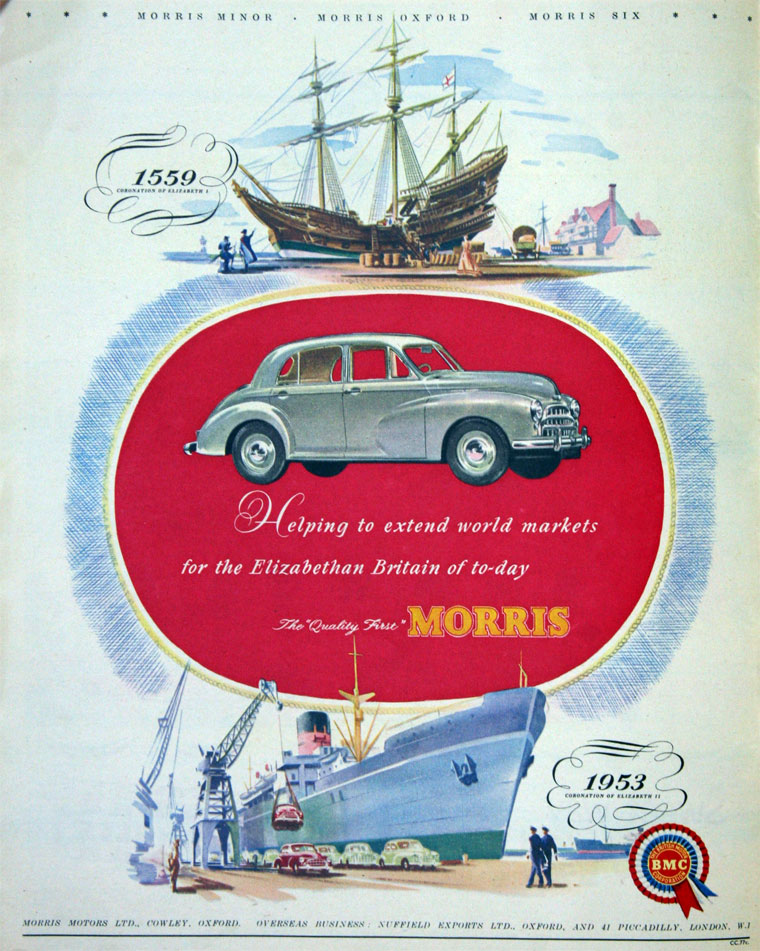 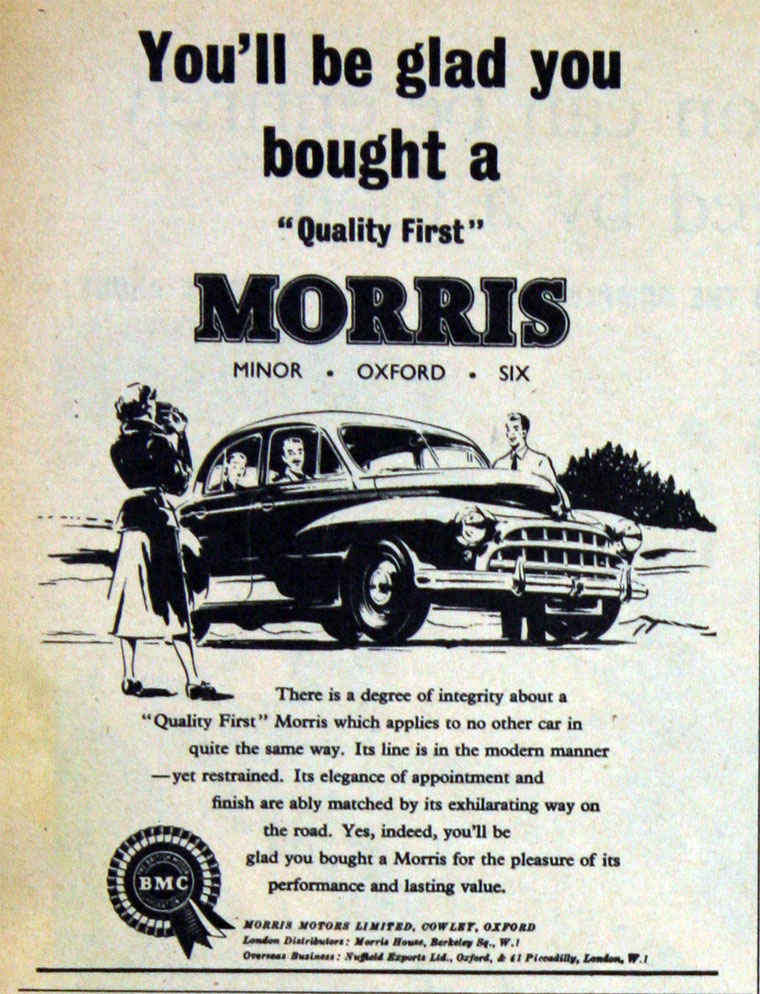 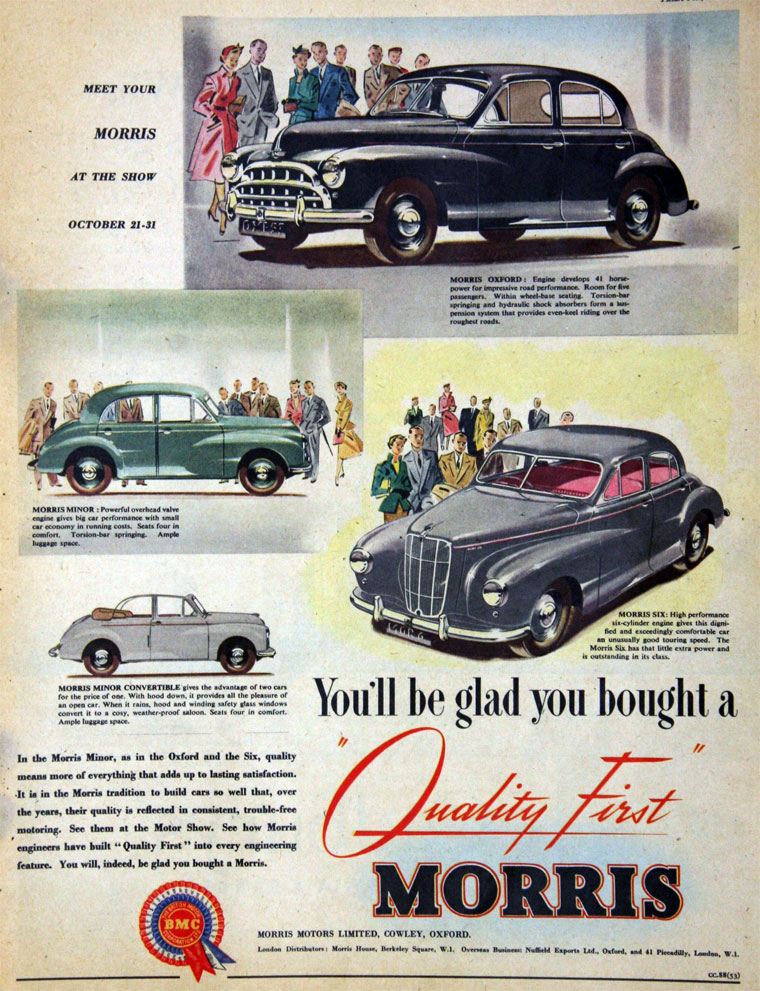 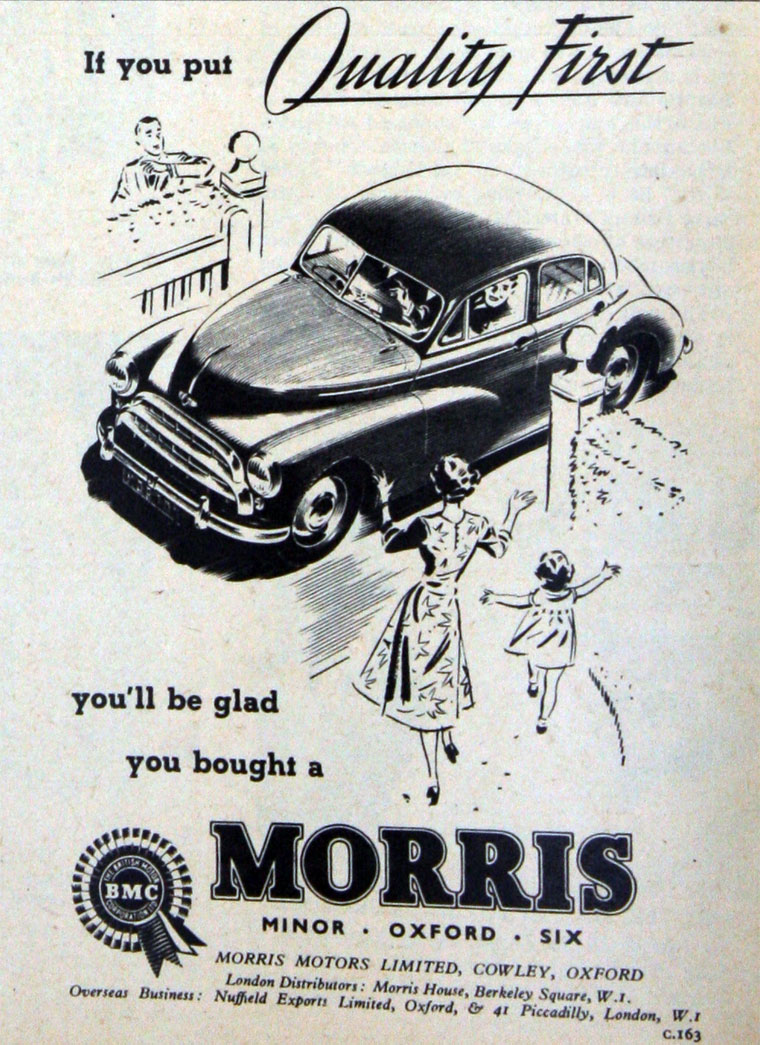 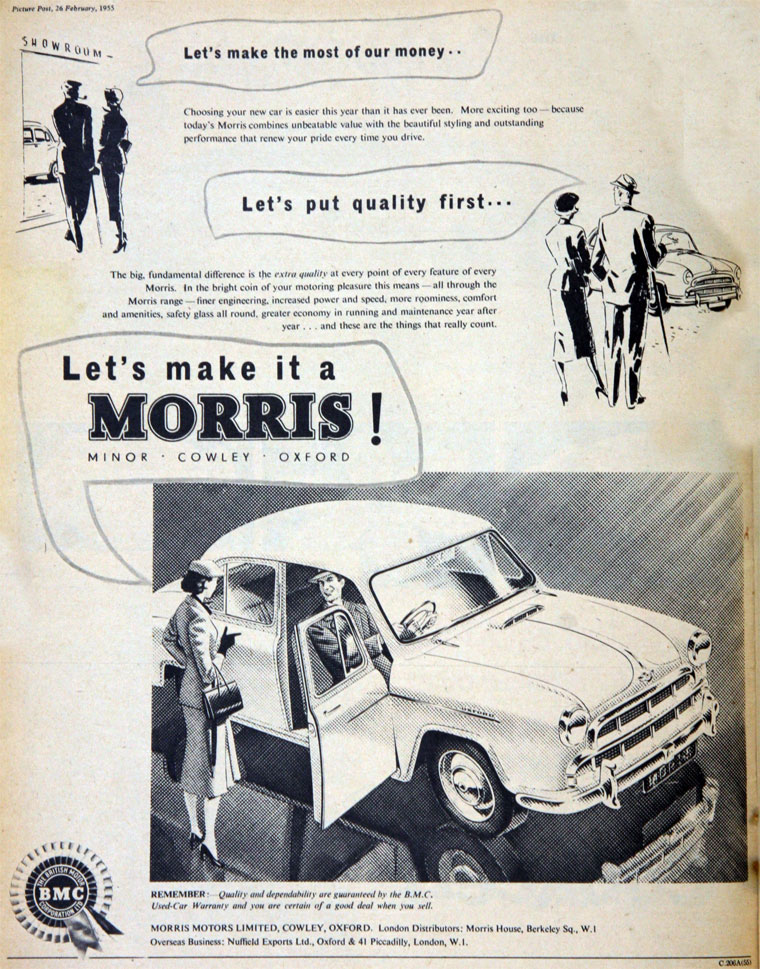 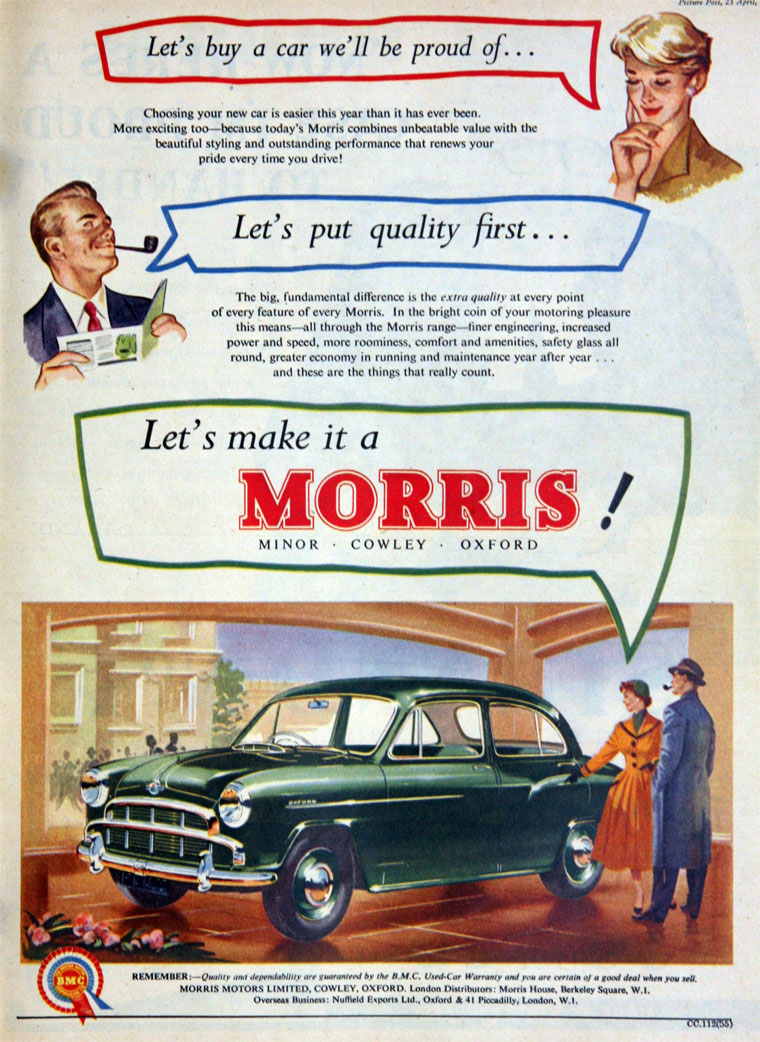 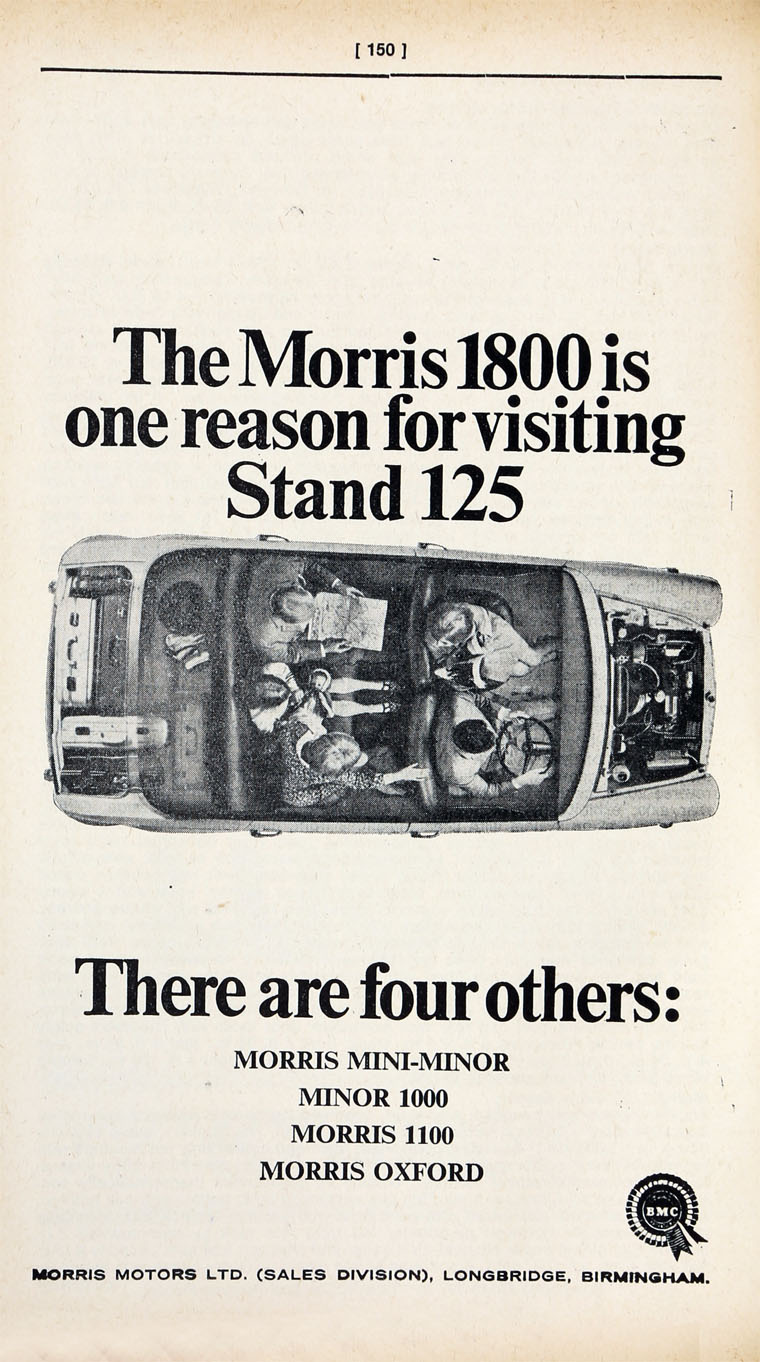 The Morris Motor Company of Cowley, Oxford was a British manufacturer of cars and lorries. After the incorporation of the company into larger corporations, the Morris name remained in use as a marque until 1984. Motorcycles were also produced from 1902 to 1905.

Production rose from 400 cars in 1919 to 56,000 in 1925. During the period 1919–1925 Morris built or purchased factories at Abingdon, Birmingham, and Swindon to add to that in Oxford. Morris pioneered the introduction to the United Kingdom of Henry Ford's techniques of mass production.

c.1920 Acquired the business of Hollick and Pratt, body-makers, Coventry.

1921 February. In a time of difficult sales and against the general trend, Morris reduced the prices of the Morris-Cowley and the the more highly specified Morris-Oxford.[1]

1923 Morris had a policy of buying up suppliers with, for example, Hotchkiss in Coventry became the Morris Engines (Coventry) Ltd in 1923. Leonard Lord was working for Hotchkiss and became part of Morris at this time

1924 Took over the factory previously occupied by E. G. Wrigley and Co in Birmingham, and there commenced the manufacture of Morris Ton Trucks and Commercial Vehicles. Frank George Woollard, the assistant MD of Wrigley moved to Morris at Oxford.

1924 The head of the Morris sales agency in Oxford, Cecil Kimber, started building sporting versions of Morris cars, called MG after the agency, Morris Garages. The MG factory was in Abingdon, Oxfordshire.

1926 Became a public company: Morris Motors (1926) Ltd; although Morris kept the Ordinary Shares for himself. It acquired Morris Motors Ltd, and the associate companies Morris Engines (Coventry) Ltd, Hollick and Pratt Ltd, and Osberton Radiators Ltd, as well as the right to the allotment of about £500,000 of shares in the Pressed Steel Co[2].

1926 Took over their main carburettor supplier, S. U. Co Ltd.

1927 In competition against, amongst others, Herbert Austin, Morris purchased the bankrupt Wolseley Motor Company and the company passed into his personal control. Wolseley were at this stage in fairly advanced development of an overhead camshaft 8hp car, which Morris launched as the first Morris Minor in 1928 (this was also the basis of the original MG Midget, launched in 1929).

In 1932 Morris appointed Leonard Lord as Managing Director; he swept through the works, updating the production methods and introducing a proper moving assembly line.

1935 Issue of shares to pay for the acquisition of Wolseley Motors Ltd and M. G. Car Company Ltd[5]

1936 Morris and Lord fell out, and Lord left, threatening to "take Cowley apart brick by brick".

1936 Further issue of shares to enable Morris Motors Ltd to acquire Morris Industries Exports Ltd and Morris Commercial Cars Limited, the commercial vehicle enterprise; the public owned the Preference Shares as well as a quarter of the ordinary shares. S. U. Carburettor Co Ltd was incorporated by Morris Motors to acquire from Morris Industries the business of carburettor manufacture trading under the name of S. U. Co[6].

1938 Nuffield purchased the bankrupt Riley (Coventry) and Autovia companies from the Riley family and quickly sold them to his own Morris Motor Company. With the addition of Wolseley later that year, the combined enterprise became known as the Nuffield Organisation.

1952 The Nuffield Organisation merged with Austin to form the British Motor Corporation.