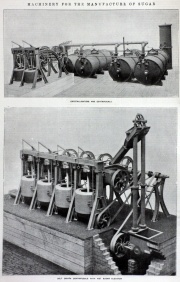 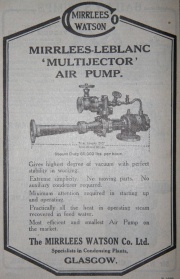 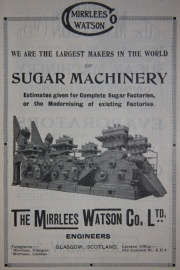 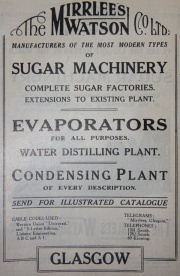 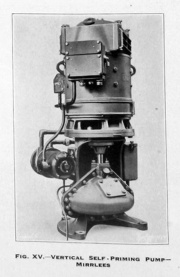 Note: During its long history the company's name has often been changed

1840 An engineering partnership was founded in Glasgow to manufacture cane sugar processing machinery. This business was founded by three brothers, Peter McOnie, William McOnie and Andrew McOnie and the original title of the firm was P. and W. McOnie.

By 1848 the McOnie's concern had manufactured fifty engines and fifty mills. In that year the partnership was dissolved, William (later Sir William) McOnie and Andrew McOnie formed W. and A. McOnie

1852 When Peter McOnie died in 1851, Mr Mirrlees appointed William Tait as manager and the firm continued as Mirrlees and Tait

1858 when Mr Tait became a partner, the name of the firm then changed to Mirrlees and Tait. The company remained under this title and direction for ten years. During this period the firm acquired from David McColley Weston of Boston, USA, sole rights for his inventions (the Weston centrifugal of 1868) in the United Kingdom and the principal cane sugar countries of the world[2].

1883 The Weston inventions increased development in the firm to such an extent that in 1883 the partners, with Mr John Laidlaw as Managing Director, built a new works and formed a new, separate company Watson, Laidlaw and Co to manufacture centrifugal separators. This continued in operation until at least 1961.

1868 On the failing health of Mr Tait, Mr Watson, later Sir W. Renny Watson, was taken into partnership and the title of the firm became Tait and Watson.

1870 William Tait died but the title of the firm remained unchanged until 1882.

1885 Mr. A. Robertson and J. C. Hudson, who had been for some time in the management of the business, were admitted as partners and the title of the firm changed to Mirrlees Watson Co.

1887 The patent rights of Home T. Yaryan in the evaporating apparatus which bears his name, were acquired in 1887, and the intimate association of the firm with the Yaryan Company resulted in the reconstruction of the company as Mirrlees, Watson, Yaryan and Co in 1889.

1889 Incorporated as a limited company.

1896 On the motion of R. A. Robertson, three members of the Board of the Mirrlees, Watson and Yaryan Company formed a committee to make investigations into the practical possibilities of a new internal combustion engine patented by Dr Rudolf Diesel.

During March 1897 the committee visited Germany and, after studying Dr Diesel's 20 BHP engine, an agreement was signed whereby the patentee granted an exclusive licence for the manufacture and sale of the diesel engine in Great Britain.

The first engine was completed in November 1897. This was the third diesel engine in the world and after exhaustive tests by Professor Watkinson of the Royal Technical College, Glasgow, was later put into regular service on the company's premises. It is now to be seen in the Anson Engine Museum. This engine is a single cylinder, four cycle, air injection unit, 300 mm bore by 460 mm stroke, developing 20 BHP at 200 r.p.m., the engines being built up to six cylinders in size and many hundreds of this type were supplied as the range extended.

Before this type of engine was superseded, it was sold in a modified form as an airless injection engine. Various difficulties arose following the commencement of building diesel engines and these proved a heavier demand on the financial resources of the company than the directors were prepared to maintain.

1899 The Dieselmotoren Company of Augsburg bought back the exclusive licence in exchange for a non-exclusive licence and a considerable sum of money. Also in that year the Company was again reconstructed and became the Mirrlees Watson Co.

1900/2 Charles Day became manager and under his direction rapid progress was made with diesel engine manufacture.

c.1903 The success of the 50 BHP per cylinder type engine led to a demand for a lighter engine with higher speeds and the Admiralty ordered two engines, each of 160 BHP at 400 r.p.m. for installation in the battleship HMS Dreadnought. this battleship was the first British vessel to have diesel engines installed on board. The type fitted developed 40 BHP per cylinder and were of the enclosed type with forced lubrication, with a bore of 11.5 inches and a stroke of 12 inches. this diesel installation was the forerunner of many more units installed on His Majesty's Ships for auxiliary purposes.

1906, the Admiralty specification required lightweight diesel engines for the propulsion of pinnaces and Mirrlees designed a four cylinder unit of 120 BHP at 400 r.p.m. These engines had bed plates of aluminium and columns of manganese bronze. The piston diameter was 9 and three quarter inches with a stroke of 12 inches.

1908 The diesel engine business of the company at Glasgow increased so rapidly that a decision was reached to manufacture diesel engines at Hazel Grove, near Stockport in Cheshire. Charles Day, later Chairman of the Company, went to Cheshire to construct a factory which opened during October 1908 for the manufacture of diesel engines ranging in power from 50 BHP to 750 BHP. With the financial assistance of H. N. Bickerton of the National Gas Engine Co formed Mirrlees, Bickerton and Day.

1926 Amalgamation of Mirrlees Watson Co of Glasgow with Mirrlees, Bickerton and Day[4]

WW2 Over four hundred engine types of varying powers were produced during the war years. Some of these engines provided power for radar, radio-location, airfield and various lighting systems for the Air Ministry. War Department requirements were met with engines for ordnance factories, War Department stores and mobile generating sets for emergency use at home and overseas. Mirrlees also supplied many engines for the propulsion of minesweepers, towing vessels and landing craft, as well as auxiliary generating sets for shipboard use. In addition, generating sets were supplied for many naval bases and fleet air arm stations.

1944 Associated British Engineering, owners of a large shareholding in Brush Group, acquired for cash the goodwill and assets of the diesel engine business of Mirrlees, Bickerton and Day. Mirrlees' Glasgow factory was to remain as part of the Mirrlees Co and would continue to operate as Mirrlees Watson Co, manufacturer of sugar machinery[5].

1957 The Brush Group was acquired by Hawker Siddeley

1961 Mirrlees National was created from the amalgamation of Mirrlees, Bickerton and Day with the National Gas and Oil Engine Co.

1967 The sugar machinery business, Mirrlees Company, was taken over by A. and W. Smith and Co and became Smith Mirrlees

1988 Smith Mirrlees was acquired by Fletcher and Stewart, sugar machine manufacturers of Derby.

1969 On 1st June 1969, Mirrlees National and Blackstone and Co, another Hawker Siddeley diesel company, were merged and the company now traded under the name of Mirrlees Blackstone.

1979 The first production engines of the MB275 type were built with a 275 mm bore. It was also in this year that the K Major was uprated to a 400 mm bore engine with a nominal output of 750 BHP per cylinder.

1985 Mirrlees Blackstone (Stamford) had a difficult year although an important order had been received for 4 engines for British Rail's High Speed Trains but Mirrlees Blackstone (Stockport) was more successful, supplying diesel engines in the range 1500 to 13000 bhp, especially for Hawker Siddeley Power Engineering's power station contracts[8]