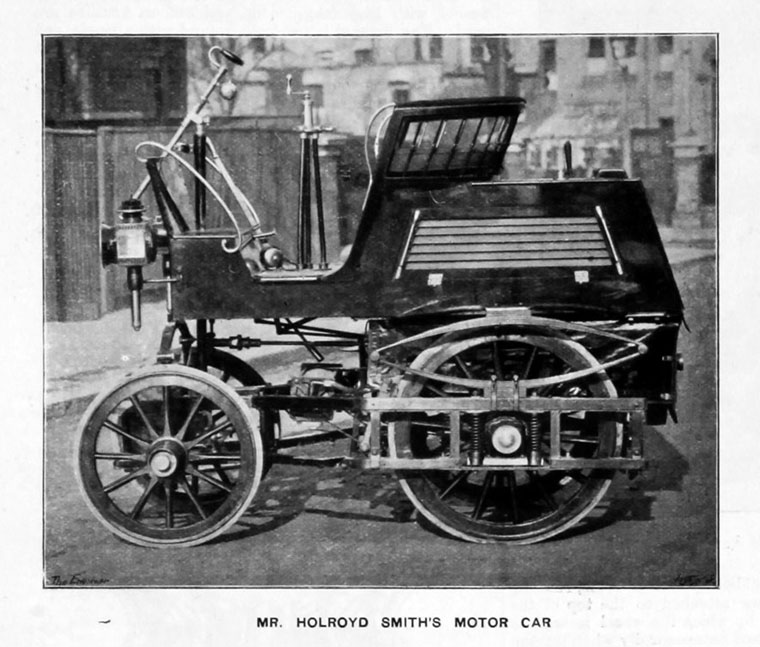 1847 Born in Halifax, son of Matthew Smith and his wife Mary Sutcliffe.

1859 His uncle formed a wire manufacturing firm, Frederick Smith and Co, in Halifax.

1864 His father returned to Halifax (having been managing a wire mill in Birmingham) to go into partnership with his younger brother.

Worked with the family firm in Halifax

1870 Became an associate of the Inst of Mechanical Engineer

Embarked on a career as a consultant engineer, designing mills, testing engines, and investigating the causes of industrial accidents.

Became a partner in Smith, Baker and Co., of Cornbrook, Manchester. Made some of the earliest telephones, telephone exchanges, and phonographs in Britain.

1874 he married Anne Williams. The couple lived in Wales.

By 1882 Michael had recognized the potential advantages of electric traction over cable traction for trams.

1883 he built three experimental narrow-gauge electric tramways, one in his father's warehouse, the other two in the grounds of the home of a friend, the carpet manufacturer Louis John Crossley, who had installed a private electrical laboratory in his home in Halifax.

After this, Smith arranged a demonstration of a standard-gauge conduit tramway line at his Manchester works and then at the Winter Gardens, Blackpool.

1885 This led to forming the Blackpool Electric Tramway Co and the commissioning of a 2 mile service along the promenade from Claremont Park to South Shore for Blackpool Corporation. This was the first electric tramway for public use in Britain, powered by a conduit in the track. Six of the ten directors of the tramway company were from Halifax, including the chairman, Richard Horsfall; the tramway was constructed by Halifax engineers.

c.1888-1890 Responsible for the electrification of the City and South London Railway.

By 1890 also had offices in Westminster

MICHAEL HOLROYD SMITH was the oldest surviving member of the Institution, having been on the roll since 1870, and had personally known Thomas A. Edison, Graham Bell, and Sir Hiram Maxim. His engineering career was devoted mainly to the development of electric traction.

Mr. Smith was born at Halifax in 1847 and was apprenticed with Messrs. Francis Berry and Company, machine-tool makers, of Sowerby Bridge.

He later joined his father's firm, Messrs. Frederick Smith and Company, wire manufacturers of Halifax, who were engaged upon the development of the telephone system.

About this period he became associated with Mr. Louis John Crossley in whose grounds at Halifax he carried out experiments on electric traction. These proved so successful that his system was adopted in 1885 for the Blackpool Tramways, the first in England to be operated electrically.

His advice was sought in many countries and he travelled extensively, some of his inventions being adopted in America and on the Continent. In the early "Nineties" he came to London and became associated with Messrs. Easton and Anderson.

In 1895 Mr. Smith took an interest in motor-cars and was one of the earliest exhibitors of such vehicles. He contributed a paper before the Institution in 1901 on "Some Work in the Development of the Motor-Car." He was also interested in petrol and steam omnibuses, and the problems of aviation, and shortly before the War constructed a helicopter, which, however, did not prove successful. In the early days of his career he commenced classes in the Mechanics Hall, Halifax, for technical training, which at that time were rare.

Mr. Smith was also a Member of the Institution of Electrical Engineers.

"Tme Late Mr. M. Holboyd Smith.— Mechanical and electrical engineers of the older generation will learn with regret of the death of Mr. Michael Holroyd Smith, which occurred on July 6, at Maeran Hall, Llanrwst, at the advanced age of 85. Mr. Smith was born at Halifax on December 22, 1847, and, after attending King Edward’s School, Birmingham, served his apprenticeship with Messrs. Francis Berry and Sons, machine-tool makers, Sowerby Bridge. Subsequently he was in charge of the machinery in the works of his father’s firm, Messrs. Frederick Smith and Company, wire manufacturers, Halifax, and later became a partner in a firm which had a great deal to do with the development of the telephone system of this country in its early days. He next turned his attention to electric traction, and was responsible for the design and construction of the first tramway operated on the conduit system. This was installed at Blackpool, but he soon recognised that its cost would be prohibitive in many cases. He therefore devised a system of overhead conductors for supplying the current, and laid down, a short length of line at Morecambe before this sytem had been used elsewhere, even in the United States. He was also responsible for the preparation of the plans and estimates which led to the adoption of electric traction on the City and South London Railway. He was a prolific inventor of electric-traction devices, one of the most interesting of which was a system of driving each wheel separately from the armature of a double-armature motor, and thus facilitating the passage of sharp curves. Mr. Smith, who had retired from active life for some years, had been a member of both the Institutions of Mechanical and of Electrical Engineers."