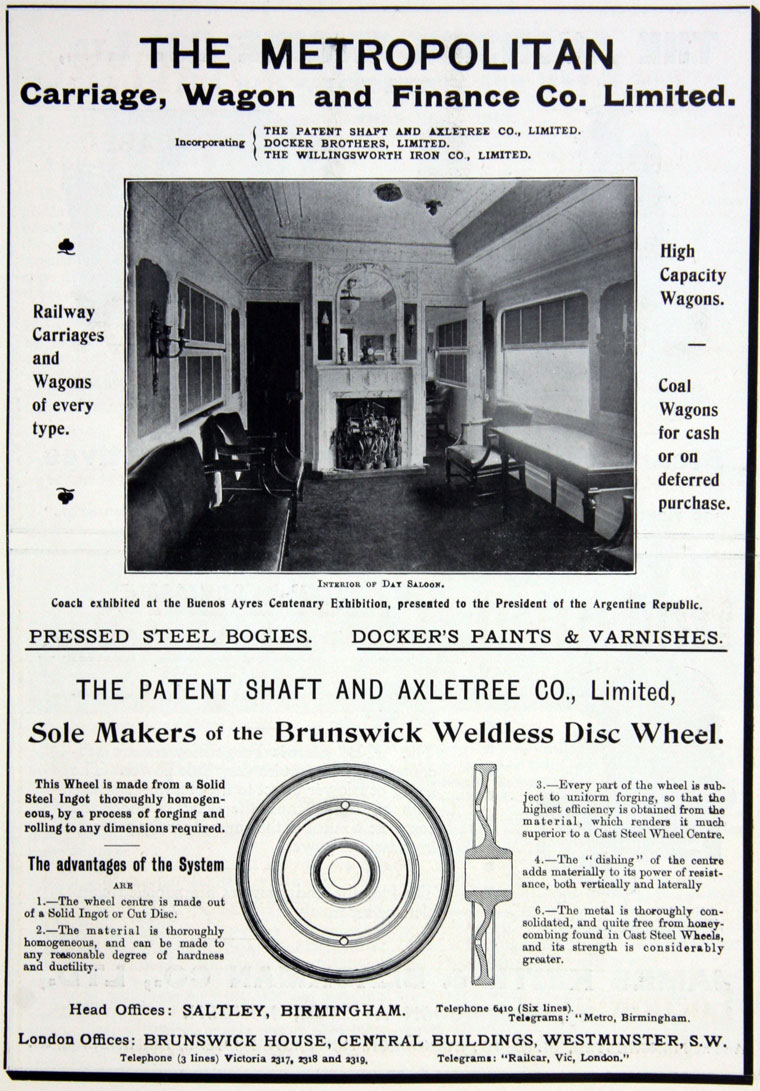 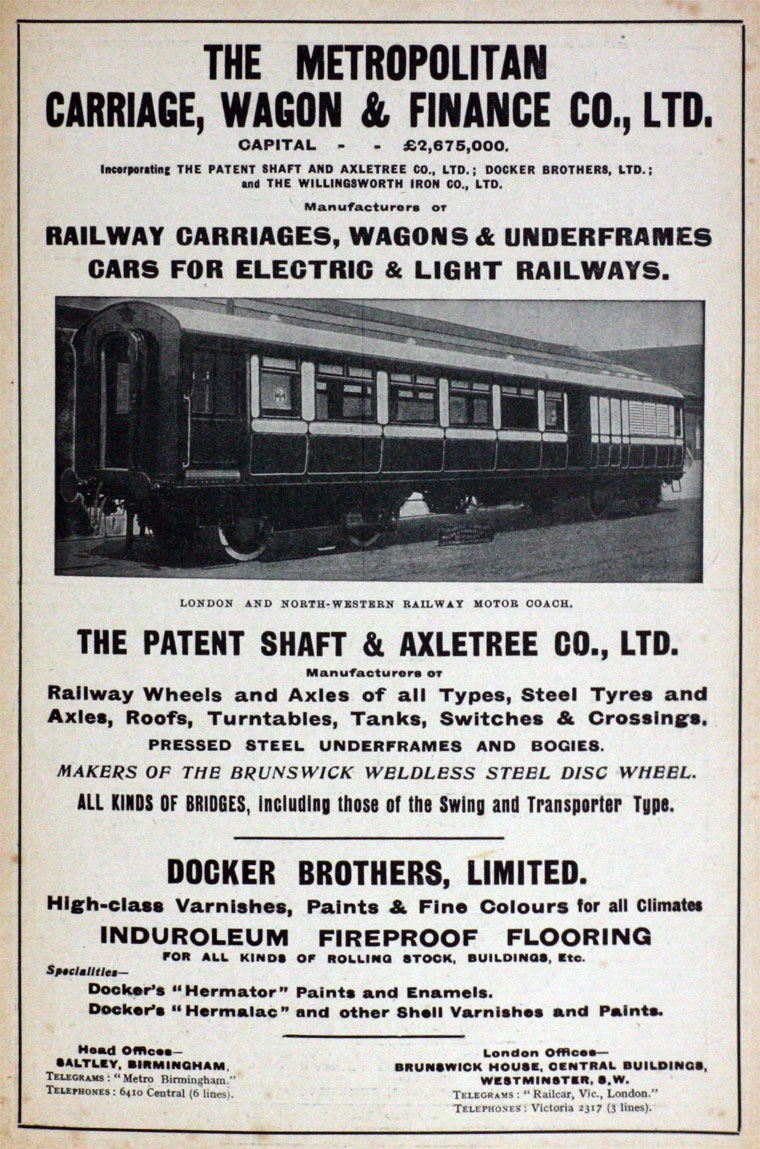 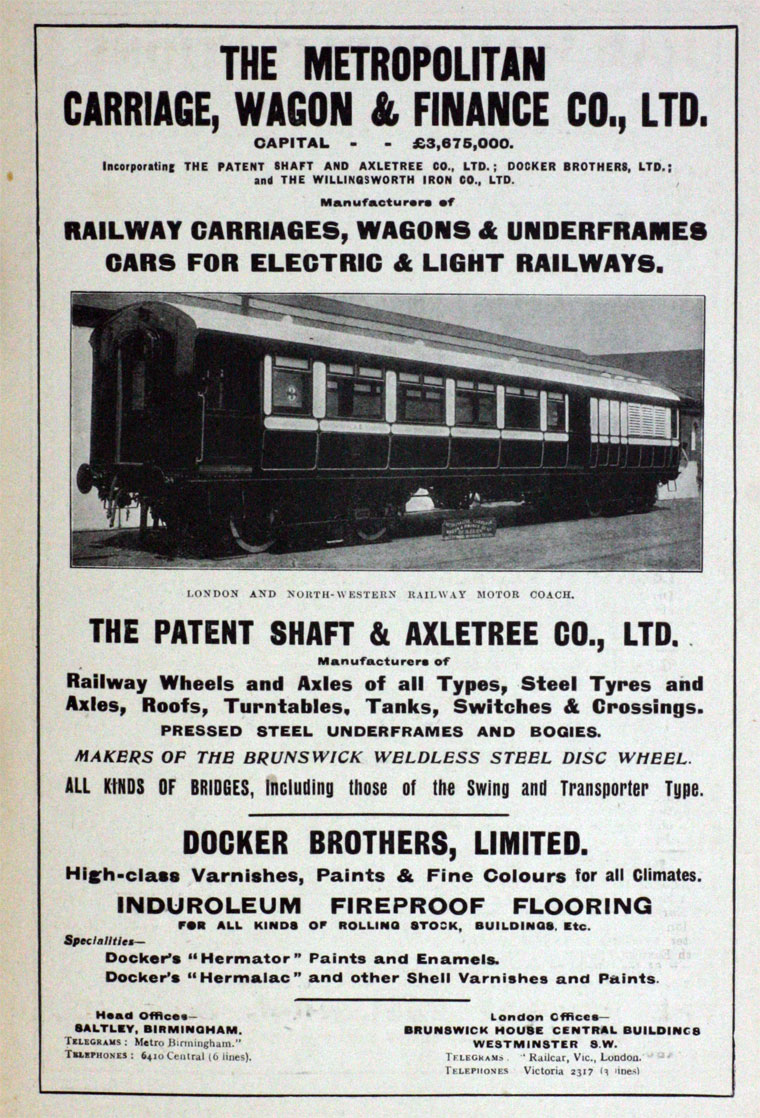 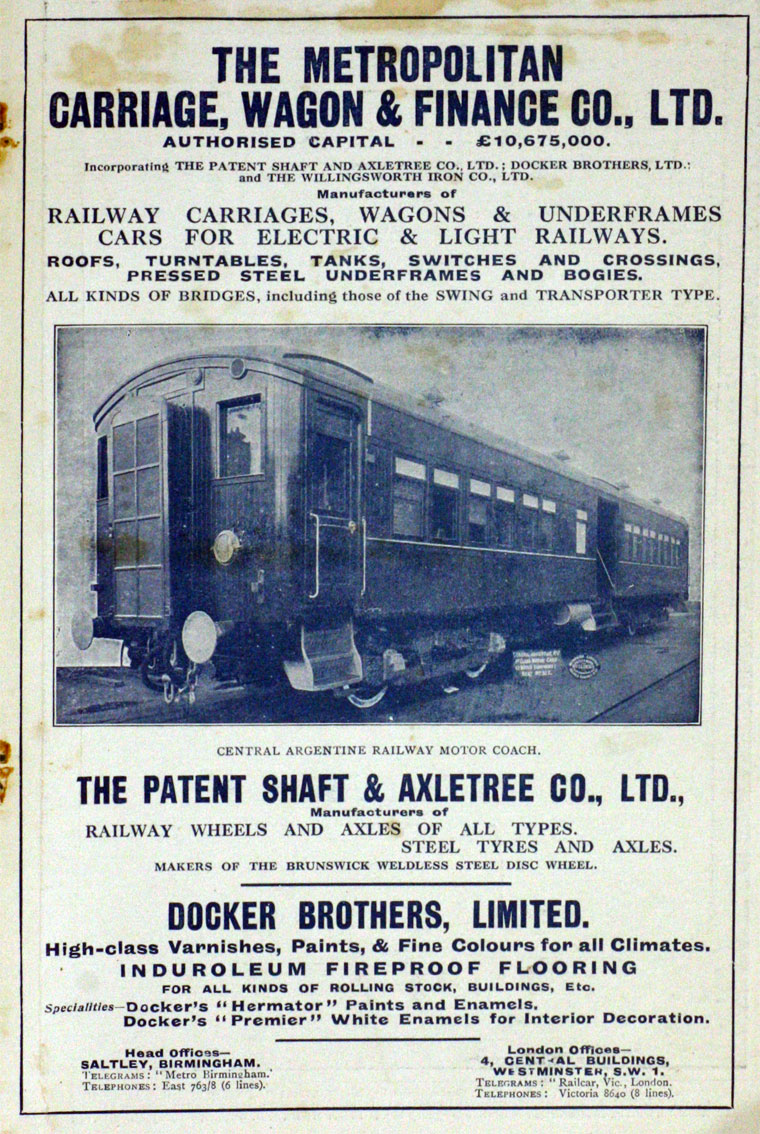 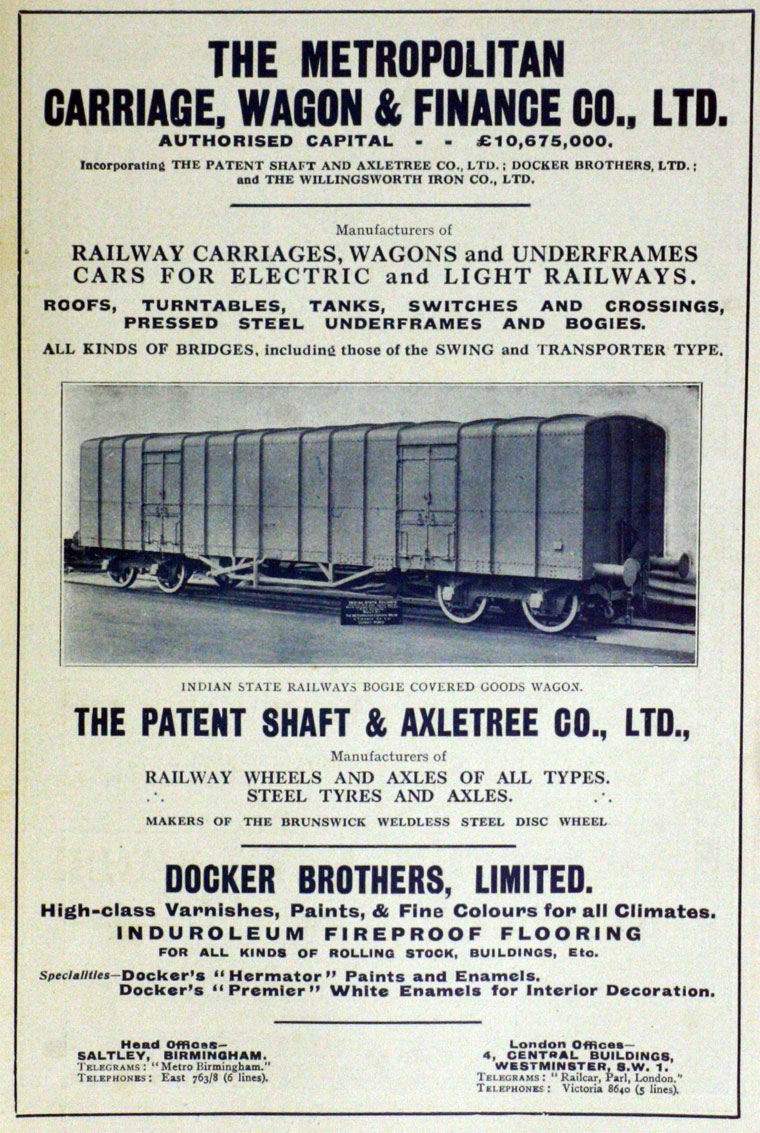 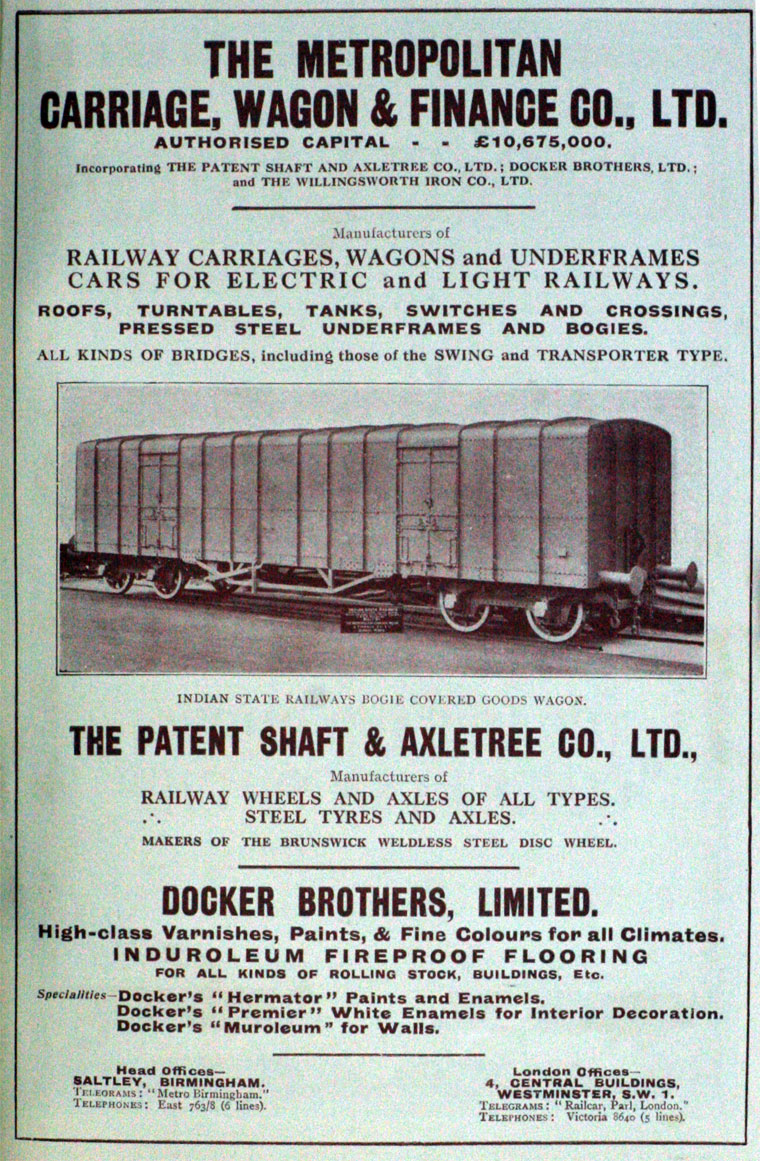 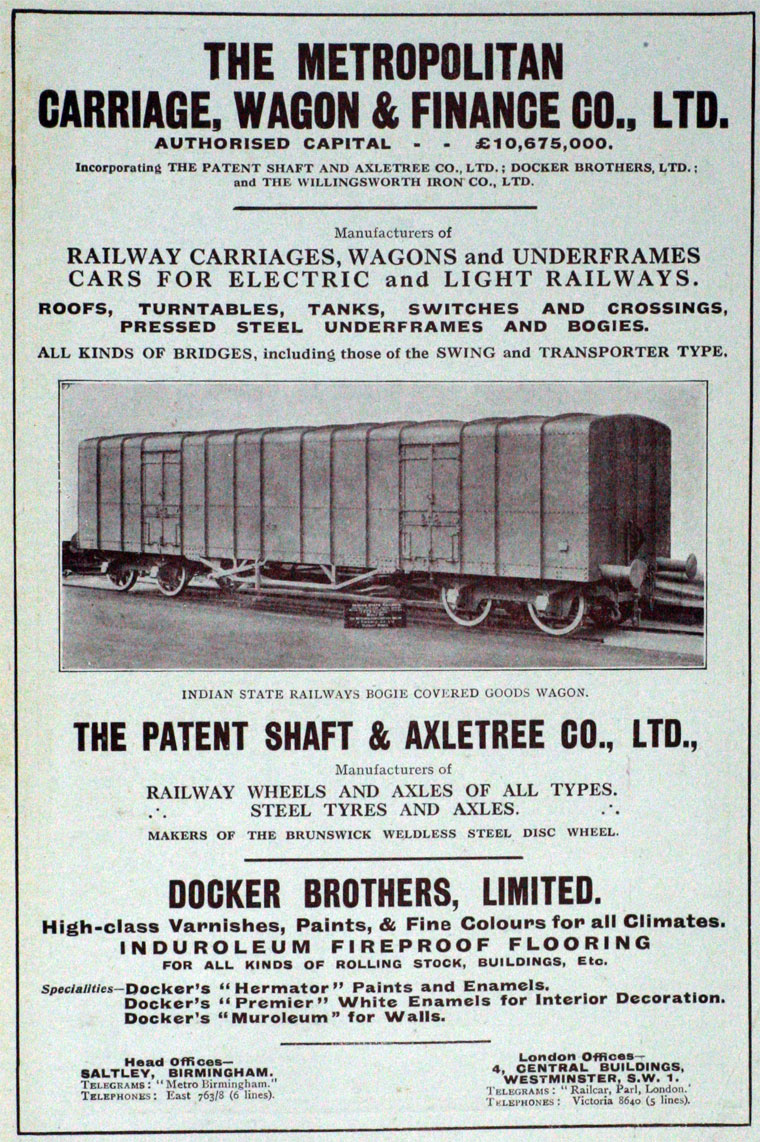 1913 Metropolitan was the dominant manufacturer in the railway carriage and wagon industry, there being 14 other recognised competitors[2]. Some years previously Metropolitan had been the pioneer in developing all-steel coaches[3].

WWI The Metropolitan Carriage, Wagon and Finance Co made aeroplanes[5] as well as rolling stock for military use[6].

The company was the dominant producer of British tanks in WW1, the main works being at Saltley and Oldbury [7]

1916 By this time British Westinghouse had recognised that the American ownership of its operations during World War One was a hindrance - the solution would be to form a British holding company to buy the American shares. In the absence of support from the financial houses in the City, Metropolitan's chairman, F. Dudley Docker, developed a solution involving Metropolitan in collaboration with Vickers buying out the American shareholders.

1918 The British Westinghouse Company was now British in fact as well as name. The authorized capital of £1,395,000 was increased by £5,000,000. The Managing Director, Lange, and Sales Director, Blunt, neither of whom were British, resigned from the Board[12].

1918 Metropolitan acquired large interests in the South Metropolitan Electric Light and Power Co. and the West Kent Power Co. which would enable it to supply a complete service of electrification for railways, not just carriages. In conjunction with GEC, Metropolitan had also acquired the British rights to the special machines for drawing glass envelopes for light bulbs; it had also entered into partnership with Birmingham Small Arms to manufacture certain munitions and were in negotiation to purchase a large manufacturing enterprise[13], which was in fact Taylor Brothers and Co, steel-makers of Leeds[14].

1919 Vickers take control. Docker had recognised the importance of electricity for the future development of many industries[15]. He saw the opportunity to form a large electrical combine, like those existing in Germany. Vickers wished to be able to supplement their production of steel, ships, trains, and machinery with that of the associated electrical equipment. As a result of their joint work to acquire British Westinghouse, Vickers then made a cash or shares offer for the whole of Metropolitan, and also for Taylor Brothers and Co. Vickers and Metropolitan would continue as separate entities, operated under a unified policy. Several of Metropolitan's directors, including Docker, would join Vickers' board[16].

1919 Docker, as chairman of Metropolitan Carriage, Wagon and Finance Company Ltd, wrote to the government offering to supply 500 railway wagons per week[20].

c.1921 Docker retired from chairmanship. In 1921 his successor Sir Ernest Hiley then resigned from the position with no explanation at the time of writing. The reason was associated with the decline in the quotation for Vickers ordinary shares. Sir Douglas Vickers was thereafter appointed the new chairman.[21]

1926 Order placed by Great Western Railway for fifty fish vans for use on passenger services.

1927 Retained by Vickers after the formation of Vickers-Armstrongs.

1929 The amalgamated entity was owned by Vickers and Cammell, Laird and Co; it became known as Metro Cammell.