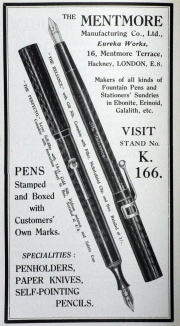 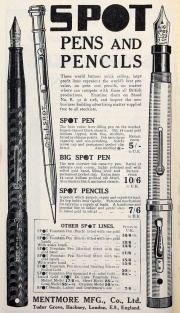 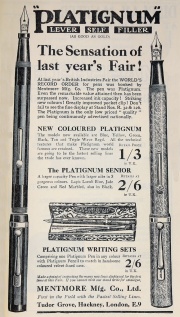 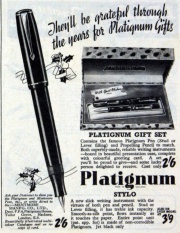 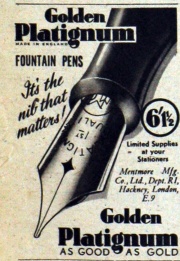 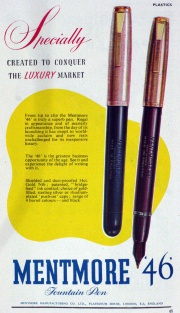 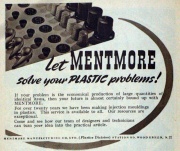 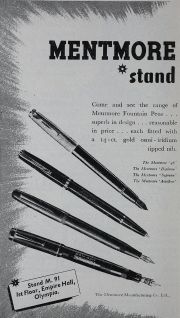 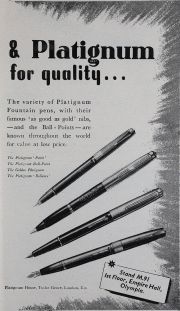 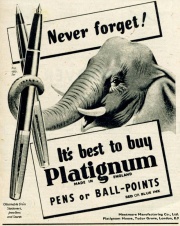 Mentmore Manufacturing, inventor of the cartridge pen, the retractable ballpoint pen, and the felt tip,

1919 Platignum Pen Co started life as the Mentmore Manufacturing Company, named after its first premises in Mentmore Terrace, London. The company's first product was a self-filling fountain pen with a gold plated nib which sold for 6d (2½p).

1925 The first replacement nib unit was developed - a revolution in pen design. The Platignum name was also introduced, and the slogan 'As good as gold' to reflect the use of stainless steel for the first time. Mentmore were anxious to register the name Platinum, but were unable to do so because it could have contravened the laws of product description - as they existed at that time. To overcome the problem, a company was registered in the name of the "Platignum Pen Company", and products carrying the brand name Platignum were introduced. Platignum were the first company to use injection moulding in the production of their pens.

1939-45 The outbreak of the Second World War meant that Platignum was only allowed to produce 25% of its pre-war pen output, with the major production concentrated on munitions, aircraft parts and cap badges. The War Office entrusted the company with the making of special 'spy' pens which could contain maps and compasses. A deadlier model was also produced for use by secret agents - it contained a poisoned dart which could kill at 20 ft!

1950 The company marketed their own version of the ballpoint pen for 5/- (25p), and soon after invented the retractable ballpen. Platignum, also around this time, invented ink cartridges.

1957 A move to Stevenage meant more space and allowed the company to diversify into plastic stationery accessories and fibre tipped pens.

1984 Platignum relocated to its present site in Royston[8].

1984-93 Expanded its interests again by acquiring an array of companies including Ivy Stationery and Gluetek (now Platignum's Paints and Adhesives division).

1989 Acquired furniture companies Homestead, Stroud House and Younger from Queensway, giving the owner of Queensway a substantial interest in the company[10]