1874 bridge on left, 1879 on right. Note the lack of bottom flange plates on older girders. 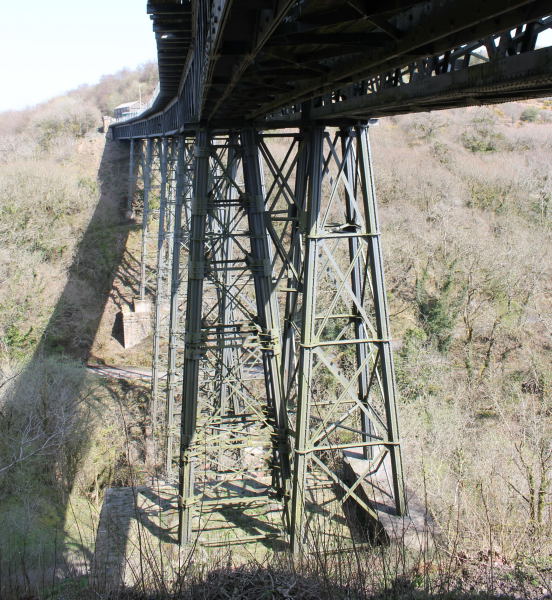 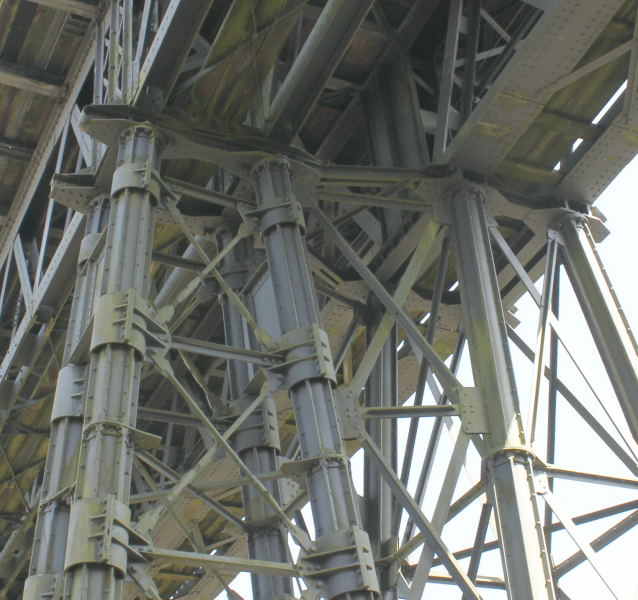 Note interconnection between old and later columns, and 1959 collars and ties on old columns

This and the next photo hint at the amount of skilled blacksmith work required on the original bridge. The shaping of the angle iron to fit between the flanges at the bottom of the columns would have been challenging

Each of the original diagonal struts would have required the smith to upset the ends and then form the octagonal and square sections and the rounded lug, to the precise required length and angles. 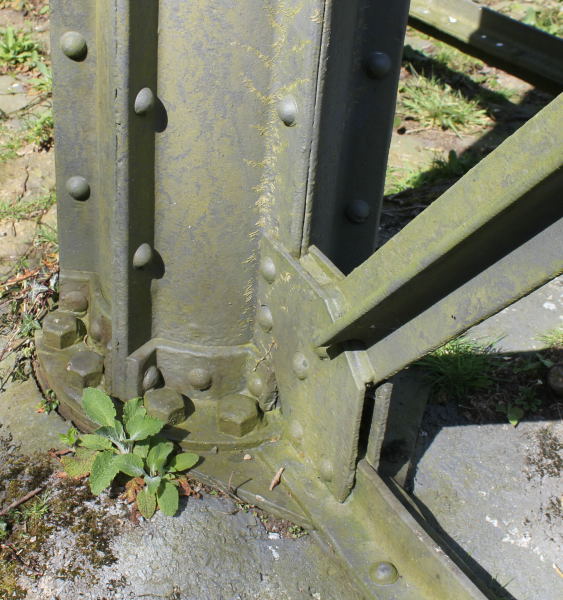 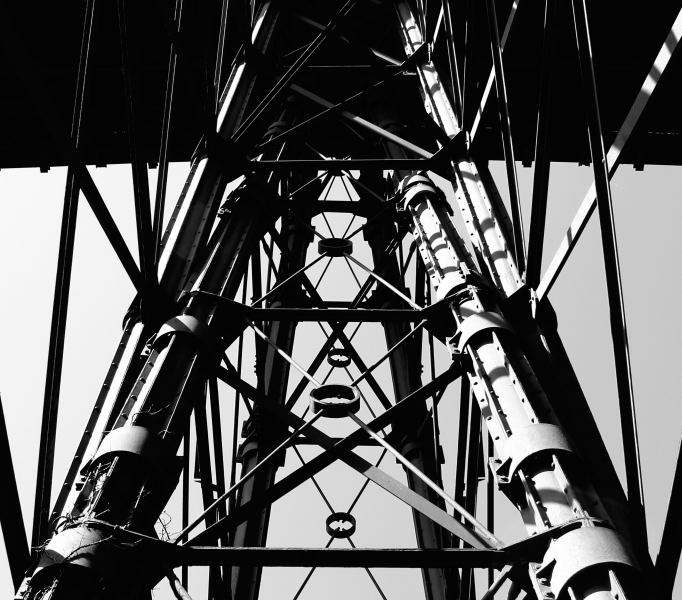 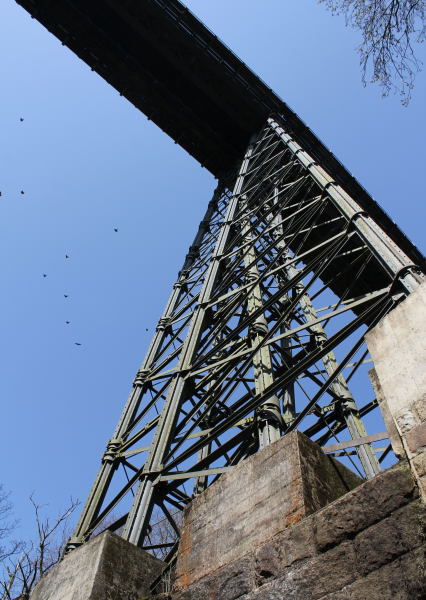 A view from the riverbank. The feet of the columns, old and new, were latterly encased in concrete

Cast iron columns support the extreme ends of the girders

On the later bridge, the column plates show the rolling mill’s mark - J & R MOOR. This is doubtless Johnson and Reay of Moor Ironworks, Stockton-on-Tees.

Near Okehampton in Devon. Now used as a cycleway.

One of only two surviving examples in Britain of a large wrought iron truss girder railway viaduct supported on wrought iron piers. The other is Bennerley Viaduct.

In fact there are two viaducts comprising the structure at Meldon, their decks being adjacent, and their legs overlapping in the middle. The two are tied together at various positions. The first bridge was completed in 1874, the second in 1879.

'THE LYDFORD EXTENSION OF THE DEVON AND CORNWALL RAILWAY.
[From the ' Exeter Gazette ' of September 14th.]
The completion of the Okehampton and Lydford section of the Devon and Cornwall Railway is fraught with important results, not only to the traders of Plymouth and Devonport, but the whole travelling public, whose business or pleasure carries them west of Exeter.


The construction the extension from Okehampton to Lydford was commenced three years ago by Mr. Relf of the most energetic of contractors, and it was expected that it would have been completed long ere this but the scarcity of labour and the difficulty of obtaining the iron for the Meldon Viaduct have delayed operations as a result common to all railway enterprises which have been in progress during the last few years. The length of the extension is within a fraction of ten miles, and the works are extremely heavy. The works are so near completion that they were inspected on Friday last by Col. Hutchinson, the Government Inspector, who was over the line with two of the heaviest engines of the London and South Western Railway Company, weighing, with the attendant carriages, nearly 120 tons, and driven by the district locomotive superintendent, Mr. T. Higgs. The inspector was accompanied by Mr. Archibald Scott, the Secretary of ....... Skirting the moor, the line continues to rise over embankments, and through rock-excavations, till, with scarcely a warning, we come in view of what may be termed the special feature of the railway — the lofty iron viaduct by which the rails are carried across the valley of the West Okement. This structure, which has been christened the Meldon Viaduct, is of a novel design, and has excited no small amount of comment among the natives. It consists of six openings, or spans, of 90 feet each. The roadway is carried on wrought iron girders nine feet deep, constructed on the Warren principle. At each end of the viaduct the girders are supported on cast-iron cylinders filled with concrete, and surrounded by the embankment, so that their duty is merely to withstand a downward pressure, all lateral movement being controlled by the earth or rather rockwork in which they are embedded. The five intermediate piers are composed of wrought-iron columns, securely braced and rivetted together, resting on bases of solid granite, to which they are firmly fastened by massive wrought-iron bolts. Each pier is built up with four columns. The extreme height from the bed of the river to the rails, is 152 feet; and [as] both the girders and the piers are of open latticework, painted white, the viaduct to the inexperienced eye looks somewhat slender. The appearance of the towering structure, amid the majestic masses of granite hills is extremely light and graceful. It is only to the eye that any want of stability seems to present itself, for repeated tests have proved the great strength of the erection ; and Colonel Hutchinson, on Friday, after trying its vibration and levels while the two engines, some 120 tons in weight, passed and repassed over it again and again, expressed himself well satisfied with the result of the examination. The rule laid down by the Board of Trade is that all wrought-iron bridges shall be of a strength sufficient to sustain four times the greatest load which can by any possibility be brought upon them. The Meldon Viaduct is no exception to this law of the Medes and Persians, and nervous old ladies of both sexes may lay aside their fears when they meditate a trip further west over the Devon and Cornwall line. The iron-work for the viaduct was supplied the well-known firm Lloyds, Foster, and Company, of the Old Park Works, Wednesbury. It weighs 420 tons, and the accuracy with which the various parts are fitted together contributes materially to the solidity of the structure a whole. From this elevated position the outlook is grand—grander perhaps when, on Friday, the rain is pouring pitilessly down, and the highest tors are hid in the clouds, than when the sun is gliding the granite boulders and heath-covered slopes. Looking towards the tors one sees brawling streams foaming down either side of the hill that closes the opening spanned by the viaduct, joining at the foot to turn the huge wheel of a lime-quarry, and rushing over the boulders beneath the bridge as the West Okement; while on the other side the fir-trees that fringe the banks give to the little vale the appearance of a Highland glen. Leaving Meldon. "excelsior" is still the word, and through a cutting of very hard rock, and over deep bank, we speed onward and upwards until the summit cutting is reached, and the back-bone of Devon is cracked. ........


'The bridges and viaducts, with the exception of the Meldon Viaduct, are nearly all of granite, of bold design, and exceedingly well-built—in fact the railway has been constructed in the most effective and durable fashion in all respects. The engineers are Messrs. Galbraith and Church. Mr. Relf, the contractor, has had a hard nut to crack, but has carried out the works with his usual energy. novel feature in the formation of the line is the circumstance that, both with regard to works and land, the cost has been below the Parliamentary estimate. To Mr. Henry Drew, surveyor, of Exeter, the task of purchasing the land was entrusted. Many of the landowners have taken payment in shares. To the enterprise of the Imperial Credit Company of London we are indebted for the construction of this very important link in the chain of railway communication, they having provided nearly all the funds required to complete the undertaking. We are glad to learn that they have been no losers by the transaction, as the railway, together with the works and stations now in course of construction at Plymouth, has been purchased by, and will pass into the hands of, the London and South Western Railway Company, when opened for traffic. After the inspection on Friday afternoon, most of those who had assisted it partook of a champagne luncheon at the White Hart Hotel, Okehampton, Mr. Galbraith presiding, and Mr. Relf occupying the vicechair. Colonel Hutchinson was not able to finish his inspection, in consequence of the incessant downpour of rain, but it is understood that the line will opened for public traffic on the 1st of October.'

187: '..... Okehampton will, in fact, be the junction station, and the line from thence to the Meldon junction is being doubled with all possible speed. The difficult part of this work has been the iron viaduct spanning the Meldon Valley. The foundations are at present being laid for a duplicate of this viaduct. ....'[2]

1879: 'OKEHAMPTON. The Railway.—For nearly two years the London and South Western Railway Company has been engaged in laying down an extra set of rails between Okehampton and Lydford, and the work is so now near completion that it is thought the new line will opened for traffic at the commencement of the new year. Until recently the Company have used ordinary iron rails, but West Cumberland steel rails, are now being substituted. The three large viaducts on this section of the line have had to be doubled in width as were the cuttings, embankments, and bridges, and provision has also been made at the different stations for any alteration in the mode of the transit of traffic which it might, at a later period, be necessary to make. The Meldon viaduct will, it is thought, completed the course of a few days. A new viaduct has really been constructed entirely of iron, and the two have been bound together with iron stanchions. It was tested on Thursday by means of 54 tons weight being brought to bear on each of the twelve girders. Meldon viaduct is the highest bridge of the three —being about 154 feet, while the Lake and the Lyd are about 60 feet high. The machinery which has been used this undertaking has greatly facilitated the operations. Everything has been raised with such care that since the commencement of the work there has only been one accident, which happened on Wednesday last to a man named Mott, who, while standing near the stationary engine, got entangled in the belt, and would have been killed had not a man standing near cut the band. escaped with a compound fracture of the arm. The opening-up of the rocky cuttings has been attended with considerable danger. Blocks weighing from six to seven tons have sometimes been blown up by gunpowder, and a watchman has been on duty to warn approaching trains should any the stone fall on the permanent way. Three workmen have been killed since the work commenced— one by a passing locomotive, and two others by a fall of earth.'[3]