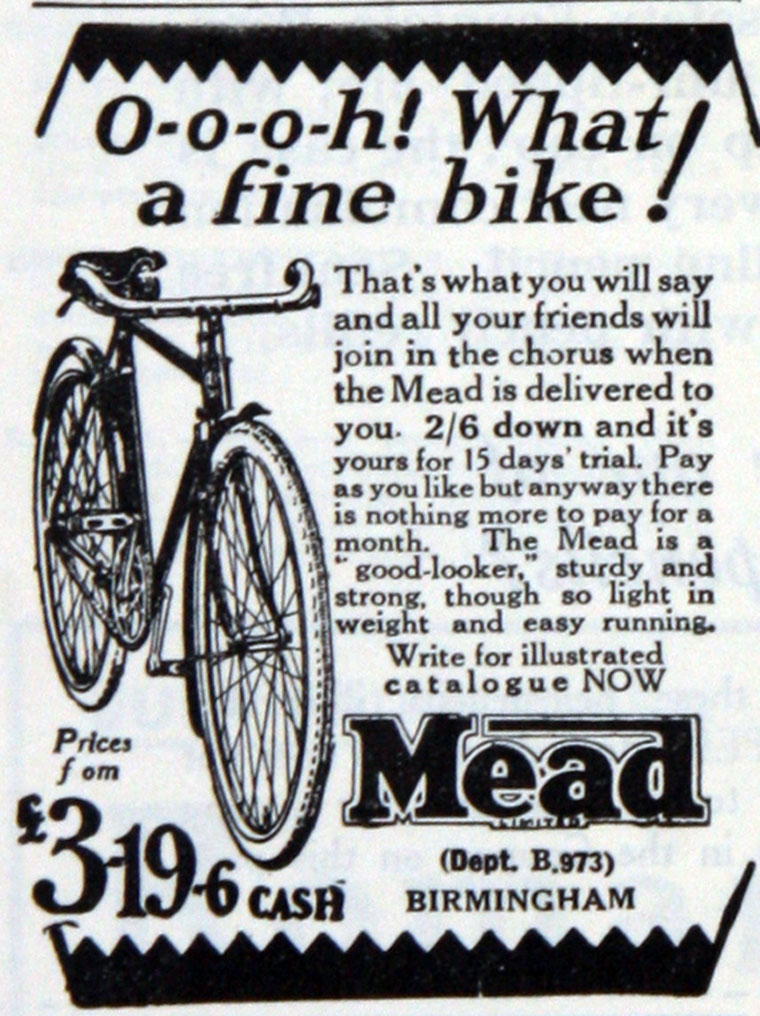 Mead Cycles of Paradise Street, Liverpool and of Birmingham.

1905 Advert. '... the Mead Cycle Company, of Coventry and Birmingham, and whose general offices are at 35 to 39 Wapping, Liverpool. The Mead Company do a very large business indeed, and their catalogue includes everything that a cyclist could possibly need. The Company especially commend their 1905 model 'Coventry Flyer' at 15 guineas...'[3]

1911-1913 The motorcycles were produced in very small numbers and did not appear at any of the early shows, or on any lists. They were fitted with a 3.5hp Precision engine.

1911-15 The machines were built for Mead by Calthorpe.

1914 A larger motorcycle range appeared, all fitted with Precision engines. These were 2.5hp, 3.75hp and 4.25hp singles, plus 6hp and 8hp V-twins, and all had a variety of transmission options ranging from direct-belt drive to geabox and chain-cum-belt. A lightweight was later added, using a 2hp, 170cc Precision engine with in-built two-speed gear, belt drive and Druid forks.

1915 Production continued into that year and then stopped.

Post-War, they also had an address in Birmingham as well as Liverpool.

1922-1924 The name returned as an assembler of machines that were typical of the period. They used 1.75hp, 2.75hp and 3.75hp engines from Precision and Wall, and the usual Villiers two-stroke single.

William J. Pickering after upwards of a quarter of a century's connection with the Mead Cycle Company of Sparkbrook, Birmingham, has decided to give up active participation in the conduct of the business; but his services will be retained in an advisory capacity. (extract taken from Bicycling News and Motor Review. Nov 2 1927)