Grace's Guide is the leading source of historical information on industry and manufacturing in Britain. This web publication contains 142,367 pages of information and 227,857 images on early companies, their products and the people who designed and built them. 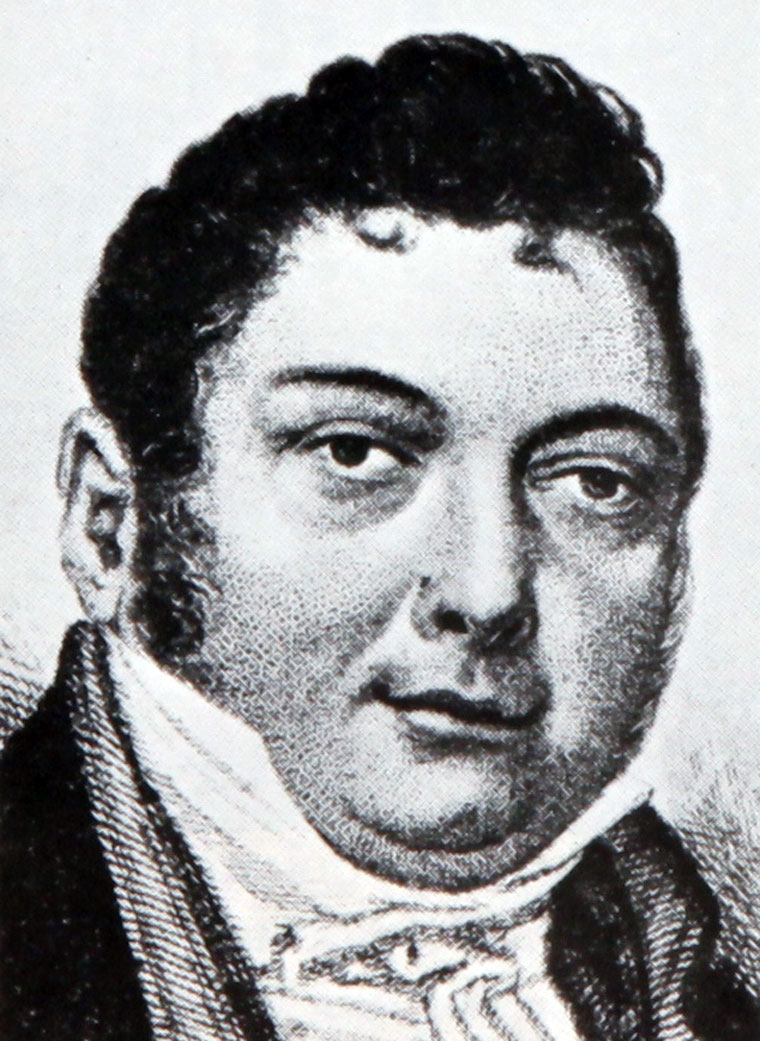 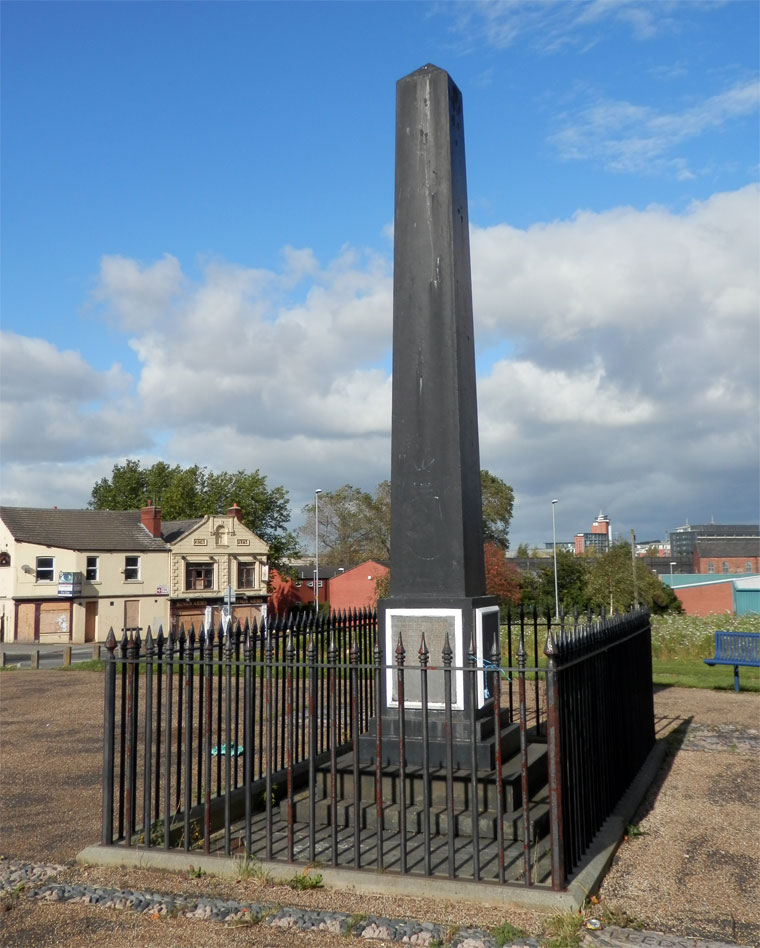 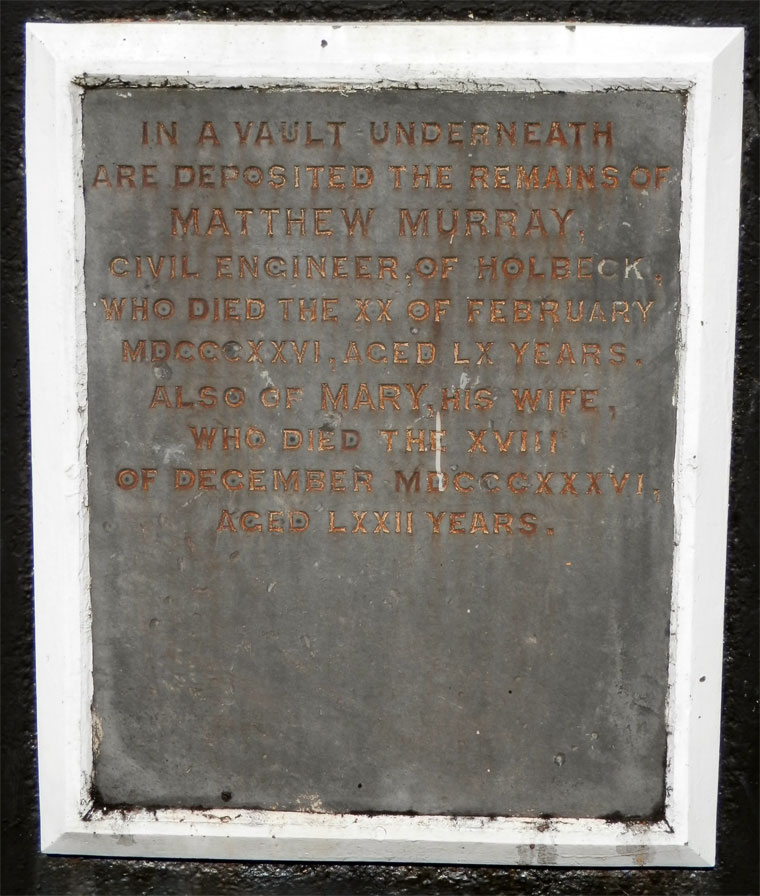 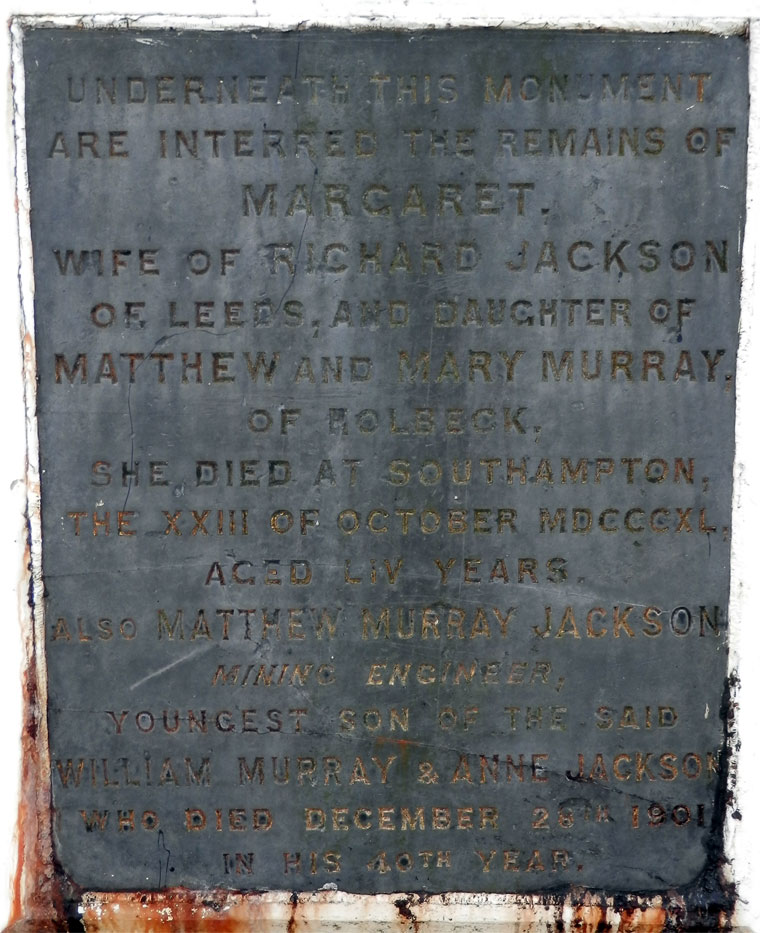 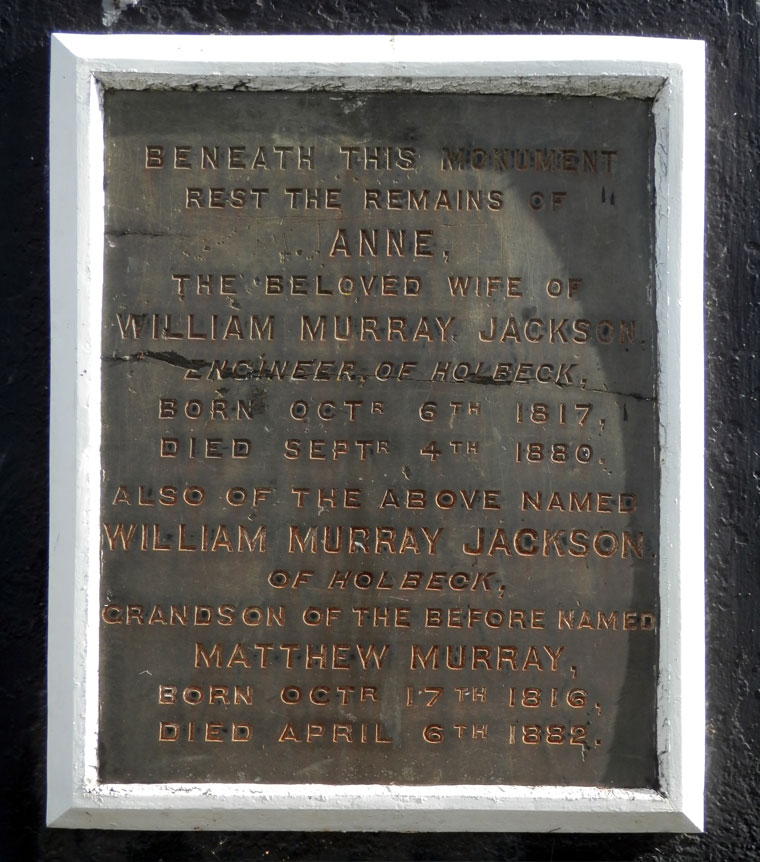 Matthew Murray (1765-1826) of Fenton, Murray and Wood was a steam engine and machine tool manufacturer, who designed and built the first commercially viable steam locomotive, the Salamanca.

1765 Matthew Murray was born in Newcastle-upon-Tyne. There is a claim that he was born at Stockton-on-Tees in 1763.

1779 He was apprenticed to be a blacksmith

1786 Moved to Stockton where he undertook training as a whitesmith

He worked as a journeyman mechanic at a flax mill in Darlington, where the mechanical spinning of flax was invented.

1790 Murray worked closely with John Marshall (as Marshall's lead mechanic) in a protracted effort to develop machinery to successfully draw and spin line flax into yarn. Considerable advances were made, and Marshall funded a patent taken out in Murray's name, Patent No.1752 of 1st June 1790. A breakthrough had been obtained by introducing leather bands in conjunction with the drawing rollers. Marshall summarised the episode thus: '...worked some machinery on the patent plan of Kendrew and Co. This did not answer, and we tried experiments, and took out a patent for a plan of Matthew Murray's out principal mechanic.' Following this, Marshall determined to expand and moved his mill from Adel to Holbeck, and Marshall and Murray began to put great effort into mechanizing the drawing and spinning of tow, culminating in Murray's second patent.[1]

1794 April. Last mention of Murray in the Marshall work books so presumably left his employ around this time

1795 Partnership established as a steam engine manufactory at Holbeck by Matthew Murray and David Wood. They received good support from Marshall and Benyon, implying that Murray's departure had been amicable, and indeed Murray continued to be involved in Marshall's textile machinery experiments[2]

1800 Murray called on Boulton and Watt but was refused a reciprocal tour of the steam engine-making part of the works.

Murray invented, or improved, the D-slide valve, made the air-pump more efficient, and simplified the design of the engine. To machine the rubbing surfaces the D-slide valve he invented his planing machine, and was the first to adopt the placing the piston in a horizontal position in the steam engine. As well as steam engines the firm made mill work and machine tools, and in 1804 began foreign export with an order for Sweden.

1809 Receives a Gold Medal from the Society of Arts for his machine for heckling flax. May have met Richard Trevithick in London at this time as they afterwards did business together

By 1811 Murray was working with Trevithick on a high-pressure engine subsequently fitted to a boat and successfully used on passenger service, an early application of steam to passenger traffic. He continued to design and construct beam engines.

1812 John Blenkinsop, colliery viewer at Middleton colliery, Leeds, relaid the track leading to the colliery with a toothed rail on one side - this was the Middleton Colliery Railway. He approached Matthew Murray of Fenton, Murray and Wood to design a locomotive with a pinion which would mesh with it. Murray's design was based on Trevithick's Catch Me Who Can, adapted to use Blenkinsop's rack and pinion system; the locomotive was named Salamanca; it was the first commercially successful steam locomotive.

The locomotive was the first to use two cylinders, driving the pinions through cranks which were at right angles, so that it would start wherever it came to rest.[3]. Murray's 4 horsepower engines remained in service until the 1830s.

1815/6 Murray also supplied an engine for a steam tug in Mississippi.

In his later years, Murray continued to work on machine tools, textile machinery and dyehouse plant. He developed interests in marsh drainage, and gasworks and waterworks, and worked as consulting engineer to factories, mines, and other industrial installations.

1826 Matthew Murray died 20 February 1826 aged 60 and was buried in St. Matthew's Churchyard, Holbeck. His tomb was surmounted by a cast iron obelisk. His firm survived until 1843. Several prominent engineers were trained there, including Benjamin Hick, and David Joy.

Mechanic, Engineer, and Inventor.
Murray Matthew [!] (1765-1826), engineer and inventor, born in 1765 near Newcastle-on-Tyne, was apprenticed a blacksmith, and on the expiration of his indentures found work, about 1789, at Messrs. Marshall’s, the great flax-spinners, at Holbeck. Leeds. He introduced the use of 'sponge-weights' for damping the front rollers of flax-spinning machines, which ultimately led to the important innovation of wet spinning, flax having previously been spun dry. In 1790 he took out a patent for spinning and drawing frames, and in 1793 another patent for preparing and spinning flax, hemp, tow, wool, and silk, in which a carding engine is described. In the specification of these patents he describes himself as a !whitesmith and mechanic.". He was awarded a gold medal by the Society of Arts in 1809 for machine for heckling flax. He quitted Marshall's service in 1795, and started business at Leeds in partnership with James Fenton and David Wood, who found the necessary capital. The style of the firm was Fenton, Murray, and Wood, and afterwards Fenton, Murray, and Jackson. Their place of business was known as the Round Foundry. In addition to the manufacture of flax machinery, Murray turned his attention to the steam engine, and the firm became a formidable rival to Boulton and Watt, who went to the length of surreptitiously purchasing the adjacent land to prevent the extension of the foundry. Murray was one of the first to study the external form of the steam engine, endeavouring to improve the general design of the machine, as well as secure compactness of arrangement, solidity, and accessibility of parts. Views of his engines may be found in Stuart’s "Anecdotes of Engines," Farey’s "Steam Engine," and Nicholson’s "Journal of Science." He took out patents for improvements in various details of the steam engine in 1799 and 1801-2. Murray is generally credited with the invention of the "shortened slide valve," for controlling the supply of steam to the cylinder, and an approach to that form may seen in his patent of 1802. It is described by Farey as forming part of one of Murray’s engines built in 1810. As a proof of the soundness of Murray’s work, it may mentioned that one of his engines, put up at Water Hall Mills, Leeds, about 1813, was regularly running until 1885. In 1812 Murray was employed by Blenkinsop, of Leeds, to build locomotives to run on a rack-railway from Middleton Collieries to Leeds, a distance of about three miles and a half. The "Salamanca" and the "Prince Regent" were put upon the road in 1812, and the "Lord Wellington" and "Marquis Wellington" in the fallowing year. This was the first instance of the regular employment of locomotives for commercial purposes, and the engines ran for at least twenty years. They were fitted with two double-acting cylinders, no fly-wheel being required. This was an important improvement. Murray was also a builder of boat-engines, and the "Leeds Mercury" June 24th, 1813, states that a steam-boat to ply between Yarmouth and Norwich was then being fitted up in the Canal Basin at Leeds. This boat ran regularly until April, 1817. when the boiler exploded. He is one of the numerous claimants the invention of the planing machine, which seems have been in use in his shop in 1814. Murray died at Holbeck, Leeds, in February, 1826, aged 61, and was buried in Holbeck Churchyard. For his portrait, see Smith’s "Old Yorkshire," vol. 3. See also the "Worthies of Leeds," Smiles’s "Industrial Biog.," and the "Dict. of Nat. Biog." [4]

'Matthew Murray 1765-1826 and the firm of Fenton Murray and Co 1795-1844' was published in a limited edition in 2015. Its 498 pages provide a comprehensive account of Murray's life and of the work of Murray and his company, with numerous supporting references[5]