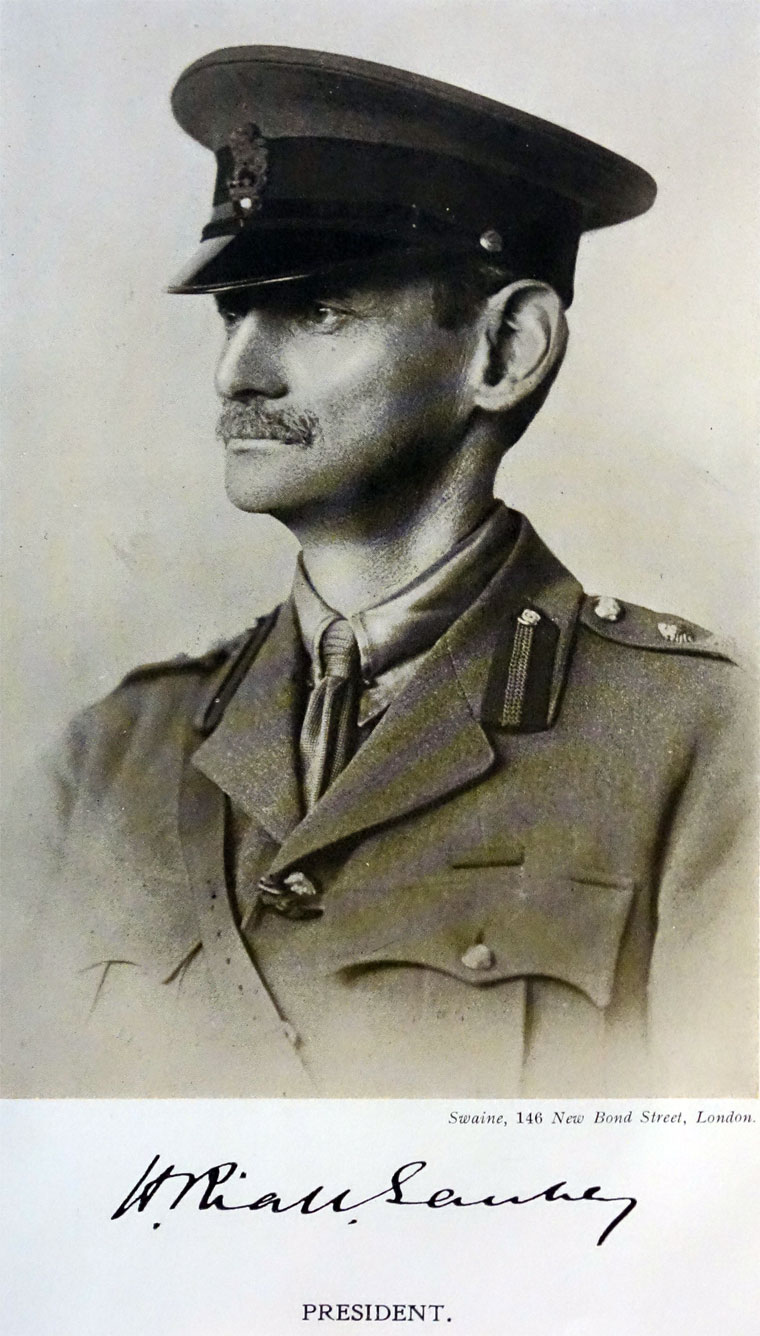 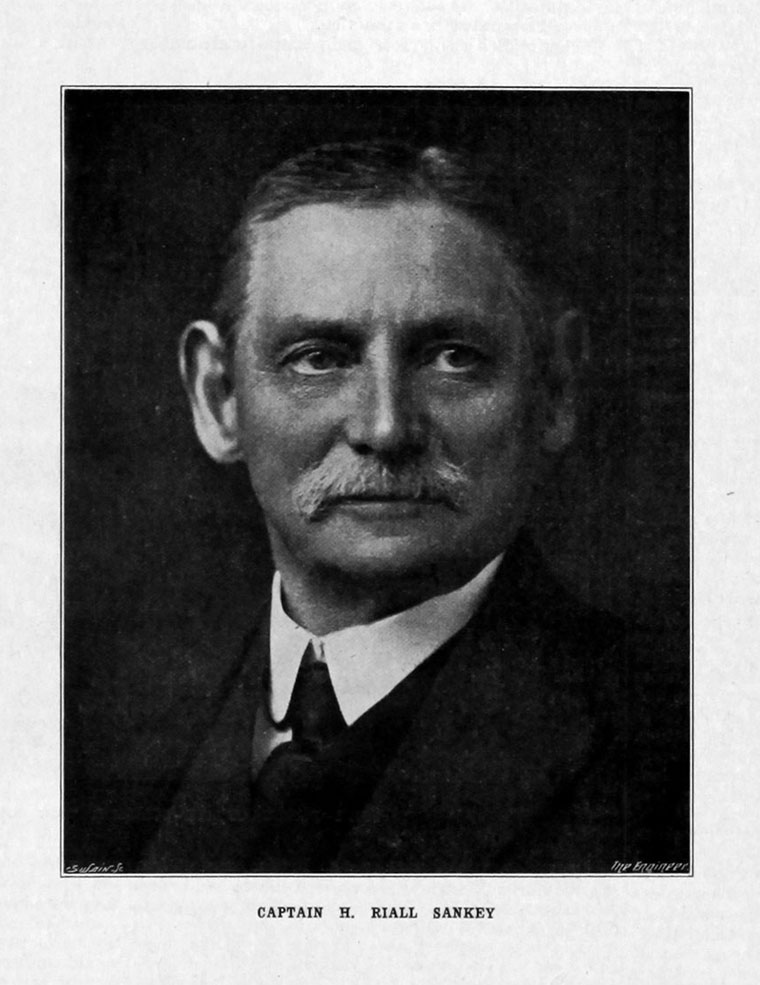 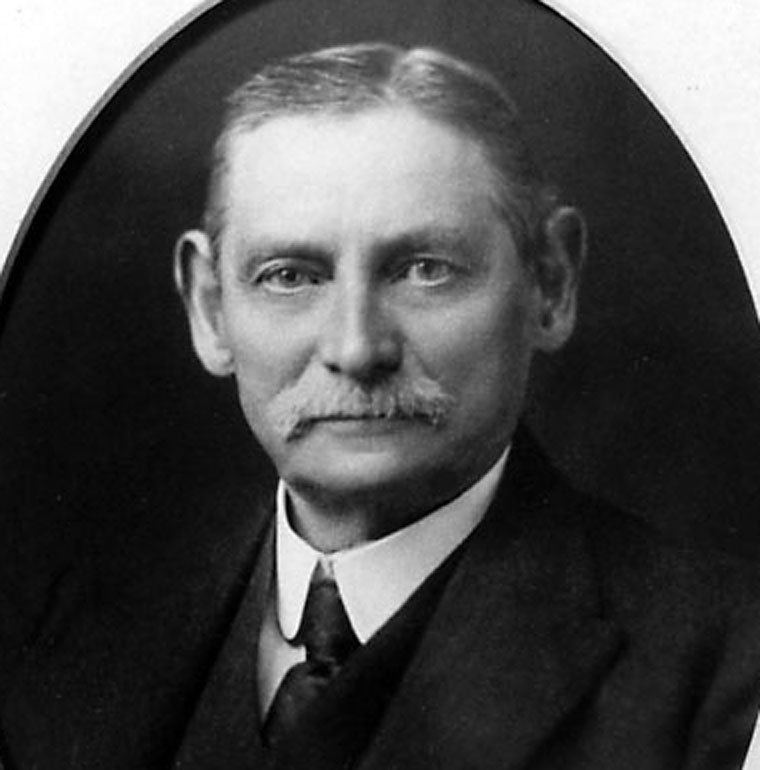 He went to school in Switzerland, then attended Mr. Rippon’s School at Woolwich

1873 he received a commission in the Royal Engineers, and started the required course at the School of Military Engineering, Chatham. As he reached the end of his training, he was one of the Royal Engineer officers selected for employment by the Royal Commission on Railway Accidents in connection with the important series of Continuous Brake Experiments carried out in 1876. Later that year he was engaged in the War Department drawing office on the design of barracks.

1879 he was appointed Instructor in Fortification at the Royal Military College, Kingston, Canada. After three years service there he returned to England to take up a position at the Ordnance Survey Establishment at Southampton.

1882-89 At Ordnance Survey, Southampton, in charge of workshops and electro-typing

1889 he retired from the Service and joined the board of Willans and Robinson, engineers. Was director in charge of Outside department, and then Works director.

1894 Member of I Mech E and Inst Civil Engineers

1904 commenced practice as a consulting engineer.

Later he became a director and consulting engineer of Marconi’s Wireless Telegraph Co, and the Marconi International Marine Communications Co. Ltd. He held these positions until the end of his life.

During the First World War, Captain Sankey volunteered his services, and was appointed Staff-Captain in the department of the Director of Fortifications and Works at the War Office. He paid personal visits to the front in 1915 and 1918.

In 1920 and 1921 he was President of the Institution of Mechanical Engineers. He was also a member of the Governing Board of the National Physical Laboratory.

His school education was acquired in Switzerland, and this was followed by studies at Mr. Rippon's School at Woolwich, and at the Royal Military Academy, which he entered in 1871.

In 1873 he received a commission in the Royal Engineers and entered upon the prescribed course at the School of Military Engineering, Chatham.

Three years later, when he was nearing the end of this training, he was one of the R.E. officers selected for employment by the Royal Commission on Railway Accidents in connexion with the important series of Continuous Brake Experiments carried out in 1876; and later on in the same year he was engaged in the War Department drawing office on the design of barracks.

In the following year he was placed in charge of the R.E. drawing office at Manchester, and the next two years he spent at Gibraltar in superintending the erection of certain batteries and barracks.

In 1879 he was appointed Instructor in Fortification at the Royal Military College, Kingston, Canada, and on the completion of this three-year service he returned to England to take up a post at the Ordnance Survey Establishment at Southampton. Here he solved certain electrotyping difficulties which had been encountered in the reproduction of maps, beside effecting other improvements of mechanical and commercial value, and in the course of his investigations became acquainted with the merits of the Willans engine of that date.

In 1889 he retired_ from the Service as a Captain, and joined the board of Messrs. Willans and Robinson, Ltd., engineers, of Thames Ditton.

Five years later, in 1904, (sic) Captain Sankey commenced practice as a consulting engineer, in which he was very successful.

Later on he became a director and consulting engineer of Marconi's Wireless Telegraph Company, Ltd., and the Marconi International Marine Communications Co., Ltd., and these positions he held to the end of his life.

He was also for several years a member of the Governing Board of the National Physical Laboratory. When the Great War broke out Captain Sankey volunteered his services, and he was appointed a Staff-Captain in the department of the Director of Fortifications and Works at the War Office, and as a link with the Civil branches of the engineering profession his work was invaluable.

His activities, moreover, were not confined to work in the home districts, for he paid personal visits to the front in 1915, and again in 1918. For these services he received the distinction of C.B., and after the War, for work on the Valuation Committee, the further award of C.B.E. was conferred upon him. Captain Sankey's death, which occurred at Ealing on 3rd October 1925, brought to a sudden and unexpected close a career of the greatest usefulness to the Institution.

Captain Sankey gained well-merited distinction in whatever department of engineering he interested himself, and, as will be seen from the following list, this Institution is indebted to him for several most instructive contributions to its Proceedings:-

In addition to the foregoing, Captain Sankey also gave the Thomas Hawksley Lecture on "Heat Engines" (Proceedings 1917 page 703), and his own Presidential Address (Proceedings 1920, page 1039). In the Research work carried on by the Institution he took great interest, and the Proceedings record interesting remarks from him in respect to Steam-Nozzles, Marine Oil-Engine Trials Hardness Tests, and other matters.

He was educated at Morges and Schaffhausen, Switzerland; the Royal Military Academy, Woolwich, and the School of Military Engineering, Chatham. He received his commission in the Royal Engineers in 1873 and served in England, in Gibraltar, and, later, as Instructor in Fortification at the Royal Military College at Kingston, Canada.

In 1882 he was appointed to the Ordnance Survey at Southampton in charge of the Trigonometrical Division, Electrotyping Department and Workshops, where he introduced the use of dynamos in the copperplate process of map printing. He described this process in a paper which he read before the Institution on "Electrolytic Deposition of Copper," and for which he was awarded the Fahie Premium. Another paper of his, entitled "A Problem relating to the Economical Deposition of Copper." gained the Paris Premium.

In 1889 Captain Sankey retired from the Service and became a director of Messrs. Willans and Robinson, Ltd., continuing on the Board until 1904, when he took up consulting work.

In 1909 he joined the boards of Marconi's Wireless Telegraph Co., Ltd., and the Marconi International Marine Communication Co., Ltd., of which companies he remained a director until the time of his death.

A number of valuable books and technical papers are due to Captain Sankey. Among these are "The Energy Chart and its Practical Application to Reciprocating Engines"; Part IV Rimmington's "Building Construction" (published anonymously); translation from the German of Professor Ritter's "Bridges and Roofs"; the editing of the posthumous works of the late P. W. Willans on "Steam Engine Trials"; a paper on "The Thermal Efficiency of Steam Engines" for the Institution of Civil Engineers; a paper on "Governing of Steam Engines" for the Institution of Mechanical Engineers; and a series of papers on "Heavy Oil Engines" in the Howard Lectures for the Royal Society of Arts.

Captain Sankey will be much missed by a large circle of personal and professional friends to whom he was known as an indefatigable worker with a great variety of technical interests on which he was actively engaged up to the date of his death, which occurred suddenly at his home in Baling on the 3rd October, 1925.

He was elected an Associate of the Institution in 1885, and became a Member in 1886. In 1901 he served on the Committee of the Birmingham Local Section (now South Midland Centre).

He was born at Nenagh, Co. Tipperary, on November 9, 1853, and received his early education in Switzerland, subsequently passing through Woolwich and Chatham, and securing his commission in the Royal Engineers in 1873. During his term of instruction at the School of Military Engineering at Chatham he was lent by the War Office to assist at the famous Continuous Brake Trials, which took place on the Lincoln branch of the Midland Railway in 1875. Subsequently, he was engaged in the office of the late Mr. Edward Woods on calculations connected with those trials.

From 1876 to 1882 he was employed in succession at the War Office (Designs Branch); at Manchester, where he was in charge of the Royal Engineers drawing office; at Gibraltar, in charge of the Military Telegraphs and Signal Station; and at Kingston, Canada, as Instructor in Fortification and Geometrical Drawing at the Royal Military College, which had just been started. In 1882 he was recalled from Canada to take up duties at the Ordnance Survey, Southampton. Here he came into touch with a technical problem which led to a complete change of vocation. The electrolytic process discovered in 1839 by Spencer and Jordan was in use at Southampton for the duplication of engraved plates, the Smee cell being used to provide the current. An Elmore low-voltage dynamo had been bought by the War Office, but could not be worked successfully. Lieutenant Sankey was directed to continue the tests, and his problem was to find an engine which would drive the dynamo steadily enough to produce a constant current. He decided that the high-speed type would be best for the purpose, and he eventually purchased a Willans three-throw engine and achieved success. It was through the purchase of this 6-h.p. high-speed engine that Captain Sankey made the acquaintance of Mr. Willans, whom he joined in 1889.

In 1892 Mr. Willans was killed as the result of an accident, and responsibility for the design of the engines, and later of the turbines, built by the firm fell upon Captain Sankey. Under his direction the firm removed from Thames Ditton, and the new works were laid out at Rugby.

In 1904 he severed his connection with Messrs. Winans and Robinson, and began practice as a consulting engineer in London.

During the war Captain Sankey was honorary Engineering Adviser to the Director of Fortifications and Works, in which capacity he performed services of great value. He was concerned among other things with the repair of machinery used by the Royal Artillery, the Royal Army Service Corps, and the Tank Corps. He also did important work as one of the engineers on the Honorary Valuation Committee.

He was elected a member of the Iron and Steel Institute in 1913.