2. View from the former railway trackbed

3. The bridge is much wider than the lane which approaches it! 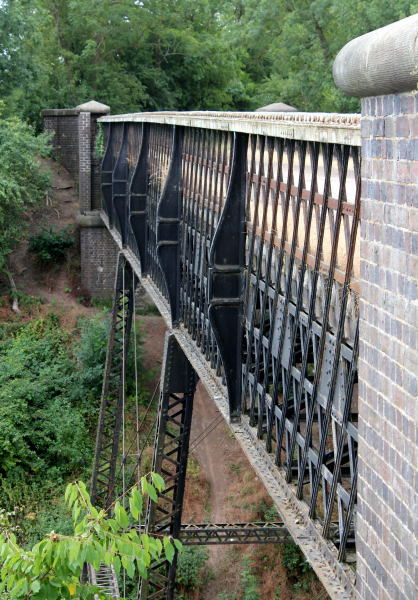 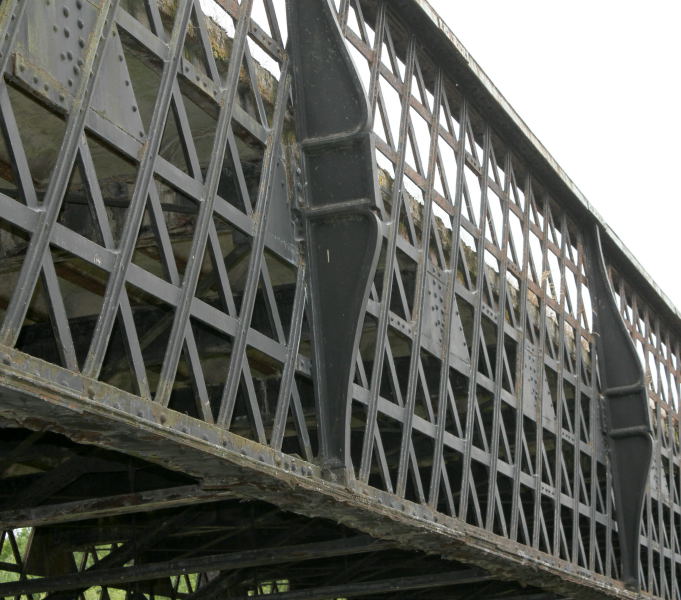 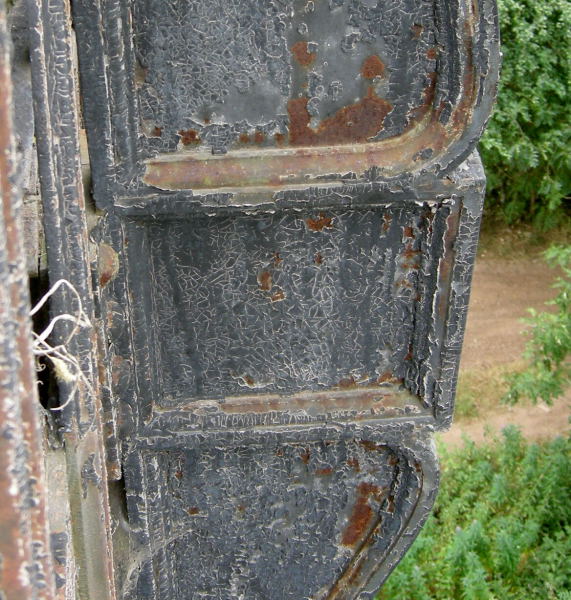 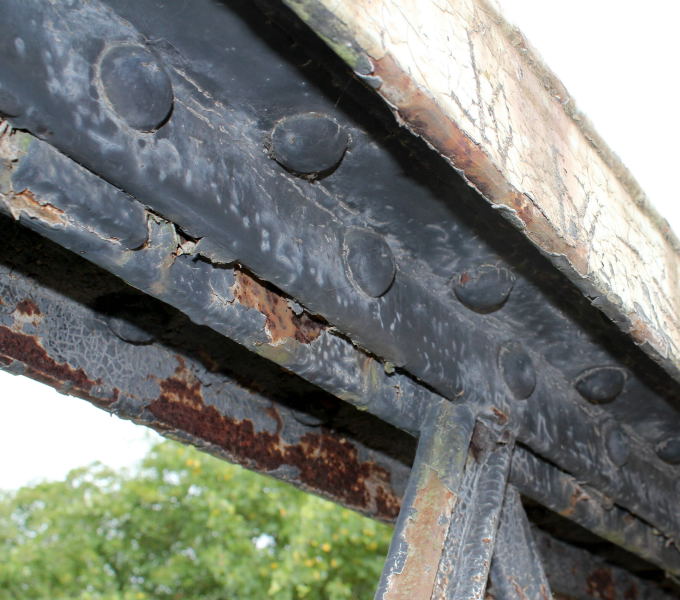 8. Underside of top chord. Note how the ribs on the 'spoke iron' are dressed away to allow the spoke iron to be riveted between the angle iron sections 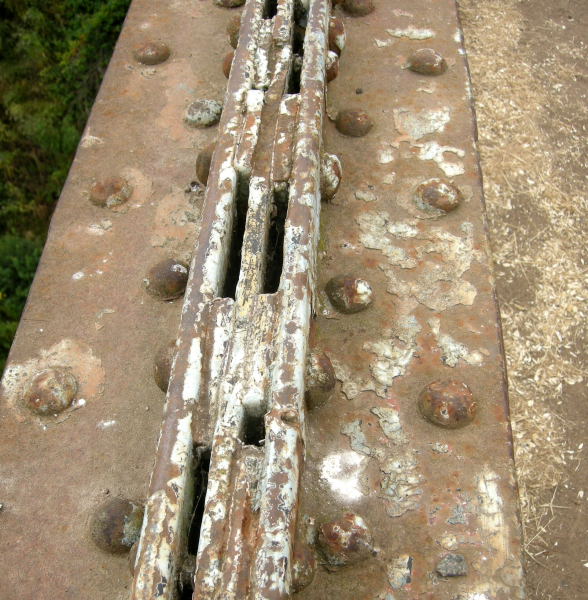 10. The northern end of the girders is housed in iron castings. This is presumably the fixed end 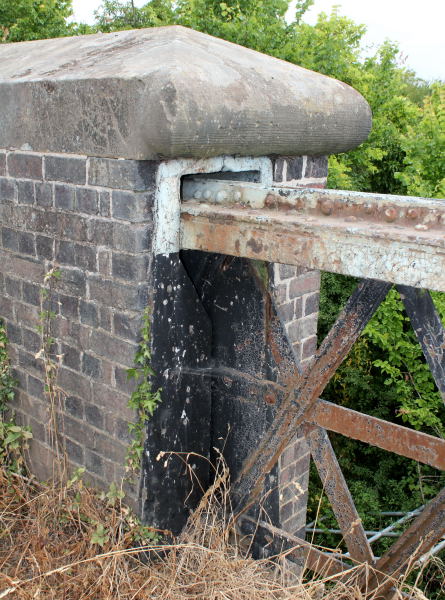 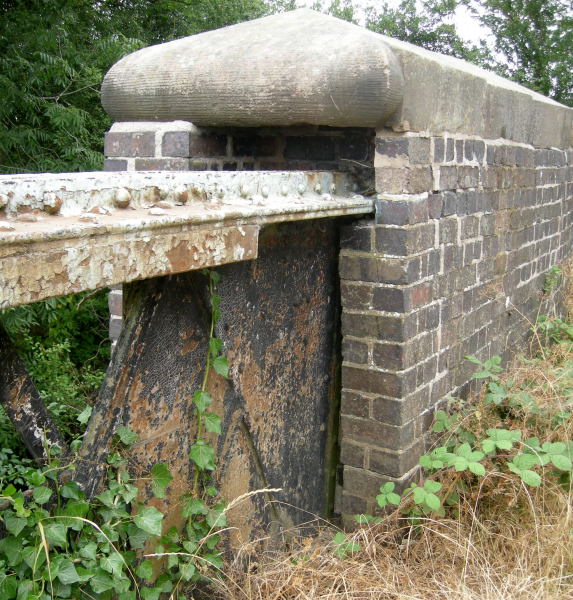 12. This is presumably the end which is free to expand 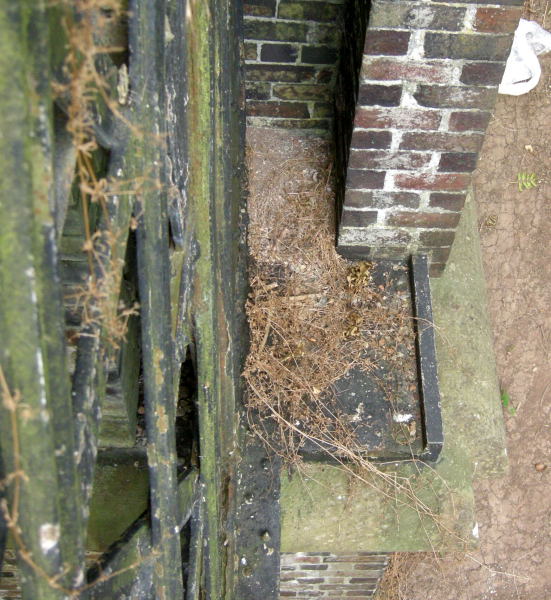 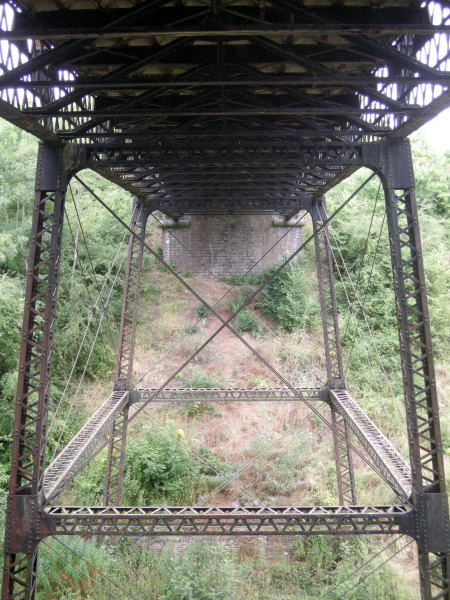 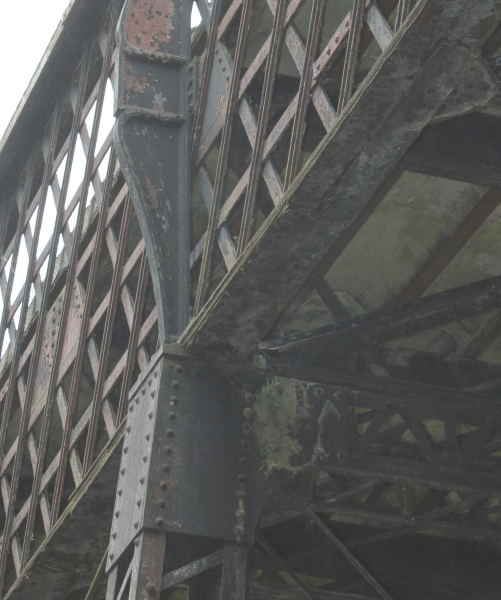 18. Showing where the girder sits on the column 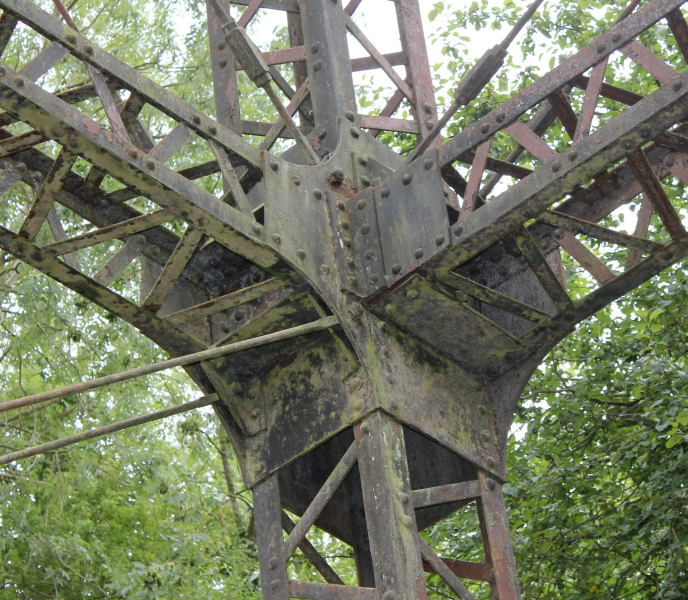 A remarkable surviving example of an early iron lattice girder bridge. It appears to be generally in excellent condition, apart from obvious corrosion of the bottom chord flange plates.

The lane crossing the bridge is totally unsuitable for road vehicles. It is not clear whether there is any easy access to the track below, but descent down the slope from the bridge is NOT recommended!

When completed in 1850, it was, briefly, the longest single span wrought iron truss girder bridge in the world. Later in the 19thC four props were added at one-third span positions. The designer was William Thomas Doyne, working for Robert Stephenson, who was the Engineer for the line.[1]. It carried a road over the Rugby and Leamington Railway.

The original concrete deck was replaced with a stronger concrete structure at some point.

See here for more information on history and structural details.[3]

1851 'INSPECTION AND COMPLETION OF THE RUGBY AND LEAMINGTON RAILWAY .....
At Hunningham, there has been constructed a Wrought Iron Lattice Bridge, for carrying the public road from Bascote, over the extensive cutting already described It is of 150 feet span, remarkable for the lightness of its appearance, being an open net work of slight bars, and rises to an elevation of fifty-four feet above the railway. It is allowed to be one of the finest iron bridges in this country built upon the lattice principle. Some of a similar description have been built by Sir John McNeill, in Ireland, but economy of material and mechanical arrangement of the one now under notice are considered to be superior to all others. Drawings and a description of this bridge were laid before the Institution of Civil Engineers in April last, by Mr. W. T. Doyne, the resident engineer of the Rugby and Leamington line, for which the Committee of the Institute awarded that gentleman a premium. From that, and other available sources of intelligence, we learn that the bridge consists of two girders 156 feet in length, and 10 feet 6 inches depth, placed at a distance of 20 feet apart and connected together by means of wrought-iron trnasverse girders, and by a system of horizontal diagonal bracing. The bottom of the main girders are formed of two angle irons, and wrought iron plates, eight in number at the centre, but diminishing to three at the ends, and of such dimensions as to make the effective sectional area at the centre, after deducting the loss by rivet holes, equal to 26 square inches; that of the top, which is somewhat differently constructed so as the better to resist compression, being equal to 40 square inches. The lattices are formed of a series of bars of spoke-iron, intersecting each other an angle of 60 degrees, being crossed at those points, by longitudinal bars, for the purpose of giving additional rigidity, and of making a closer parapet The transverse girders, 7 feet 6 inches apart, are each formed of a plate of wrought iron, with two angle irons at the top and the bottom ; these are covered with corrugated galvanised iron, one-tenth of an inch thick, upon which concrete, and then a layer of gravel and loam metalling, 6 inches thick, are laid. This bridge has been erected by Messrs Smith, Smith, and James [Jarnes?], of Leamington, upon a platform which gives to the girders a camber of 7 inches in the centre, which reduced to 3 3/4 inches upon removing the platform which it still retains. The total cost of the bridge has been about £3500., including brickwork and masonry, approach roads and fencing. During the progress of the works, Mr. Doyne made some experiments upon the strength of rivets of different sizes, from which it appeared, that the average breaking weight, per square inch of sectional area, was 35.10 tons for a chain joint, and 18.82 tons for a lap joint. Mr. Doyne has constructed a model to a scale of one inch to a foot, for the purpose of illustrating the mechanical principles upon which this and other bridges of similar construction depend for their strength. The top and bottom strings of this model are made of mahogany bars, put together like a chain of a suspension bridge, overlapping one another at the ends, and united by a turned iron pin passing through them; by this means it is ensured that all strains upon the top and bottom must be in the direction of their lengths. The lattice bars are made in such a manner as to show clearly the truth of the theoretical reasoning that they are acting alternately as struts and ties; those which are in compression being made of mahogany bars, merely let in at the ends, but not fastened in any way, while the ties are made of hoop-iron chains, the former not capable of taking any other strain than that of compression, and the latter tension. The model is so constructed that any part of it can be taken out and a dynamometer substituted for it, so as to measure the strain upon that portion, the strains on all the different parts have been measured with loads applied in various ways, and they agree in a remarkable manner with the theoretical deductions. Investigations carried out in this manner, added to experiments upon the strength of the materials used, place the efficiency of bridges of this character beyond a doubt.'[4]