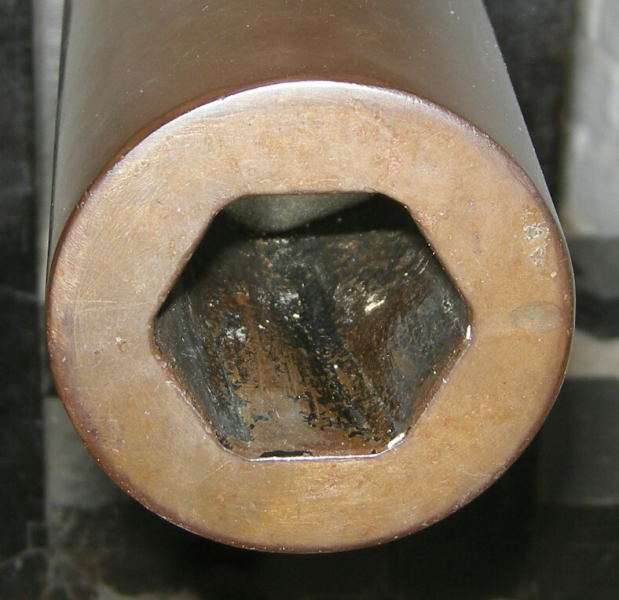 1859 Whitworth was commissioned by the War Department to design a replacement for the Pattern 1853 calibre 0.577-inch Enfield rifle, whose shortcomings had been revealed during the recent Crimean War. The Whitworth Rifle had a smaller bore of 0.45 inch (11 mm) which was hexagonal, a longer bullet and tighter rifling than the Enfield, and its performance during tests in 1859 was superior to the Enfield's in every way. The test was reported in The Times on April 23 as a great success. However, the new bore design was found to be prone to fouling, so it was rejected by the British government, only to be adopted by the French Army. Some of these rifles found their way to the Confederate states in the American Civil War, where they were called "Whitworth Sharpshooters". Queen Victoria opened the first meeting of the British Rifle Association at Wimbledon, in 1860 by firing a Whitworth Sharpshooter from a mechanical rest. The rifle scored a bull's eye at a range of 400 yards (366 m).

Guns (rifles and cannon) made by Whitworth in the late 1850s and early 1860s were variously marked either with the name Whitworth or Manchester Ordnance & Rifle Co [1] The same source comments that the rifles were almost certainly constructed by J. W. Edge of Manchester, using Brazier locks and metal components from Preston and Palmer. Presumably the highly advanced barrels and the required precisely-made ammunition were made by Whitworth.

It is not possible from the 1863 Slater’s directory to pinpoint No. 51 Sackville Street. However, Goad's Insurance Plans Map No. 50, dated 1893 (updated 1899) shows No. 51 as one of a group of industrial buildings at the southern corner of a block bounded by Sackville Street, Canal Street, Chorlton Street and Whitworth Street. These buildings were built on the site of a former canal wharf, while the northern part of this block formerly accommodated Whitworth’s Chorlton Street Works. The site is now home to a college building and a garden.

1866 Company wound up. 'Joseph Whitworth and Company and the Manchester Ordnance and Rifle Company. OTICE is hereby given, that the affairs of the above Company having been fully wound-up a General Meeting of the Company will be held at the offices of the Company, No. 28, Pall Mall, in the county of Middlesex, on Friday, the 13th day of July, 1866, at ten o'clock in the forenoon, when and where the Liquidators of the said Company will lay before the said Meeting an Account showing the manner in which the winding up of the said Company has been conducted and its property disposed of, and for hearing any explanation that may be given by the Liquidators'[2]