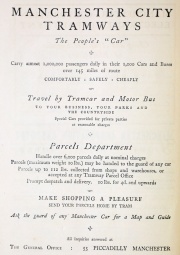 1893 Salford Corporation suggested that a joint committee could be established to consider taking over the operation of the company's lines at the expiration of the lease.

1897 The Manchester Corporation Act paved the way for municipal operation of the trams by granting the powers necessary to operate the lines under electric traction.

The electric tram system was to be introduced in phases because the number of tramcars required was beyond current manufacturing capacity. The Corporation gradually replaced the Manchester & Salford Tramway routes as vehicles became available.

Further sections of the system were brought into use over the next 2 years, including the first service to Piccadilly in 1902.

1921 Manchester Corporation, jointly with Ashton Corporation and Stalybridge Joint Board, took over the working of the Oldham, Ashton and Hyde Tramway on the expiry of its lease, making it possible for Manchester trams to work the Ashton via Guide Bridge section.

1923 the Middleton Electric Traction Co was acquired jointly by Middleton, Chadderton and Rochdale. Middleton granted Manchester a 30-year lease on the ex-company tracks on condition they were connected to neighbouring lines, which they duly were, enabling Corporation trams to run through to Rochdale.

Late 1920s: Manchester (in common with most other municipal authorities) was experiencing an increase in private competition to its tram services. The Tramways Department, with the co-operation of the surrounding local authorities, began to set up a network of local express bus services. It was an immediate success, prompting more services to be inaugurated.

1937 the City Council decided to abandon the tramway system completely, anticipating that this could be done over the next three years, but the start of war in 1939 delayed these plans.

1949 The Stockport trams were the last survivors when they ceased operation in January.