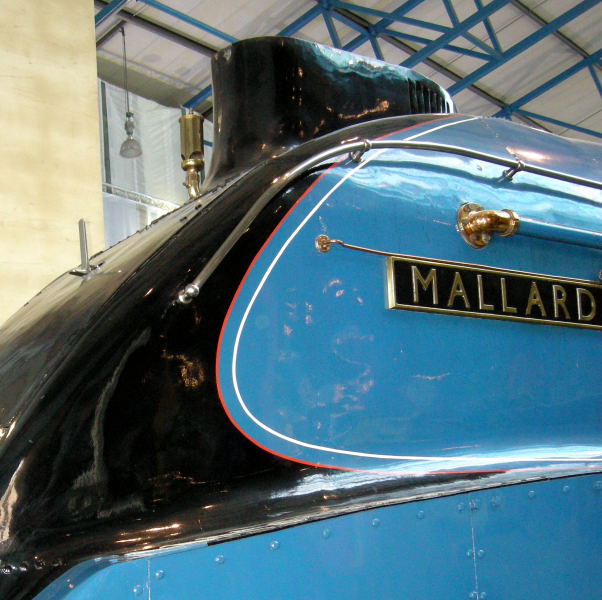 Number 4468 Mallard is a London and North Eastern Railway Class A4 4-6-2 Pacific steam locomotive built at Doncaster in 1938.

The Mallard was designed by Sir Nigel Gresley as an express locomotive. Its wind-tunnel-tested, aerodynamic body allowed it to reach speeds of over 100 mph (160 km/h). Mallard was released into traffic for the first time on March 3rd 1938. She was the first A4 to be fitted with a Kylchap double blast pipe from new. This was one of the features that would shortly select her for the attempt on the world rail speed record in the following July.

Mallard was in service until 1963, when she was retired, having covered almost one and a half million miles (2.4 million km).

She was restored to working order in the 1980s, but has not operated since, apart from hauling some specials between York and Scarborough in July 1986 and a couple of runs between York and Harrogate/Leeds around Easter 1987. Mallard is the only surviving A4 in LNER livery and in as-built original condition with side valances (although the valances are replicas).

The locomotive is 70 ft long and weighs 165 tons, including the tender. It is painted LNER garter blue with red wheels and steel rims.

Mallard was the perfect vehicle for such an endeavour; one of the A4 class of streamlined locomotives designed for sustained 100+ mph (160 km/h) running, it was one of a small number equipped with a double chimney and double Kylchap blast-pipe, which made for improved draughting and better exhaust flow at speed. The A4's three-cylinder design made for stability at speed, and the large 6 ft 8 in (2.032 m) driving wheels meant that the maximum revolutions per minute was within the capabilities of the technology of the day. Mallard was five months old, meaning that it was sufficiently run-in to run freely, but not overly worn. Selected to crew the locomotive on its record attempt were driver Joseph Duddington (a man renowned within the LNER for taking calculated risks) and fireman Thomas Bray.

The locomotive had had problems with the middle big end previously, so a "stink bomb" of aniseed oil was placed inside the big end, that would be released if it overheated. Shortly after the attainment of this record speed, Mallard suffered an overheated inside big end bearing and had to limp back to Peterborough after setting the record, it then travelled to Doncaster for repair. This had been foreseen by the publicity department, who had many pictures taken for the press, in case Mallard did not make it back to Kings Cross.

The Ivatt Atlantic that replaced Mallard at Peterborough was only just in sight when the head of publicity started handing out the pictures. Inaccuracies in the machining and setup of the Gresley-Holcroft derived motion (which derived the valve motion of the inside cylinder from those of the other two, avoiding a hard-to-maintain valve gear linkage between the frames) meant that the inside cylinder of the A4 did more work at high speed than the two outside cylinders; this overloading was mostly responsible for the failure.

Mallard wore a variety of liveries throughout her career, these were: garter blue as 4468, LNER wartime black from June 13th 1942, later wartime black with the tender marked as "NE" from October 21st 1943 as 22 with yellow small stencilled numbers, post-war garter blue with white and red lining from March 5th 1948 with stainless steel cab-side number 22, British railways dark blue as 60022 from September 16th 1949, Brunswick green from July 4th 1952 and regaining her original LNER garter blue for preservation in 1963.

As with all 35 of the Gresley A4 pacific steam locomotives, Mallard was fitted with streamline valances, or side skirting, when she was built. This was found to hinder maintenance and, like her sisters, it was removed. 4468 lost her valances during a works visit on June 13th 1942, regaining them in preservation in 1963.