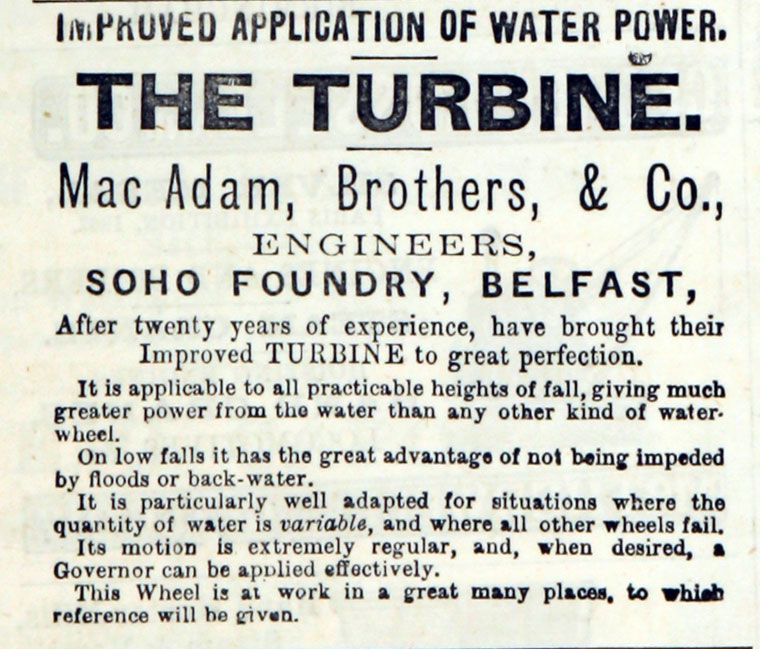 1848 'The largest steam-engine ever made in Ireland is now being shipped at Belfast for the Pacha of Egypt. It is one of a number intended to be erected on the banks of the Nile, for pumping water to irrigate the land. The cylinder is 62 inches in diameter, with a 10-foot stroke ; and the pump will throw up 10,000 gallons of water every minute. The makers of this engine are Messrs. MacAdam, Brothers, and Co., of the Soho Foundry, Belfast' [1]

1850 'THE IMPROVED TURBINES OR HORIZONTAL WATER-WHEELS.
THE SUBSCRIBERS ARE PREPARED to undertake the erection of Turbine Water Wheels of the improved construction, and for any height of fall. - Reference can be given to several powerful ones now at work in this neighbourhood, which they have lately erected. M'ADAM, BROTHERS, & Co., Engineers, Soho Foundry. Belfast, November, 1850.'[2]

1894 'TO BE SOLD.
FOUNDRY PREMISES FOR SALE.
THE FOUNDRY PREMISES, known as the SOHO FOUNDRY, BELFAST (hitherto tho property of Mr. M'ADAM, who has been obliged to retire from business on account of failing health and old age), and the Engines, Machinery, Tools, and other contents, are offered for Sale by PRIVATE CONTRACT. These Premises are situate in Townsend Street, Belfast, portion extending backwards to Boundary Street, end both of which streets there is an extensive frontage. The Premises comprise an area (roughly) of about 1 1/2 acre, and are situate in one of the best positions in Belfast, and are well known, the business having been carried on in them for many years. They held under Fee-farm Grants for over, at moderate rents, and comprise large and suitable Engineering and Moulding Shops, Smithy, and other necessary premises, and large Yards. Machinery includes suitable Engine and Gearing, Lathes, Drilling, Slotting, and Shaping Machines, Cranes, and other Machines;, Patterns, and Tools. ....' [3]

They made Fourneyron-type water turbines to the design of William Cullen (of Armagh) and Robert MacAdam. One of these was supplied to Catteshall Mill on the River Wey at Godalming in 1869-70. It ran until the 1960s, and when the site was redeveloped in 1981 the main components were saved for preservation. They were moved to Ironbridge, where they can be seen in the yard at the Enginuity Museum.