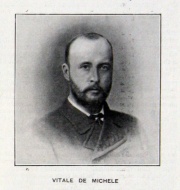 VITALE DOMENICO DE MICHELE, son of the late Mr. C. E. de Michele, was born on 11th November 1848, in Westminster, where his father owned and edited the "Morning Post."

At an early age he was sent to Westminster School, where he remained until he was sixteen, when he was apprenticed to Messrs. Robert Stephenson and Co. at the South Street Engine Works, Newcastle-on-Tyne. During this time he invented a form of reversing gear which has been largely used in locomotives and marine-engines.

Having passed through the various shops and drawing offices, he was selected, at the age of nineteen, as the representative of the firm in charge of their exhibits at the Paris Exhibition in 1867.

At this time it was his great desire to follow up either locomotive or marine engineering, but his father, who had retired from the consular service and had acquired an interest in the Nine Elms Cement Works, near Gravesend, required his services as works manager. There he worked very hard in developing the growing business, and designed new buildings, wharves, kilns, and mills for the manufacture of cement. Having thoroughly mastered the process of cement-making, he set to work to make improvements in each step of the manufacture, which resulted in the producing of more uniform qualities, of higher strength and endurance, whilst the economics he introduced tended to lower the selling prices and to bring cement into more general use.

Among the improvements effected may be mentioned a wash-mill which had a raised rim of cast-iron plates surmounted by revolving plates, which would not allow the cement to pass through until it had been ground sufficiently fine. As the cement had not to pass through gauze, it was possible to wash it with one-third of the quantity of water formerly employed. It was then pumped through cast-iron mains direct to the drying floors, thus eliminating the cost of settling ponds, the labour of digging and wheeling, and the capital cost of a large area of land. To economise fuel, he designed kilns in which the waste heat, instead of going direct to the atmosphere, passed under the cast-iron and brick arch drying-floors.

About 1871 he recognised the need for more reliable tests, and he invented the increasing leverage cement-testing machine, and later eliminated vibration by actuating the lever hydraulically. He also brought to a successful issue the manufacture of cement on a continuous principle, after the manner of the paper-making machine. So carefully did he conduct his chemical and mechanical tests of cement that he brought up the quality to the high pitch required for rock lighthouses. He took a practical interest in the smoke question, and invented a stove and fireplace with rotatory churn bottom bars, by which coal or coke were put in behind the fire, which thus always had a bright front and made no visible smoke.

In addition to managing the works at Gravesend he carried on a consulting practice at Westminster, and among the works with which he was connected were the water-supply of Higham and Aylesford in Kent, the construction of wharves at Rochester, Greenhithe, and Strood, and the strengthening of the movable span of Rochester Bridge under the late Sir Joseph Bazalgette, at whose death he was appointed consulting engineer for the work. He was a Justice of the Peace for Kent.

His death took place at his residence, Higham Hall, near Rochester, on 21st March 1906, in his fifty-eighth year.

We regret to have to record the death at the age of fifty-seven, at Higham Hall, Rochester, on the 21st of March, of Mr. Vitale de Michele, M.Inst.C.E., M.Mech.E., &c. Mr. de Michele was the third son of the late Mr. Eastland de Michele, for many years British Consul at St. Petersburg.

He went in 1864 as articled pupil to the South-street engine works of Robert Stephenson and Co, of Newcastle-on-Tyne, and remained at their works until he had attained his twentieth year, having passed through the various shops in the locomotive side, and afterwards being for some time engaged in erecting in the marine engine works, working with Mr. T. W. Carrington, of wire ropeway fame and with his friend, Mr.. R. E. Middleton (Chief of the Staff for the contractors of the Forth Bridge), at several o£ the single crank tandem compound engines of Mr. Alfred Holt's ships.

Mr. de Michele was selected by Messrs. Stephenson as their assistant representative at tho Paris Exhibition of 1867, when he was not nineteen.

About the year 1870 Mr. Eastland de Michele retired from the diplomatic service, and joined the firm of Francis and Co, of Nine Elms, Vauxhall, and Cliff Creek, near Rochester....[more including image]