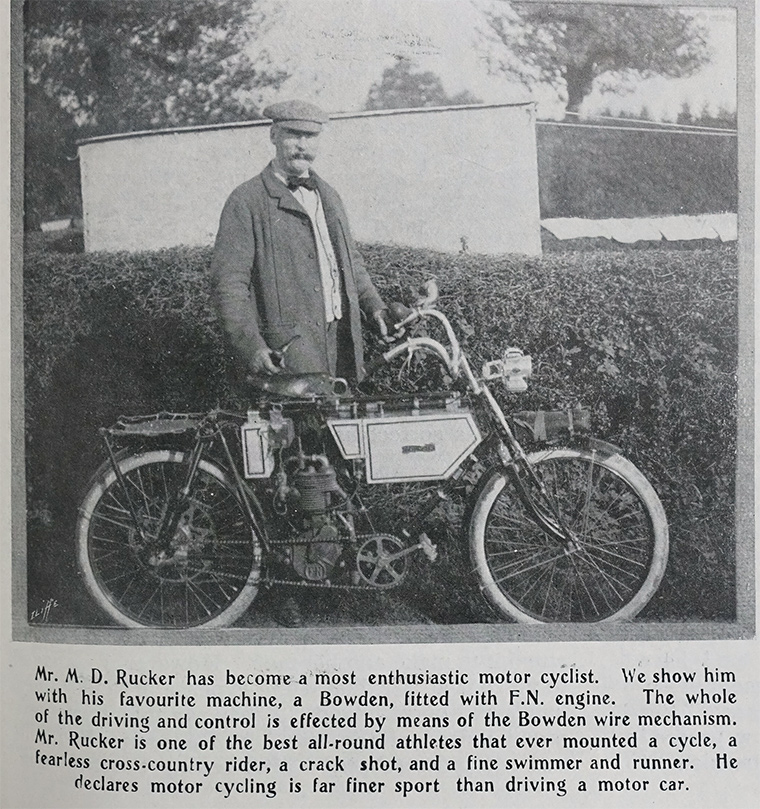 T. Harrison Lambert introduced M. D. Rucker to Humber and he became the manager of the company's Holborn Viaduct branch.

1896 of Brambles, Walton-on-Thames. 'Director of public company'. Subscriber to shares in the Dunlop Pneumatic Tyre Co at its formation. [5]

1896 Along with the directors, Rucker was dismissed from Humber after the scandal about the Humber Extension Company.

1905 Declared bankrupt. Claims he made over £450,000 in the Dunlop Pneumatic Tyre Co promotion but has lost it on the Stock Exchange and with New and Mayne and the Pennington Cart patents[7] [8]

1905 August. A sitting was held the London Bankruptcy Court, on Tuesday, before Registrar Linklater for the public examination of Martin Diederich Rucker. In answer to Mr. E. S. Grey, Official Receiver, the debtor stated that he started business in 1882 in partnership a cycle manufacturer at Bethnal Green. He arranged with his creditors in 1885, paving 7s. Od. on claims to the amount of £3,000. In 1896 he paid the balance of the debts, with interest at 5 per cent. He became manager of the London branch of Humber and Co., and subsequently on the business being transferred to Humbers (Limited), he became general manager of that company at £800 a year, with commission. That employment ceased in ... when his income was £9,000 a year. In 1896 he was introduced Mr. E. Terah Hooley by Mr. Harrison Lambert, and became interested with him in the promotion of the Dunlop Pneumatic Tyre Company (Limited), under an arrangement for profit sharing. The gross profit on the deal was £3,000,000; the profit divisible between them was about £1,000,000. He received in "meal or malt" £451,241, of that sum £50,000 was represented by the yacht "Venetia," which afterwards sold to Mr. Whitaker Wright for £30,000. In further payment he took the King's yacht "Britannia,"' valued at £6,250 and afterwards sold it for £3,000. On the failure of Mr. Hooley his proof was admitted against the estate for £1,150. He sold that claim to Mrs. Hooley for 5,000 shares in the Siberian Gold Fields Company, Limited, which he afterwards sold for £500. In 1896 he purchased the Woodlands Estate Surrey, and became Master of the West Surrey Staghounds. He farmed land there and at Slyfield, Cobham, where he preserved game. He was also an owner and breeder of racehorses and a yacht-owner. He then possessed sufficient capital to justify his expenditure. It was true that he did not invest his capital and live upon the interest, but used it and lost in various speculative investments. In 1898 he registered himself as a limited company under the style of the Charlwood Stock and Dairy Company. Limited. It acquired the Woodlands stock and furniture and the Slyfield property. This was done with a view to his raising money by debentures instead of by bill of sale. He raised £8,000 on 10 per cent, bonds, and upon the realisation of the property only sufficient was realised to pay charges and current debts. In 1889 he moved to Ifield Hall, Sussex, rented by his wife at £305 a year, and in October 1904, he removed to Woodcroft, Earlswood, at a rental of £150 a year. His expenditure had been as follows: — Over Woodlands, to living, etc., £95,956; it sold for £53,250. resulting a loss of £38,706; over Sefton Lodge and tan gallon, purchased from the late Mr. Harry McCalmont, £36.049; lost over the purchase and sale of racehorses, £23,000. He lost £3,000 on the purchase and sale of carriage horses. A loan of £1,500 to former Master of the West Surrey Staghounds had not been repaid. Since 1899 he had carried on business Street as a commission agent, selling "anything he could." He had been a director Humbers (Limited), the Coupe and Dunlop Brougham Company (Limited), the Clement-Gladiateur Companv (Limited), the General Assurance and the Bradlev Motor Patents (Limited). He had used his wife's banking account since 1902. his own having then "run dry," and of his present liabilities £2,397 was due to his wife, £1.089 for law costs, £3,995 for personal debts and £3,307 upon guarantee. The examination was concluded.'[9]