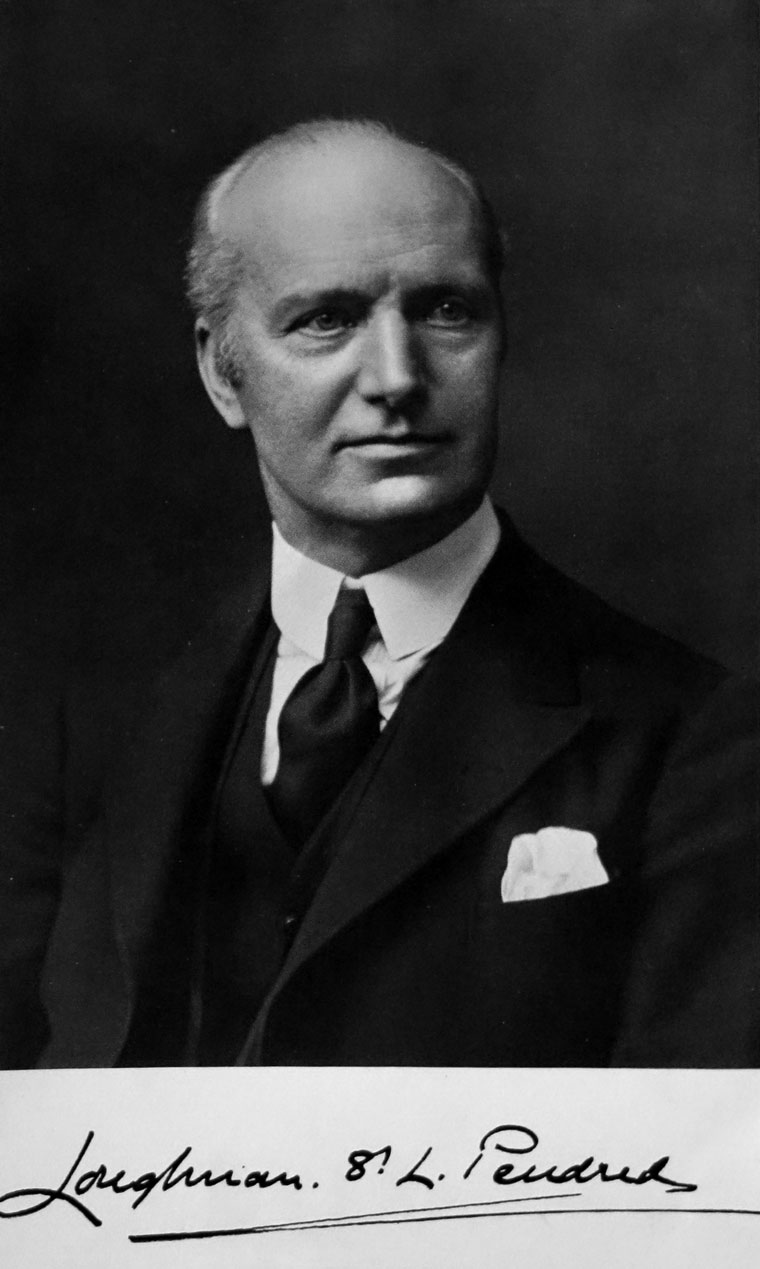 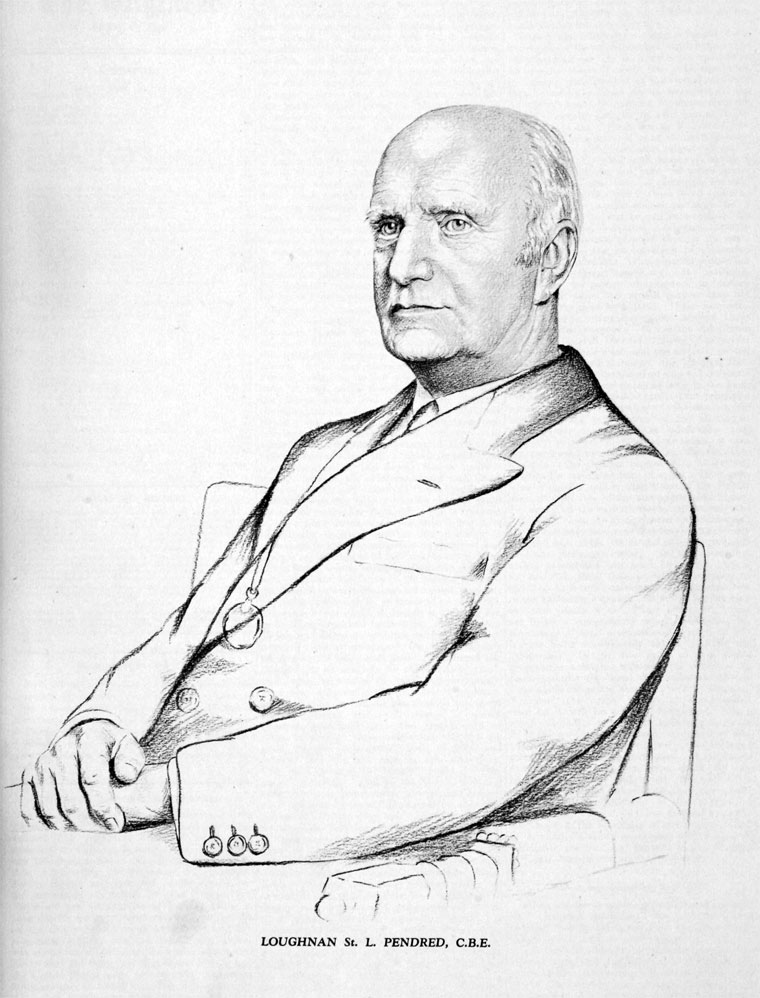 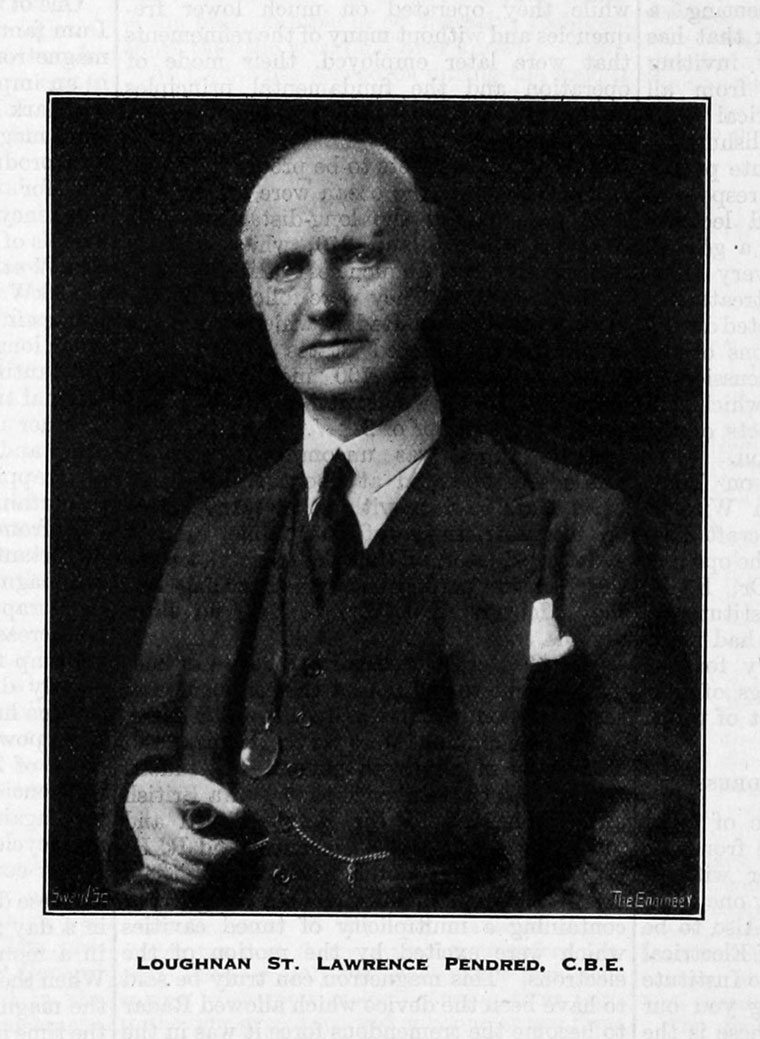 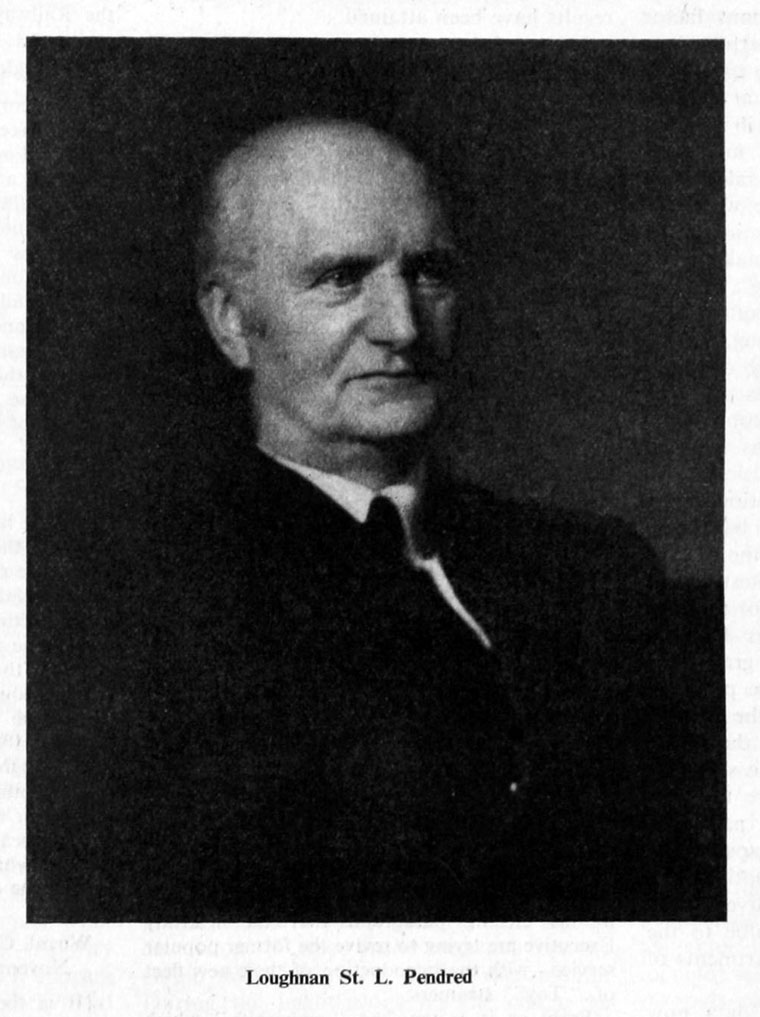 Member of the London Committee of the Newcomen Society.[1]

LAST Friday, a few days before his eighty-third birthday, there died Mr. Loughnan St. Lawrence Pendred, C.B.E., Editor-in-Chief of this journal from 1905 to 1946.

Often in these columns we are called upon to record the deaths of famous men, of men who gained the admiration, the respect and the esteem of their fellows. But never, not even upon the death many years ago of Loughnan's father, who had preceded him in the editorial chair, have we done so with such regret and of great a sense of personal and irreparable loss. For, over a period of forty years in the editorial chair, Loughnan Pendred personified THE ENGINEER and after his retirement in 1946 those who had worked under him and even those later arrivals who knew him only by his occasional visits to the office were very much aware how his influence permeated their work. For his was indeed a powerful personality, but one which, besides winning him respect and esteem, earned for him also the deep affection of all who came to know him closely.

Mr. Loughnan Pendred was born in 1870, the second son of his father. He was educated at the Central Institution, South Kensington, apprenticed with Davey Paxman and Co., Ltd., of Colchester, and subsequently gained experience in the works of Van den Kerchove at Ghent, the old Western Railway of France, and the ordnance department of Sir W. G. Armstrong, Mitchell and Co., at Elswick.

In 1896 he joined his father in THE ENGINEER office, and in 1905, at the age of thirty-five, he was chosen to succeed to the editorial chair. He retired in 1946.

Those are the facts. But how little they tell us a bout his life! For it is not the experiences a man has that create his personality; it is what he makes of them. Loughnan was intensely interested in all he saw or heard or read. He found something to learn everywhere. Even at the very end of his life the active, energetic and resourceful mind that inhabited an enfeebled body was still intelligently recording, criticising and comparing the facts and opinions that books and newspapers brought him or the observations of his own eyes set before him. As the body failed, spirit and humour remained indomitable. From boyhood he was accustomed to observe and learn. A strong intelligence permitted him to discover the weaknesses of arguments and theories, and an Irish wit, natural to him, made it possible for him to comment and criticise without offence. It would be interesting to know what impression he made upon teachers such as Silvanus Thompson John Perry and Dr. Armstrong under whom he studied. They certainly made an impression upon him. Some men feel in after life a veneration for their teachers. But his feeling seemed to be one of respectful irreverence! In Belgium and France he undoubtedly learned much practical engineering and acquired a particular interest in locomotives.

But he would not have been himself if he h~d not also learned to appreciate good wtne and good cooking ! At Elswick, again, his job approached that of what would now be termed a "progress engineer." But it was probably there that he developed a critical appreciation of the merits and demerits of machine tool design, knowledge that he used to the full in later life.

Nor did be cease to learn when he joined THE ENGINEER. He learned so speedily and with such a will, indeed, that when his father retired only nine years later he had already acquired sufficient experience to succeed him. For it was only experience he needed. The quality of his mind, its balance, hs independence, and particularly its humour had long since fitted him for the post. So his life's work began. What had gone before had been preparation for it. What he made of it can be seen in the more than eighty volumes that were produced under his superintendence. We might well repeat, as we look at those shelves the great obituary words over the North door of St. Paul's, "Si monumentum requiris, circumspice."

His first years in the editorial chair were spent upon the introduction of a number of changes of style and of certain new editorial features designed to improve the appearance of the paper and its real value to engineers.

Then the first world war broke out, bringing to him problems with which his father had never had to struggle. Imperturbably he solved them. During that period he undertook to edit, in addition to this journal, The Ministry of Munitions Journal, receiving at the end of the war a personal letter of thanks (much treasured) from Mr. Lloyd George.

At that period, too, he began and continued into the peace that followed a series of articles which many older engineers will recall, entitled " Random Reflections," in which repeatedly his characteristic wit peeped out. Imperturbably again in the 'thirties he faced the problems and difficulties of the period of the great depression, cheerfully accepting economies and confidently predicting that though volumes must shrink in size for lack of information about engineering activities, sooner or later they would expand again.

The outbreak of the second world war found him still in the editorial chair. Though then nearly seventy he remained at his post, attending the office regularly, making light of blitzes, flying bombs and rockets, and carrying on the journal and maintaining its standards despite a staff that became more and more depleted. Only when it was over did he retire remarking that changes would have to be made to modernise the journal and that younger men should take it on : but characteristically showing a deep and constructively critical interest in what hi successor proposed to do.

But there were two sides to Loughnan Pendred's life, not one. Before the war, at the dinner of the Council Dining Club of the Institution of Mechanical Engineers subsequent to the presentation of a presidential address, it was the custom for menu cards to be printed carrying a humorous cartoon of the president. Mr. Pendred was president of that Institution in 1930-31 and upon the menu he was portrayed double-headed like the well-known advertisement for Shell petrol with the inscription, divided between the two heads, "The Engi-stution." Appropriately enough it expressed the double interests of his life. For if his prime interest lay with the fortunes of THE ENGINEER his desire to serve the Institution came a very close second. He served on its Council from 1920 to 1934. Though dubious of the value of a Charter to the members (he felt the Institution would be less restricted in its actions without it) he still felt it to be an honour to be president in the year during which a Charter was granted it. During his year of office he represented the Institution on the occasion of the fiftieth anniversary celebrations of the American Society of Mechanical Engineers, delighting its members with superb speeches in which profound thought was lightened by the puckish humour and sparkling Irish wit which had already made him famous in his homeland as an after-dinner speaker or, indeed, a speaker upon any other occasion. For invariably he was well worth listening to. The profundity, the wit and the humour are still there for any who care to read in the Presidential Address recorded in the "Mechanicals' " Proceedings.

But if the "Mechanicals " came first in his affections, other bodies delighted to honour him in the years between the wars and he was as delighted to serve them . He was a founder member of the Newcomen Society and deservedly twice its president. For he had a wide knowledge and a deep interest in engineering history. His " Eulogy of Richard Trevithick " at Dartford Parish Church in past-president of the Institution of Engineers-in- Charge ; an honorary member of the " Juniors," and a member of the Iron and Steel Institute. He served on the Council of the British Standards Institution.

In 1934 he was created C.B.E. in recognition of his services to the engineering profession. Amongst younger men (those now approaching middle age) Mr. Pendred inspired, as one of them has recently expressed it, "Victorian Awe." It is not a term those closer to him would have chosen. For upon repeated contact with him awe soon evaporated and was replaced by deep affection, mixed with respect for his wisdom.

Nor was he Victorian. It was to the Edwardian age that he looked back, an age in which the rugged individualism of the early Victorians had been softened by humanism. It is not easy to remember that he was in his forty-fourth year when the first world war began! Between the wars he was wholly at home. For, like him, his contemporaries, struggling with the new problems that beset them and which made themselves evident in the General Strike of 1926, the great depression of the 'thirties, and widespread unemployment, looked back nostalgically to the quieter, more secure pre-war days.

Being very widely read, as many Victorians and Edwardians were, and possessed of an imaginative intelligence and a gift for writing and speaking, he could express to them their own feelings not only about technical advances, but the way of the world, too. But, even so, the world was already just a little strange to him. He was, for example, keenly interested in wireless. But the interest lay rather in the making of wireless sets in his home workshop than in what wireless brought to him over the air.

The activity made up for the fact that his children were now too grown-up to delight in the model railway and other toys he had formerly made for them. He was, too, interested technically, scientifically and critically. But that he was never really impressed by wireless as a means of expression is illustrated by the fact that during the last few years of his life the set was relegated to the kitchen! Again, though he fully appreciated the convenience of a motor-car he never learned to drive.

The second world war brought out in him, as emergencies always did, the very best. But when it was ended he seemed to sense that the world had changed still further and that ideas now current were strange to him and by no means wholly likeable. Not that he ever become "hidebound." It was never a word that could be used of him. He remained intensely interested in the fortunes of THE ENGINEER, of the Institution of Mechanical Engineers, and the world at large, and, as ever, constructively critical of everything done or proposed, or any view expressed, looking forward rather than back. But at home he welcomed with special enthusiasm his son's adoption of angling as a sport and designed and made for him a series of excellent "spinning" reels. There his inventiveness had full play. He had always loved the "White Knight" in Through the Looking Glass, and age had ripened his ingenuity. Here was solid familiar ground for the exercise of the skill and craftsmanship he had so long honoured in others. Now he has gone. Yet however long THE ENGINEER may continue to exist in the future his influence will be felt by those who follow him 10 its production. He, and his father before him, have created a living and beneficent tradition.

A Memorial Service will be held at The Queen's Chapel of the Savoy on Friday, December 11th, at 12.15 p.m.