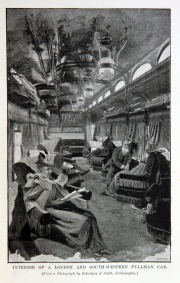 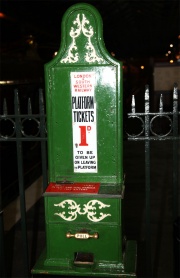 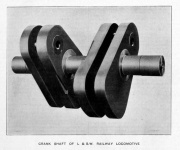 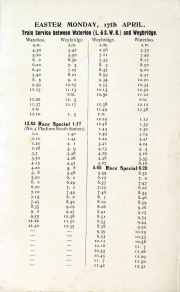 1921. Trains for the Bournemouth Service by S. Warner, and engineer from Eastleigh.

1834 The company was incorporated as the London and Southampton Railway.

1839 The name was changed to the London and South Western Railway.

Its ultimate network extended from London to Plymouth via Yeovil, Exeter and Okehampton with branches to Barnstaple, Ilfracombe and Torrington and Padstow and Wadebridge — a territory in which it was in direct competition with the Great Western Railway — and, via Basingstoke, Winchester and Southampton, along the Dorset coast to Bournemouth and Weymouth.

It also had a large number of branches which connected to places such as Portsmouth and Reading, and some joint railway operations with others — including the Somerset and Dorset Joint Railway.

In 1840 the 76.75 mile line ran from Vauxhall, London to Southampton with stations at Wandsworth, Wimbledon, Kingston, Esher and Hampton Court, Walton, Weybridge, Woking, Farnborough, Winchfield, Basingstoke, Andover Road and Winchester. Fares for the full one-way journey ranged from 20s in first-class to 7s in 3rd in the Goods train. [1]

1912 Adopted a proposal for a 47 mile third rail DC electrification from Waterloo to the Hampton Court and Shepperton branches and the Kingston and Hounslow loops with power supplied from a purpose built power station at Wimbledon. 84 three coach electric units were converted from former steam hauled suburban sets. Each motor coach was powered by two 275 hp Metropolitan-Vickers traction motors. In addition an all-electric relay multiple unit system was supplied by Metropolitan-Vickers for operation of longer trains under the control of a single driver. These trains set the standard for what later became the Southern Electric. The Waterloo to Wimbledon service via East Putney commenced electric operation in 1915 with the Shepperton and Hampton Court routes completed the following year.

1923 As a result of the grouping in 1923, the L&SWR lines became part of the Southern Railway.

Among the most significant achievements of the L&SWR were the electrification of suburban lines, the introduction of power signalling, the development of Southampton Docks, the rebuilding of Waterloo Station as one of the great stations of the world and the handling of the massive traffic involved in the First World War.

The LSWR locomotive engineers were:

The major locomotive classes of Robert Urie were continued and further developed by his successor on the Southern Railway, Richard Maunsell.

The LSWR's General Manager Sir Herbert Ashcombe Walker became the Manager of the Southern Railway; Walker himself was succeeded in the latter post by Major Gilbert Szlumper, formerly his assistant on the L&SWR.