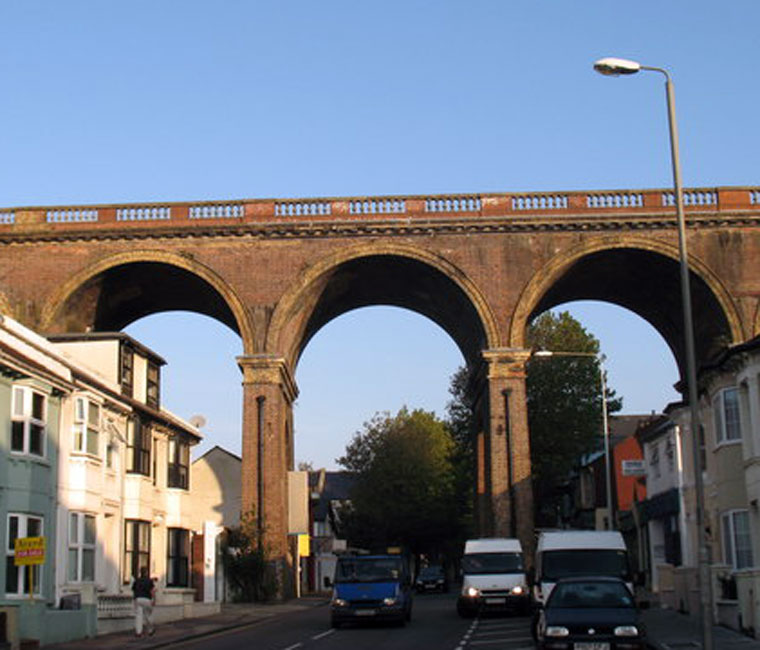 The London Road Viaduct is a brick railway viaduct in Brighton, part of the city of Brighton and Hove in East Sussex, England. It carries the East Coastway Line between Brighton and London Road railway stations.

Built in the 1840s for the Brighton, Lewes and Hastings Railway by the locomotive engineer and railway architect John Urpeth Rastrick, the sharply curving structure has 27 arches and about 10 million bricks. It is still in constant use, and is listed at Grade II* for its historical and architectural significance.

The line to Shoreham-by-Sea was completed first, in 1840, and the Brighton Main Line opened in its entirety in September 1841; but the route eastwards from Brighton towards Lewes was delayed until 8 June 1846.

A new company, the Brighton, Lewes and Hastings Railway company, was formed to build this line; John Urpeth Rastrick was employed as the surveyor and architect. The two companies and others amalgamated in July 1846 to form the London, Brighton and South Coast Railway.

In the 1840s, the land northeast of Brighton station was undeveloped, consisting of fields and lay in a steep-sided valley running from north to south, created by the River Wellesbourne (by then, reduced to an intermittently flowing, mostly underground winterbourne). Rastrick had to decide whether to cross this with an embankment or a viaduct.

Local opinion favoured an embankment, and he faced opposition and criticism when he chose to build a viaduct. Nevertheless, he planned a route for it, and laid the foundation stone on 29 May 1845. Construction took 10 months: the structure was ready on 28 March 1846, more than two months before the line to Lewes opened.

By the 1870s, dense terraced housing surrounded the viaduct stimulated by the opening of the railway.

Brighton's most significant bombing raid of the Second World War severely damaged London Road Viaduct. At 12.30pm on 25 May 1943, Focke-Wulf fighter-bomber aircraft dropped several bombs on Brighton, five of which landed on the railway. One demolished two arches and one pier at the west end of the viaduct, two arches west of the Preston Road span, leaving the tracks spanning the gap in mid-air. Despite this, a temporary repair allowed trains to start using the viaduct again within 24 hours; in less than a month, the service was back to normal. Until the arches were fully repaired in September 1943, however, a 15 mph speed restriction was enforced and Preston Road could be seen through the gaps between the sleepers where the brickwork had been blasted away. The replacement brickwork, darker than that of the main structure, can be seen from the road below.

The piers are thicker on the outside than on the inside because the viaduct is constructed on a sharp curve: trains reach the viaduct almost immediately after leaving the Brighton Main Line, and the line continues to curve away for several hundred metres. Of the 27 arches, 16 have a radius of curvature of 0.75 miles, and 11 have a radius of 0.125 miles.

Approximately 10 million bricks were needed to build the viaduct. The brickwork is red and brown, with yellow brick dressings. The wartime reconstruction used blue brick, a darker type often used for heavy-duty construction.

The 26 narrower arches are round-headed, whereas the wider span across Preston Road is elliptical. Each pier has a long, rectangular opening on each inner side, with rounded arches at the top and bottom. Running along the top of the viaduct on both sides is a balustrade with stone balusters.