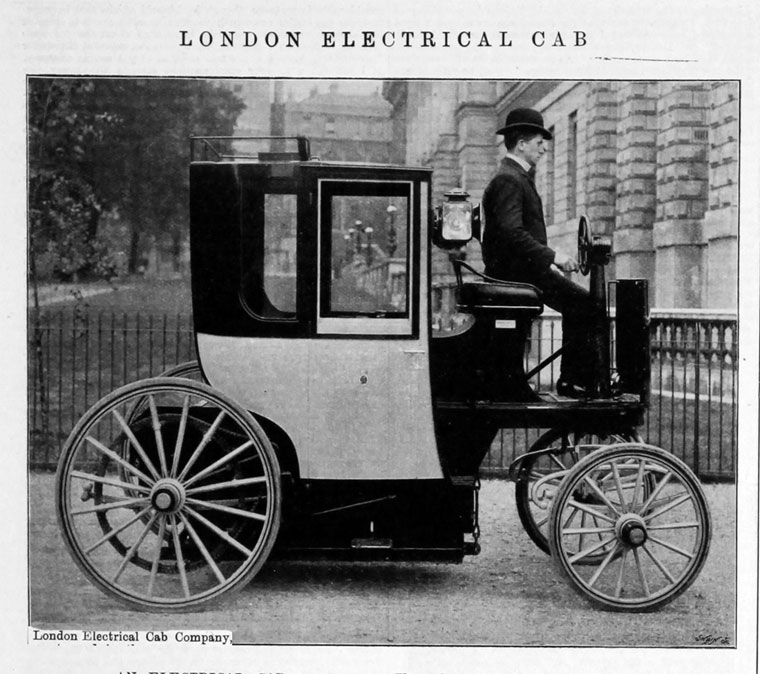 Sometimes referred to as the London Electric Cab Co.

The cabs were known as 'Hummingbirds' because of the noise they made and their colour of black and yellow. Twenty-four were built by the Great Horseless Carriage Co with bodies by Mulliners, and then fifty by the Gloucester Railway Carriage and Wagon Co.[1] Around eighty cabs were built.

1897 August 19th. 'The vehicle itself does not call for much description, and the motor is mounted under the driver's seat, and gets its supply from accumulators slung under the bottom the cab. It urged by the Company that accumulators have so readily deteriorated in tramway traction because they have been made too light and the discharge has been above the normal. Thus, in a tramway car, the accumulator constitutes only one-fourth of the total weight, while these cabs they make up one-half, being 14 cwt., while the cab with passengers weighs only 30 cwt. So that, even ascending the steepest of London gradients, there will be little more than the normal discharge. The batteries are of 40 E.P.S. traction type, of 170 ampere hours' capacity when discharging at the rate 30 amperes, and it has been ascertained by test that this is sufficient for running 50 miles — about day's work — although not continuously at the highest speed. The motor of three horse-power is of the Johnson-Lundell type, with double-wound armature and double-wound fields, and drives the wheels through an endless chain gear. A special controller is fixed whereby four variations of speed are possible — the first starting the motor, the second giving it a speed of three miles hour, the third seven miles hour, and the fourth of nine miles an hour.'[3]

1897 September. Schoolboy Stephen Kempton, age 9, dies in Stockmar Road, Hackney, after being caught in the cog wheels of the motor.[8]

1898 January 25th. Prospectus. Share capital £150,000. Directors are H. H. Mulliner; H. R. Paterson; Reginald Brougham; Evelyn Ellis and J. H. Mace. Consulting engineers are Kincaid, Waller and Manville. Company was formed in 1896 and the time has been spent in acquiring premises and fitting out. Mentions some cabs on the street (currently over 10,000 licensed Hanson's in the city). Have sole licence for the Johnson and Lundell Motors with Series Parallel Controller Patents.'[10]

Note
There is an interesting British Movietone News clip from 1896 showing a horseless carriage - might this be an electric vehicle as it doesn't look like other types? See [1]