Grace's Guide is the leading source of historical information on industry and manufacturing in Britain. This web publication contains 149,709 pages of information and 235,473 images on early companies, their products and the people who designed and built them. 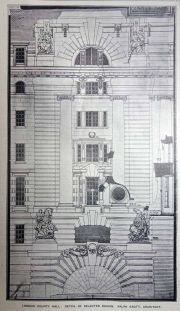 Headquarters of the London County Council

c.1890 The council established a committee to find a site for a new chamber for the Council and accompanying offices.

1896 The Committee recommended a site at Charing Cross, close to Trafalgar Square but this attracted criticism, such as in the letters column of The Times[1]

Pressure on space in the Council's rented offices increased; the organisation of the offices was far from ideal for its staff.

1905 The Committee had reduced the search for a new site to a choice of 2 - Adelphi and near Westminster Bridge; the latter was unanimously recommended to the main Council[2]

1908 After a competition for the design of the new County Hall, the architect whose design was chosen for the new building was Mr. Ralph Knott[3]

1908 Contract for the embankment of the river was awarded to Messrs Price and Reeves of Waterloo-place.

Having established the plans, it was then thought that if about two thirds of the building, including the Council Chamber, were completed this would give all the accommodation likely to be required for some time, so Messrs. Holloway Brothers, would be allowed to retain possession of the northern end of the site for as long as possible, and that the other part of the structure should be completed first.

1911 The first brick was put in position on the new structure.

By early 1912 part of the Council Chamber floor was in position. The King laid the foundation stone.

1912 It was decided to continue constructing the northern portion which would require extending the Embankment.

1915 Because of the war, it was not possible to set a date for occupation.