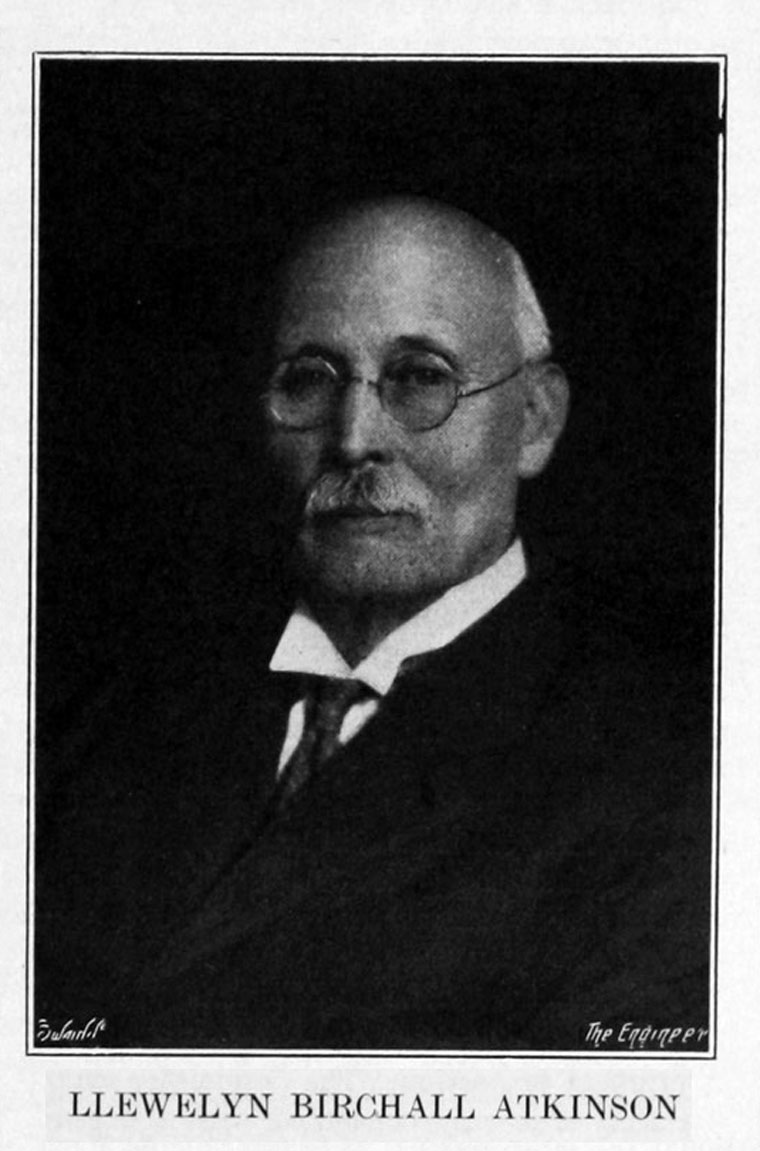 Llewelyn Birchall Atkinson (1863-1939), director of of Easton, Anderson and Goolden

The death of Mr. Llewelyn B. Atkinson on Wednesday, August 9th, removes from the electrical profession an exceptionally able man, whose work was widely appreciated. Few engineers have acquired greater popularity or have done more to foster progress. An admirable speaker, lecturer, and a prolific contributor to the Proceedings of the I.E.E. and other institutions, he became a well-known figure in the electrical world, and his death comes as a blow to many engineering and scientific people in this country and abroad. A more versatile man we have never known.

Although for many years he was mainly identified with cables, his knowledge of electrical engineering in general was considerable. There were few subjects relating to the industry he could not discuss. Even television claimed his attention in the early days when methods of making it practicable were being sought. His innumerable contributions to discussions, speeches, and lectures would fill volumes. As recently as last June he delivered at the Institution of Electrical Engineers' Overseas Members' Conversazione an excellent lecture on "Institution Recollections," when he appeared to be in the best of health and spirits. The services he rendered to that Institution, of which he became President in 1920, were of immense value. He had the happy knack of putting life into meetings and of showing others how papers should be discussed.

Born on August 27th, 1863, the son of a civil engineer, Mr. Atkinson was first educated at the Merchant Taylors' School, London, where his early scientific knowledge was gained in classes and laboratories, set apart for the study of chemistry, physics, and geology. He also attended the evening classes, then just beginning, under Professor Ayrton at the Finsbury Schools, which subsequently became the Finsbury Technical College, where in 1881 he obtained the Silver Medal with Honours at the first examination held by the City and Guilds on electric lighting and power transmission.

After leaving the Merchant Taylors' School, he entered the Department of Applied Sciences at King's College, where in the first year he was awarded the Sambroke Exhibition Medal and in the second and third years the Jelf Medal, awarded to the student who most distinguished himself.

On leaving King's College, of which he was elected an Associate, Mr. Atkinson entered the works of Kitson and Co., of Leeds, where he gained a good knowledge of the working of a large engineering factory.

In 1884 he entered the Halifax works of Goolden and Trotter and Co., as a pupil, and was subsequently engaged by the firm as an engineer. Later, he became a partner.

In 1894, the firm having outgrown the capacity of its works, was amalgamated with Easton and Anderson, of London and Erith, under the title of Easton, Anderson and Goolden, Ltd., and Mr. Atkinson was elected a director of the new company. He also carried on a consulting practice, and was connected with several companies, manufacturing engineering and electrical specialities.

In Conjunction with his brother, Mr. C. W. Atkinson, he took a prominent part in the introduction of electric power to mining, particularly coal mining, and was the inventor and patentee of various mining electrical appliances. With his brother he owned at Cardiff testing works equipped with electrical, mechanical and chemical laboratories.

In 1883 he entered as a student the Institution of Civil Engineers and was awarded a Miller Prize for a paper on electrical measuring. instruments, in which was published for the first time a method of measuring the power in an A.C. circuit by means of two quadrant electrometers with the needles mechanically connected. In 1900 he was joint author with his brother of a paper read before the Institution of Civil Engineers on electric mining machinery, for which two Telford Medals and Premiums were awarded to the authors. This paper was republished in America, France, and Belgium. With his brother be was also joint author of a paper read before the Mining Institute of Scotland on applications of electric1ty in mining; also of a paper on a similar subject read before the Staffordshire Institute of Mining Engineers and the South Wales Institute of Engineers, of which he was a member.

In 1886 he took out his first patent for a dynamo brush composed of metal strips interleaved with resistance members for the purpose of preventing sparking, a design which was revived many years later by Mr. W. M. Mordey in a paper he read before the I.E.E.

One of Mr. Atkinson's first jobs at the Halifax works was to design in conjunction with Mr. W. H. Ravenshaw a 6 H.P. motor to be built into a bar type coal cutting machine. This is said to have been the first electric coal cutter, and the capabilities of the electric drive were demonstrated as soon as it was set to work. The development of this machine led to his spending a good deal of his time at the coal face.

One of his early experiments, made about 1888, was that of trying to run a laminated field motor with A.C. A motor developed by him as the result of this experiment had in its simplest form two pairs of short-circuited brushes on the commutator with their axes at right angles to one another and the field system connected to the supply. The machine was described in a paper, for which Mr. Atkinson was awarded a Telford Premium, on "The Theory and Working of A.C. Motors," read before the Institution of Civil Engineers in 1898. The motor had shunt characteristics and formed the basis of other designs. At one time he advocated single-phase railway electrification, but whether the advent of mercury arc rectifiers changed his views we do not know.

Although Mr. Atkinson attained a high position on the technical side of the industry, he always had a strong bent towards the commercial side and, like many other technical men, he drifted in later years in that direction, marking a new epoch in his career. In conjunction with the late Mr. P. J. Fawcus he founded the Trafford Park Power and Light Supply Company, said to be the first company formed in this country with the primary object of distributing cheap power over an industrial area. For many years he was a director of that company, which about 1920 was absorbed by the Stretford Urban District Council.

One of the electrical firms that built a factory at Trafford Park was that of W. T. Glover, and when that firm was reorganised in 1903 Mr. Atkinson became a director, a post which he held for about seventeen years, being for the greater part of that time in charge of the company's London office. From the time he joined the board of Glover and Co., Ltd., he had taken a prominent part in the affairs of the Cable Makers' Association, being at one time its Chairman. His exceptional abilities were therefore familiar to his associates, and on the death of Mr. A. H. Howard he was invited by his colleagues in the cable making industry to become the Secretary and Manager of the Association. Subsequently he became Director, retiring in 1936. He was also Chairman of the Joint Industrial Council of the Cable Making Industry, a member of the Wiring Rules Committee, and a past Chairman of the Royal Society of Arts.

In research he took a keen interest. From February 12th, 1926, to February, 1927, he was President of the British Electrical and Allied Industries Association. No one has served that Association better, and his remarks at the conclusion of his Presidential Address are characteristic of his zeal. Appealing for help, he said: "Any Government, any industrial leaders, who fail to see that research by Englishmen can accomplish any and every result, convict themselves of blindness, to lack of knowledge, and to lack of imagination. Research associations and research workers are not asking for charity; they are urging that the present squalid civilisation should be replaced, as it can be, by a far better one, if applied knowledge in every sphere is encouraged and developed, that instead of being a last charge upon the resources of the nation, research should be the first charge. We urge that the Press should make it part of its daily duty to inform its readers, in suitable but accurate terms, of the advances in knowledge that have been made, and are being made, of the progress that is possible, and of the immense economic advantage that must accrue and thus use its influence in creating an atmosphere driving Governments to action."

Mr. Atkinson never tired of relating his reminiscences and had many stories to tell of pioneer electrical engineers, most of whom he knew personally. Like the late, Sir Thomas Callender he enjoyed speaking of the early difficulties the pioneers had in getting permission to lay electrical light cables, and how they used to lay them with out permission. When once they had been laid no one seemed to have had the power to make them take them up again. At the I.E.E. Commemoration meeting held in 1922 in celebration of the Institution's fiftieth year of existence, he was one of the most entertaining speakers. For the pioneers he displayed great admiration. Many of them, he said, were untrained men, or at any rate they had no training in the ordinary sense of the word. Thomas Parker was believed to have been in turn an ironmoulder, travelling showman, mesmerist, and finally an electrician.

To book writing he never seems to have turned his attention, but had he done so no one was better fitted to survey the industry's growth. From the early days of the dynamo and Jablochkoff candle he saw it expand to its present dimension. That he was a great asset to the electrical industry, everyone who knew him will readily admit, and his passing will be deeply regretted by a wide circle of fellow-workers and friends.