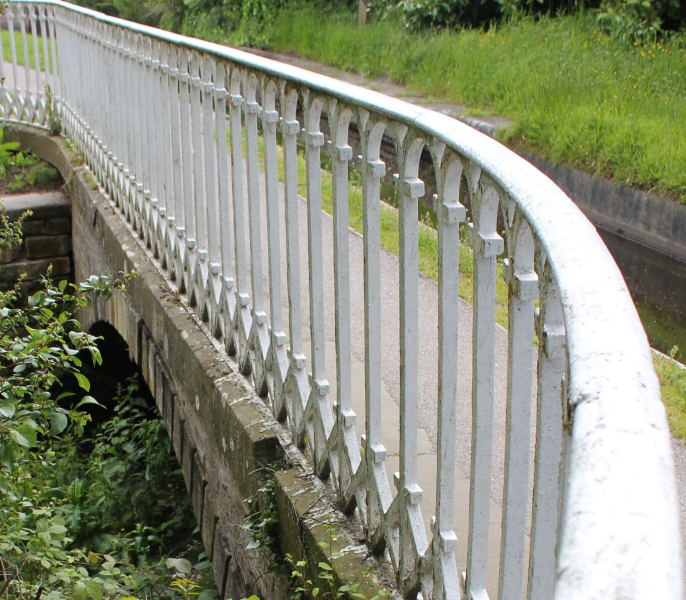 on the Montgomeryshire Canal in Welshpool, Powys

This cast iron aqueduct was built in 1836 to carry the canal over the Lledan Brook. The responsible engineer was James Sword, who followed his predecessor, George Watson Buck in adopting a duct assembled from cast iron plates bolted together. Like Buck’s Brithdir Aqueduct, the side plates have broad, flared webs for lateral stability. However, Sword opted for a narrower channel, and supported the whole trough on cast iron I-section beams. The towpath is carried on an immediately adjacent arched bridge, with a similar structure built on the opposite side. In this respect there is a superficial resemblance to the Tone Aqueduct in Somerset, although the Tone Aqueduct's masonry arches contribute to supporting the iron duct. Stalybridge Aqueduct also has its towpath on an adjacent masonry aqueduct, and this was later utilised to provide additional support to the mid span of the trough.

Stephen Hughes's excellent 'The Archaeology of the Montgomeryshire Canal'[1] includes some fine drawings of this aqueduct. The author also points out the close resemblance between the cast iron railings on this aqueduct and those on some other aqueducts (Congleton, Stretton, and Nantwich). Those aqueducts were the responsibility of Thomas Telford, and were cast by William Hazledine.