Showing how the sections of the 'pierced' arch ribs are joined to each other and to the transverse diaphragm plates. Above the arch ribs can be seen the more delicate spandrel castings (see next photo)

Transverse tie bars pass through the spandrel castings. In fact what we see here is probably a hollow sleeve with flanged ends (i.e. a cast iron pipe) through which the wrought iron tie bar passes

Another view of the connection between ribs and diaphragms. Also note the X-braced plates (lattice cross plates) which sit on top of the arch ribs 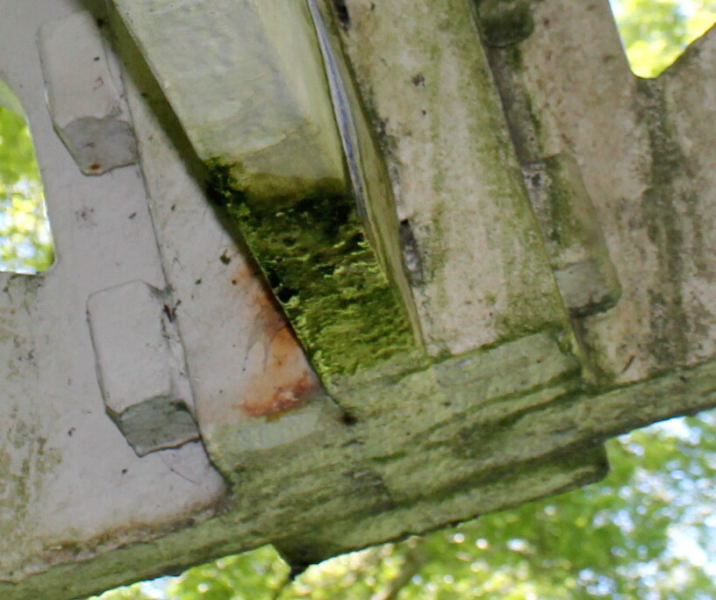 Enlarged detail from the above photo, which does not wholly succeed in showing the construction. However, the flanged ends of the rib castings are L-shaped, while the end of the diaphragm plate is T-shaped

This and the following two photos show the cruciform section diagonal braces, together with the round section transverse tie bars

Note the close fit at the joint between the lattice cross plates. This would have been achieved thanks to the availability of large planing machines at the time of construction 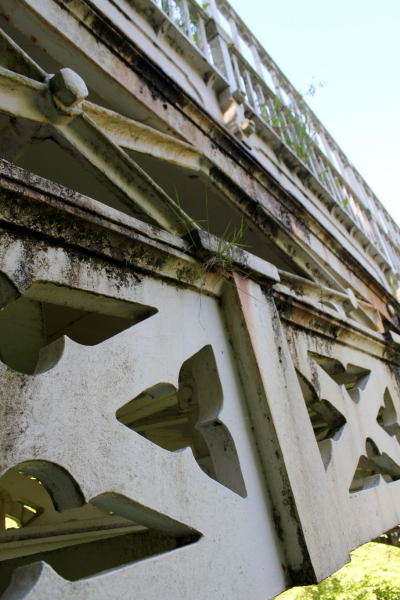 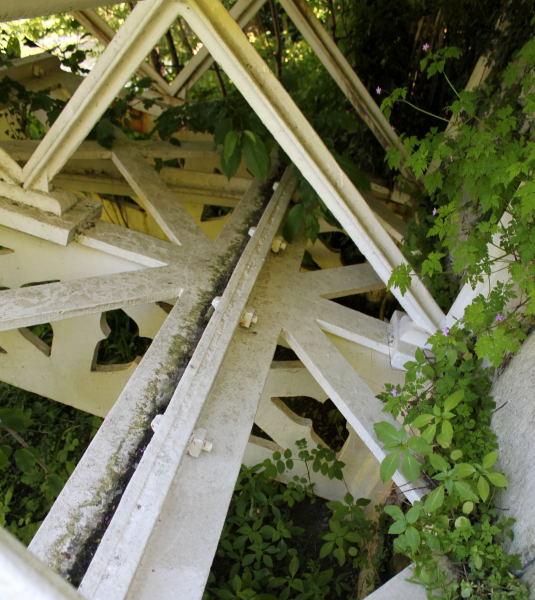 Looking down to where the arch ribs spring from the masonry abutments. This also shows how the lattice cross plates are bolted together (with some infilling material in the joint), and how the spandrel castings locate on these plates 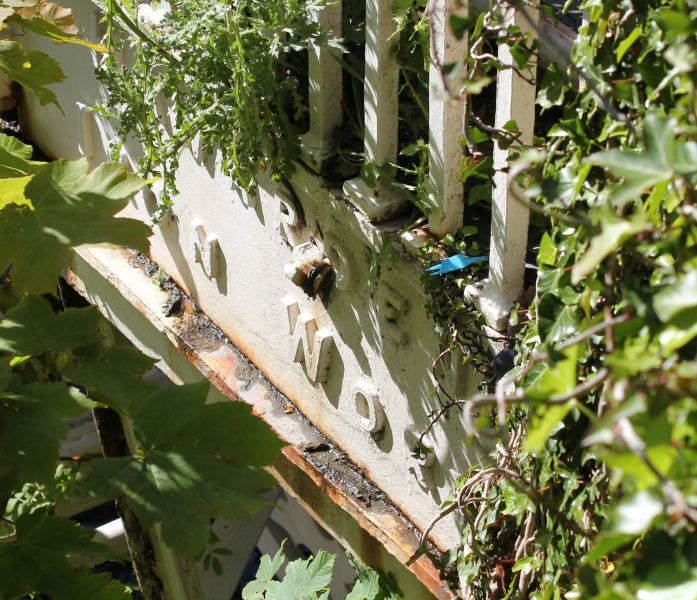 Looking towards the A470 and the statue of David Davies

The bridge carries a minor road across the River Severn, between Newtown and Llanidloes. The bridge is very close to the A470 in Llandinam, but is doubtless unobserved by most passing motorists.

A good description of the bridge may be found here.

The bridge was built in 1846; it was one of the first iron bridges in the county. Local contractor David Davies (1818-90) constructed the foundations and approaches; the bridge was to the design of Thomas Penson. The ironwork was produced by the Hawarden Iron Works, and Edward Jones of Gellidywyll constructed the masonry abutments. A statue of Davies stands at the east end of the bridge.

The elegant design of the bridge owes much to the earlier work of Thomas Telford and William Hazledine. In fact it closely echoes a number of Telford's large iron bridges, as first seen at Craigellachie. The similarities of design and construction can be studied by comparing the photos of Llandinam and Mythe Bridge.

Llandinam bridge was neither 'state of the art' in 1846, nor a model of economic construction, but the detail design is clearly the work of a highly competent draughtsman. The quality of the foundrywork and of other visible aspects of construction is impressive. However, the tendency to favour sharp internal and external corners for the castings would later be frowned upon, although they were typical of the era.

The bridge appears not to have undergone much alteration, no doubt helped by the 3 ton weight restriction. As such, it provides a rare opportunity to study an iron bridge of the 'Telford/Hazledine' type in its original form. The larger Mythe bridge is another fine example of this type, although access for viewing is not so good, and it has undergone some modifications to the deck and to some of the spandrel castings.

There are two other large iron bridges in the locality for which Thomas Penson was responsible, Caerhowel Bridge and Abermule Bridge.

The key elements of this very rigid structure are described below and shown in the photographs.

Each of the three arch ribs is assembled from five iron castings, bolted together, with transverse plates (diaphragms) sandwiched between the mating ends of the five castings.

On top of the arch is fixed a series of lattice cross plates. These cover the full width and are all bolted together via flanges at their long edges. These plates do not continue over the whole span of the arch. It appears that towards the crown of the arch, their role is taken over by unpierced plates which constitute basis of the deck.

Above the arch ribs are the cast iron spandrel struts, which support the deck. They are of slender cruciform section. Above these are the deck bearers, slender shallow cast iron beams. Although not readily apparent, the various spandrel castings will have tenons which engage in mortices at the top of the arch ribs and the underside of the deck bearers. These would be a loose fit, to be filled on assembly with packers and lead or 'rust cement'.

The deck is probably assembled from cast iron plates, joined at their four edges by bolted flanges. These plates will be connected to the deck beams by mortices protruding from the top of the deck beams engaging with sockets in the plates. The iron railings and kicking strips are bolted to the deck plates.

Returning to the arch ribs and spandrels, additional rigidity is provided by tie bars and by diagonal bracing.

Penson's Caerhowel Bridge, built 12 years later, has two spans which bear a superficial resemblance to those at Llandinam. However, the design has been simplified to allow more economical construction.

The bronze statue of David Davies, a self-made engineer, industrialist, entrepreneur and later the Liberal Member of Parliament for Cardigan, was designed in 1890-93 by the sculptor Alfred Gilbert and cast by George Broad and Sons of London. This was the second of two statues - the first stands outside the Board Offices of Barry Docks, Glamorgan. That one takes the form of a standing bronze figure of David Davies in workaday clothes, his left foot forward, studying a plan for the dock and railway development at Barry. The figure stands on a high square plinth of limestone, with a wide cornice of granite. On one side is the inscription: "DAVID DAVIES BORN 1818. DIED 1890. ERECTED BY PUBLIC SUBSCRIPTION."


The Llandinam statue was erected in 1893 beside the bridge that was his first important success, in the parish of his birth.