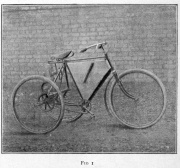 Both the partners, C. M. Linley and J. Biggs, were cycle engineers of repute; they had invented the Whippet, probably the best spring frame the cycling world has ever known; on the staff were William Chater-Lea, later to make a name for himself in another branch of the trade; J. G. H. Browne, who, a few years later, left to start building "North Road" cycles, in Goswell Road; J. A. Poole, inventor of the expanding stem method of handlebar adjustment and others.

1884 Patent. Charles Montague Linley and John Biggs, both of Southwark, engineers and George Grainger Tandy, of Clapham, surgeon for 'improvements in Velocipedes'.[1]

1890 Jan/Feb. The Stanley Exhibition of Cycles at the Crystal Palace. 'The Whippet'. Illustrated.

1896 Company wound up. '...That it is desirable that the undertaking, business and assets (except outstanding debts and liabilities) of Linley and Biggs Limited (hereinafter called 'the Company'), should be sold to and taken over by the Whippet Cycle Syndicate Limited, which has been formed and incorporated for the purpose (inter alia) of acquiring and carrying on the same, and that, with a view thereto, the Company be wound up voluntarily, and that Mr. John Archer, of 84 Rossiter-road, Balham in the county of Surrey, Mercantile Clerk, be appointed Liquidator of the Company for the purpose of such winding-up, and that an Agreement for sale and purchase dated the 10th day of September 1896, and made between the Company of the first part, the Protean Variable Gear Syndicate, Limited, of the second part, Charles Montague Linley of the third part, John Biggs of the fourth part, John Archer of the fifth part, and the Whippet Cycle Syndicate Limited, of the sixth part, be approved, and that the Liquidator of the Company be authorized, pursuant to section 161 of the Companies Act, 1862 to adopt the said Agreement and carry it into effect, with such (if any) modifications as he may think fit, and the Whippet Cycle Syndicate, Limited, may be willing to accept...'[2]