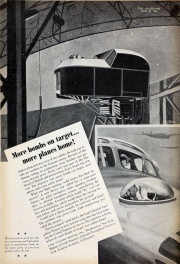 Founded and headed by Ed Link.

1934 the Army Air Corps placed the first order for the Link trainer because it was experiencing loss of pilots, especially during adverse weather, when it began to carry U.S. Air Mail.

The term Link Trainer, also known as the "Blue box" and "Pilot Trainer", is commonly used to refer to a series of flight simulators produced between the early 1930s and early 1950s by the Link Aviation Devices, Inc.[2]

The company expanded rapidly throughout the 1930s

By World War II the ANT-18 Basic Instrument Trainer, known to tens of thousands of fledging pilots as the "Blue Box", became standard equipment at every air training school in the United States and allied nations. In fact, during the war years Link produced more than 10,000 Blue Boxes, turning one out every 45 minutes.

The World War II era also marked Link Aviation’s creation of the first synthetic visual systems, used initially on the Celestial Navigation Trainer (CNT). At the top of a 40-foot silo, a planetarium-like dome allowed a bomber aircraft navigator to use a sextant to shoot an array of 379 accurately positioned light-point stars. Below and forward, a reproduction of terrain flashed on a movie screen for practice in identifying landmarks during simulated daylight flight. The CNT also represented the first classified simulation program, incorporating the then-secret Norden bombsight.

By 1969 was the Link Division of Singer-General Precision Inc of USA. Link was the largest producer of flight simulators in the Western World[3]