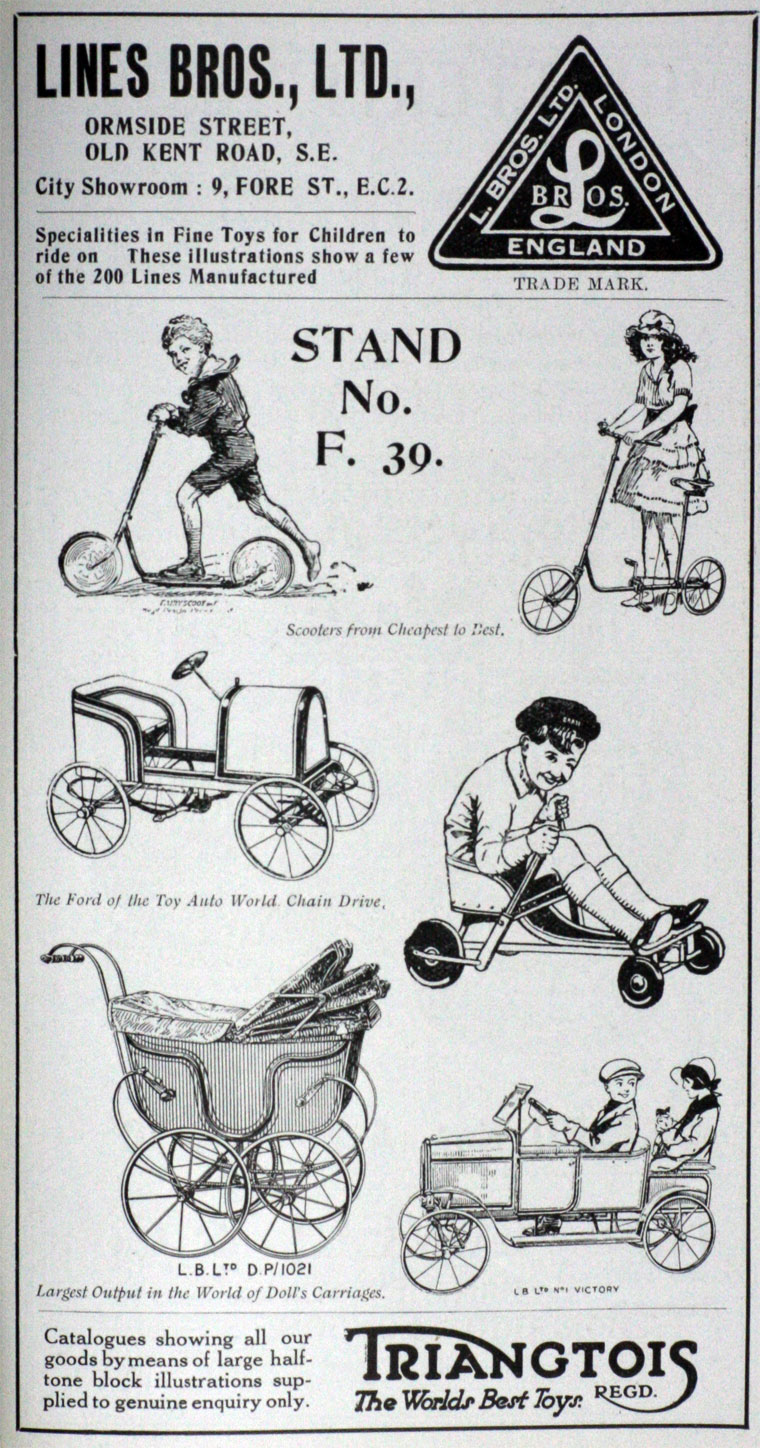 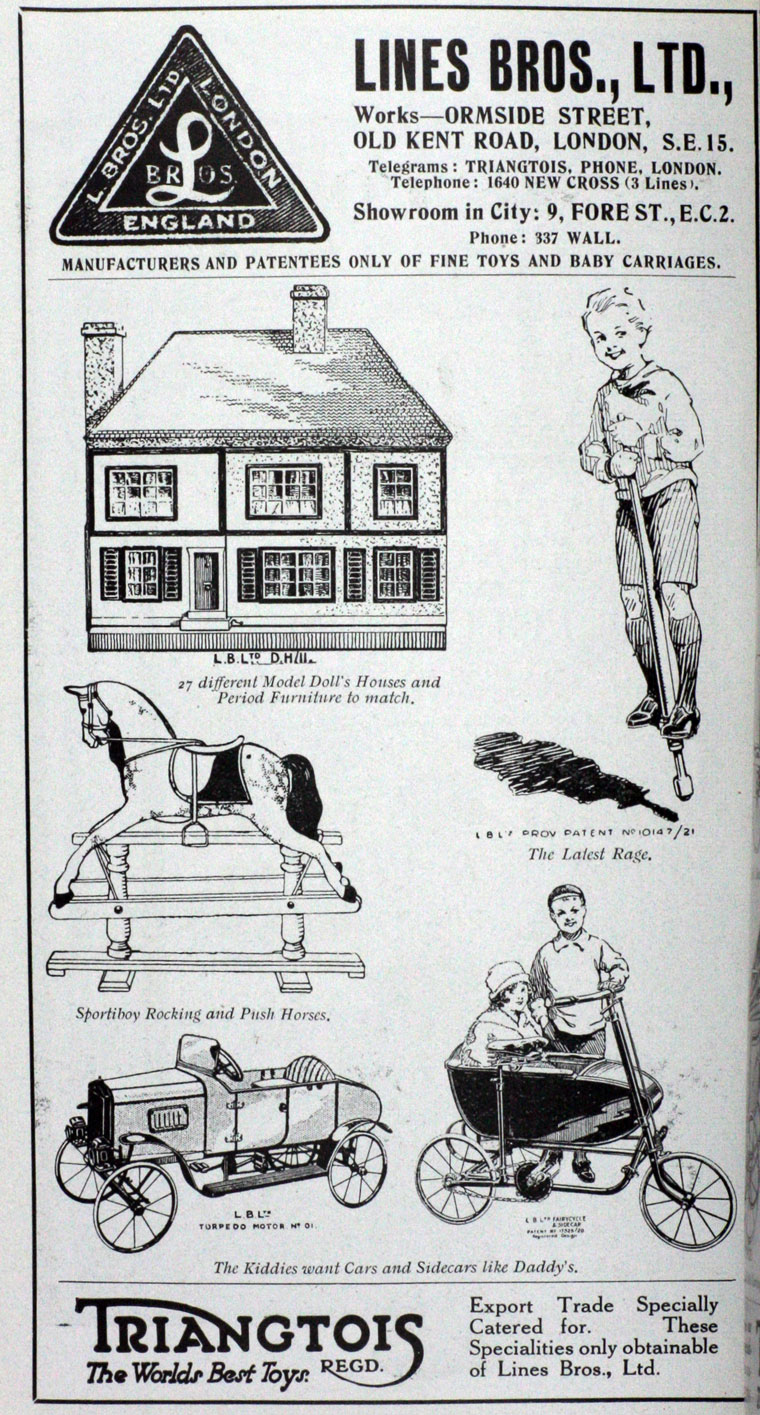 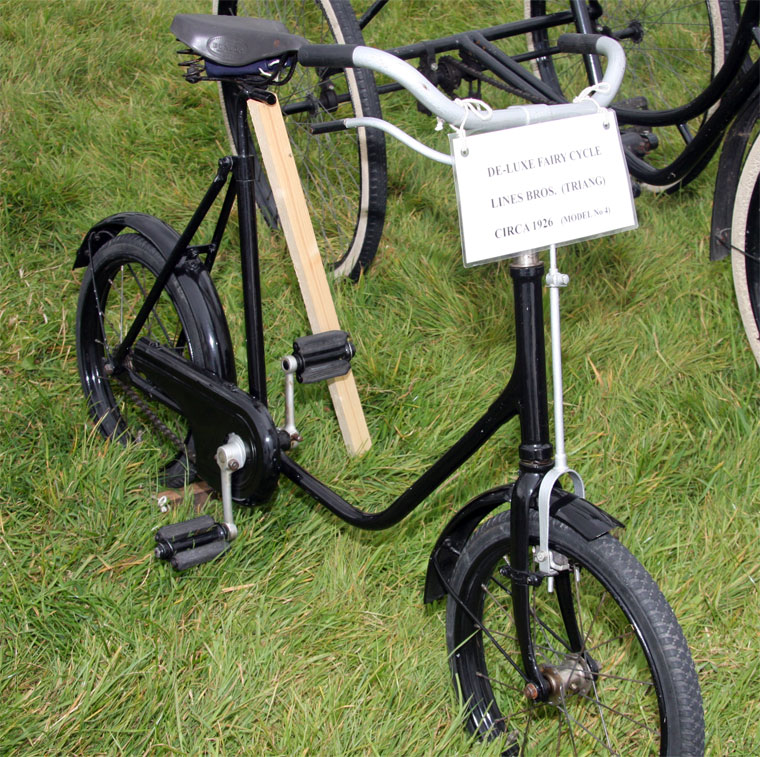 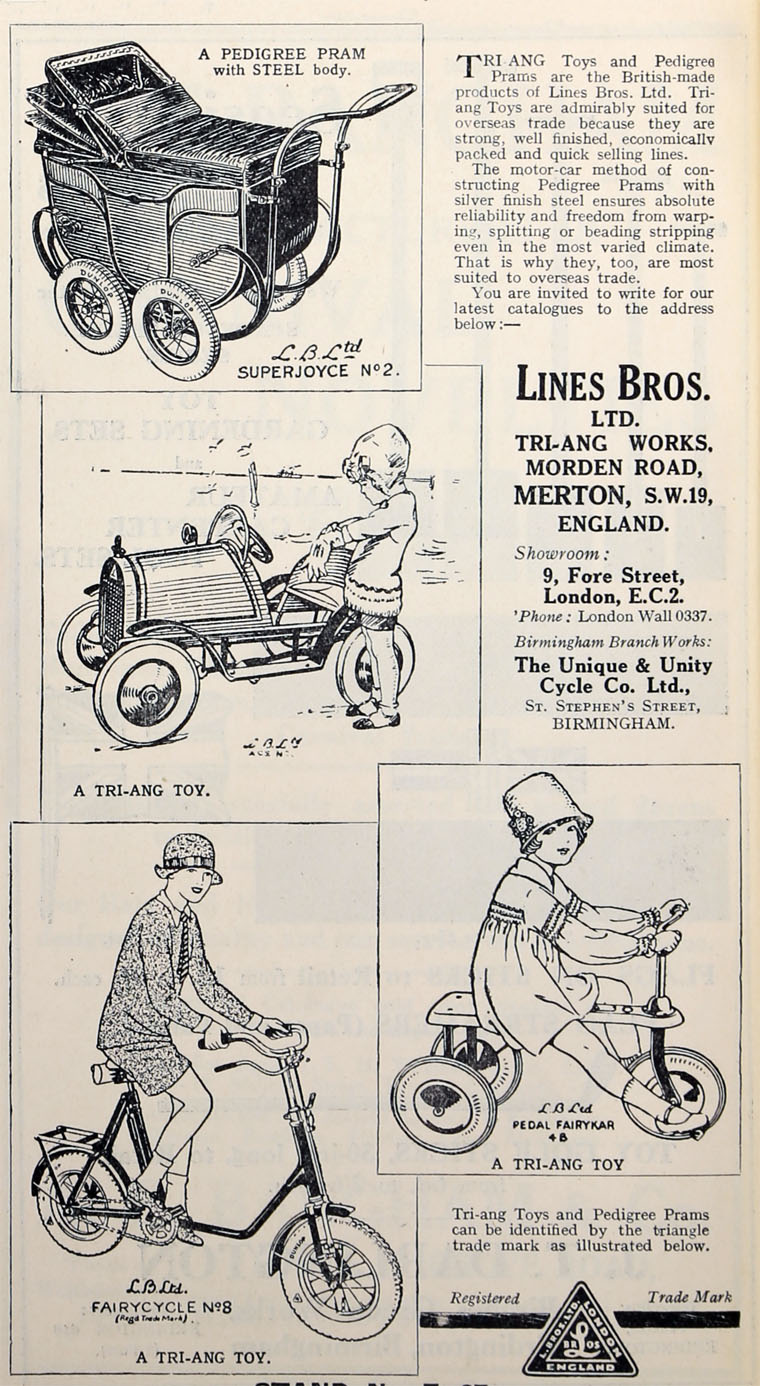 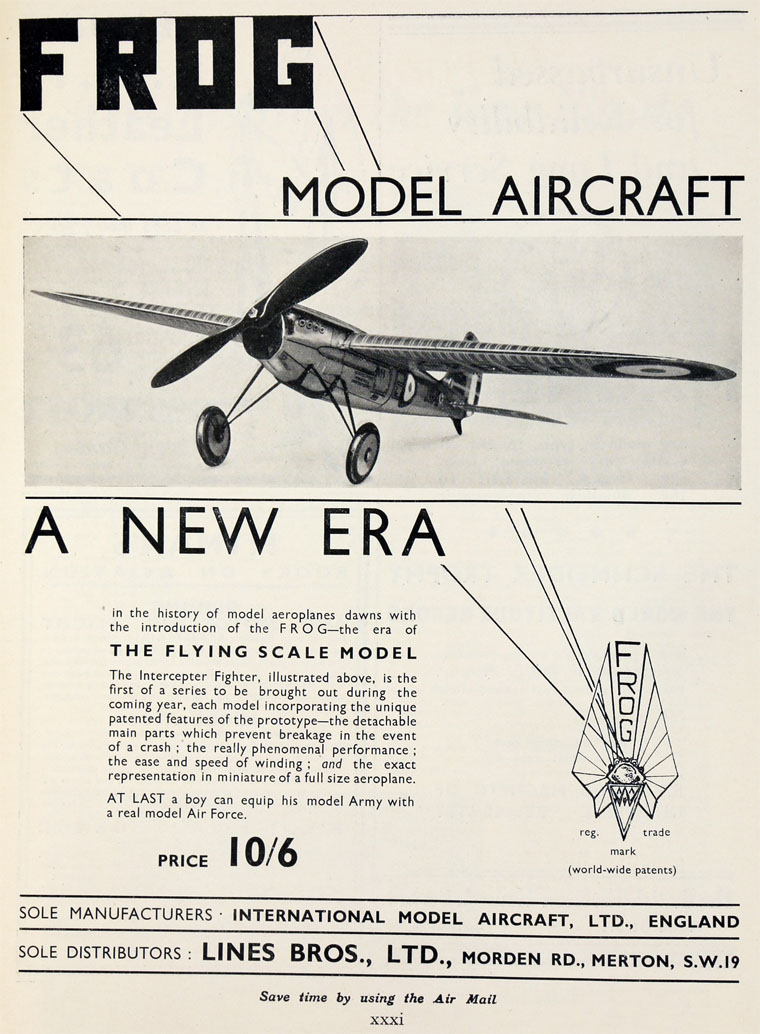 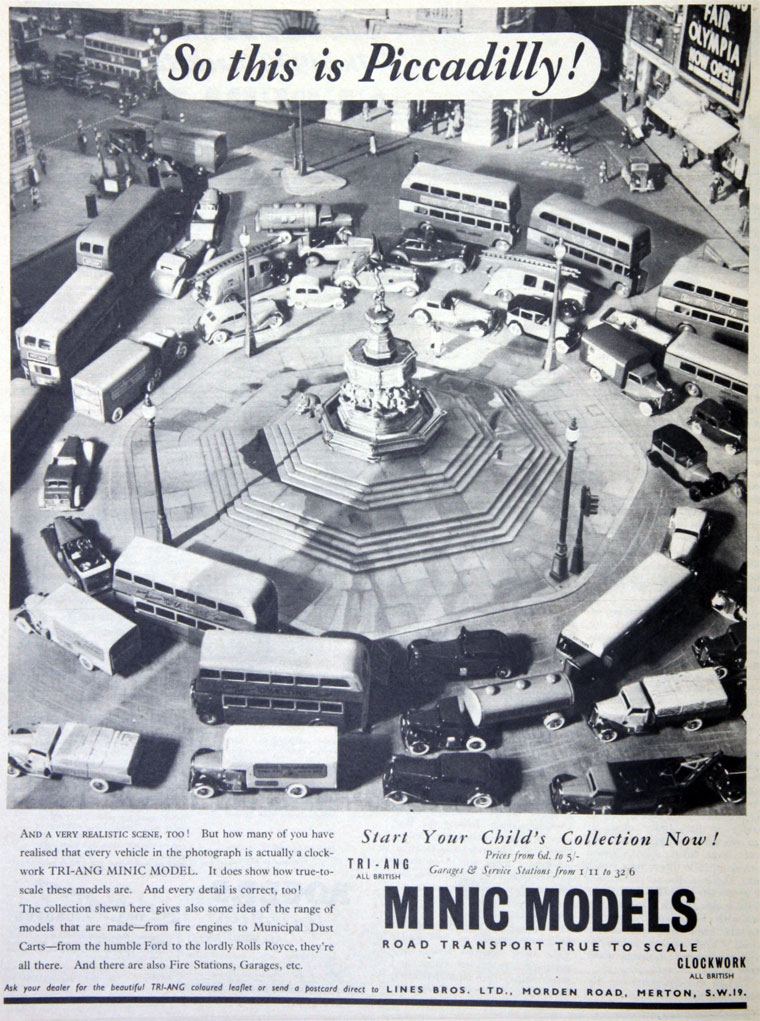 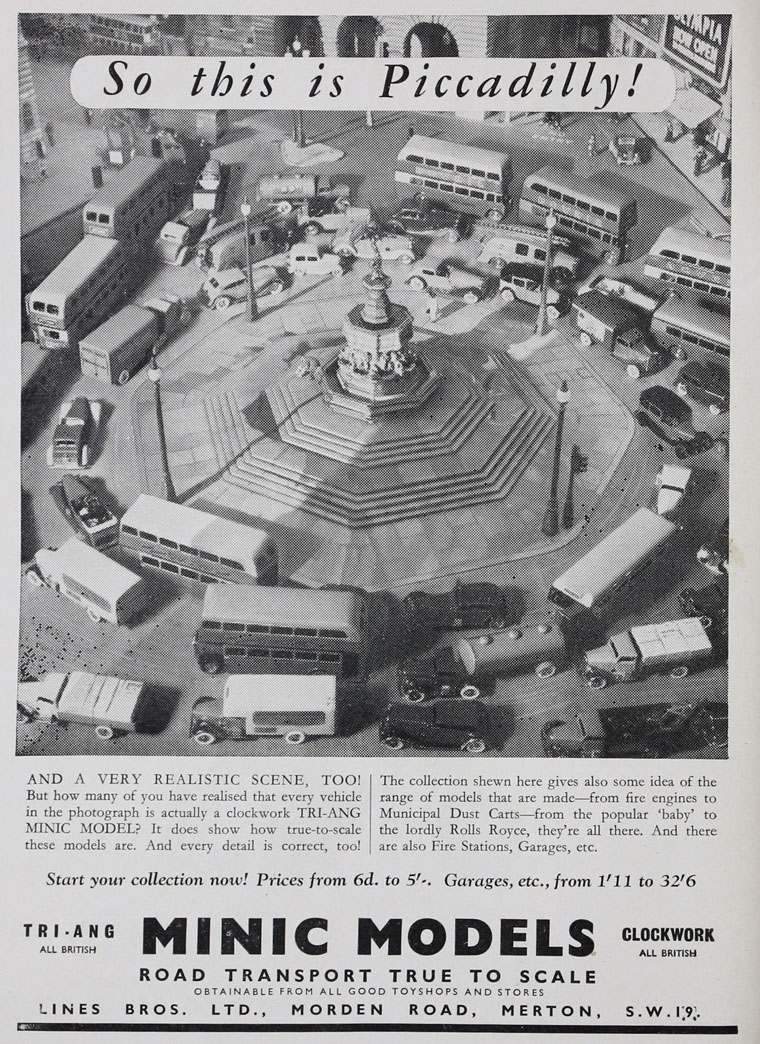 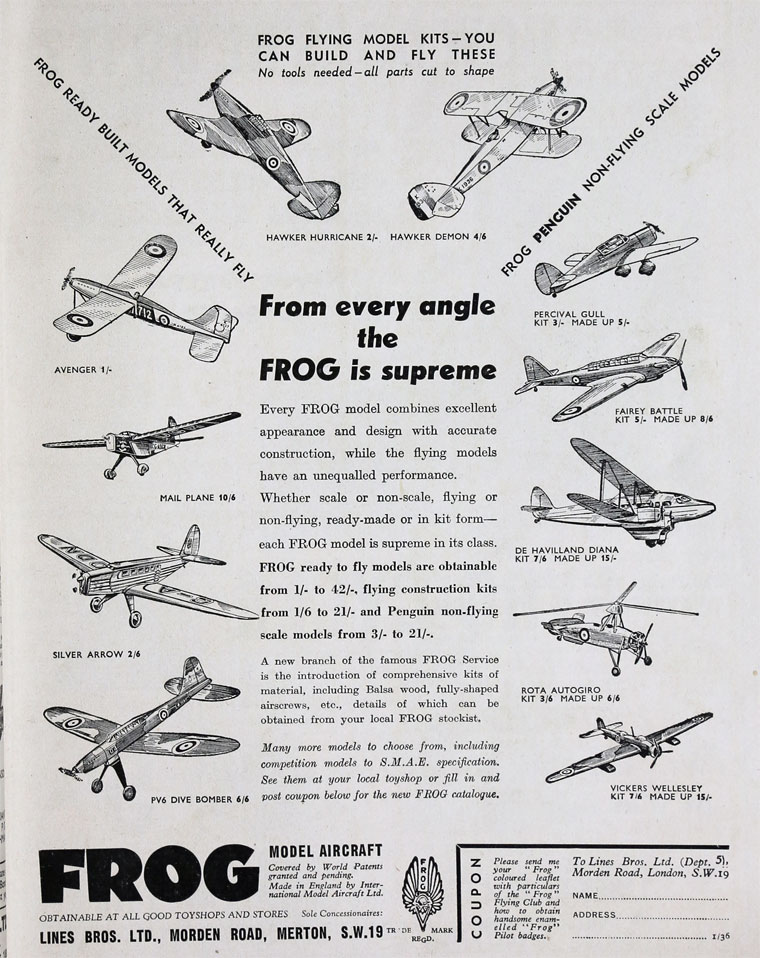 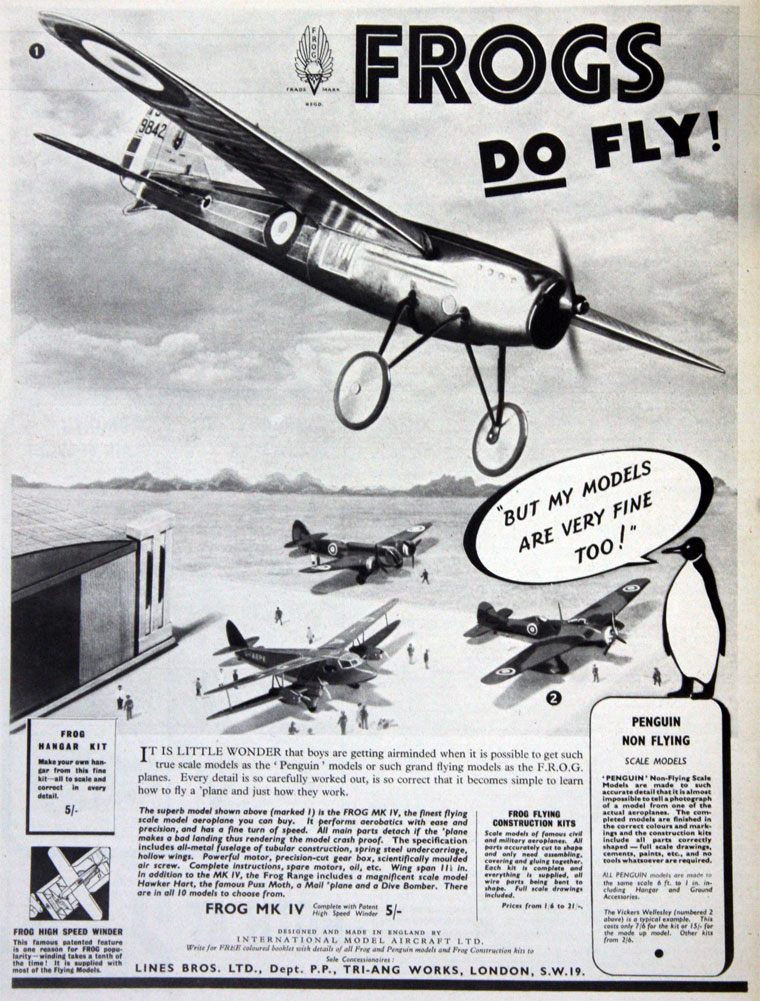 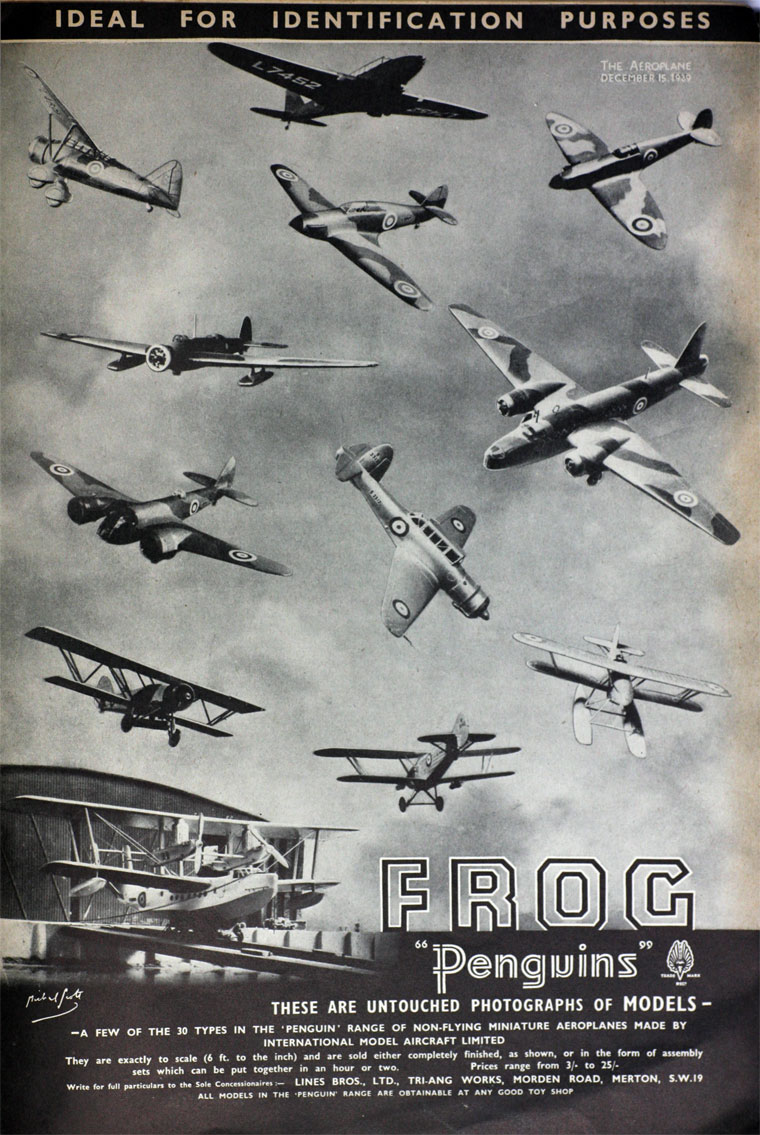 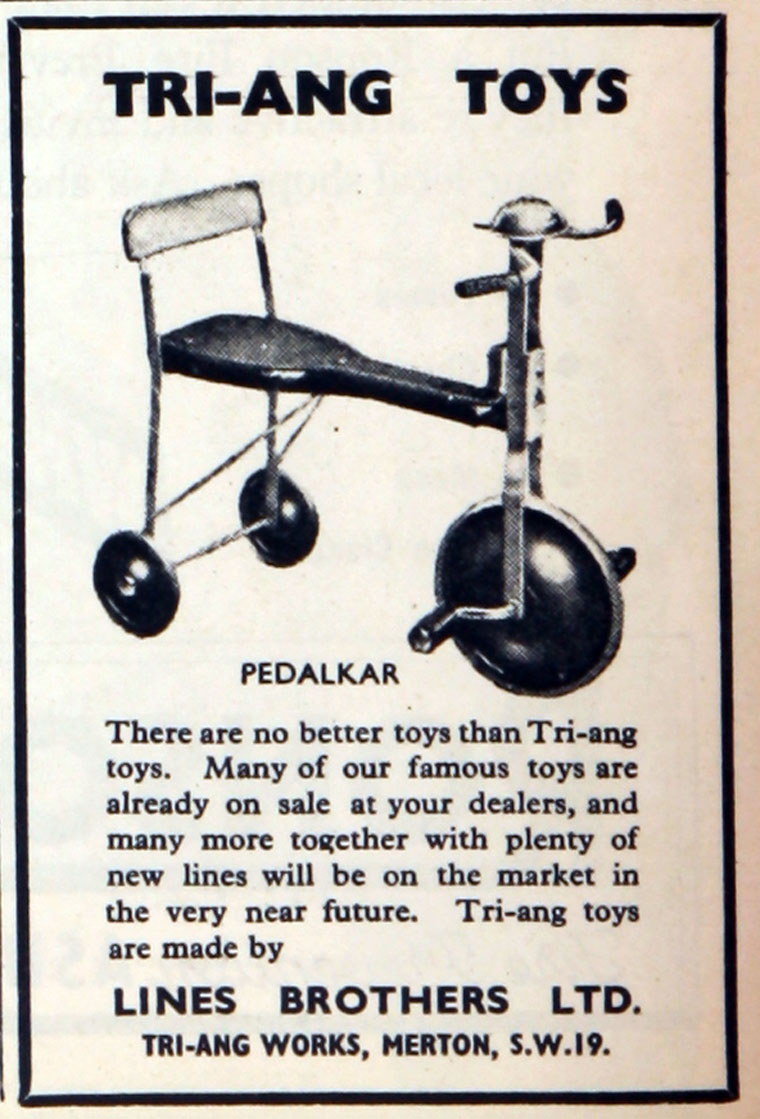 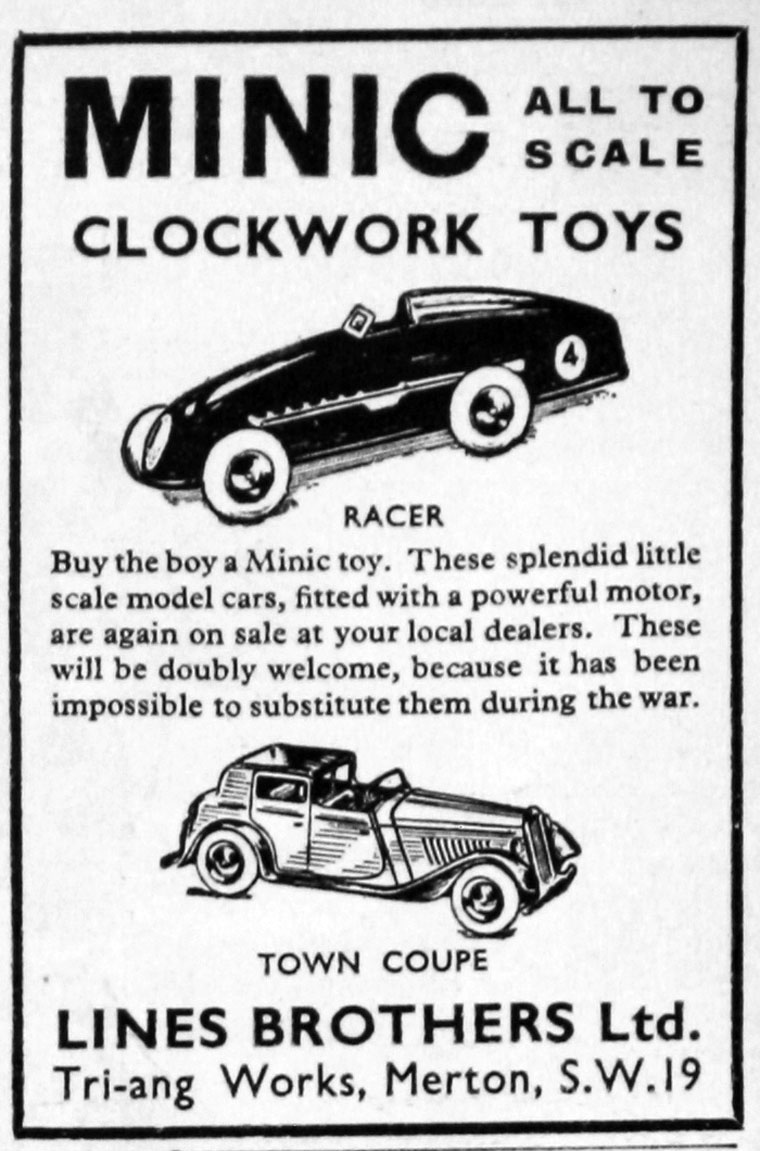 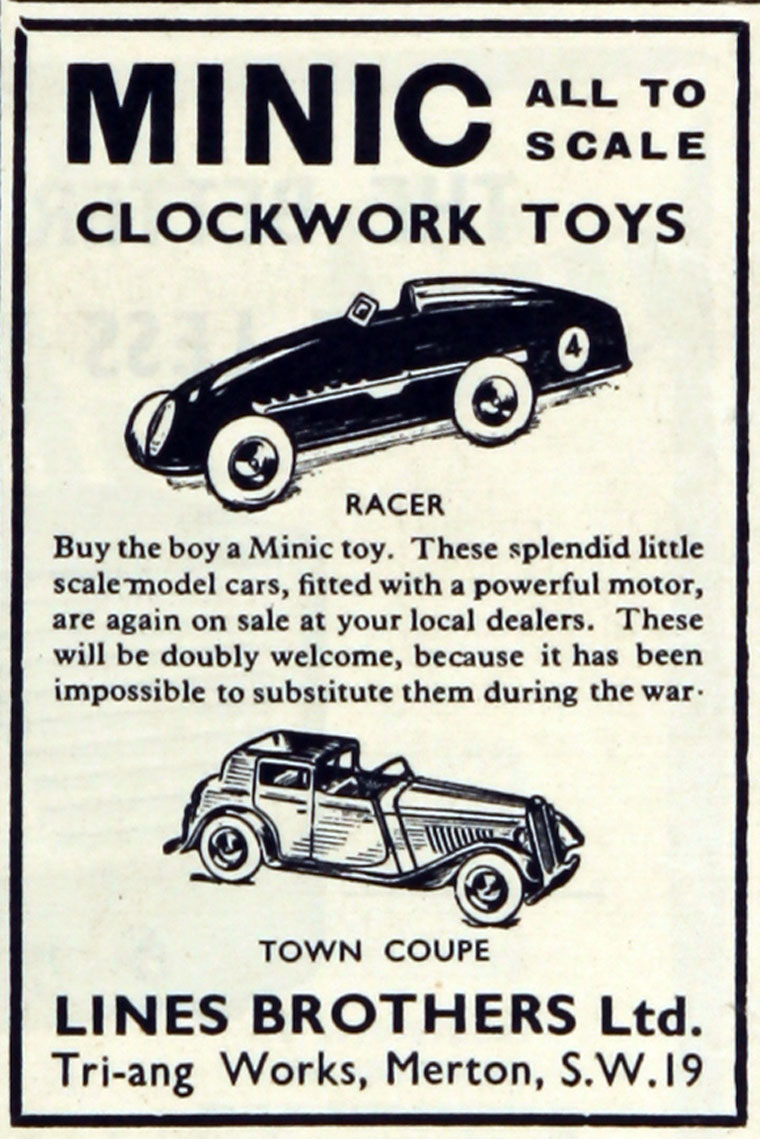 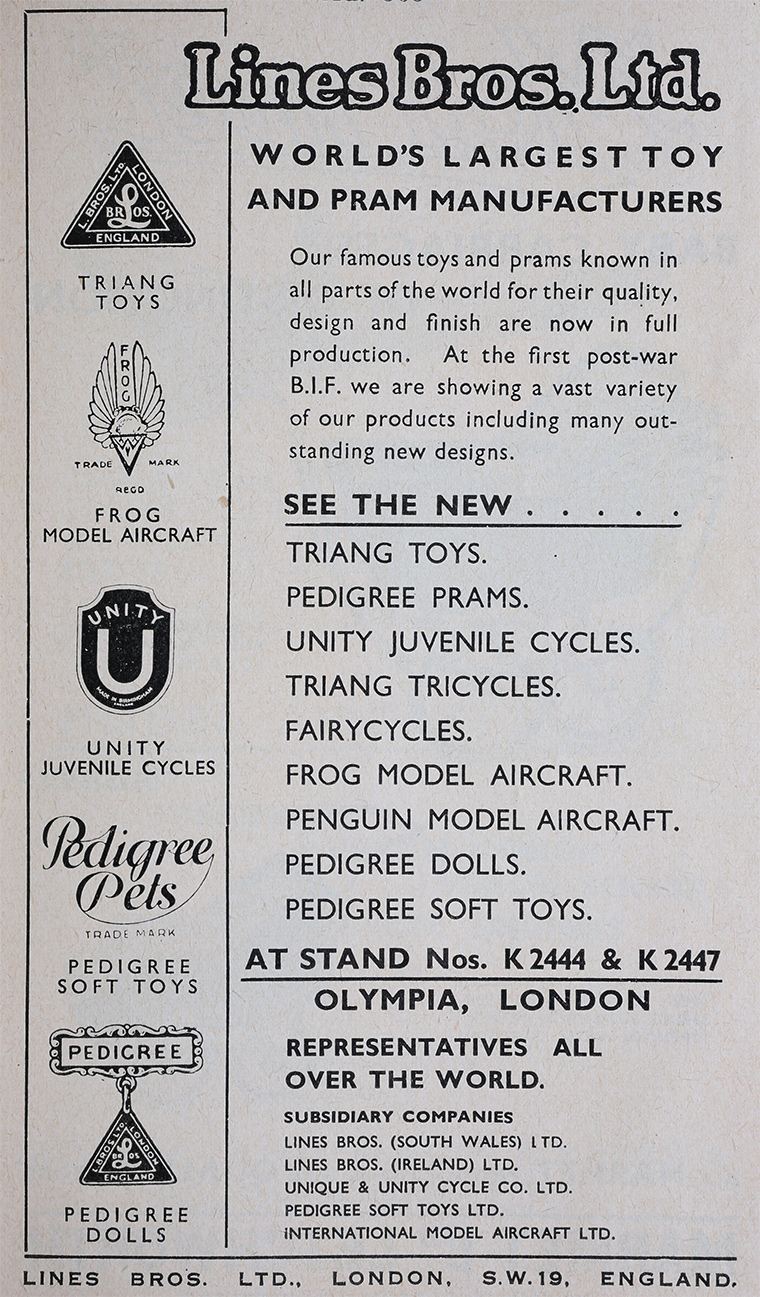 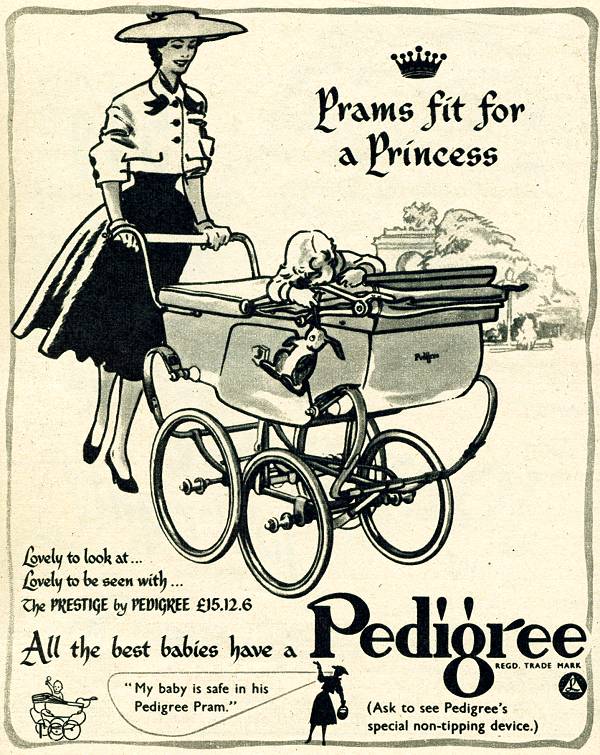 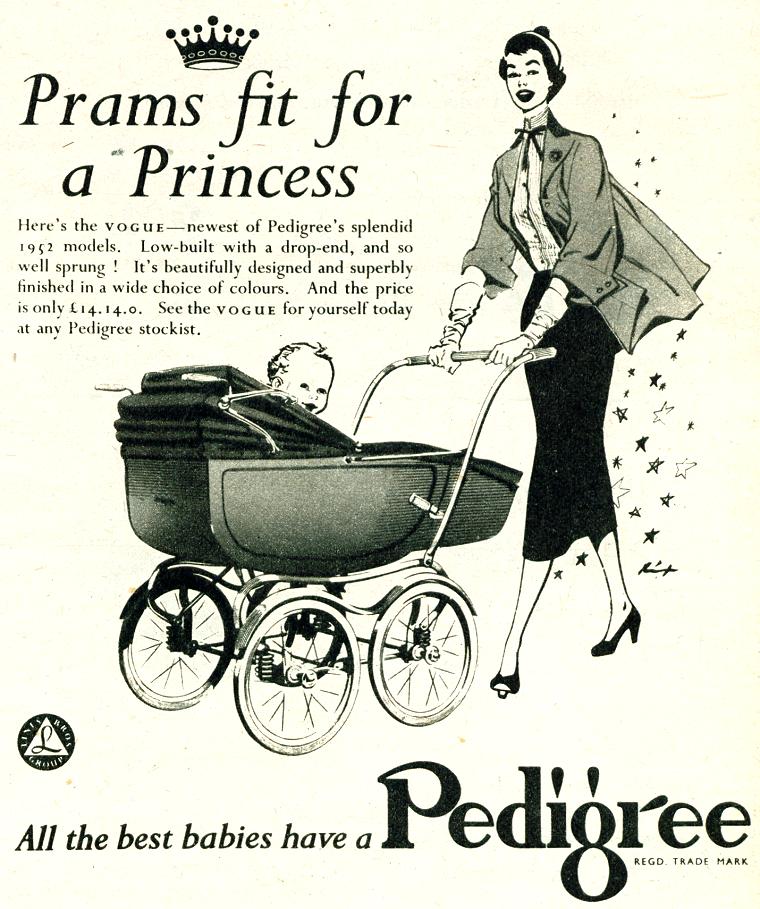 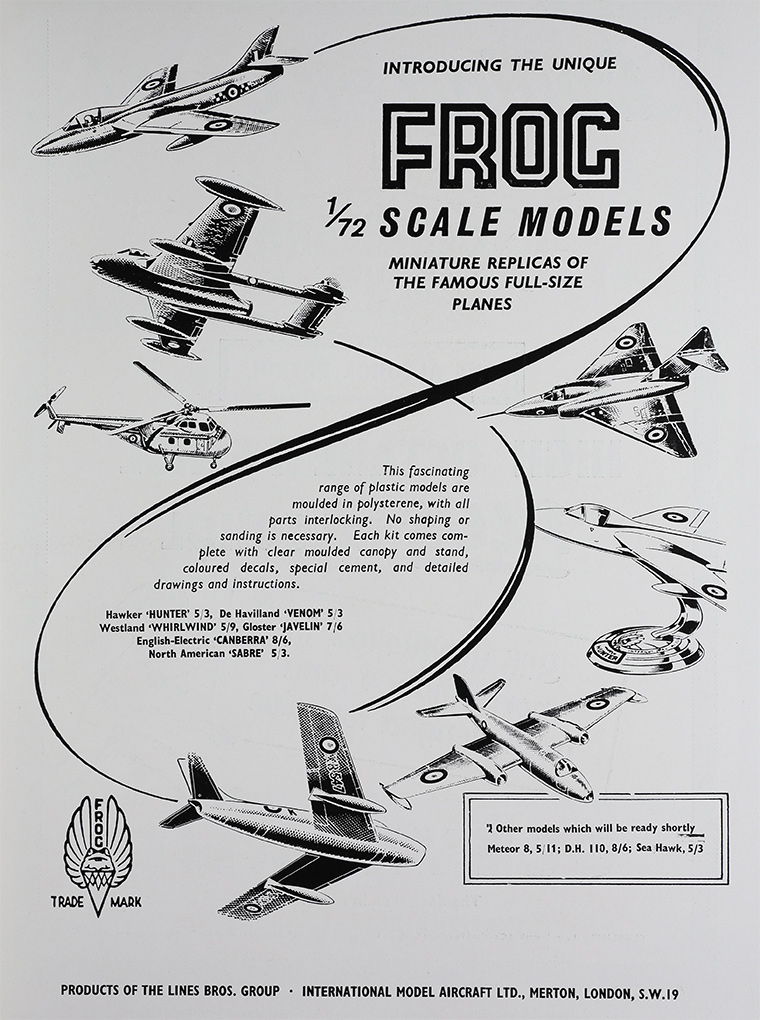 Lines Bros. Ltd was a British toy manufacturer, operating principally under the Tri-ang brand name. At its peak, the company claimed to be the largest toy maker in the world. They also made rocking horses for almost a century.

Post-WWI the business had to be started afresh.

1919 William Joseph Lines, Walter Lines and Arthur Edwin Lines, 3 of Joseph's sons, formed Lines Bros Ltd. On the basis that 3 Lines make a triangle, they adopted the brand name Tri-ang. (The fourth son George Edward Lines was part of the business by 1939 and probably earlier). They obtained an old factory on the Old Kent Road and a timber wharf on the Surrey Canal full of wood-working machinery. They sold off a lot of old equipment and re-equipped the factory. Soon after they added a second factory in the Old Kent Road.

Needing more space they acquired a 47 acre site in Merton, built a new factory on it and moved all of the production there.

Acquired Unique and Unity Cycle Co in Birmingham and built a new factory for it.

Sold some land at Merton to a maker of safety glass.

At the start of the Second World War, production of children's toys was deemed non-essential by the British Government. As a result, production facilities were converted to weapons manufacture, specifically the Sten Mk III submachine gun. Also made gliders and the first rocket propelled aeroplanes (with 20 ft wing span), infra-red night vision apparatus, and scale models of the Normandy beaches in preparation for D-Day.

Post-WWII: re-established the peacetime business. Re-acquired the land at Merton sold to the glass company.

Needing extra space, they took over an existing factory at Cyfarthfa in South Wales and a new factory outside Belfast as well as establishing businesses in the main ex-Colonial countries and in Europe.

1959 AGM told about changes in subsidiaries[9]:

In all the group had 21 factories.

At their peak they had 40 companies world-wide, but as a result of losses overseas they were in financial trouble.

1964 Took over Dinky Toys from Meccano. Lines Brothers had its own railway system, Tri-ang Railways. Meccano, which manufactured the Hornby Dublo range, collapsed. Tri-ang purchased the company, and the combined model railway was marketed as Tri-ang-Hornby although the vast majority of the models were all Tri-ang. The Hornby name being more established and recognised, despite the company's failure) the Tri-ang part was dropped and it was sold as Hornby Railways.

1966 Acquired a majority of the shares in G. and R. Wrenn

1971 Called in the Official Receiver. The Group was broken up and sold off. Rovex Tri-ang (which had the Hornby Railways among its portfolio) was Pocket Money Toys and then sold as Rovex, complete with its factories at Margate and Canterbury, to Dunbee Combex Marx (DCM). The name Tri-ang was sold off.

1972 As a result, the Tri-ang Hornby system was given the name Hornby Railways from January.

1977 Triang-Pedigree was put in the hands of the receiver