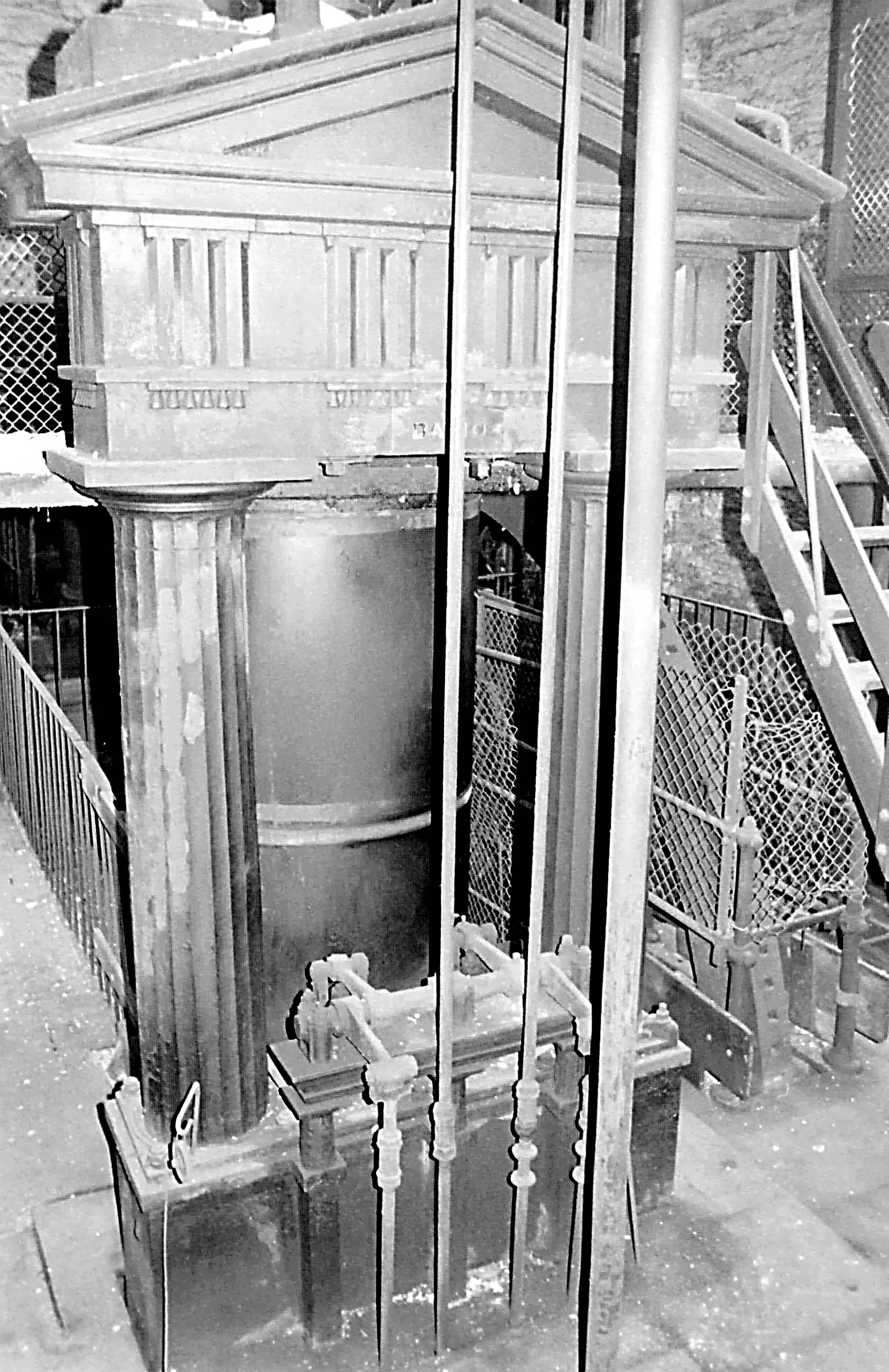 1851 Beam Blowing Engine made for Lilleshall ironworks by Murdoch, Aitken and Co 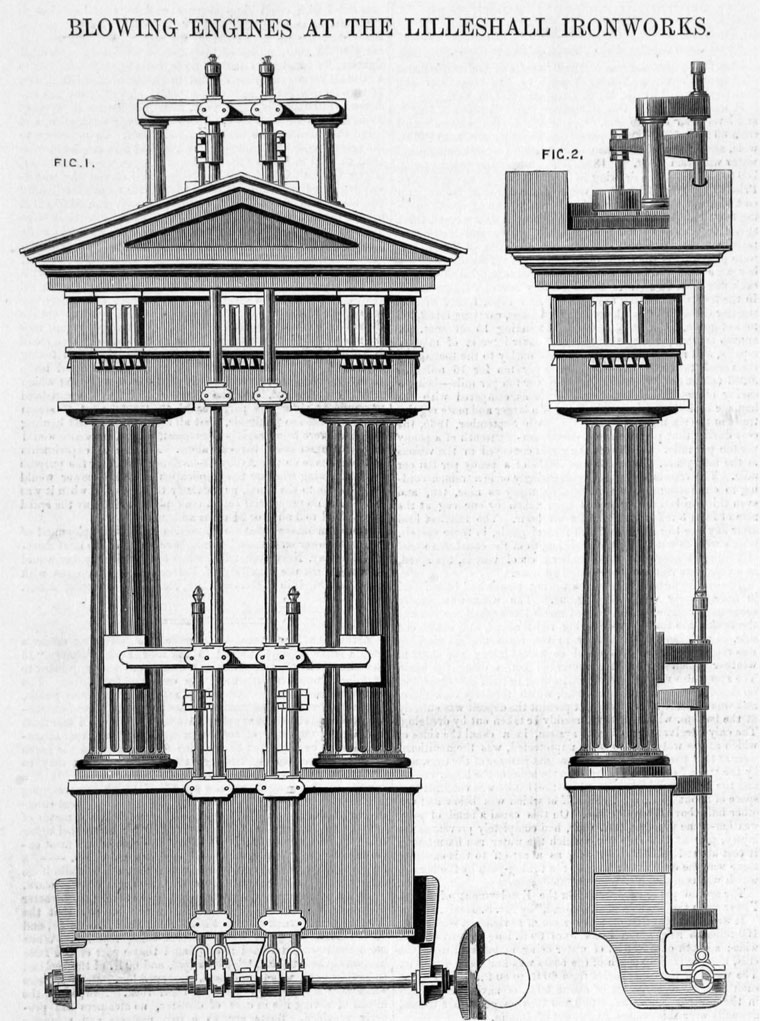 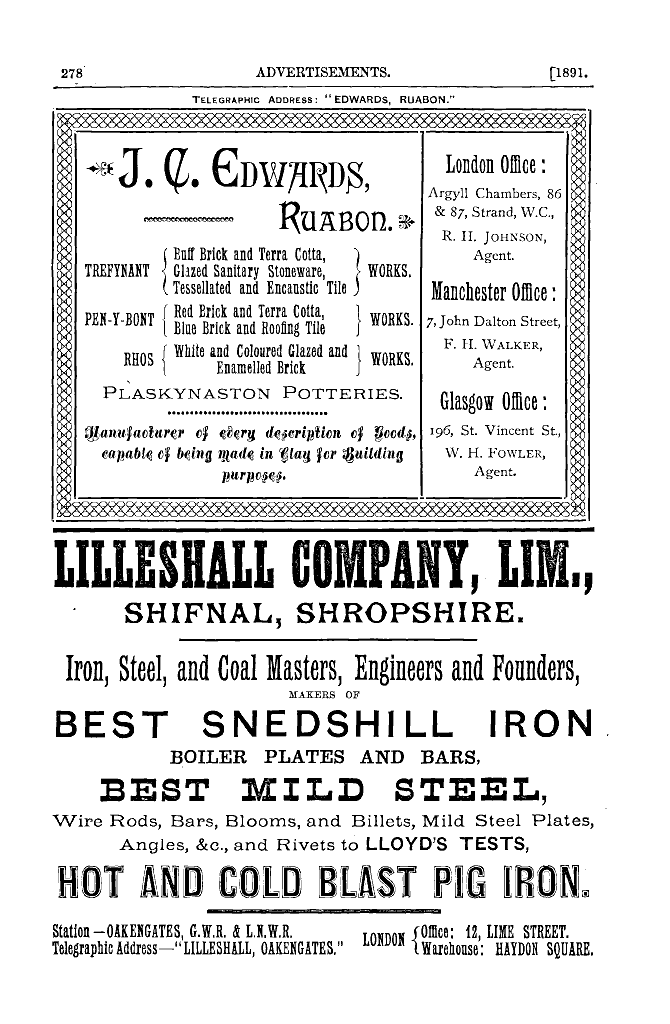 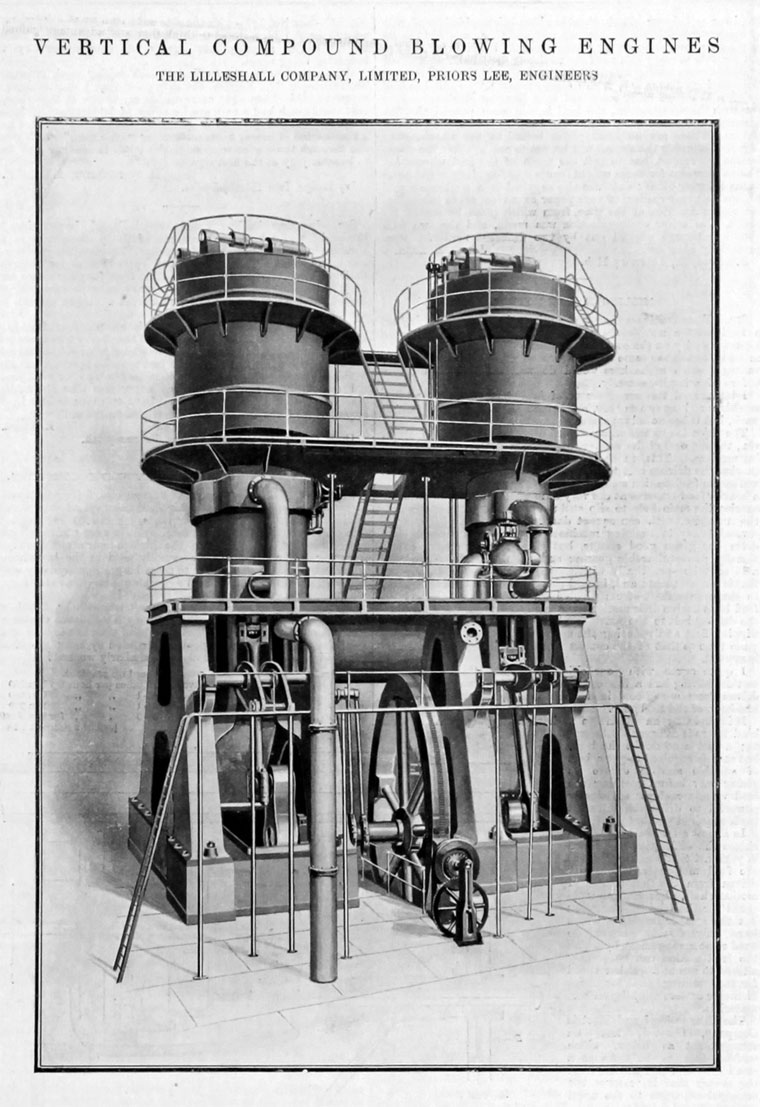 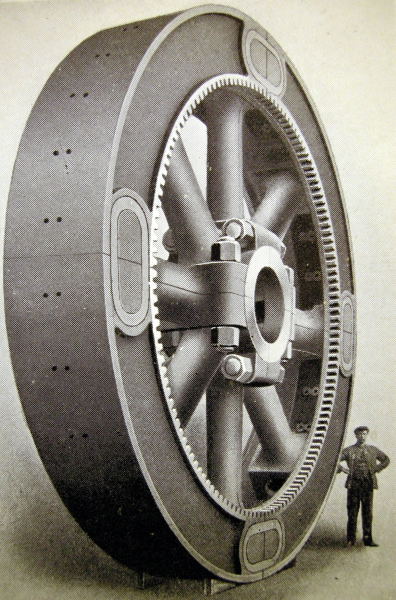 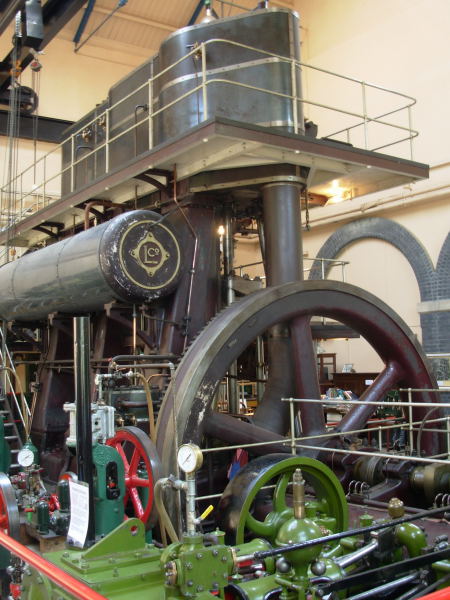 1931 Pumping engine at the Museum of Power

Flywheel on pumping engine at the Museum of Power 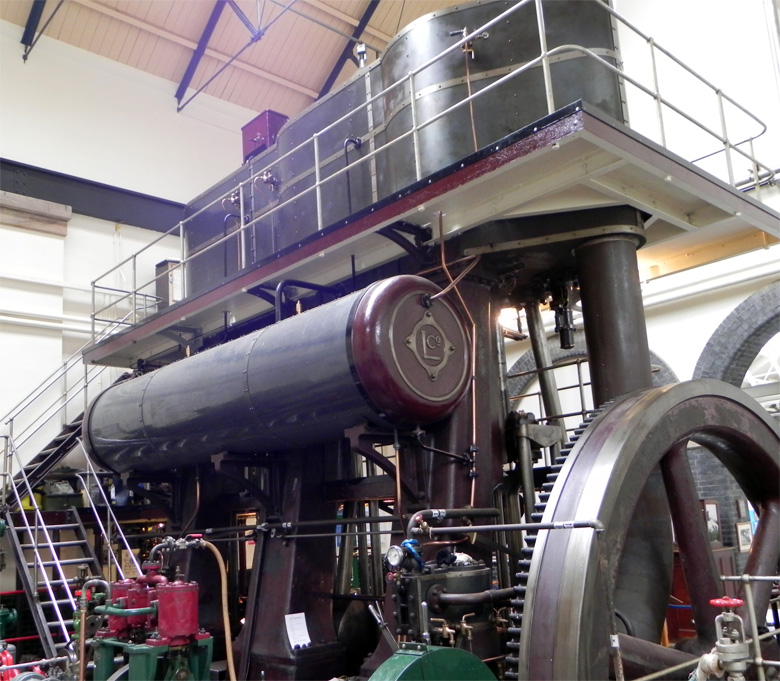 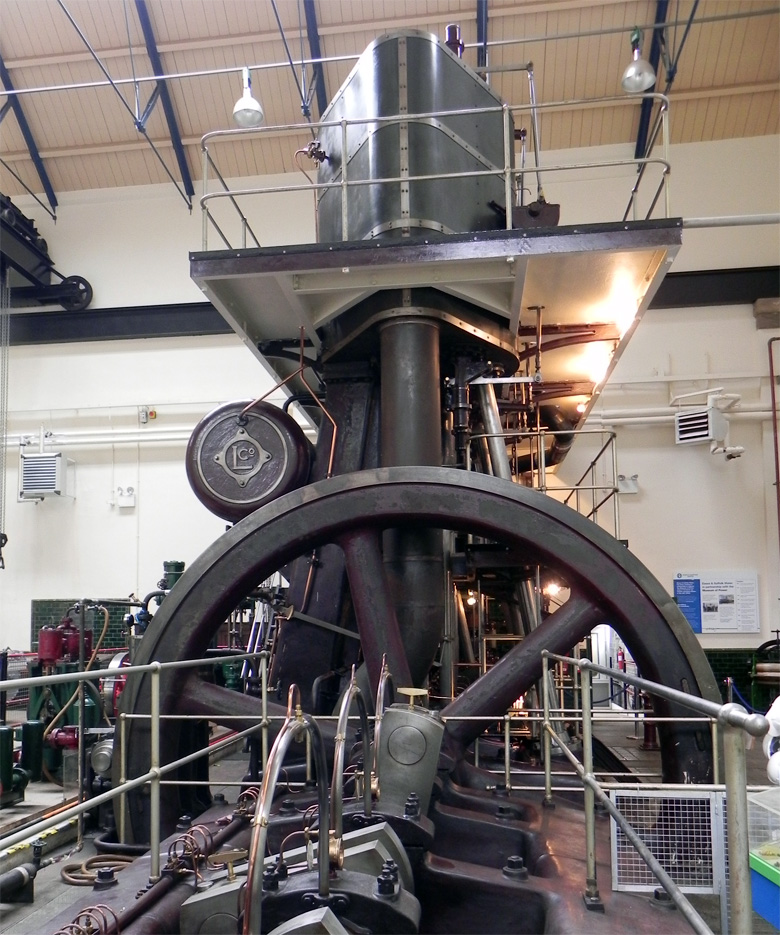 Lilleshall Company were coal and iron merchants, iron founders and manufacturers, steel manufacturers, and mechanical engineers. The company was noted for its winding, pumping and blast engines.

1764 Earl Gower formed a company to construct the Donnington Wood Canal on his Lilleshall estate, to exploit its coal, lime and ironstone resources[1].

1785 Large-scale iron-making began with a furnace at Donnington Wood constructed by William Reynolds and Joseph Rathbone on land leased from Earl Gower, on the north side of the Donnington Wood Canal. Gower contributed £2,000 to the enterprise[2].

1796 John Bishton, agent to the 1st Marquess of Stafford, and his partners bought the works.

1802 The partnership was replaced by the Lilleshall Company, in which the Marquess of Stafford's second son was a partner with four local capitalists, John Bishton the elder, James Birch, John Onions, and William Phillips[3]. John Bishton received 5/16 of the Company.

1807 The Snedshill ironworks, of which at least one furnace was managed by John Horton, was brought into the Lilleshall Company under a new partnership agreement[4].

1810 The Donnington Wood pig iron was of high quality; it was being used at the Soho Foundry, Smethwick at that time.

1825 Two new furnaces were started near the site of the Old Lodge.

c1830 Beam engine for the Lilleshall Co of Priors Lee pits; listed as made by St George's Ironworks [5].

1859 The two remaining Donnington Wood furnaces were blown out and two more added at Old Lodge.

1861 Associated with the Donnington Wood furnaces was the nearby Yard, comprising a foundry and small engineering shop. It closed in 1861 when the New Yard engineering works (sometimes called the Phoenix Foundry) opened at St George's, in Wrockwardine Wood township. This marked the development of the Lilleshall Company as a major engineering concern[6]

1862 Built an exhibition railway locomotive and then built a number for their own use and for local collieries. [7]

In the 1860s the company built 8 pairs of blowing engines for blast furnaces, numerous steam hammers and saddle tank railway locomotives. Machines capable of handling the largest castings were installed.[8]

1868 Exhibited an express locomotive at the Paris Exhibition[10]

1880 The Lilleshall Company, with its coal mines, blast furnaces, engineering and steel works, was incorporated.

1888 The last of the Old Lodge furnaces was blown out. Thereafter the company concentrated all its iron and steel making at Priors Lee.

1890 Negotiations over wages with the Shropshire blast-furnace men was conducted by Mr Perrott of Lilleshall Co[15].

1895 Operated as coal merchants at several places in the county and at Dudley.

1911 Built several large gas engines to work on producer gas[19]. Received a repeat order from William Roberts (Tipton) for a steam blowing engine[20]. Supplied 4 engines for a Mond Gas installation in Japan as part of a power station to supply the electric railways[21]

1922 The Lilleshall Company owned collieries at Priors Lee Hall, Shifnal and in Shropshire.

The Company was a private one in which Lord Granville's family had large interests[24].

c.1948 The Lilleshall Iron and Steel Co was incorporated to hold the iron and steel interests prior to nationalisation

1878 'EARL GRANVILLE THE LARGEST IRONMASTER IN ENGLAND.
His Ironworks.
Earl Granville takes a deep interest in all that relates to the trade, and is well and constantly advised of the various changes, commercially and otherwise, that are continually taking place. His lordship has extensive ironworks in Shropshire and North Staffordshire. There are in the former county four blast-furnaces at Priorslee constantly occupied in making best grey forge-iron, which is mostly consumed by his own works at Snedshill and the leading Staffordshire firms. There is a group of five furnaces at the Lodge in Shropshire making cold-blast iron, which supplies Snedshill, his lordship's own Phoenix engine-shop, Staffordshire, Sheffield, and Leeds with this marvellously superior iron.
Wherever strength is required in casting, such as engine-beams or cannon, the cold-blast is invariably used as a mixture at every noted engine-shop in this and other countries ; for strength this iron is a sine qua non as a mixture. It is also absolutely necessary for chilled rolls and all kinds of chilled work, and is particularly adapted to the great chilled rollers which constitute the heavy crushing machinery of powder-mills at these national manufactories in different parts of the world.
In Shropshire also is his lordship's Phoenix Foundry, a large and well-equipped establishment, where locomotives (colliery,) steam-engines of all classes and sizes, steam hammers, presses, with all and every kind of heavy machinery is turned out to perfection.
His lordship is also the principal partner of the Snedshill Ironworks, in the same county, where the best boiler-plates are made, " Snedshill" brand for this class being unrivalled in quality. These works have 39 puddling furnaces, extensive wire-mills, gobbing fires, and all the appliances for making best charcoal iron. His lordship's partners here are Mr. T. Horton, Mr. Samuel Horton, Mr. Bullock, and another.
On the Lilleshall Estate the coal and ironstone are more abundant than in any other in Shropshire; a hospital is established for the workmen schools and a church have been erected by the noble proprietor and his co-partners; and, to the honour of the company, great facilities are afforded the workmen in cheap cottages with gardens about the estate. The workmen are happy and contented, and we never hear of strikes, and rarely of disagreements, with the employers and the men of this great Estate.
In North Staffordshire his lordship has eight blast furnaces, formerly at Shelton; but believe now the whole of these great smelting-works are being reconstructed at Etruria, which is contiguous. Near the same spot is the Shelton Bar Ironworks, one of the largest in Staffordshire, where plates, bars, angles, tees, and channel iron of the largest dimensions are made. This work has 95 puddling furnaces, with a very large and valuable stock of rolls adapted to all specialities in tees, angles, channel iron, &c., &c.
His lordship has altogether 17 blast-furnaces, with very extensive collieries and clayband ironstone pits, in the above counties. If we take into account the Snedshill Iron Works, the Shelton Bar Ironworks, and the great Phoenix Engine Shop, there can be no doubt that his lordship is the most extensive iron-master England.'[28]