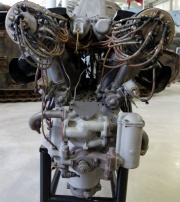 Exhibit at the Tank Museum.

Liberty - a type of aero engine

The Liberty L-8 engine was a prototype of the Liberty L-12 engine. Although it did not see mass production several were built. Manufactured by Packard Motor Car Company in Detroit, Michigan around 1917, it now resides in the National Air and Space Museum in Washington, DC.

It was designed by Jesse G. Vincent of Packard and Elbert J. Hall of the Hall-Scott Motor Co. It was manufactured by Packard, Lincoln, Ford, General Motors, Nordyke and Marmon during the First World War. It was a modular design where 4 or 6 cylinders could be used in one or two banks. 20,478 were built between July 4, 1917 and 1919. Displacing 1,650 cubic inches, bore was 5 inches (127 mm) and stroke 7 inches (178mm). A single overhead camshaft for each cylinder bank operated 2 valves per cylinder. Dry weight was 383 kg and takeoff power at 2,000 rpm was 449 hp. Two examples of a six-cylinder version, the Liberty L-6, were produced but not procured by the Army. Both were destroyed by Dr. William Christmas testing his so-called "Christmas Bullet" fighter.

An inverted Liberty 12-A was also referred to as the V-1650 and was built up to 1926....the exact same designation later applied, due to an identical displacement figure for the two engines, to the World War II Packard car company built examples of the Rolls-Royce Merlin upright V-12 aviation engine engine of World War II.

The engine was also produced in the UK for tank use by Nuffield Mechanisation and Aero and known as the Nuffield Liberty.