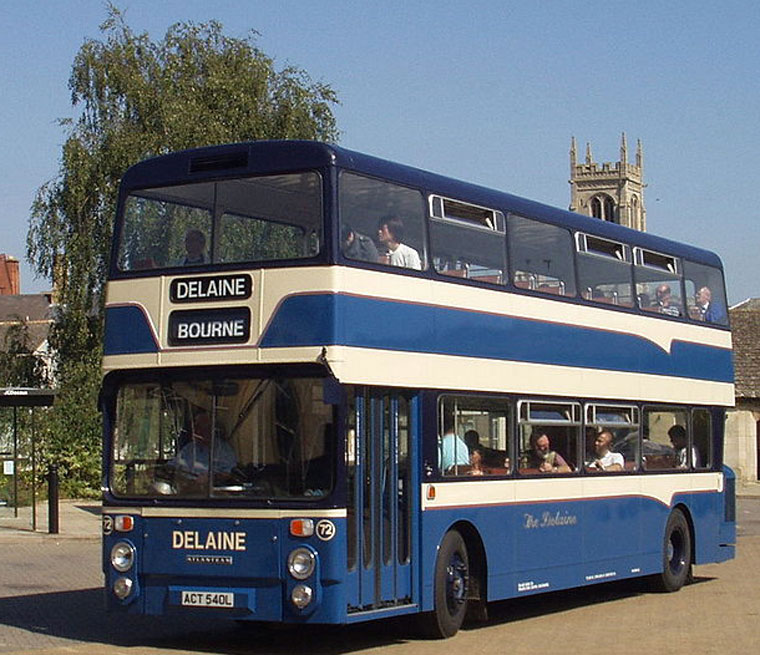 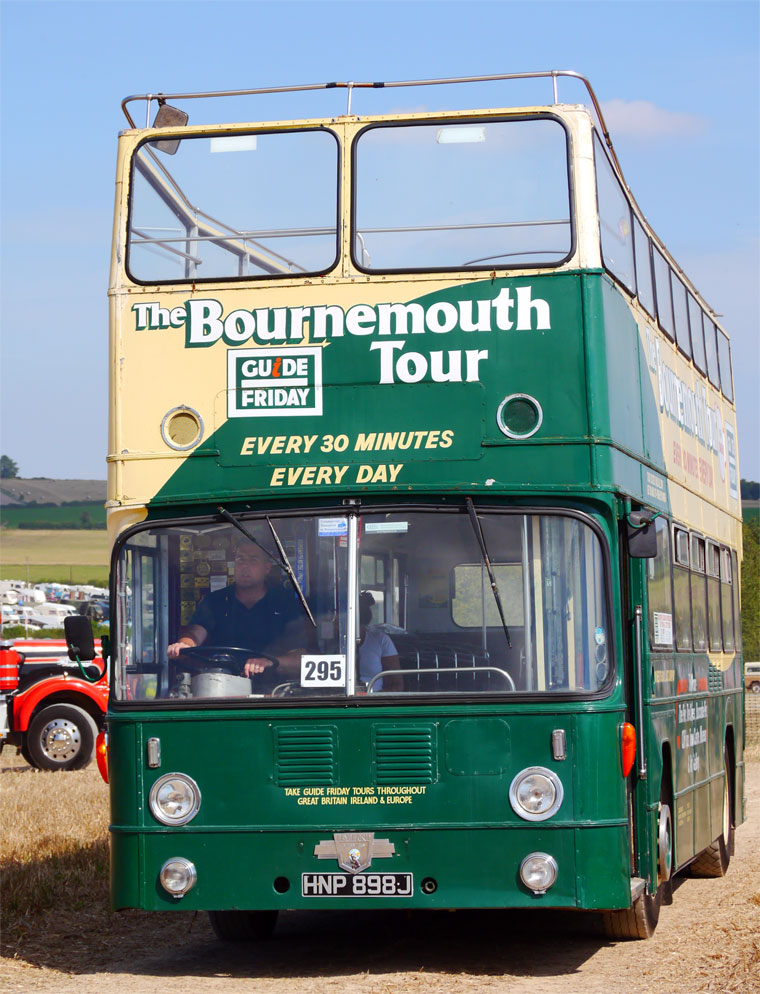 Note: This is a sub-section of Leyland Motors

The Leyland Atlantean is a model of double-decker bus built by Leyland (with bodies added by a variety of companies) in the UK from 1958 to 1986.

It pioneered the design of rear-engined, front entrance double deck buses in the UK, allowing for the introduction of "one person operated" buses.

In 1952 Leyland began experimenting with ideas for a rear engine double decker. A prototype was built, with a body by SARO, to the maximum permitted width of 7 feet 6 inches. It was fitted with a turbocharged version of the Leyland O.350 engine, which was transversely mounted at the rear of the sub frame. The chassis was a platform type frame of steel and light alloy with deep stressed side-members. An automatic clutch and self change gearbox were also fitted. The vehicle, numbered 530001, registered STF90 was designated the PDR1 (R for "Rear-engined").

In 1956 a second prototype, XTC684 (No. 542209) was constructed, this time with an MCCW body, and again fitted with the O.350 engine fitted across the frame. It had a centrifugal clutch, pneumatic cyclic gearbox and angle drive. This vehicle was 13 feet 2.75 inches in height, with a 194 inch wheelbase and overall length of 29 feet 10 inches, and had a seating capacity of 78. Leyland christened this prototype the Lowloader.

Though two prototypes were thoroughly tested, the same problem of a front-engined bus remained — they had rear entrances with the space alongside the driver being wasted.

An amendment to the Construction and Use Regulations in 1956 saw the maximum length for double-deckers increased to 30 feet, allowing a wider entrance to be located ahead of the front axle. This was initially to allow the driver to supervise boarding whilst the conductor collected fares, but quickly it became apparent that the design would allow for one-person-operation.

Leyland took advantage of the new regulation to launch the first prototype Atlantean at the 1956 Commercial Motor Show at Earls Court. Though it featured the front entrance design that would redefine the bus industry, several factors prevented the bus going on the market. The main problem was the high level of engine noise inside the lower saloon, as the engine was still inside the body, with the compartment being used for bench seating.

Mechanically the prototype Atlantean, 281 ATC, was similar to the Lowloader — an O.600 engine transversely mounted at the rear with a pneumo-cyclic gearbox situated in the rear offside corner providing drive in a straight line from the engine. The Atlantean had a light and strong fabricated frame. Light alloy floor plates were rivetted direct to the framework, fulfilling the dual purpose of reinforcing the frame and providing a foundation for the saloon floor. The platform type sub-frame concept from the Lowloader was retained for the prototype. A drop-centre rear axle allowed the flat floor, only one step up from ground level, to continue for the full length of the bus.

The prototype was demonstrated around the country to various operators. It also had an unregistered sister vehicle, which was used as a testbed. Both were subsequently scrapped.

By 1958, Leyland had overcome the majority of the problems and moved the engine to a rear-mounted compartment outside the main body, and the first production Atlantean PDR1/1 with a 195 inch wheelbase was launched at the 1958 Commercial Motor Show. It had simpler mechanical specification than the prototype, with conventional front and rear axles, leaf springs all round and a channel section frame. Glasgow Corporation, James of Ammanford and Wallasey Corporation each put their first example of the type into service in December 1958.

In 1967, Leyland launched the Atlantean PDR2/1 which could be fitted with 33-foot-long bodywork.

In February 1972 Leyland announced the AN68 series to replace the PDR1/PDR2. The new chassis provided a wider entrance and several new safety features were included. An audible and visible alarm prevented engine overheating by giving the driver due warning. A fail-safe parking brake was introduced, while the steering box and brake controls were protected against damage from severe head-on collision, and stainless steel air-piping gave greater resistance to corrosion.

Two models were offered: AN68/1R (9.4m in length) and AN68/2R (10.2m in length). Power assisted steering was standard on the AN68/2R and optional on the AN68/1R. The steering pump was power driven, which replaced the early belt driven system, while the only available engine was the new Leyland O.680. A wide variety of body styles from various manufacturers continued to be offered, allowing the Atlantean to be tailor made to requirements from operators ranging from the small independent to the large city corporation.

In 1978, Leyland started to offer the AN69 with Leyland O.690 engine which was mainly built for export.

The creation of British Leyland in 1968 saw rivals Daimler and Bristol merged with Leyland, bringing the two competing rear-engined chassis (Daimler Fleetline and Bristol VR) together with the Atlantean. Though the Bristol brand was retained, Daimler was dropped and products were rebadged as Leylands.

After the re-organisation, Leyland set out to develop a new rear-engined double deck bus for the London market to replace the troublesome Fleetlines. This new vehicle, the Titan B15 spawned a simpler, non-integral offshoot, the Olympian, which debuted in 1980. Though the Olympian was meant as a direct replacement for the VR, Fleetline and Atlantean, the venerable AN68 continued in production alongside the Olympian until 1986.

The last Atlantean for the domestic market rolled off the production line in 1984, the last of a batch for Merseyside PTE, while the export version remained in production for a further two years, with deliveries to the city operator in Baghdad, the capital city of Iraq.