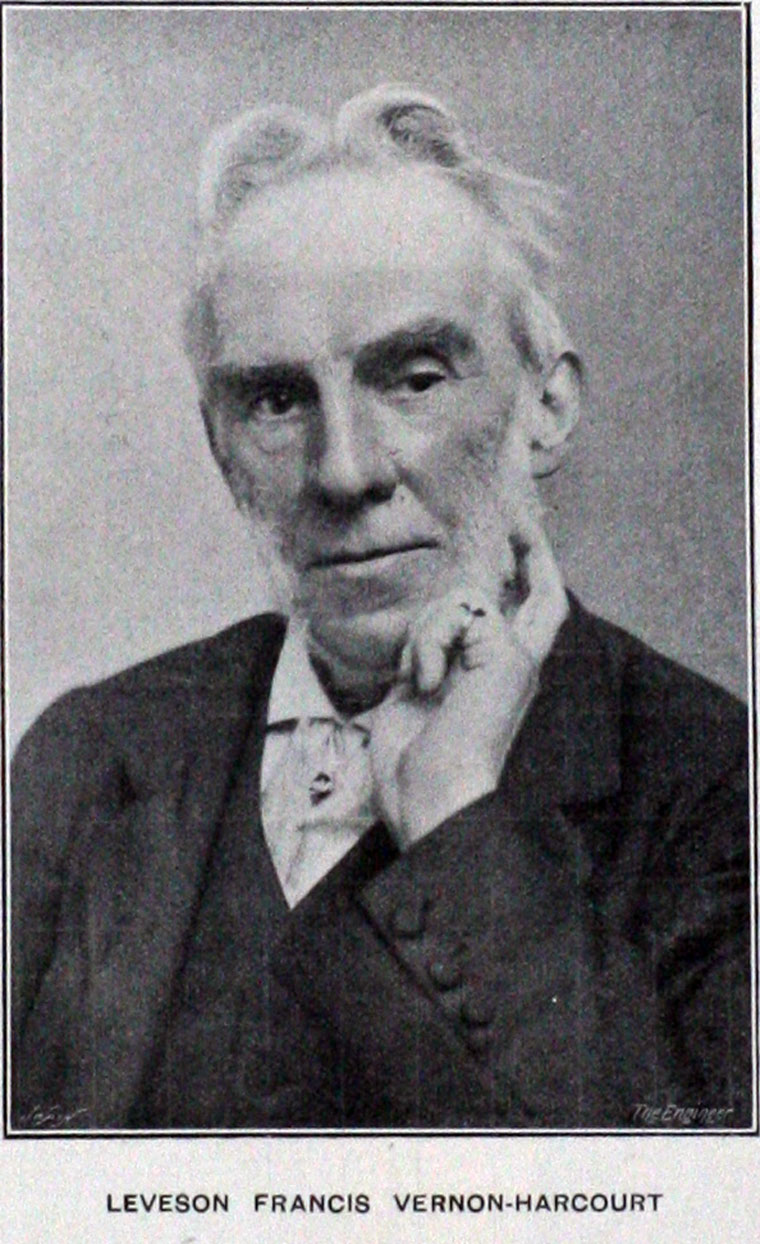 Expert on harbours and navigation

1899 Hon. Sec. of the Harbours, Docks, and Canals section of the Engineering Conference.[2]

LEVESON FRANCIS VERNON-HARCOURT, born in London on the 25th January, 1839, was a younger son of the late Admiral F. E. Vernon-Harcourt and, as a grandson of the Hon. Edward Vernon-Harcourt, Archbishop of York, was cousin to the late Sir William Harcourt.

The subject of this notice was educated at Harrow and at Balliol College, Oxford, where he graduated in 1861, with a fist-class in mathematics and in natural science.

His engineering training was obtained under the late Sir John Hawkshaw, Past- President, to whom he served a pupilage of three years between 1862 and 1865, afterwards remaining as his assistant.

In 1866 he was appointed Resident Engineer on the new works at the East and West India Docks, retaining that position until their completion early in 1870.

He was then selected, in open competition, for the post of county surveyor of Westmeath, but he relinquished this appointment in August, 1870, to go to Alderney as resident engineer of the harbour-works.

Between 1872 and 1874 he was engaged in a similar capacity on the Rosslare harbour and railway, which now forms part of the Great Western route to the South of Ireland.

On his return to London, he carried out a survey of the Upper Thames Valley, on behalf of Sir John Hawkshaw, and in 1878, he decided to engage in consulting practice in .Westminster, devoting himself particularly to matters relating to river-, harbour and dock-works and water-supply.

In 1882 he was appointed to the chair of Civil Engineering in University College, London, a position for which his scientific ability combined with wide practical knowledge admirably fitted him. He retained his professorship until 1905, when, on his resignation, he was elected emeritus professor. As consulting engineer, he acted for a number of public bodies, amongst others the Harbour authorities of Newport (Mon.), of Sligo and of Poole; and his services were frequently requisitioned in connection with parliamentary inquiries. In this manner he was associated with the Manchester Ship Canal Bill, the Ribble, Aire and Calder, and Ouse navigation schemes, the River Usk works, and other important projects. In 1896 he went out to India, at the request of the Calcutta Port Commissioner, to inspect and report upon the navigation of the River Hooghly. He was also invited by the Board of Trade to furnish reports upon various engineering schemes in this country, such as the Birkenhead waterworks in the Dee Valley.

His reputation stood high among his professional brethren on the continent of Europe, by whom his services in promoting a closer and better relationship between maritime engineers of various countries were greatly valued and cordially appreciated. At the time of his death, he was the oldest member of council of the Permanent International Association of Navigation Congresses, upon which he had served for many years. He attended on behalf of The Institution the Congresses held at Brussels, Paris and Dusseldorf, and on the last occasion, at Milan, he was also delegate of the British Government. He served as a British member of the jury for the Paris Exhibition of 1900, and acted in the same capacity at the St. Louis Exhibition of 1904. In the following year, he presided over the Mechanical Science section of the British Association at Ipswich.

In 1906 he was appointed, in conjunction with Mr. Anthony G. Lyster, to succeed Sir John Wolfe Barry and Sir Charles Hartley as members of the International Commission of the Suez Maritime Canal. For his services on an International jury in Vienna in connection with schemes for large canal-lifts, he was made a commander of the Imperial Franz-Josef Order of Austria-Hungary.

His extensive contributions to technical literature were well known to engineering readers and students. He was the author of eighteen Papers, principally on maritime engineering subjects, published in the Proceedings of The Institution, a list of which will be found under his name in the indexes to the Proceedings. For certain of these Papers he was awarded a Telford medal, a George Stephenson medal, Telford premiums and a Manby premium. He also contributed valuable memoirs to the Royal Society, the Society of Arts, the British Association, the Navigation Congresses and other bodies. His larger works include “Rivers and Canals” (1882, 1886), “Harbours and Docks” (1885), “Achievements in Engineering” (1891), “Civil Engineering as applied in Construction” (1902), and “Sanitary Engineering with respect to Water Supply and Sewage Disposal” (1907); as well as articles on River Engineering and Water Supply in the ninth edition of the Encyclopaedia Britannica.

Mr. Vernon-Harcourt married, in 1870, the younger daughter of the late Lieut.-Colonel H. R. Brandreth, R.E., and leaves a son and two daughters.

He died, after a few weeks’ illness, at Swanage on the 14th September, 1907, aged 68. He laboured incessantly, but unobtrusively, for the advancement of his profession, and was a strong and consistent advocate for the thorough scientific training of engineers. Kind and disinterested, he was always ready to help and encourage individuals, and was unwearied in support of the causes which he had at heart. Imbued with a high sense of duty, he did his work without expectation of honours or rewards. The integrity, simplicity and gentleness of his character was recognized no less by his professional colleagues than by his personal friends, and the news of his death called forth many expressions of sorrow and regard, from both private and official sources, at home and, abroad.

His deep interest in the work of The Institution was maintained to the end, and he has bequeathed to it a sum of money which, in accordance with the directions of his will, has been applied by the Council to provide for a series of biennial lectures on those branches of engineering with which he was principally associated.

Mr. Vernon-Harcourt was elected an Associate of The Institution on the 5th December, 1865, and was transferred to the class of Members on the 19th December, 1871.