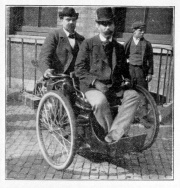 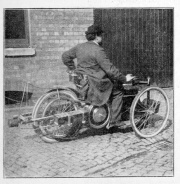 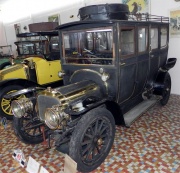 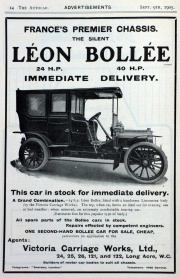 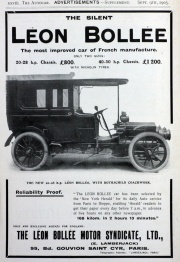 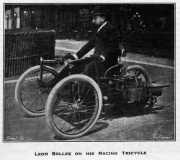 1946. Leon Bollee on his Racing Tricycle.

The first "Voiturette" built by Léon Bollée in 1886 was a three-wheel tandem driven by a single-cylinder 3 HP engine and belt drive. The cars sold well and several hundred were made for Léon Bollée by Hurtu & Diligeon, only the prototypes were made at the Le Mans factory.

The next vehicle appeared in 1899. It was a four-wheel car with independent suspension, whose engine attracted the attention in 1900 of Darracq, which used it in its own models.

In 1903, a new factory was built in Le mans and here Léon Bollée Automobiles built two four-cylinder models: one of 28 HP and 4.6 litres, and another of 45 HP and eight litres. These cars were equipped in 1907 with a six-cylinder motor and in 1909 with a four-cylinder of 10/14 HP.

1913-1917 For a list of the models and prices see the 1917 Red Book. Leon Bollee models were imported by Connaught Motor and Carriage Co.

Léon Bolée died in 1913 but the company continued operations being run by his widow and during World War I, as well as a few cars, made ammunition and machine guns. Car production returned fully in 1919 with the 2612 cc Type H followed in 1922 by a 3918 cc six.

In 1924, the Morris Motor Company, after failing to introduce its cars into France, made a second attempt by buying the factory at Le Mans to make cars with four-cylinder engines very similar to those of the Morris Cowley and Morris Oxford. The new company was called "Morris-Léon Bollée".

The company was reorganized by directors sent from the Morris factory in Cowley, and the production of Morris-Léon Bollée cars began at the end of 1925.

The first car, the Type MLB had a Hotchkiss 12 HP, 2.5 litre engine. In 1928 an 18 HP model appeared equipped with a straight-eight, 3-litre engine but only six were made.

In spite of difficulties in obtaining components, production reached 150 cars per week. However, the French market did not readily take to buying cars made by a foreign company and, as sales did not meet expectations, production stopped in 1928.

Morris was unable to make the French company profitable and finally, in 1931, closed the company and sold the stock to a partnership which handled the sale of the last cars produced. Thus ended the history of the Léon Bollée car.