2. The slenderness of the piers can be appreciated from Drygrange Bridge 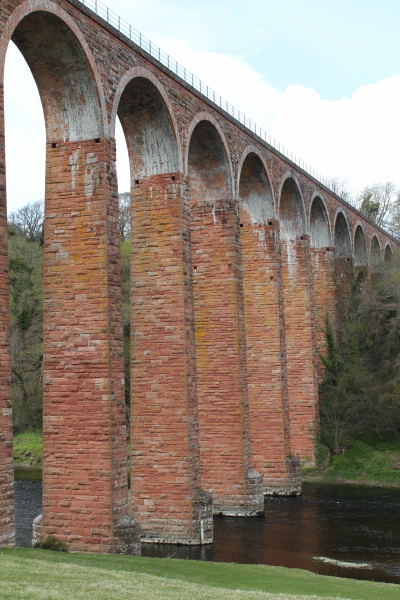 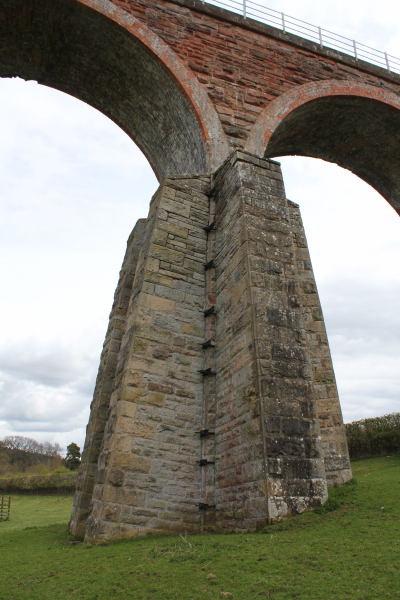 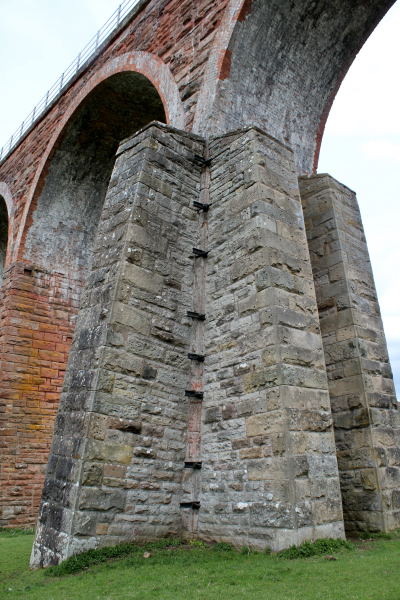 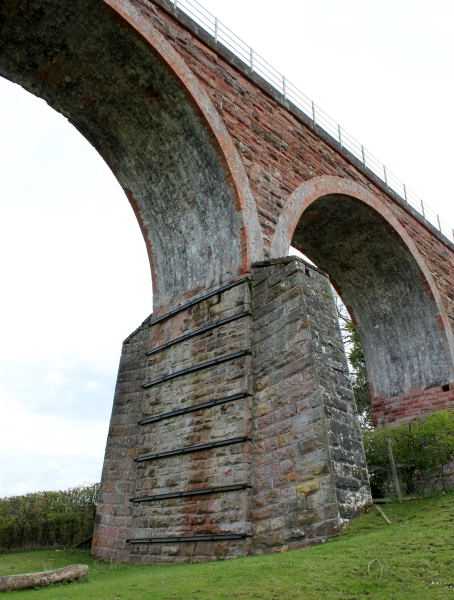 A very impressive masonry viaduct over the River Tweed in the Scottish Borders.

The viaduct was opened in 1865 to carry the Berwickshire Railway, which connected Reston (on the East Coast Main Line between Berwick-upon-Tweed and Edinburgh) with St Boswells (on the Edinburgh to Carlisle "Waverley Line"), via Duns and Greenlaw. The engineers of the railway were Charles Jopp and Wylie and Peddie.

The nineteen arches, each of 43 feet (13 m) span, are of brickwork, and the abutments, piers and spandrel walls are of rustic-faced red sandstone. The highest arch is 120 ft (37m) above the river. Some later reinforcement of piers on the south bank with old rails and buttresses was required (see Photos 3 and 6-10). The railway was severed by flooding during August 1948, after which passenger trains never ran west of Duns. Freight trains continued to run across the viaduct as far as Greenlaw until July 19, 1965.

The viaduct was renovated by Historic Scotland between 1992 and 1995. Good views of it can be obtained from Drygrange Bridge and from the river bank. The former trackbed is not normally open to the public. Parking is available via a junction on the A68 immediately south of the new Drygrange bridge. Although there is a layby on the B6360 close to the old Drygrange bridge, this should definitely be avoided because of fast traffic on a bend and a busy junction.

1864 'The Drygrange Viaduct appears to be getting on well; as yet there has been no frost to retard the building, and thirteen of the high piers are now built to the level from which the arches spring. There are in all eighteen piers, and the remaining five will take some time before they can be built to the proper height, as they require to carried about thirty-five feet higher than their present level. The raising of the materials for building these piers is effected by means of small portable engine and Derrick crane. The jib of the crane is one hundred and five feet in height, and this is very much higher than any hitherto in use in Scotland. The working of the crane is remarkably easy, and very expeditious, and if the contractor is so fortunate as to get his operations completed without accident to his workmen, it may well be matter of great thankfulness; for most assuredly the Drygrange Viaduct is, from its extraordinary height, a structure which requires the greatest possible care in the management both of workmen and material. Preparations are being made for constructing the centering necessary for the arches, and the bricks will shortly be brought forward, so soon as the rails are laid, and a junction formed with the North British line. The remaining works betwixt the viaduct and the termination are nearly completed, so that a very few weeks will see this portion entirely finished. The viaduct, which is the key of the work, will in all probability remain untouched during the winter months, as, at the elevated position in which workmen will be engaged, the cold and wind will be quite powerful enough to stop all operations; but judging from the steady manner in which the work has been conducted hitherto, there is little likelihood of any delay taking place, or opportunity being lost —Daily Review.'[1]