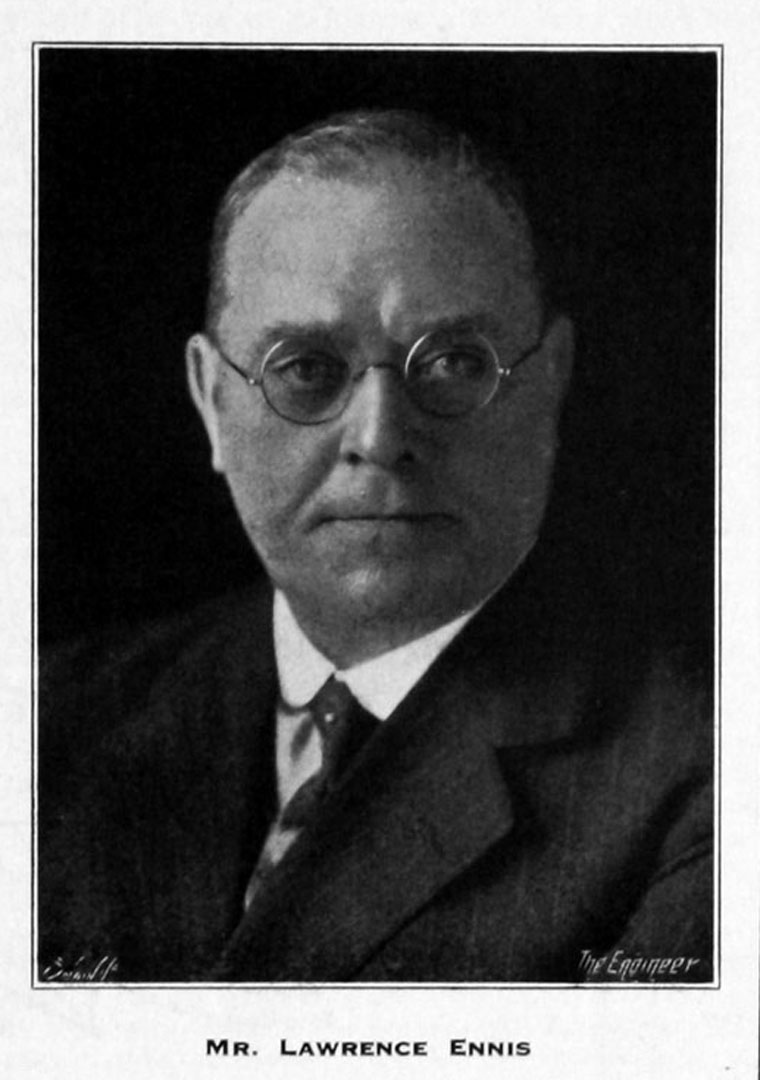 LAWRENCE ENNIS, C.M.G., O.B.E., will be remembered for his great work as resident director in Sydney for Messrs. Dorman, Long and Company, Ltd., during the construction of the Sydney Harbour Bridge. He was born in 1871 at West Calder, Midlothian, and at an early age he went with his parents to the United States.

From 1885 to 1890 he served his apprenticeship with Messrs. Connell and Denzler, mechanical engineers, of Rochester, N.Y., and subsequently joined the American Bridge Company as superintendent of the firm's bridge and constructional works. Later he was made superintendent in the works of the Baltimore Bridge Company. Returning to England in 1903, he began his association with Messrs. Dorman, Long which lasted until his death. His first appointment was that of manager of the bridge and constructional works at Middlesbrough, and in 1904 he was made works manager. During the War he had to deal with the abnormal demands made upon the firm and he therefore planned and supervised the erection of new steel plant and rolling mills at Redcar.

In 1915 he was promoted to be general manager of both the Britannia Works at Middlesbrough and of the new works at Redcar. In addition he established a plant for producing shells and shell steel and was awarded the O.B.E. for his services in this direction. He played an important part in the steel industry of the country as President of the Iron and Steel Trades Employers' Association during the years that followed. His work on the greatest achievement of his career, the Sydney Harbour Bridge, commenced in 1924, when his firm submitted a tender of 4,218,000, which was accepted by the Government of New South Wales. From 1925 to 1932, when the bridge was completed, Mr. Ennis resided in Sydney, and was successful in overcoming special difficulties on the site, such as the devising of a special cradle for use in handling the deck hangers, which were not stiff enough to be erected by ordinary means.

He was equally successful in maintaining friendly relations with the Australian workmen who were engaged throughout the contract. Mr. Ennis's work in the great undertaking was recognized in 1933, when he was created C.M.G. in the New Year's Honours List. In 1932 he returned to England and was made managing director of the firm, a position which he held until within a few months of his death. He was associated with many other important works, both at home and overseas, including the bridge, 6,000 feet long, across the Ganges at Allahabad, and the Bombay pipe line, 110 miles long. More recently, during the unprecedented demand for iron and steel, he showed considerable foresight in organizing his company's programme of production.

"...death of Mr. Lawrence Ennis, of Dorman, Long and Co., which took place at his home, 5, Morpeth Mansions, Morpeth-terrace, London. S.W.1, suddenly at Thursday evening of last week, May 5th. Mr. Ennis, who was in his sixty sixth year. was a director of Dorman, Long and Co, and only retired from managing directorship of the firm about a year ago. He was, it will be recalled, entrusted by his firm with entire manufacture and erection of the Sydney Harbour Bridge, with the success..."[More].