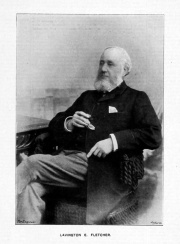 1822 June 9th. Born at Henley on Thames, the son of David Fletcher, School Principal, and his wife Elizabeth

LAVINGTON EVANS FLETCHER was born at Henley on Thames on 9th June 1822.

In 1839 he was articled to Messrs. Barrett, Exall, and Andrewes, Katesgrove Iron Works, Reading, with whom he remained nearly two years after his pupilage. While there he had charge of erecting the first engine, boiler, and biscuit machinery for Messrs. Huntley and Palmer's biscuit manufactory; and also superintended the erection of an engine, boilers, and pumps, for draining one of the shafts, 200 feet deep, of the Box tunnel in course of construction for the Great Western Railway.

At this time economy of fuel in steam engines and boilers began to engage his attention, in connection with the repairs and adjustment of engines for various paper mills, among which were those of Mr. Spicer at Beaconsfield and Mr. Poulton at Alton.

At Reading also he designed and constructed in 1842-3 a steam road carriage; but its running had to be given up, because so many horses took fright at it.

Early in 1843 he went to Nassau in Germany for a short time.

During the railway mania in 1845-6 he did a good deal of surveying for lines then proposed.

In the five years 1846-50 he was engaged under Mr. I. K. Brunel as an assistant engineer upon the South Wales Railway at Swansea. Besides several bridges and tunnel fronts he designed the mechanical arrangements of the iron swing-bridges at Carmarthen and at Loughor.

He also worked out the details and superintended the erection of the Landore viaduct, designed by Mr. Brunel, a compound structure of wood and iron trussing, a third of a mile long, and at that time one of the largest in the kingdom; it occupied about two years in construction, and five years after its opening in 1850 he gave a description of it to the Institution of Civil Engineers (Proceedings 1855, vol. xiv, page 492). It was the last of the old wooden viaducts to be replaced lately by an iron structure.

On the completion of the South Wales Railway he became partner in London in 1851 with Mr. John Frederick Spencer, who had been his fellow pupil at Reading, and had acted as steersman of the steam road carriage in its runs thence. As consulting engineers they designed several iron screw steamers, and prepared plans for the engines and boilers, with a special view to economy of fuel.

On the dissolution of the partnership in 1855 he had charge of the drawing office of Messrs. Gwynne and Co., Essex Street, Strand; and was afterwards engaged under Mr. Latimer Clark in designing and erecting an engine for exhausting the air from the pneumatic despatch tubes laid under some of the London streets.

In 1861 he was appointed chief engineer, under the then title of chief inspector, to the association for the prevention of steam boiler explosions and for effecting economy in the raising and use of steam, which bad been established in Manchester in 1854 under the chairmanship of Mr. William Fairbairn, and was afterwards known as the Manchester Steam Users' Association.

In 1867 he conducted experiments to ascertain the result of injecting cold water into some circulating domestic boilers when red-hot, and found that no explosion ensued.

With Dr. Richardson of Newcastle-on-Tyne he carried out in 1868 a series of trials, known as the Wigan Coal Trials, for the South Lancashire and Cheshire Coal Association, for the purpose of ascertaining the evaporative efficiency of the coals of those districts, and of showing their suitability for use in the navy.

In 1874-76 he subjected to a series of hydraulic bursting tests a Lancashire boiler made from his designs, with a view to ascertaining the strength of various riveted joints and the value of different methods of strengthening the plate round manholes, as well as the valise of cast-iron branches for fittings.

In 1876 he contributed a paper to this Institution upon the Lancashire boiler, its construction, equipment, and setting (Proceedings, page 59). In the same year he acted as scientific assessor in investigating the fatal boiler explosion which occurred on board H.M.S. "Thunderer" on 14th July 1876.

In 1881 he was concerned with the parliamentary enactment obtained by Mr. Hugh Mason, then president of the Manchester Steam Users' Association, providing for an enquiry and report by the Board of Trade upon every boiler explosion on land.

In 1882 he carried out at Preston a further series of experiments, known as the red-hot furnace-crown experiments, upon turning cold water into a red-hot Lancashire boiler; these were far more elaborate than the earlier in 1867, and with the same result that no explosion occurred.

Early in the present year his health broke down, and after temporary recovery his death took place on 14th June 1897 at the age of seventy-five.

"...decease of Mr. Lavington Evans Fletcher, M. Inst. C.E., at his residence, Fairfield, Alderley Edge, at the age of seventy-five, after a somewhat tedious illness. Although his name has been chiefly identified for many years with steam engine and boiler inspection, Mr. Fletcher's experience was of a varied character. He served his time with Messrs. Barrett, Exall, and Andrews, of Reading Ironworks. He had charge of the erection of an engine and pumps in Box tunnel, and erected the first engine and biscuit-making machinery employed by Messrs. Huntley and Palmer's at their well-known works at Reading. He also devoted his attention to economising fuel, and for this purpose repaired and adjusted steam engines for different papermakers, including Mr. Spicer, of Beaconsfield, and Mr. Poulton, of Alton. From 1846 to 1850 ho was engaged under Mr. I. K. Brunei, C.E., chief engineer..."More.

"MR. LAVINGTON EVANS FLETCHER, whose death on the 14th inst. we briefly announced last week, was in his 76th year, and during the later part of his career, as chief engineer to the Manchester Steam Users' Association, he did excellent service in connection with legislation relating to boilers.

Mr. Fletcher had just that varied training which entitled him to occupy such a position. He commenced his course of practical engineering with the late firm of Messrs. Barrett, Exall, and Andrews, of Reading, where he superintended the erection of steam engines and boilers, as well as the execution of contracts for ironwork on the Great Western Railway, when that line was in course of construction. Amongst the work of which he had charge was the erection of engine and pumps in Box Tunnel; while at Reading he also erected the first engine and biscuit-making machinery employed by Messrs. Huntley and Palmer at their well-known works there. He also devoted his attention to those improvements in engines and boilers Which insured economy in fuel, and for this purpose repaired and adjusted steam engines for different papermakers, including Mr. Spicer, of Beaconsfield, and Mr. Poulton, of Alton. From 1846 to 1850 he was engaged under Mr. J. K. Brunel, C.E., chief engineer to the South Wales Railway, in getting out plans for mechanical structures such as swing bridges, &c., and in superintending the construction of various works, among which was the large Landore viaduct near Swansea.

After leaving Mr. Brunel, Mr. Fletcher undertook the design, and superintended the construction of several iron screw steamers, including engines and boilers, for various steamship owners, among whom was Mr. H. W. Schneider, the proprietor of iron mines at Ulverston and Barrow, and formerly M. P. for Norwich. Subsequently he was engaged by Messrs. Gwynne, then of Essex-street, Strand, in designing machinery and engine work, after which he was engaged by the Electric and International Telegraph Company under the late Mr. Latimer Clark, in designing and erecting a pumping engine for exhausting the air from lengths of tubes laid under the streets, through which messages in sealed envelopes were transmitted by pneumatic pressure from different parts of London to the central station.

In January, 1861, Mr. Fletcher was appointed chief engineer to the Association for the Prevention of Steam Boiler Explosions, now known as the Manchester Steam Users' Association. With this organisation he was engaged up till the date of his death, so that he had been connected with it for the long period of 36 years. It is almost impossible to over-estimate the great influence he, as the chief organiser, exerted on legislation relating to steam boilers and machinery. He was ever watchful against immature proposals born of panic, while at tHe same time directing his energy to insure that the worker should have due protection with needless waste of capital. During the 36 years of his occupancy of the position, he devoted the most careful attention to the extension of the principle of periodical inspection of steam boilers, for which purpose the Association was originally formed. By means of the printed monthly reports issued by the Association for many years, he circulated much information to the general public on the cause of steam boiler explosions, while he also took an active interest in the promotion of legislation with a view to their prevention. At the time of his death he was engaged in furthering the Bill in trod need into the House of Commons by Sir William Houldsworth, which seeks to secure the periodical inspection and certification of practically every steam boiler in the kingdom.

We regret to record the death on Monday last, the 14th inst., at Fairfield, Alderley Edge, of Mr. Lavington E. Fletcher the well-known chief engineer of tho Manchester Steam Users Association. Mr. Fletcher, who was 75 years of age, did much to raise the standard of boiler construction and during the 35 years that he held the position of chief engineer to the Manchester Steam Users Association he took a most. active part in the promotion of legislation having for its object the investigation and prevention of boiler explosions. He also carried out much valuable experimental work connected With the construction and working of boilers, and nothing could exceed the care and conscientiousness with which he recorded results. We hope in a future issue to give a further notice of Mr Fletcher's career."

1844 Lavington Fletcher, with the help of a fellow-pupil, John Frederick Spencer, designed and built a steam carriage which had many notable features, chief of which were its weight, only 15 cwt., and its steam pressure 400 lb. per square inch (a remarkable figure for that date) The carriage had three wheels and was steered by a tiller on the front wheel frame. The engine had a 4in. cylinder, acting direct on the rear axle, and the boiler was of the vertical fire-tube type. The carriage, with Mr. Spencer at the tiller, made many successful trips about Berkshire, its speed on the level being from l5 to 18 miles an hour but it was naturally regarded with no favour by horse users in the neighbourhood, for Mr. Spencer used to say that the exhaust sounded like a Gatling gun. The feed pump was the chief source of trouble and eventually led to the carriage being laid up, the engine and boiler being used by a builder in his workshop.[9]