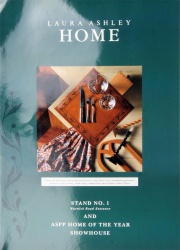 1953 Laura and Bernard Ashley started printing fabric on their kitchen table in London, following a Women's Institute exhibition at the Victoria and Albert Museum on traditional handicrafts.

Laura was inspired to make her own patchwork quilts, but couldn't find any suitable fabrics in the shops, so the young couple decided to try producing their own with a £10 investment in wood for a screen, dyes and some linen, along with many trips to libraries to learn everything about fabric printing.

They produced small scarves which sold in great quantities in shops including John Lewis and Heal's. Also produced tea towels and placemats, with designs from Victorian advertisements and playbills often with quirky, humorous images.

1954 Ashley Mountney Ltd became a registered company but soon the name of the company was changed to Laura Ashley, to reflect better their popular products.

1958 The premises were flooded by the river Darent.

1958 Opened a showroom in London

1960s The Ashley family moved to Wales (where Laura had been born). They first opened a shop in Machynlleth selling locally produced honey and walking sticks as well as their own products. Here Laura worked with a seamstress to introduce their first fashion items.

Laura Ashley established her home furnishing and clothing company in the Newtown area.[1]

They set up business in the vacant social club in Carno, Montgomeryshire, but moved in 1967 to the closed railway station. Here, the company grew with the development of Bernard Ashley's first flat bed printing machine which could produce 5,000 metres of fabric per week.

1966 Production began of their first dress produced for social, rather than work attire. Bernard's keen business eye as well as Laura's love of all things Victorian led to the long length silhouette and feminine styles which would become the company's trademark and was right on trend at the end of the 1960s.

Initially business was slow, but after Bernard took out 100 adverts on the underground, turnover rose 300% in 3 days, and increased to 3000% in the following 2 months!

Licensing operations abroad led to the opening of department store concessions in Australia, Canada and Japan.

Shops were opened in Paris and San Francisco in 1974

1977 Gained a Queen's Award for Export

By 1979 there were over 70 Laura Ashley shops worldwide. Laura and Bernard moved from Wales to northern France.

1985 Laura died as a result of a fall. The public floatation of Laura Ashley Holdings plc was 34 times oversubscribed.

2005 Production operations concentrated on one site in Newtown, Powys, where it currently produces paint, wallpaper and made to measure curtains.