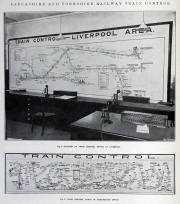 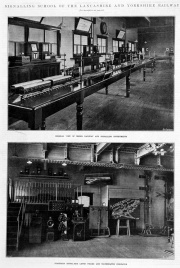 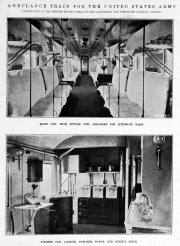 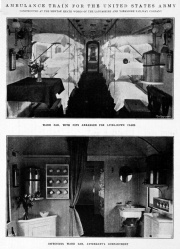 Article about The Lancashire and Yorkshire Railway from One Hundred Years of British Railways in The Engineer here: [1]

1847 The Lancashire and Yorkshire Railway (L&YR) was incorporated in 1847, being an amalgamation of several important lines, the chief of which was the Manchester and Leeds Railway

For working purposes it was divided into three divisions:

There were various lines between the Central and Western Divisions but only one route between the Eastern and Central Divisions. This route cut through the Pennines between Lancashire and Yorkshire via a number of long tunnels with the longest being Summit Tunnel, 2,885 yd in length, near Rochdale. There were six others over 1,000 yd long.

In 1876 the dark green was changed to a light green and goods engines were painted plain black.

1878 The start of the goods locomotives also appearing in light green.

1883 All locomotives were painted black. Lining was red and white for passenger locomotives and red only, or none, for goods locomotives

1875 Coaching stock was originally painted teak changing in 1875 to an overall light brown. In 1879 it was decided to use ‘a little brighter shade’.

1881 June. It was announced that the lower panels of carriages were to be painted ‘lake colour’.

1879 On June 2nd the Lancashire and Yorkshire Railway extended its Blackburn-Chatburn line to Hellifield, where it joined the Midland and allowed for a through service later by Midland trains between Scotland and Manchester and Liverpool.[3]

1896 Between 1896 and 1914 the upper panels became buff with the lower in purple-brown, ends were dark brown. Roofs were normally dark grey but some did appear in red oxide.

1902 Wagons were unpainted until 1902 except for the ironwork which was black. After 1902 it was painted dark grey. The illiterate symbol of an inverted solid triangle within a circle was replaced from 1902-3 with the letters LY. Break/Brake vans were black and special traffic wagons were painted in various colours e.g. Gunpowder- red, Fish – white, Butter – pale blue etc.

1912 Dick, Kerr and Co‘s Preston factory were considering tendering for a Brazilian contract and approached the L&Y to use the Holcombe Brook branch for test purposes at Dick, Kerr’s expense. The line from Bury (Bolton Street Station_ to Holcombe Brook was electrified with the overhead 3.5 kV DC system; rolling stock was also supplied at Dick Kerr's cost. After prolonged trials the trains entered public use on 29 July 1913. The L&Y purchased the equipment and stock on the successful completion of the trials in 1916.

1913 A decision was taken to electrify the Manchester to Bury route at 1.2 kV DC using the 3rd Rail system in an attempt to overcome competition from trams. Electric trains began running on 17th April 1916 but, as Horwich was by then involved in war work, deliveries of the new electric stock was delayed - steam trains were only withdrawn from the route in August 1916.

1917 Work started on the Holcombe Brook branch to convert it to 3rd rail distribution to match the Manchester-Bury system. 3rd rail trains started to run on 29th March 1918.

1920 the L&Y was considering electrifying the Manchester-Oldham-Shaw and Royton lines but no work was carried out.

The L&YR had the largest shipping fleet of all the pre-grouping railway companies. In 1913 the L&Y owned 26 vessels with 2 more being built plus a further 5 that were in joint ownership with the London and North Western Railway. The L&YR ran steamers between Liverpool and Drogheda in Ireland; between Hull and Zeebrugge; and between Goole and many Continental ports, including Amsterdam, Copenhagen, Hamburg, and Rotterdam. The jointly owned vessels were between Fleetwood, Belfast and Londonderry.

1922 January 1st. The LYR amalgamated with the London and North Western Railway.