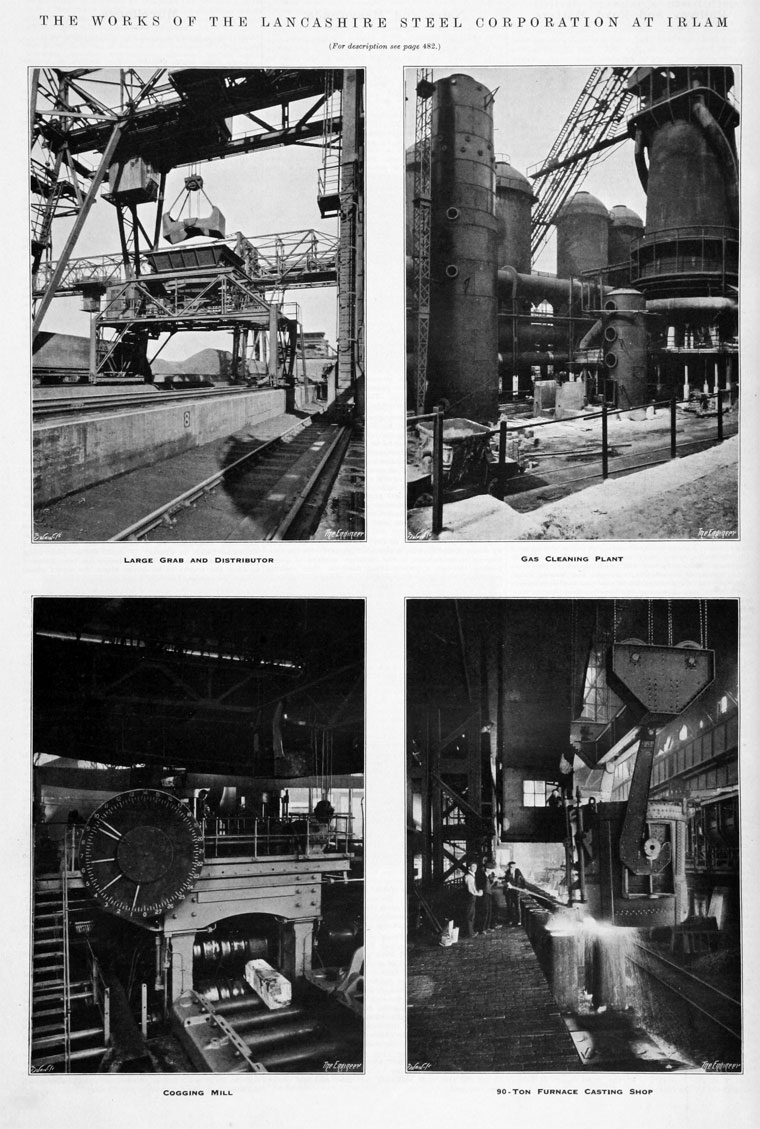 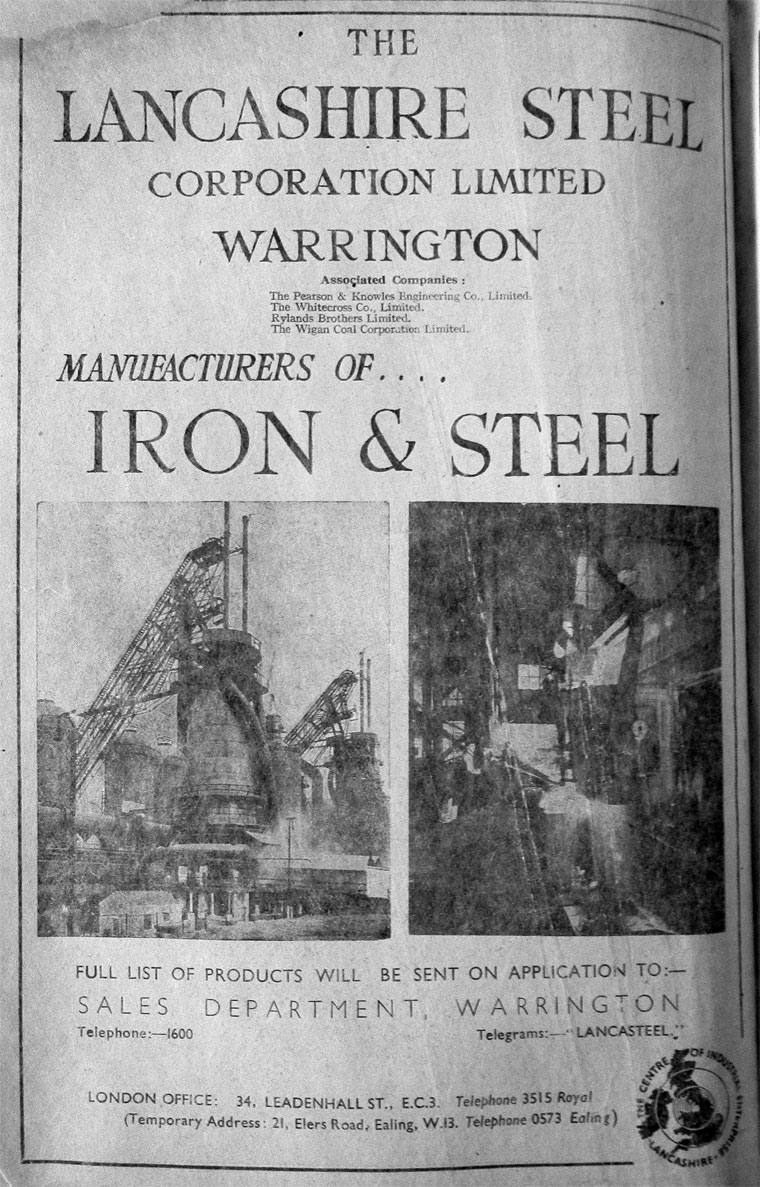 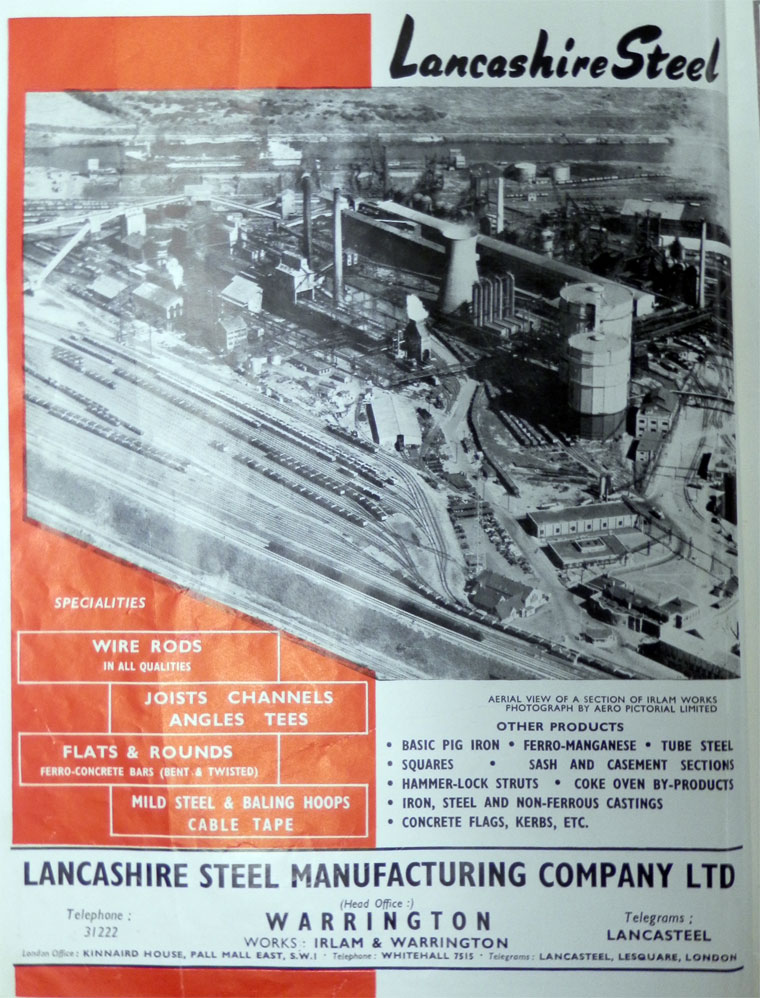 of Warrington and Irlam.

1930 The Lancashire Steel Corporation was formed to acquire the iron and steel businesses of the Pearson and Knowles Coal and Iron Co Ltd, the Partington Steel and Iron Co Ltd and the Wigan Coal and Iron Co Ltd[1]. Another new company was formed to hold the coal interests which would be called the Wigan Coal Corporation Ltd of which the Lancashire Steel Corporation would hold a 40 percent interest. The share capital of Rylands Brothers of Warrington, perviously held by Pearson and Knowles Coal and Iron Co also transferred to the new steel company. New capital would be raised which would be used for investment in expanding the Irlam steel plant[2]. The works at Irlam (west of Manchester) was located on the Manchester Ship Canal, and was an integrated iron and steel works. The 2 new companies were formed under the auspices of the Securities Management Trust, formed by the Bank of England to facilitate reconstruction of the iron and steel industry[3].

1961 Holding company for eight subsidiaries (one of which was presumably Lancashire Steel Manufacturing Co). Works at Warrington and Irlam. Employs 9,000 persons

1963 Consideration was being given to resiting the Warrington Works of Pearson and Knowles Engineering Works in order to achieve modernisation[12].

A new Rod & Bar Mill was opened in the early 1960s, with rolling mill equipment by Davy-United driven by electrical plant from the English Electric Co.

1967 One of the 14 largest steel companies, representing about 90 per cent of the UK's steel making capacity, brought into public ownership as part of the British Steel Corporation[13].

1971 It was decided to end iron and steel production as part of the industry's rationalisation, despite the site being highly profitable.

1973 British Steel sold its carbon- and mild-steel wire-making activities at Warrington (Rylands and Whitecross) and at Middlesbrough (Dorman Long) into a new company Rylands-Whitecross, jointly owned by Tinsley Wire Industries and British Ropes[14]