L. B. Holliday and Co 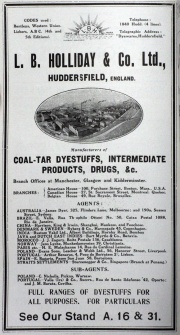 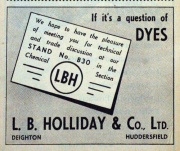 Holliday Dyes and Chemicals traces its roots to industrialist Read Holliday who was born in Bradford in 1809, the son of a wool spinner.

1830 Read started his own business at the age of twenty-one, buying waste liquors from the local gas works. He distilled ammonia in Huddersfield and sold it to textile mills for wool scouring.

Read and his wife Emma had five sons and three daughters. When Eliza died at the age of nine, Holliday became concerned about the environmental conditions of the Turnbridge area and built a new home in the countryside of Edgerton in 1853-54. The palatial family residence, with 34 rooms, was known as Lunn Clough Hall.

1864 The Holliday family had become the first producers of aniline and aniline dyes in the USA, when sons Charles and Thomas Holliday set up a factory in Brooklyn.

1868 When Read retired, his firm was England’s leading chemical manufacturer and the first international manufacturer of synthetic dyes. He turned the business over to his very capable sons Thomas, Charles and Edgar. The firm was now called Read Holliday and Sons.

1880 Robert Holliday (Read's son) patented a new dyeing process, known as azoic, which laid the foundation of the 20th century dyeing/printing industry but the firm failed to develop this product range and leadership in the fast growing azoic field eventually went to the Germans.

1890 The next year Read Holliday and Sons was converted into a private limited company with son Thomas Holliday as Chairman and Managing Director. The American business was also incorporated in the same year with Edgar Holliday as President.

By 1899 the firm was near bankruptcy because of competition from lower priced German dye manufacturers. Profits in the New York branch were also falling. However in the same year the Boer War started and the War Office granted a large contract to the firm in order to make picric acid for explosives.

1901 Lionel Brook Holliday, son of Thomas Holliday, joined the Board of Directors.

World War I forced Read Holliday and Sons to concentrate on explosives manufacture. By 1915 the shortage of explosives in Britain was a matter of grave concern. Lionel B. Holliday was recalled from France, where he was a Major in the Army. He was one of the few British technical men with knowledge of picric acid manufacture. On his return, he became responsible for a Government plant producing picric acid at Bradley. By the end of 1915 the plant was producing 100 tons of picric acid a week.

1915 Meanwhile British Dyes was formed by the takeover by the Government of Read Holliday and Sons. The Turnbridge works also produced TNT (11 million pounds), detonator compounds and picric acid during World War I.

1916 Major Lionel B. Holliday was not asked to join British Dyes but received £10,000 as his share of the money from the takeover. With this he bought land in Deighton, next door to the picric acid works he was running at Bradley. On this 30-acre site, which was the former Huddersfield racecourse, he set up the manufacture of dyes under the name of L. B. Holliday and Co Ltd.

1917 Major Holliday acquired a large number of German-owned British dye patents which were under Government control.

1918 L. B. Holliday and Co had 20 dyes in the line and was producing 50 tons of dye a month with a workforce of 20 men. Major Holliday recruited many of the workers, customers and processes who had previously been at Read Holliday and Sons, and this caused lasting friction between his company and British Dyes. British Dyes acquired a site at Dalton and so became neighbours of Major Holliday's Deighton works. The new dye works built at Dalton had severe start-up problems.

1919 British Dyes of Huddersfield merged with Levinstein in Blackley to form the British Dyestuffs Corporation, which later became ICI. The Dalton Works’ problems were gradually resolved and the site became an important part of the ICI dye business.

1920 L. B. Holliday and Co prospered under the leadership of Major Holliday. A Canadian branch office and warehouse were established in Montreal in 1920.

Following World War II, the Major took advantage of import barriers to expand the business. In the late 1950s there were between 800-900 employees on the Leeds Road site.

Major Holliday was well known as an owner and breeder of racehorses. He was not a betting man and never put any money on his horses. He died in 1965 at the age of 85.

Over the years the company built a reputation for the quality of their dyes and chemical intermediates.

1970 A new azo plant was built at a cost of £2 million. By the late 1970s, the firm had grown to become the largest privately-owned dye manufacturer in the world.

Hollidays was still very dependent upon producing dyes for the textile market. The boom in synthetic fibres in the late 1970s resulted in many dye companies expanding capacity, lowering prices and profits. The company was sold to Terry Brain, a Jersey-based businessman, in 1982 when the name was changed to Holliday Dyes and Chemicals Ltd. (HDC).